7 things I think about the Philadelphia Eagles 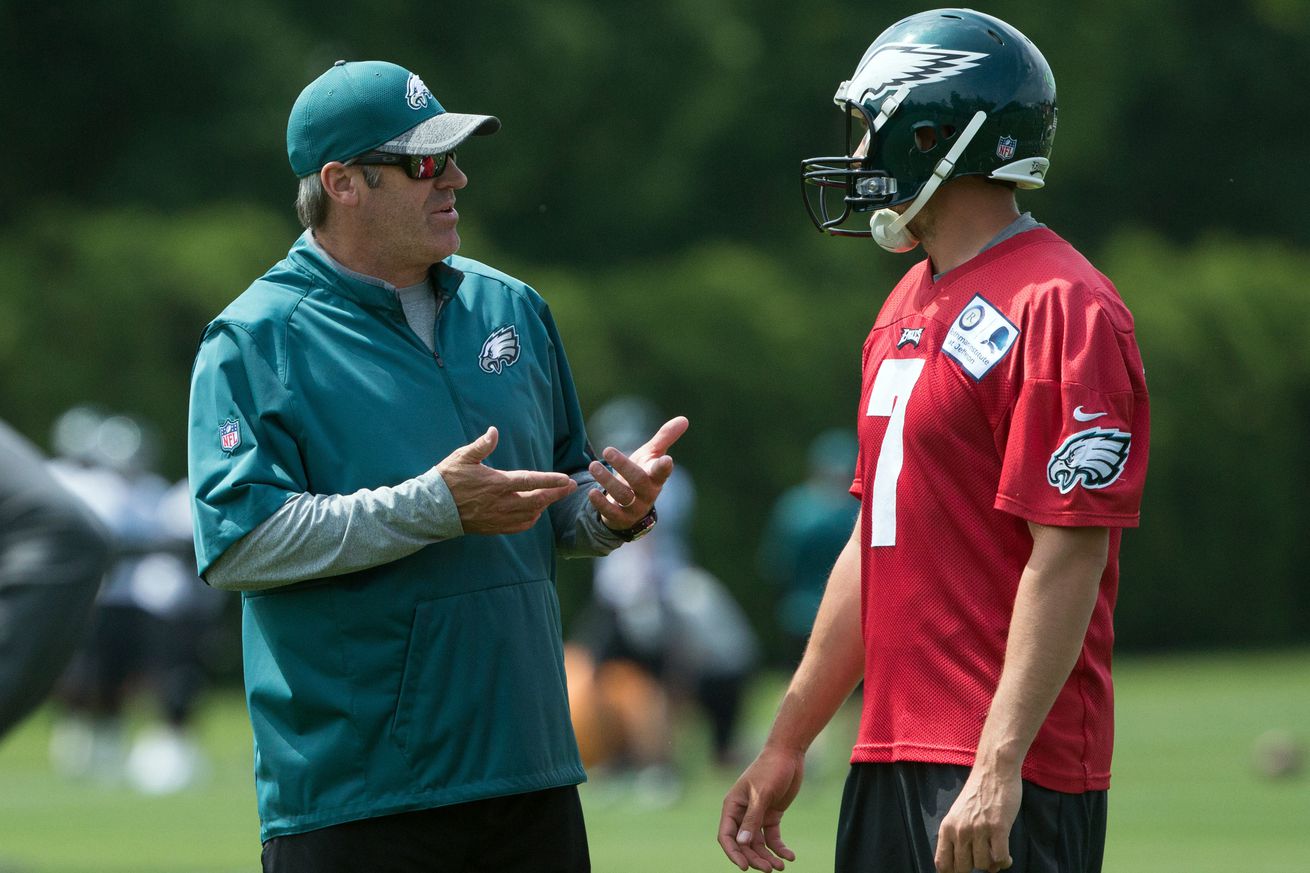 As Eagles training camp is about to begin, here's what's on my mind.

Philadelphia Eagles training camp begins tomorrow! We've (nearly) made it through the slowest part of the offseason. Before camp officially kicks off, allow me to share seven thoughts on my mind.

1) I think the Eagles' quarterback situation is fluid

No better place to start this list than the quarterback position. It's easily the most intriguing angle with this team right now. If Doug Pederson's word is any indication, though, the situation is cut and dry: Sam Bradford is the starter, Chase Daniel is the backup, and Carson Wentz is set to be inactive on game day. There's a very good chance Pederson isn't lying and that's how it all plays out to start the season.

But how long will that exact setup last? There are so many variables here. The injury-prone Bradford could easily get hurt. If gets injured early in the season, Daniel will probably fill in for him. But what if he get hurt later in the season and the Eagles are already out of the playoffs? It has to be Wentz time then, right? But what if he gets hurt and the Eagles are still in the mix? Is it Daniel going in there? Even if Bradford does stay healthy, he's not going to have a long leash this year. The Eagles don't have much reason to keep playing him if he plays as poorly to start the season as he did in 2015.

Maybe Bradford stays healthy and plays well. If that's the case, Wentz could spend the whole season without even being active for a single game. That's not the most likely situation, but it doesn't seem impossible.

Speaking of not impossible, there has to be a chance Bradford gets outplayed by Daniel and/or Wentz this preseason. I don't expect that to happen because training camp and preseason is where Bradford shines, but what if it does? It's going to be especially hard for the Eagles to sit Wentz if he looks awesome this summer and Bradford is struggling.

There are so many different ways the Eagles quarterback situation could shake out. The only thing we know for sure is that Wentz will eventually be the starter. Just a matter of time.

2) I think this is a weird year

The Eagles' fluid quarterback situation makes this season a weird one. The Eagles aren't really expecting to compete for a championship this year. A lot of the moves made this offseason were about building a core for the long-term, as Howie Roseman indicated. At the same time, this isn't truly a rebuilding year. Philadelphia kept Bradford because they wanted to stay competitive in a weak NFC East. I think the ceiling of this year's team is winning the division at 8-8. I think the floor is 5-11. For Eagles fans, the hope is that the team isn't a disaster this year and they show progress that can be built upon moving forward.

3) I think Doug Pederson has a lot to prove

The Pederson hire was met with a lot of skepticism for a reason. He's largely an unproven commodity. It's not like teams, outside of Philadelphia, really wanted him all that badly, either. That could end up being meaningless, of course. But sometimes I can't help but think of how the Eagles' coaching search was flawed. The Eagles didn't seem to be in love with Pederson after they first interviewed him. They reportedly chased hard after Ben McAdoo and Tom Coughlin after meeting with Dougie Fresh.

Pederson has a chance to start proving his doubters wrong this season. A good place to start is by fixing an offense that was clearly broken last season under Chip Kelly. Philadelphia finished 2015 ranked 18th in points per play, 23rd in yards per play, and 26th in offensive DVOA. The Eagles don't have a ton of talent on offense, so Pederson's work is cut out for him.

Pederson's performance will be evaluated beyond his offense. We'll need to see how he handles other pressures of being head coach, such as managing the locker room, in-game adjustments, clock management (everyone's favorite), etc.

4) I think the Eagles defense will be good, but it could take some time

The Jim Schwartz hype is real. Eagles fans are easily more confident in the team's defensive coordinator (as shown in this poll) than they are in Pederson. Earlier this offseason, I wrote about how the Eagles have the potential to be very good under Schwartz.

There are some reasons for optimism. Philadelphia's pass rush should be improved with Fletcher Cox, Vinny Curry, and Brandon Graham returning to the 4-3. The linebacker corps of Jordan Hicks, Nigel Bradham, and Mychal Kendricks should be good if they can stay healthy. Malcolm Jenkins and Rodney McLeod combine to form one of the NFL's best safety tandems. The cornerback picture is sketchy, but Eric Rowe has potential and Leodis McKelvin has looked good so far this spring.

I know some people get scared about the wide nine, but the fact is that this is a much different situation from 2011 and 2012. The Eagles have much better defensive personnel than they did back then. Schwartz is infinitely more qualified and accomplished as a defensive coordinator than Juan Castillo.

The Eagles should be at least an above average defense this year. I'm going to conservatively say they finish something like 13th in yards, 12th in points, and 10th in DVOA. So just on the cusp of being a top 10 defense.

Though the potential is there, Eagles fans may need to be patient for it all to come together. It could take time for some players to get used to playing in the 4-3 again after spending time in the 3-4 for the past three years.

Another thing worth considering is that some players might struggle as ideal fits in the new scheme. For as much as the wide nine will play to the strengths of players like Cox and Curry, it could expose weaknesses of others.

5) I think the running back position is the biggest concern

The Eagles have a lot of concerns. To me, running back is the biggest one. It's such a sketchy situation. Ryan Mathews is bound to get hurt. Darren Sproles isn't a full-time player. As a rookie, Wendell Smallwood probably isn't best suited for a full-time role either. It remains to be seen if Kenjon Barner or Byron Marshall are even good enough to make the final roster. The Eagles don't have a lot of talent at this position, and that's just not very usual. Philadelphia fans have been spoiled with the likes of LeSean McCoy, Brian Westbrook, etc. over the years.

The concern isn't just about the lack of talent. It's about how an ineffective running game could tank the entire offense. Despite Andy Reid being known as pass happy, the Chiefs ran the ball a lot over the past three years. Kansas City ran the sixth highest percentage of run plays in 2015, the ninth highest in 2014, and the 13th highest in 2013. The Chiefs also liked to play ball control. They ranked top six in time of possession twice in the past three seasons. One would expect the run game to be important to Pederson.

The good news is that this stable of running backs is going to have a hard time being worse than DeMarco Murray was last season. It's very low bar to clear. The success the Chiefs had with unheralded running backs like Charcandrick West and Spencer Ware last season also shows they didn't just need an elite talent like Jamaal Charles to be effective.

The Eagles will have a chance to upgrade this position next offseason. The 2017 NFL Draft is supposed to feature a lot of good rushing talent, so that works out nicely.

Again, running back is just one of many concerns the Eagles have. The Birds desperately need someone to step up at wide receiver. Jason Peters' reliability at left tackle is seriously in question. Philadelphia lacks depth at numerous positions on the roster. This team has some nice pieces but they're very much a work in progress.

For those who read the site regularly, you already know I'm skeptical of Roseman. I wrote about how the Eagles' decision to reinstate him instead of hiring a real general manager was very concerning. I'm still hardly all-in on Roseman, but I do have to give him credit for what was seemingly an overall good offseason. While the head coaching hire was questionable, the staff around Doug Pederson appears to be strong. Re-signing home grown talent to beat the free agent market prices was important. The free agency signings were agreeable. Roseman landed a few encouraging personnel hires in Joe Douglas and Andy Weidl.

More importantly than anything, however, Roseman finally stuck his neck out and went all-in on a quarterback. The Wentz trade will ultimately make-or-break Roseman's tenure in Philly, which is how it should be. If things go wrong, he won't be able to dodge blame like he has in the past. Similarly, he'll get the credit he deserves if he ends up being right about Wentz.

7) I think the Eagles won't miss Chip Kelly this year

Plenty of Eagles fans approved of Kelly getting fired late last season, but some thought he deserved one more year. I don't think Eagles fans will be feeling the same way this season. The 49ers are probably going to be very bad. First of all, they were lucky to even get to five wins last year. I don't know how they did it. San Francisco had the worst overall DVOA ranking and they ranked second to last in point differential. They were worse than their record indicated.

Blaine Gabbert -- Blaine freaking Gabbert -- has a real chance to be Kelly's starter this season in a division that features two of the best teams in the NFC: the Seattle Seahawks and the Arizona Cardinals. I don't think Kelly is going to find early success in San Francisco.

Maybe the 49ers are so bad that they get the No. 1 overall pick and they draft a quarterback who turns out to be a stud. Maybe Kelly then finds a way to turn around the 49ers in the future. Until then, I don't think the Eagles will be missing Kelly, if ever at all.

7 things I think about the Philadelphia Eagles