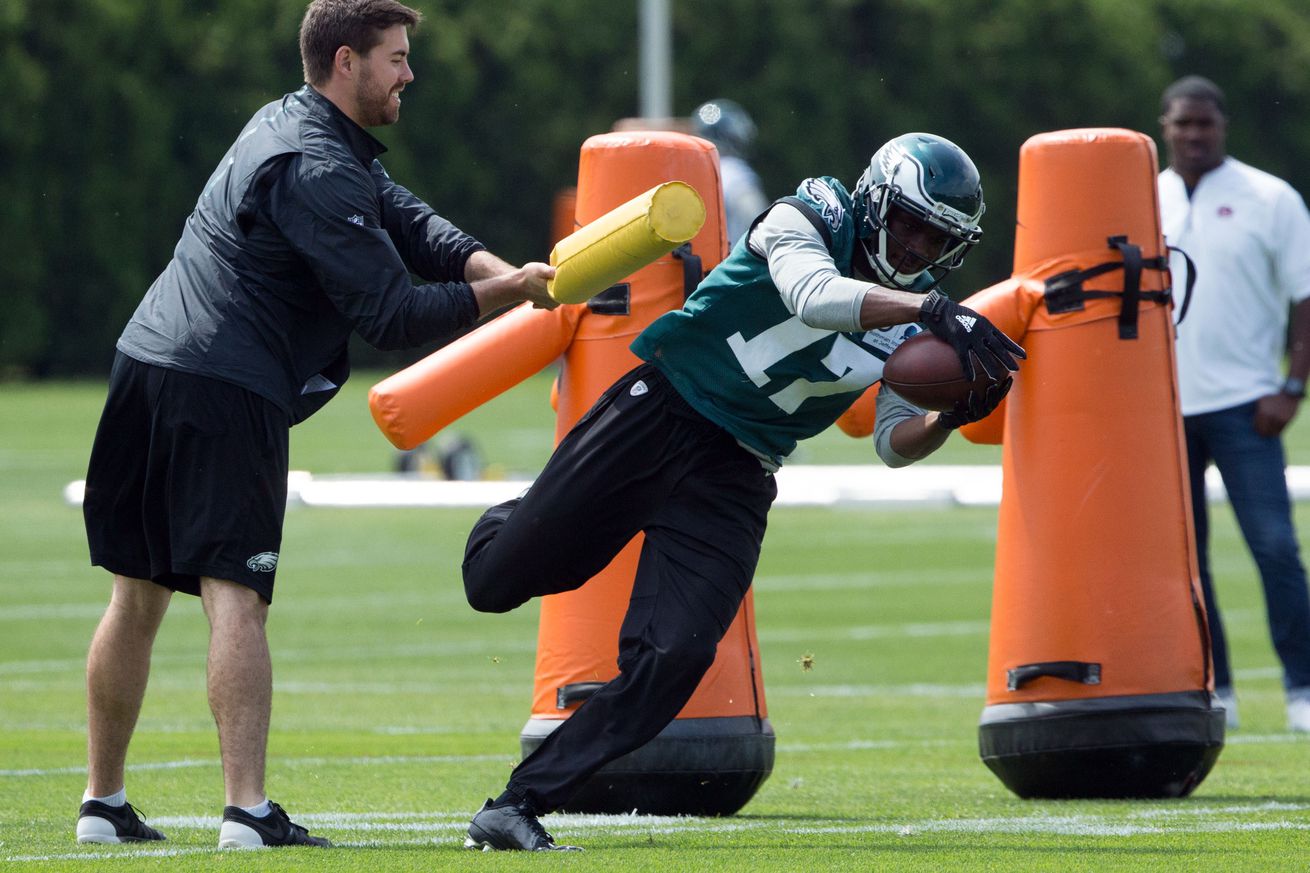 Philadelphia Eagles news and links for 5/30/16.

Jordan Matthews explains Nelson Agholor's offseason purchase - NJ.com
Eagles wide receivers were plagued by costly drops last season and the lone first-round draft pick in the group decided to do something about it over the offseason. "Nelson [Agholor] took some of that first-round pay check," Eagles wide receiver Jordan Matthews said following Tuesday's OTA practice at the NovaCare Complex, "and he bought a JUGS machine. He's invited the guys over to his house to work on it, make catches on it and do whatever they want to do.

A focus of Eagles defense will be stopping tight ends - PhillyVoice
During the Chip Kelly era in Philadelphia, the Eagles targeted safeties who had the ability to drop down into the slot and cover receivers man to man. It is why they signed Malcolm Jenkins, a former cornerback, in free agency, and it is what made Walter Thurmond, another former corner, a solution on the back end as well. While the Eagles have made the switch from a 3-4 defense under Kelly and Billy Davis to a 4-3 under new defensive coordinator Jim Schwartz, it appears the Eagles will still put a high priority on safeties who can cover.

Bounce Back - Iggles Blitz
Mychal Kendricks was disappointing last year. Even he agrees with that. Some people try to rip him apart for how he played. I think those people must have missed the 2009 Eagles LBs. That was some bad LB play. Kendricks certainly had his share of bad plays, but he also made some good ones. He did have 3 sacks, one FF and 6 TFLs. In 2009 the entire Eagles LBs corps totaled 4.5 sacks and 3 FFs. No single LB had more than 3 TFLs.

Agent's Take: 12 players in line for big contract extensions before August - CBS Sports
Philadelphia's only signing priority that hasn't inked a new deal is Cox, who is making the transition to 4-3 defensive tackle under new defensive coordinator Jim Schwartz. Cox's agent is Todd France. He also represents Marcell Dareus, who signed a six-year, $95.1 million extension (worth a maximum of $100.35 million through salary escalators) with the Buffalo Bills days before the start of 2015 regular season. That contract contains $60 million in guarantees, the new benchmark for a defensive player. France being adamant about the Eagles topping Dareus' deal was expected at the outset of negotiations. There have been Philadelphia media reports of Cox's camp rejecting an offer containing $60 million in guarantees. France quickly refuted this notion.

Brandon Graham's glad Jim Schwartz is here - Inquirer
Few members of the Eagles have fond memories of that 2012 season, which was Reid's last in Philadelphia. Graham, however, has valid reasons for embracing his accomplishments that year in a 4-3 scheme similar to the one that will be run once again by new defensive coordinator Jim Schwartz. Before 2012, Graham was often described as a wasted first-round draft pick. He had been selected 13th overall out of the University of Michigan in 2010 but managed just three sacks in 13 games before suffering a torn knee ligament that ended his rookie season and delayed the start of his second season.

NFL Power Rankings 2016: Early look at where teams stand as OTAs begin - SI.com
24) The transition into the Chip Kelly regime went well—the Eagles finished 10-6 and won the NFC East. How smooth the transition out is, after two disappointing years, relies on what Jim Schwartz can do with the defense and how Doug Pederson settles his cluttered QB situation.

Eagles mailbag: Jordan Matthews, injury concern, leading rusher - CSN Philly
Now, I didn't just pick the best players, I picked the best players with the biggest drop off to their backups. So on offense, it's Jason Peters and on defense it's Jordan Hicks. The scary thing: it wouldn't be shocking if either of these two go down in 2016. If Peters goes down, the Eagles will be fine at left tackle, because Lane Johnson will shift over. But that means either Dennis Kelly or Halapoulivaati Vaitai will come in. We all know what's happened in the past when Kelly comes in, and Vaitai is just a rookie. Not a ton of great depth at tackle.  As for Hicks, we saw what happened to the defense when he went out last season. And this year, the team has virtually no depth at linebacker. If Hicks went down, either veteran special teams player Najee Goode or rookie Joe Walker would need to fill in. Yikes.

Anatomy Of A Play: The Sucker Play - PE.com
Want to check out one of the cooler looking pass plays in football? Eagles Game Plan analysts Ike Reese and Ross Tucker break down the 'Sucker' concept for you in today's Anatomy Of A Play ...

NFC East Roundup: McAdoo ‘Turning Heads’ - Birds 24/7
For those in need of a quick fix, let’s take a spin around the NFC East to see what’s going on with the rest of the division.

5 NFL players proving NBA players aren't the only athletes with style - SB Nation
No one's quite on Russell Westbrook's level -- yet.