The Linc - Eagles dubbed the best fit for Jaylen Waddle 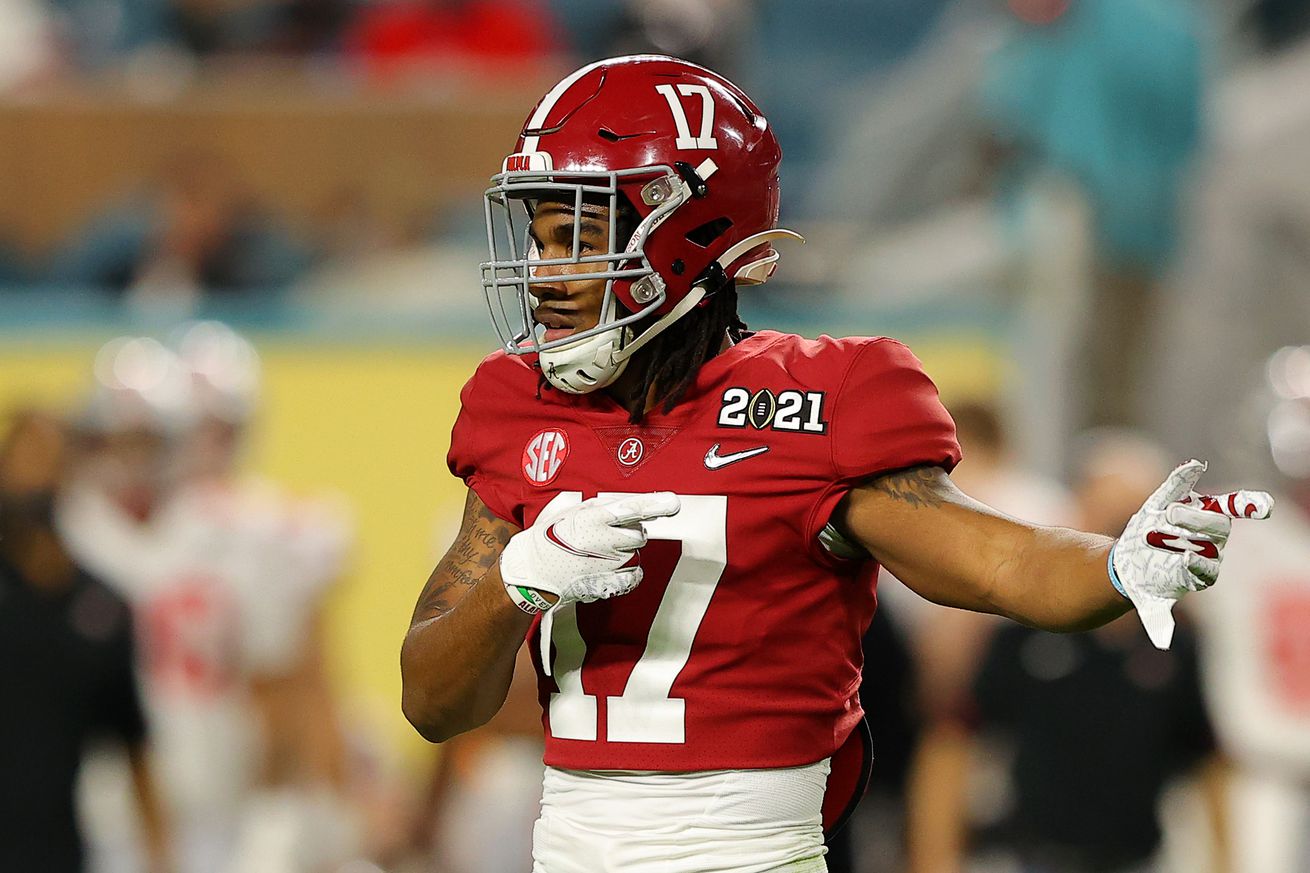 Philadelphia Eagles news and links for 4/8/21.

Best team fits for wide receivers in the 2021 NFL draft: Landing spots for Ja’Marr Chase, DeVonta Smith, Jaylen Waddle, Kyle Pitts - ESPN+
Jaylen Waddle, Philadelphia Eagles. If the Eagles don’t go after a corner in Round 1, Waddle should be the guy they set their sights on because of his explosive traits as a motion and movement target for second-year quarterback Jalen Hurts. With new coach Nick Sirianni and offensive coordinator Shane Steichen in Philly, Waddle can play the T.Y. Hilton role in this system. Run the crossers in the mesh concept, the dig routes, the slot fades. Plus, given Waddle’s sudden quickness, he can also be schemed on screens and fly sweeps. In this situation, the Eagles add another target with field-stretching speed after drafting Jalen Reagor in the first round last year. Waddle is more refined as a route runner than Reagor, which would give Hurts a target who can create both second- and third-level separation.

2021 NFL Draft: Ranking each position group in this year’s class - NFL.com
1) Wide receiver. For the second year in a row, the receiver position appears to be the deepest in the draft. For what it’s worth, I actually have the top three receivers in 2021 ranked above the top three receivers from last year, both as a group and individually. Ja’Marr Chase, DeVonta Smith and Jaylen Waddle all have game-breaking elements to their play, while targets like Elijah Moore and Kadarius Toney are going to be nightmares to cover from the slot. It’s also worth noting the amount of size/speed prospects with good upside that will be available on Day 3 of the draft.

This Eagles offseason has no juice - BGN
Unfortunately, since the firing of Doug Pederson, the trade of Carson Wentz and the hiring of Nick Sirianni, it’s also been about the biggest news from the organization since free agency began last month, and the next few months don’t appear to hold anything more exciting for us, either. I recently encountered a bit of Eagles-related writer’s block and I couldn’t figure out why. I now understand the reason... this Eagles offseason has had no juice.

Locker Room Livestream Replay: Do you like Nick Sirianni’s energy‪?‬ - BGN Radio
Brandon Lee Gowton and Shamus Clancy are joined by former BGN Radio co-host Matt Dering and other listeners to talk about the latest on the Eagles! Topics discussed include Nick Sirianni’s energetic film breakdown, reasons for optimism in 2021, and much more.

Smart Moves - Iggles Blitz
The tape shows a solid player, but nothing special. There is a reason a 26-year old LB coming off a career year doesn’t have much of a market. He doesn’t have great size or speed. He’s not special in any way. His tackling can be a bit sloppy. There are times when he reaches rather than aggressively wrapping up. While he isn’t Seth Joyner or Byron Evans, Wilson is a good addition to the Eagles. He fits in terms of age and price. Wilson is versatile. He can play up on the LOS, in the middle or out in space. He will know the scheme or at least parts of it. He also can help young players like Davion Taylor and Shaun Bradley develop. Wilson made the Vikings as a UDFA. He began as a STs player, then got mixed in as a starter when needed and finally started a full season last year. This is a guy who earned everything as he made his way up the NFL ladder. And he did that as part of a good defense. I think the Eagles will play Wilson at WLB.

Eric Wilson to sign with Philadelphia Eagles - Daily Norseman
Wilson signed with the Vikings as an undrafted free agent out of Cincinnati in 2017 and spent four seasons with the Vikings, never missing a game during his time in purple. He started out as a special teamer and slowly got more work on the defensive side of the ball. This past season, thanks in large part to the injury suffered by Anthony Barr, Wilson started 15 games for the Vikings. He racked up three interceptions and eight passes defended along with a team-leading 122 tackles. With Barr and Eric Kendricks both on big contracts and the team just having signed Nick Vigil in free agency, the writing was sort of on the wall that Wilson would probably be moving on, and that’s exactly what has happened.

49ers sign QB Nate Sudfeld to a one-year deal - Niners Nation
The San Francisco 49ers today announced they had signed QB Nate Sudfeld to a one-year deal. Sudfeld (6-6, 227) was originally drafted by the Washington Football Team in the sixth-round (187th overall) in the 2016 NFL Draft. After being inactive for all 16 games of his rookie season, Washington waived Sudfeld on September 2, 2017, and he was signed to the Philadelphia Eagles practice squad the following day. Over the previous four seasons with Philadelphia (2017-20), he appeared in four games and completed 25 of 37 passing attempts for 188 yards and one touchdown.

Report: Titans to add Jim Schwartz to coaching staff - Music City Miracles
My first thought was that the Titans would be bringing in Romeo Crennel based on Crennel and Vrabel’s time together with the Texans, and the fact that Crennel is a 3-4 guy. Schwartz has always been a 4-3 guy. I like the fact that Vrabel is bringing Schwartz in. I was really afraid that Vrabel was 100% convinced that the players were completely at fault for what happened last year. Being willing to bring in someone with Schwartz’s resume tells me that Vrabel is at least willing to take a complete look at what went wrong last season.

Futures: LSU WR Ja’Marr Chase - Football Outsiders
What has propelled Chase beyond his peers for many analysts is not just how strong his positive traits are, but how unconcerning his negative traits are. For one, Chase does not have the same size and frame concerns that both Alabama wide receivers, DeVonta Smith and Jaylen Waddle, are facing. Chase is not lacking in any particular athletic area either. Though it is fair to say he has no athletic trump card, Chase is plenty fast, explosive, strong, and smooth for 6-foot, 201 pounds.

Overshadowed LSU wide receiver Terrace Marshall ‘ready to eat’ - Big Blue View
Terrace Marshall knows most NFL draft scouts aren’t focusing on him when it comes to LSU wide receivers. The lion’s share of attention goes to freak athlete Ja’Marr Chase, the 2019 Fred Biletnikoff Award winner for the best receiver in college football. Chase took 2020 off after hauling in 1,780 receiving yards and 20 TDs, leaving Marshall a bit more room to shine. In 2019, Marshall was third fiddle behind both Chase and current Minnesota Vikings 1,400-yard receiver Justin Jefferson. But the 6-foot3, 200-pound Marshall Jr. is a good, fast receiving prospect in his own right.

Expected Drafted Player Snaps Over Rookie Years - Over The Cap
Basically the teams in the top right had a lot of picks and did really well with those picks while those in the top left hit a home run despite a limited quantity of picks. For those on the bottom the results have been poor in the draft. The avg. line isn’t at zero because of the method I used to calculate the projected snaps which wasn’t going to zero out.

Here’s the link. It’s worth a read. The results shouldn’t be surprising. Slightly below average from 11-20 because Kelce, Cox, Johnson, Ertz, and Foles. Poor draft record from 17-20 because those drafts, save for possibly 2018, have been dumpster fires.https://t.co/c8TRR5YpU4

Is It Working Yet? – Doing the Drugs Part IV

The Linc - Eagles dubbed the best fit for Jaylen Waddle