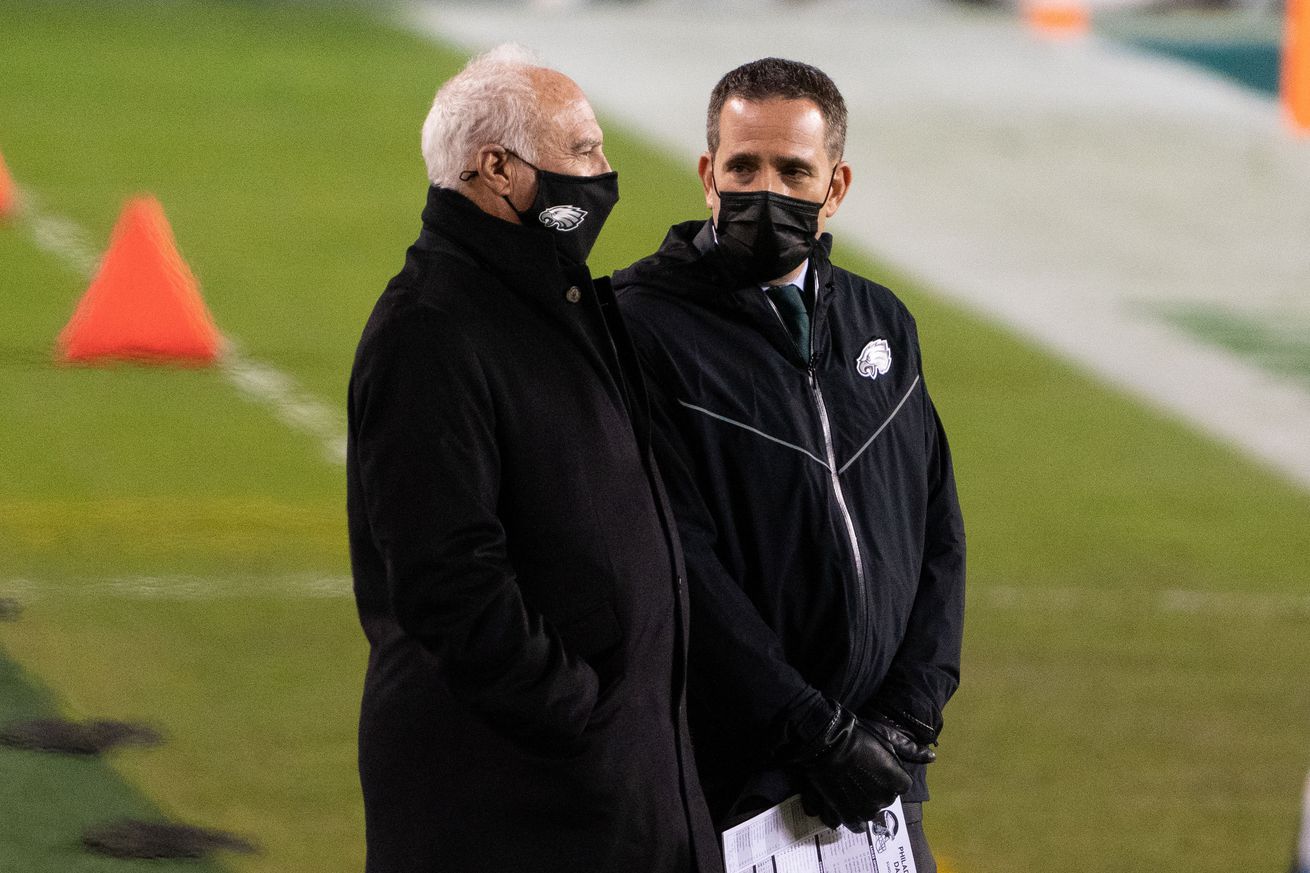 Would Jeffrey Lurie ‘blow things up’ if this season continues to spiral? Joe Banner doesn’t see it - Inquirer
I would be very surprised if the second thing happened. In fact, I would be completely shocked. That doesn’t mean there couldn’t be any changes. But kind of blowing it up and making major massive changes, I don’t even think that’s on the table. That doesn’t mean he won’t be frustrated. That doesn’t mean he won’t be introspective. But he also knows that he does have a group that’s produced some pretty significant success. Winning a Super Bowl. Three straight playoff appearances. Winning 30-plus games in three years. Granted they’ve benefitted from weaknesses in the division. But that’s not something you walk away from easily. I understand the frustration. They are headed in the wrong direction. And Jeff will recognize that. But I would be very, very surprised if he blew anything up. As far as Wentz, everything I know, and most of it comes from people in the building, is that suggestions that his work ethic is a problem is just misguided. There obviously are problems, and he’s not playing well. And you could argue about what the cause of that is. And definitely, part of that is just him. But I’ve never heard anyone, including people that have been very critical of him at times, mention his work ethic in any way but a positive manner.

Eagles vs. Browns Game Preview: 6 questions and answers with the enemy - BGN
I have my fingers crossed that a few of the players on the reserve/COVID-19 list will be able to play. Assuming they do, I will take the Browns to win, thanks to the commitment they’ll have to the running game and run defense not being the Eagles’ strength. The Browns’ defense has struggled with high-caliber quarterbacks this year, but I imagine they’ll welcome the sight of Carson Wentz, especially with Myles Garrett trying to attack Jason Peters to disrupt some plays. I’m picking the Browns to win this game 28-20. As far as season expectations go, it’s a bit frustrating that right now, even with a 7-seed system and a 6-3 record, Cleveland would miss the playoffs. I’m hopeful that the Browns will be able to take advantage of facing the Jaguars, Jets, and Giants to help them get to 10 wins, which I think will be enough for the playoffs. I’ve been blogging for Dawgs By Nature since 2006, and haven’t covered one single playoff game yet.

The Kist & Solak Show #208: A Very Sunny Browns Preview - BGN Radio
Michael Kist & Benjamin Solak get nerdy and in-depth with their Eagles-Browns preview PLUS thoughts on the RB committee approach & much much more! Powered by SB Nation and Bleeding Green Nation.

Eagles mailbag: Should we maybe let Jalen Reagor breathe? - PhillyVoice
Should the Eagles have taken Jefferson? Yes, clearly. He was the better prospect, and I think that even the Eagles thought that he was the better prospect. However, they drafted Reagor instead of Jefferson for three reasons: He possessed a trait (speed) that they desperately needed. They felt that finding an outside receiver with speed was more difficult to find than a high-volume slot guy, which is what they had Jefferson pegged as. They thought Reagor’s traits would be a more useful fit in the Eagles’ scheme. It was a bad pick in the sense that they got the Jefferson evaluation wrong. Some in the draft community felt that Jefferson was a low-ceiling slot receiver, because that’s primarily where he lined up during his extremely productive final season at LSU. Others felt that his skills would translate outside, where he was less successful early in his career in college when he was still a teenager. The Eagles thought he was a high-volume slot guy, which in their opinion was not more valuable than an outside receiver in a west coast offense. They erred there, bigly. As Jefferson has shown, he can play anywhere, and he is already tearing up the league. He has 42 catches for 762 yards (18.1 YPC) and 3 TDs, and is a star in the making.

Sixers and Eagles’ futures are defined by their front offices - NBCSP
I just need the Eagles season to be over with for my own well-being. I can’t get enough of the Sixers right now though and am itching for the first game of the year. A tale of two teams. Look at the Phillies. President Andy MacPhail is in lame duck situation. Maybe fate swings and Theo Epstein becomes their Morey, but for time being, I worry they’re once again wasting a heavy-hitting cast of position players with poor pitching. I so desperately want to watch good baseball. It even goes for the Flyers too, who followed up a thrilling regular season run with a tepid offseason. The answer to winning over the city is ultimately simple: have a person calling the shots that knows what they’re doing. The Sixers have possible the best in the sport in that regard. The Flyers exist in limbo with Chuck Fletcher. The Eagles and Phillies are rudderless ships in the Schuylkill River.

NFL Week 11 game picks, schedule guide, fantasy football tips, odds, injuries and more - ESPN
Bold prediction: The Browns will score a defensive touchdown. Outside of last weekend’s game against the Giants, Wentz has been very giving with the football, turning it over 16 times. Cleveland is tied for fourth with 15 takeaways and will take one to the house on Sunday.

Eagles-Browns cheat sheet: Predictions, matchups to watch, lineup news & more - The Athletic
Berman: Last week’s loss was bad and continued a season of inconsistency and underachievement. This is a game the Eagles can win, and Garrett’s absence works to their advantage. But even before the bye week, they narrowly clawed past two losing teams at home. It’s a stretch to think they’re better than the 6-3 Browns when playing on the road. The Eagles must find more firepower on offense, and Sanders is the key. They should be able to generate more productive drives if he can improve in the passing game and log a steady dose of carries. Dallas Goedert, Fulgham and Reagor are better than they played last week. And the defense must prove Schwartz accurate in how it plays against running backs. It’s going to be a close game and it wouldn’t surprise me if the Eagles won, but I need to see it to believe it at this point. I’d take them to cover, though. Browns 24, Eagles 23.

COVID-19 changes landscape on Friday for Eagles - PE.com
Later on Friday, the Eagles announced that Passing Game Coordinator/Quarterbacks Coach Press Taylor and Wide Receivers Coach Aaron Moorehead would not be available for the Browns game due to COVID-19 protocols mandated by the league, and that their duties will be assumed by other members of the coaching staff. Adjustments, again. Which team adjusts the best? Day to day in the league, the dangers are clear and they are present. COVID-19 is running rampant through the United States and the NFL is doing everything it can do to minimize the impact. But things change on a daily basis. The Eagles are like every team, required to be nimble and transparent and adaptable.

Browns place Myles Garrett on reserve/COVID-19 list - Dawgs By Nature
The loss of Garrett is a major blow to Cleveland’s defense. Garrett is leading the NFL with 9.5 sacks, while the rest of the Browns have combined for 12.5 sacks. Defensive coordinator Joe Woods is going to have to quickly find a way to pressure the quarterback in Garrett’s absence, with defensive ends Adrian Clayborn and Porter Gustin in line for more playing time. Garrett is the fifth Browns player to land on the reserve/COVID-19 list in the past week. He joins offensive lineman Chris Hubbard and fullback Andy Janovich as players who have tested positive, while right tackle Jack Conklin and kicker Cody Parkey are both on the list after being identified as high-risk close contacts of someone with the virus.

NFC East Notebook: Which team has the easiest path to a playoff berth? - Big Blue View
The Eagles are the favorite to win the division entering Week 11, but they also have the most difficult schedule remaining on the season at .571. Their next five opponents have records above .500 and no team has more than three losses. Philly’s last two games of the season are against the Cowboys and Football Team. These two matchups are winnable, but if the Eagles can’t find another win in their upcoming five-game stretch, they will enter their final two games of the season with a 3-10-1 record.

Poll: What will the Dallas Cowboys record be by this time next week? - Blogging The Boys
The Cowboys visit the Minnesota Vikings on Sunday afternoon and then will have a quick turnaround before they host the Washington Football Team on Thanksgiving Day. Of course, one week after that they will visit the Baltimore Ravens for another Thursday game, but for the purposes of today’s conversation we are focusing on just the next two games. Why are we only focusing on a couple of contests? As we talked about earlier this week, the Cowboys could theoretically end November in first place in the NFC East. That is the quickest path to their season dramatically changing and it involves the next two games they are playing. Needless to say things could look very different exactly one week from now.

Saints place QB Drew Brees on injured reserve - Canal Street Chronicles
The Saints’ future Hall of Famer has suffered compounded chest injuries over the last couple of games including multiple rib fractures to both sides and a collapsed lung. Despite his early and very optimistic return timeline being 2-3 weeks per Dan Graziano of ESPN, it seemed like a very long shot that would indeed be the case. With Brees being sent to injured reserve, he will now miss at least three weeks with the shortened IR rules for the 2020 season. Meaning his earliest possible return would be on the road against the Philadelphia Eagles on December 13th. Though returning to the field could take additional time if needed.

Tips for Preparing for Retirement