The Linc - The Eagles have some bad juju going on 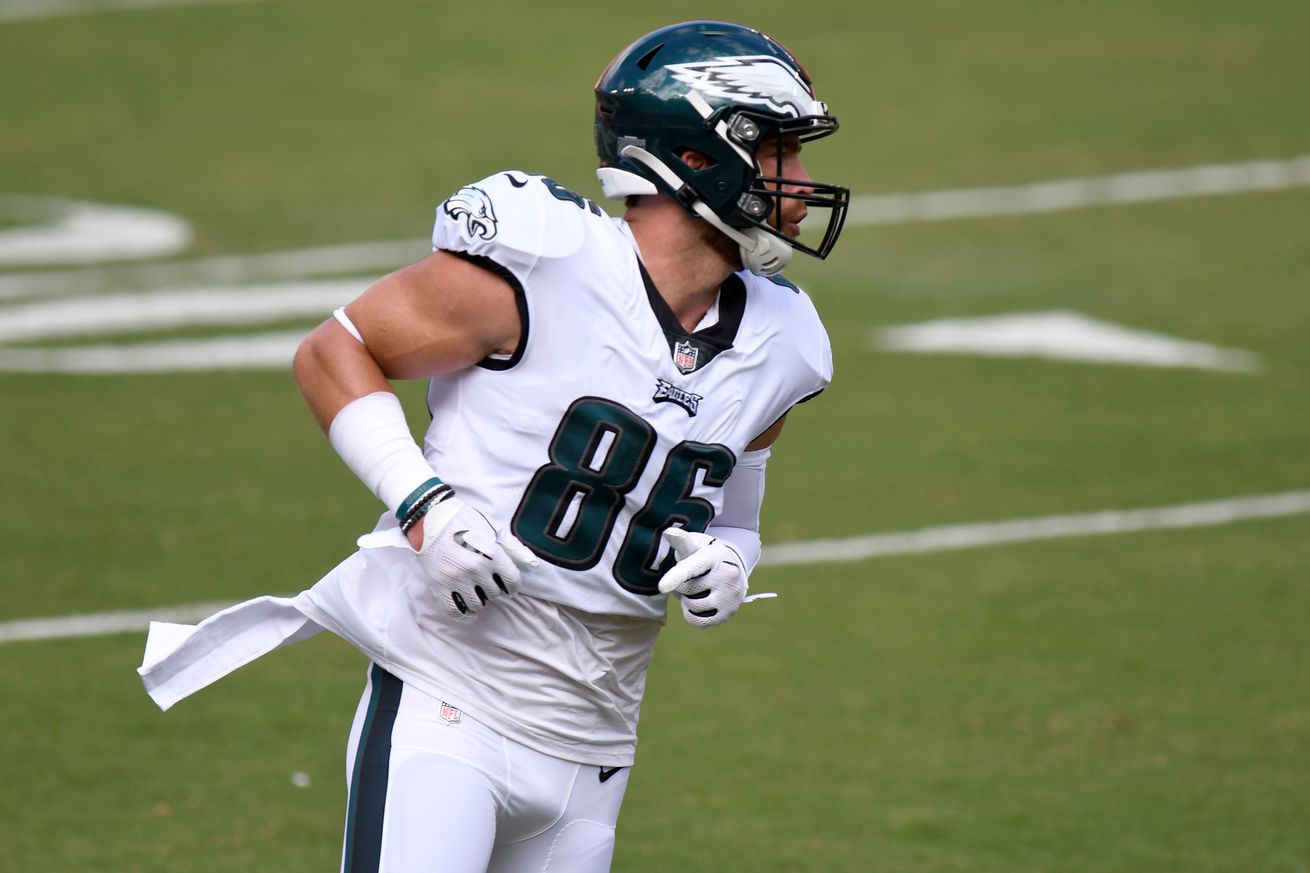 Philadelphia Eagles news and links for 9/15/20.

NFC Hierarchy/Obituary: Week 2 - PhillyVoice
10) Eagles (0-1): Forget the mess that occurred on the field on Sunday. It’s what is happening off the field that feels more alarming. The Eagles pride themselves on the idea that they have some sort of amazing locker room culture, but there’s evidence mounting that things aren’t awesome, or are threatening that cohesiveness. [...] 1) Zach Ertz went out of his way to make sure it was known that he is unhappy with his contract, and he reportedly had a heated exchange with Howie Roseman in front of teammates. 2) After Andre Dillard got hurt, Jason Peters refused to move from RG to LT without a pay raise. 3) The team was outright lying about the severity of injuries during training camp, which is something that players often don’t appreciate, as players who are legitimately hurt appear to be dogging it when they’re “day-to-day” for weeks or even months. [...] The potential destructiveness of each of the above points can be debated, but there’s undeniably an accumulation of issues brewing. It just feels a lot like there’s some bad juju associated with this team.

The Eagles opened as favorites against the Rams but that quickly changed - BGN
Hours after the Philadelphia Eagles blew a 17-point lead to the Washington Football Team, they opened as 2.5-point favorites against the Los Angeles Rams in Week 2. It didn’t take long for that to change. The line has since shifted to the Rams being 1.5-point road favorites. Clearly, a lot of bets were coming in on Los Angeles.

Episode No. 2 of The ODDcast is here!

Ranting about the Eagles and Carson Wentz, hyping up my most favorite player in the NFL, MNF recaps, and a whole lot more.

Plus, @StatsOnFire roasts a bunch of coaches.

The Long Haul - Iggles Blitz
I came away feeling the Eagles problems were fixable. Adding Lane Johnson and Miles Sanders to the offense will help. The run game will get going. The Red Zone defense should get better. Maybe I’m being overly optimistic. This team is a mystery with new faces and a very weird offseason. I just believe a team with Pederson, Wentz and a good defense should get things sorted out.

Time is now for the Eagles’ Carson Wentz to turn the corner - ESPN
Vick’s public response to the calls oscillated. He made a promise to the fans before the 2012 season he would make a conscious effort to protect himself, and then quickly abandoned that stance because it felt restrictive and unnatural. In the end, all that came from the conversation was wasted breath. Vick was who he was. The way he was wired as a quarterback made him both great and susceptible to injury and absence, and the team’s fate was tethered to whether the coin landed on heads or tails. Which brings us to Eagles starting quarterback Carson Wentz, whose performance in a distressing 27-17 loss to Washington on Sunday furthers the question: Is he capable of finding the balance that will provide the Eagles’ offense with the adaptability and consistency or will his tenure be an endless roller coaster? The success of the Eagles’ 2020 season appears glued to that answer.

Will Carson Wentz ever learn to throw the ball away? - NBCSP
It’s been an issue since Wentz got here in 2016, and 57 games later it’s still an issue. Wentz is a gifted quarterback who’s won a lot of games in an Eagles uniform and set a bunch of records and made some unforgettable plays. He’s also in his fifth season in the NFL and still holds onto the ball too long. And it’s fair to wonder if he’ll always hold onto the ball too long. Can a 27-year-old quarterback who’s dropped back to pass over 2,200 times in his career ever learn to throw the ball away when that makes the most sense?

Grading all 32 first-round picks after Week 1 of the 2020 NFL season - PFF
Pick No. 21: WR Jalen Reagor, Philadelphia Eagles. 2020 overall grade: 54.3. One deep shot showed how much of a weapon Jalen Reagor can be, but with Carson Wentz struggling as badly as he did, there was little more opportunity for Reagor to impress as a receiver. He also saw opportunities as a punt returner, and while he did make a man miss on one return, he also muffed a punt — only to be bailed out by a teammate recovering the football and sparing his blushes. While the stat sheet might not punish him harshly for that, his PFF grade suffered badly for a play that could have easily resulted in a turnover.

Don’t look now, but a youth movement is happening - PE.com
This isn’t a wholesale change for the roster. That just doesn’t happen in the NFL. And injuries to players like left tackle Andre Dillard (second season) knocked the transition program back just a bit, but the intention remains the same: The Eagles know they are in a season in which the roster is evolving with youth. It doesn’t mean the ultimate goal of winning the Super Bowl is compromised – there are no steps back in that department – but it means the Eagles have a lot of moving pieces that need to come together for this season to head in the direction the Eagles want.

2020 Fantasy Football Rankings: Running backs for Week 2 - Fake Teams
9) The hopeful return of Lane Johnson against the weak Rams front-seven (outside of Aaron Donald) sets up nicely for Sanders.

Eagles special teams coordinator Dave Fipp: That miss on the 53-yard field goal wasn’t really Jake Elliott’s fault - Inquirer
Fipp said that in relaying that information to Doug Pederson, “I think I jammed him up, to be honest with you.” Fipp said Pederson then told him the ball was being spotted on the 35. “So then, I’m like, ‘Oh, yeah, yeah, yeah — go! go! go!’ So then [the field-goal team] got out there late. ... If you look real close, it probably wasn’t our best snap and hold. And that all has an effect on the thing.”

Bears LB Rashad Smith and OL Jamon Brown poached from practice squad - Windy City Gridiron
Brown’s tenure with the Bears comes to an end after just nine days, having been signed to the team’s practice squad after he was released by the Falcons on August 24. Chicago protected him from being signed last week as a part of the NFL’s new four-player protection rule, but the Eagles came in and swooped him before this week’s deadline. He has played in 60 games in his six-year NFL career, starting in 47 of them. He most recently started in nine games for Atlanta in 2019. He moves on to his fifth team in less than three years.

The Cowboys didn’t challenge Los Angeles Rams quarterback Jared Goff at all in their Week 1 loss - Blogging The Boys
There was something particularly disgusting about the way that the Dallas Cowboys lost their season opener. We were all led to believe that we would be seeing something different from the Cowboys in 2020, a different disposition that exhibited more forward-level thinking on both offense and defense. This did not seem to be the case against the Rams. Dallas did little to challenge the NFC Champions from two seasons ago and instead played directly into the hand that Los Angeles wanted in their brand new stadium’s debut.

The sad life of NFL mascots during a pandemic - SB Nation
It’s a classic, cliched existential philosophical query. It questions the nature of identity and whether anything can exist if nothing is there to observe it. If a mascot’s job is to bring mirth and entertain, does that mascot still exist if nobody is there to enjoy it? This is the life of a mascot in 2020. More specifically, an NFL mascot. No children to validate them. No drunken fans to high five. T-shirt cannons silenced by circumstance, trivia questions left unanswered, and gas station gift cards left unclaimed, without a fan in attendance to sit in the winning seat. There were times this weekend when you caught a fleeting glimpse of a mascot. Running through the stands, in full dominion of its concrete jungle, but with no subjects to lord. Lost, wandering souls, waving flags or dancing, with nobody to enjoy it. Occasionally a camera would face them, if only for a moment, making them feel alive until it turned back to the action and they vanished from consciousness once more.

The Linc - The Eagles have some bad juju going on