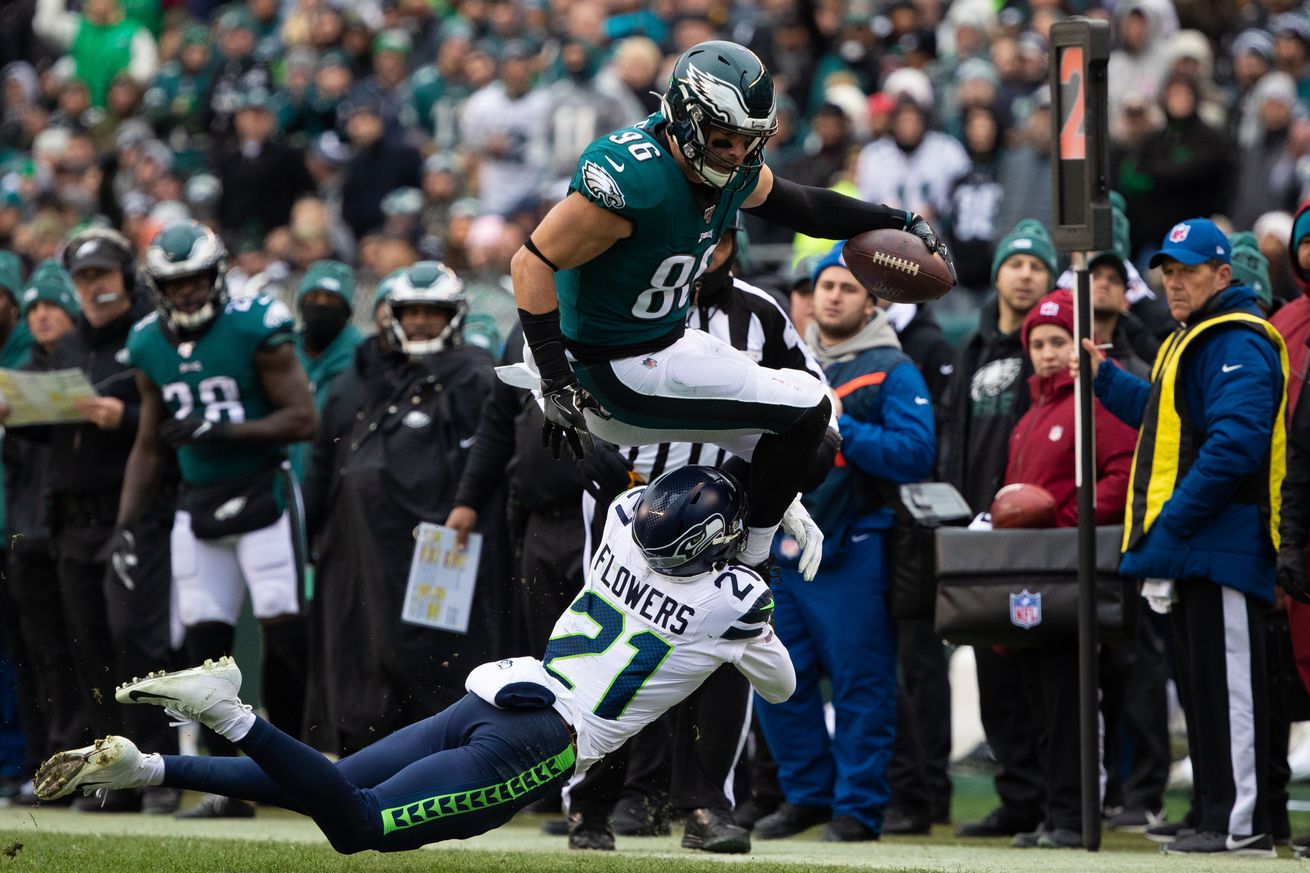 The Philadelphia Eagles issued their third and final official injury report on Friday in advance of their wild card game against the Seattle Seahawks.

First, let’s note that Miles Sanders was a full participant on Friday after sitting out on Wednesday and Thursday. The rookie said he’s going to play on Sunday. He’s not listed with a status on the final report, which is good news. The question is if his ankle injury will flare up during the game and prevent him from either playing or being effective.

Miles: "I feel good where I'm at, cutting and everything. Got some extra work with Carson running routes. All I can say is I feel good."

The Eagles’ three running backs behind Sanders: Boston Scott, Jordan Howard, and the recently signed Elijah Holyfield. Scott figures to be the second back behind Sanders while Howard could see a little more playing time than the one snap he took in Week 17. The Eagles should absolutely be looking to run the ball against this Seattle defense.

Doug Pederson told reporters that Ertz still hasn’t been cleared for contact. The Eagles are waiting on test results they’ll receive on Saturday that’ll determine if Ertz — who reportedly suffered a lacerated kidney — can play or not. If Ertz is cleared, one would think he won’t playing his normal workload. If Ertz isn’t cleared, the Eagles will be down to Dallas Goedert, Joshua Perkins, and Richard Rodgers at tight end. Goedert and Ertz is certainly preferable to Goedert and Perkins.

It seems like the Eagles aren’t going to have Johnson — who didn’t practice Friday — for Sunday’s game. If that’s the case, Halapoulivaati Vaitai will start his fourth consecutive game at right tackle. Matt Pryor, meanwhile, is set to make his first NFL start at right guard since Brandon Brooks is out for the year. The Seahawks will be looking to attack that right side of Philly’s offensive line.

Zach really wants to play. He is healing well. You see him wearing a flak jacket at practice

Im told Lane is doing everything he can, but he is iffy, still having issues with high ankle sprain pic.twitter.com/doXS3ouuZX

It will be 4 weeks Sunday.

I’m told Lane is still having issues, you need to be able to plant that foot, and side to side movement. Lane has done everything he can https://t.co/qhnWSy8J0P

Agholor hasn’t played since Week 13 and he might never play for the Eagles again. The team will carry five active receivers into Sunday’s game: Greg Ward, JJ Arcega-Whiteside, Robert Davis, Deontay Burnett, and the recently re-signed Shelton Gibson. That’s a group of four practice squad call ups and one struggling 2019 second-round draft pick. Ward figures to be the No. 1 wide receiver while Davis, JJAW, and Burnett (in some order) get the most playing time behind him. Gibson will be more of a special teams contributor, though it’d be fun to see him make a play down the field.

Fletcher Cox, Derek Barnett, Jalen Mills, Avonte Madox, and Sidney Jones are all set to play despite being listed on the injury report earlier this week. The guess here is that Mills and Maddox start at outside cornerback with Cre’Von LeBlanc playing the nickel role.

DeSean Jackson is eligible to be activated from injured reserve should the Eagles advance to the divisional round. He’s expected to be healthy enough to return. All the more reason for the Eagles to beat Seattle.

Here’s an update on Brooks, who was placed on IR earlier this week:

Eagles guard Brandon Brooks will have surgery next week for a broken bone in his right shoulder socket, a source close to the situation said. Dr. James Andrews will perform the surgery. Recovery should be easier than last year's Achilles. Brooks expects to be OK for training camp

The big news is that Jadeveon Clowney is not listed on the Seahawks’ injury report despite the fact he missed the previous two practices. Clowney played 66% of the Seahawks’ snaps in Week 17 after missing two games prior. He’s not 100% but the Eagles will be focused on stopping him from wrecking the game. The Eagles didn’t have to face Clowney in Week 12 but he did have success against their offensive line as a member of the Houston Texans in 2018.

Starting safety Quandre Diggs is also set to return to the lineup, as expected. That’s an important reinforcement for Seattle.

Seattle’s offensive line isn’t very good to begin with so Brown being out only makes it even worse. He’ll be replaced by George Fant, who ranks 72nd out of 88 tackles graded by Pro Football Focus this season.

Turner was the recipient of Russell Wilson’s flea flicker touchdown against the Eagles back in Week 12.

Kendricks led the Seahawks in tackles with 13 when he last came to Philly. Seattle will now rely on a backup in their base defense.

With Turner out and Brown questionable, the Seahawks’ depth at receiver behind starters DK Metcalf and Tyler Lockett is thin.

Iupati missed practice on Wednesday and Thursday this week. The same was true last week and he still played against the San Francisco 49ers. Even if he plays, the combination of Fant, Iupati, and backup center Joey Hunt looks awfully vulnerable. The Eagles’ defensive line must exploit the left side of the Seahawks’ offensive line. Time for Derek Barnett to really step up.