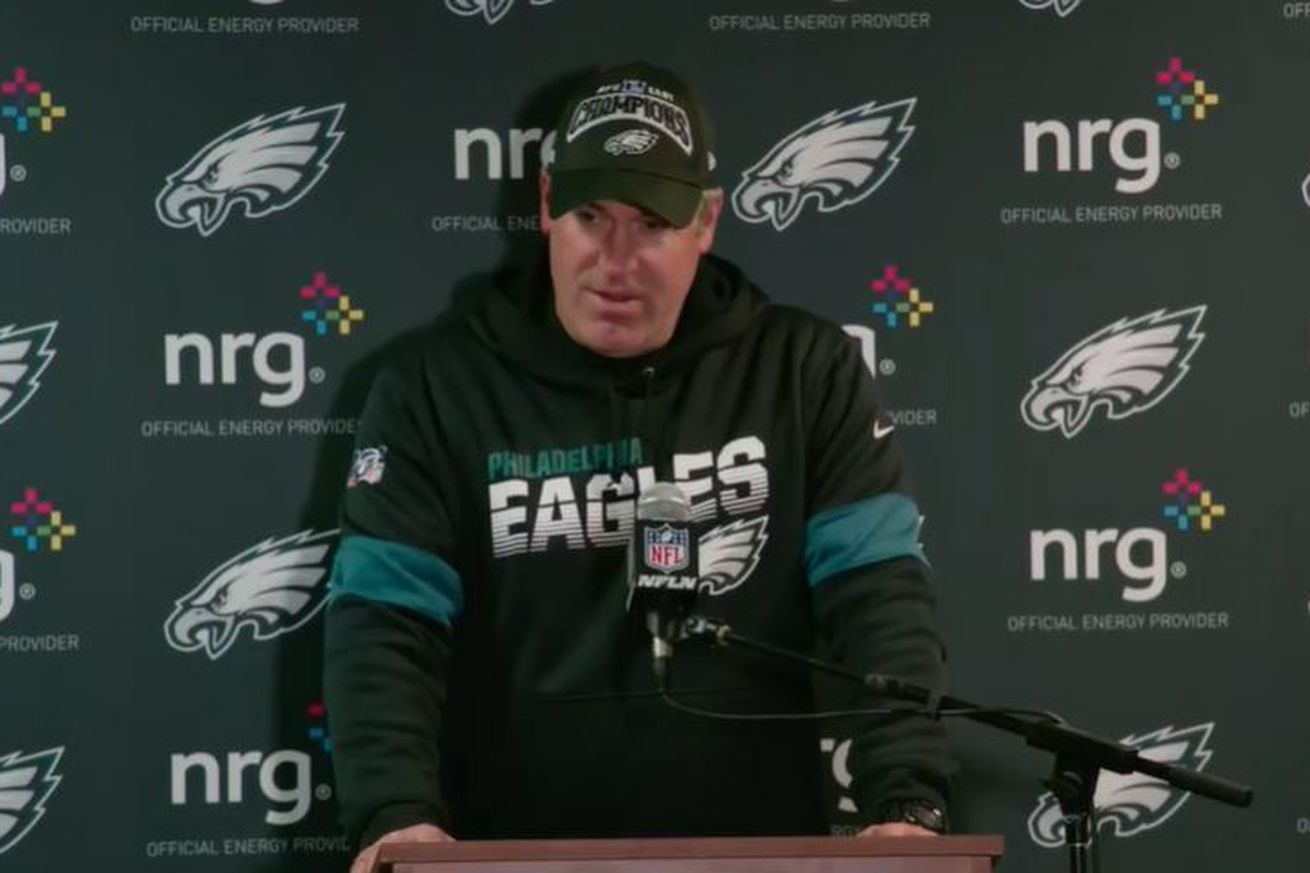 Plus, the Eagles’ head Coach looks forward to starting the postseason 0-0.

THE EAGLES ARE THE NFC EAST CHAMPIONS!

With a big win over the Giants in Week 17, Philly will now continue into the postseason for the third year in a row. Head coach Doug Pederson spoke to the media afterward about some of the injuries sustained during the contest — Miles Sanders, Brandon Brooks, and others — as well as how this team battled through the end of the season to get here.

Here’s what the head coach had to say:

Pederson said there was a lot of dancing in the locker room following the win, and a lot of energy and excitement.

“What I love about this football team is how we have stuck together the entire season, through all the ups and downs, through all the injuries, we’ve battled, we put ourselves in this position to win the NFC East, we’ve done that. But again, what I’ve seen from our players is they’re already talking about next week, and coming to work this week, and preparing for next week. Just tells me the guys are in the right frame of mind.”

He said that it does mean a lot that they were able to get to this point despite everything they’ve gone through this year, but at the same time, there’s still (hopefully) a lot of football left to play.

“I’m just so happy for the guys, for the coaches.”

On the season as a whole

The head coach was asked what he’s most proud of from this season.

“Just staying consistent with the players, and getting them to believe in themselves, honestly. Through all the different adversities and things that we’ve faced, the amount of injuries that have piled up, and the next guy, and promoting all the practice squad players. And just sort of, for me, just kind of keeping everybody on the same page. I think that’s just most proud that I feel with these guys.”

Pederson talked about the players they were already without heading into the game, and then losing Miles Sanders and Brandon Brooks.

“In the back of my mind, it did cross my mind, like ‘Man, when we catch a break with some of these injuries?’”

He said that they don’t have any preliminary updates on either Sanders or Brooks until they get them checked out.

Both Jordan Howard and JJ Arcega-Whiteside were active but didn’t play, and Pederson said that they are trying to be protective of those guys and their injuries.

It was pointed out that at one point during the game, tight end Dallas Goedert was the only skill player on the field that was also on the active roster in Week 1. Pederson discussed how QB Carson Wentz has been able to adapt to find success, but credited his coaching staff for their success.

“I’ll tell you this, Carson’s a part of it, but I commend my coaching staff on offense. I commend Mike Groh for putting plans together to help these players play and be successful. Carson Walsh for putting them in the right positions to be successful. For Justin Peelle to coach up the tight ends in the run game and the pass game. Duce [Staley] to get Boston Scott caught up to speed. Coach Stoutland to get a Matt Pryor ready to go, a Nate Herbig ready to go. That’s where it starts, so that’s what I’m the most proud of, is my staff.

Carson, Carson’s apart of it, right? He is really, I think what we’ve seen here in the last month, is how he’s really embraced his role. How he’s sort of grown up with our offense, with playing this game, just helping us win the East.”

He said that Wentz has also grown up as a leader, and how he’s put the team on his back the past couple weeks is a sign of maturity. Pederson noted that he has so much confidence in the QB that he can call just about any play, and he’s either going to make it work or get them into a better play.

The head coach also noted that the young guys on the roster look up to Wentz like he’s a 12-year veteran, and they definitely look to him for that guidance and help on the field. They see it in practice and in games, and has been a factor in their success down the stretch.

Pederson noted that it feels similar to the 2017 run, with them being a low-seed and seemingly not really having a chance. But, everyone’s record is 0-0 heading into the playoffs, and they’ll get to play at home, in front of Eagles fans to get things started.

3 Common Orthodontic Solutions You Can Consider to Fix Crooked Teeth