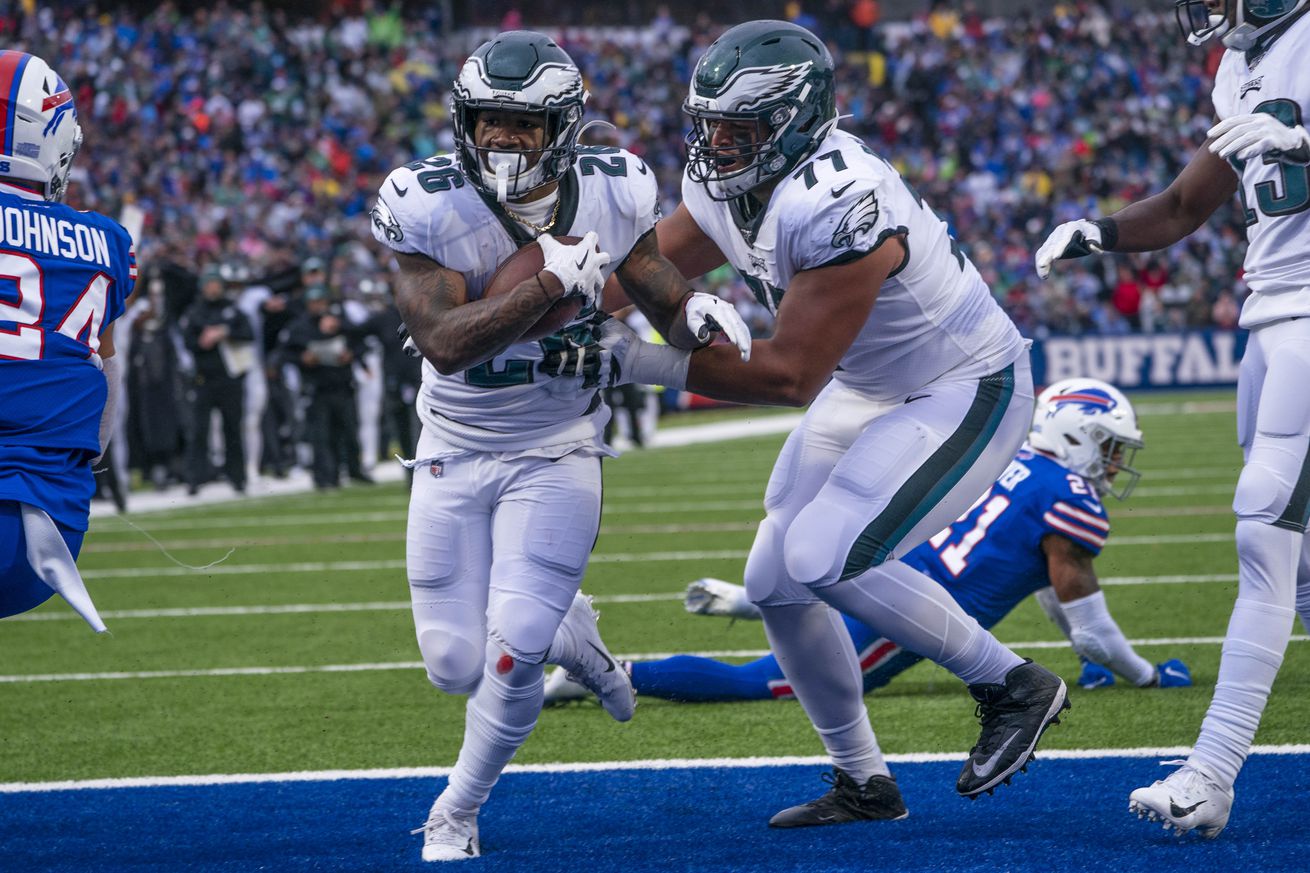 Clutch Defensive Stands—and, As Always, Lamar Jackson—Rule the Day in Week 10 - MMQB
One reason for the Eagles to harbor optimism that they’ll play to their potential down the stretch? They love where their first two draft picks are, and, logically, rookies should ascend as they gather experience. First-round left tackle Andre Dillard’s now got four games of experience, and he has progressively gotten better while facing, in order, Everson Griffen, Robert Quinn, Jerry Hughes and a combination of Leonard Floyd and Khalil Mack. And second-round running back Miles Sanders has eight plays of 20-plus yards in nine games, plus a 67-yard kick return. Dillard’s emergence gives the Eagles’ a nice problem to have, in managing Jason Peters’ return to the lineup, and Sanders opens up a lot of possibilities offensively. Good players now, and nice building blocks going forward.

Eagles are home underdogs against the Patriots in Week 11 - BGN
The Philadelphia Eagles and New England Patriots both enjoyed bye weeks in Week 10 and now they’ll be back in action at Lincoln Financial Field in Week 11. It comes as no surprise that the 5-4 Eagles are three-point underdogs (per DraftKings Sportsbook) in this matchup. On paper, at least, they look to be outclassed by the 8-1 Patriots. But a closer inspection of the Patriots’ record raises questions about how just good they are. The Patriots’ strength of schedule (.366) ranks second easiest thus far; only the Buffalo Bills have had it easier.

NFC Hierarchy/Obituary: Week 11 edition, Cardinals are dead - PhillyVoice
Not only do the Eagles have the advantage of the more favorable schedule than the Cowboys (.424 vs. .516), but they also only have one flight left on their schedule, when they make an easy trip to Miami Week 13. It’s all right in front of the Eagles to steal this division after a disappointing first half of the season. The Birds should be getting some players back from injury, and some others already playing through pain should be healing up. There’s no excuse not to get it done.

The Stretch Run - Iggles Blitz
Let’s say the Eagles are able to go 5-2 down the stretch and they do win the NFC East. Can they really make some noise in the postseason? Absolutely. We saw last year that the regular season doesn’t have to define you. The 9-7 Eagles went on the road and upset the 12-4 Bears. The Eagles then went down to play the 13-3 Saints. The Eagles led at halftime, but ended up losing 20-14. The team was in position to steal that game at the end, but AJ had a pass go through his hands and right to a DB. Go back to 2008. The Eagles went 9-6-1 and were a couple of plays from going to the Super Bowl. Get in and you have a chance. You know Carson Wentz is desperate to play in the postseason. If the Eagles can get there, he will do everything in his power to win the game. The Eagles went 4-1 in the postseason over the past two years. This team isn’t afraid of January.

The Eagles’ biggest problem right now can be explained through Golden Tate’s success with the Giants - NJ.com
The Eagles have one of the least productive wide receiver groups in the NFL, and all of a sudden Tate looks like The One That Got Away. With 11:51 left in the third quarter, Tate took a screen pass from Daniel Jones and ran 61 yards for a touchdown. That was more yardage on one play than Tate had in 9 of 10 games unproductive games (counting the playoffs) with the Eagles after being acquired at the trade deadline last year. He has 33 catches for 417 yards for the Giants, which would lead all Eagles receivers ... even though he’s only played six games. That whole progression, from Tate being rendered useless in Philadelphia (even offensive coordinator Mike Groh admitted last season that it had been “challenging to integrate” him) to productive in East Rutherford is an indictment on the Eagles coaching staff, and underscores the biggest problem the organization has right now. That is -- the development of wide receivers on the roster, and integration of new receivers.

Is assistant coach Carson Walch to blame for Eagles’ WR woes? - Inquirer
Walch’s comments on Mack Hollins were the most incendiary. He could have noted that the third-year receiver was far down the list of receiving options, as Pederson has, or that he was coming off two sports hernia surgeries. But Walch instead said that Hollins, who has zero catches over the last five games despite running 89 routes, was “one of our top graders every week because he aligns right, he assigns right, and he plays with great effort.” With Jordan Matthews taking Jackson’s roster spot and Arcega-Whiteside cross-trained now at multiple positions, Hollins could return to playing mostly on special teams. Actions would then speak louder than Walch’s words.

Beat back and forth: Analyzing Brandon Brooks’ extension and takeaways from the Eagles assistant coaches - The Athletic
I understand Walch is in the business of protecting his players, but those quotes are ridiculous. You take the guys who align right, assign right and play with great effort and I’ll take the, uh, good players, and we’ll see who wins. But I do think you’re right: The offense will look better in the near term with Matthews in the slot and Agholor outside, which is not saying much.

Bill Belichick shares incredibly detailed childhood memories of Philadelphia - NBCSP
Turns out old Bill has a soft spot for our fine city dating back to when he used to attend the Army-Navy game as a youngster. He dropped the names of some Philly bona fides, from former Eagles players to former department stores. ”I always got a real nice and warm reception from the fans,” Belichick began. “I’m sure that will continue.” ”There are a lot of memories for me from Philadelphia, going back to the Army-Navy game at JFK Stadium and the Vet. From the Randall Cunningham 93-yard punt to winning there with Cleveland in 1994, the great rivalries with the Eagles when I was with the Giants. It was tough against Dick Vermeil, and then we did okay for a while, then it was tough in the later 80’s when they had some of those great defenses. They had [Keith] Jackson, [Keith] Byers, a lot of those guys.”

Bracing for impact (by Carson Wentz) - PE.com
It’s probably one of the hardest things, honestly, to witness the pain that others are enduring, especially with children. It hits you, but it also reminds you that the bigger reason, and bigger purpose, to why we play this game is so much more than wins and losses. It’s to make a difference and hopefully leave this world a better place. It’s to bring joy to dark places in people’s lives. I want to be there to support them. I want to encourage them. I want to be there for them. That’s why I wear the bracelets. I wear them for Lukas, Landon, and Lily, to let them know that they are out on that field with me. It gives me a greater appreciation for what I do, and really, why I do it.

2019 Fantasy Football Rankings: Quarterbacks for Week 11 - Fake Teams
15) Carson Wentz — The bye week allowed for extended game planning but the lack of a vertical threat has capped Wentz in the QB2 range. The Patriots defense won’t let him surpass his established ceiling.

Meet the Patriots’ Week 11 opponent, the Philadelphia Eagles - Pats Pulpit
What to watch this week: The biggest story leading into this game is certainly the “Super Bowl rematch”-factor. As noted above, the two teams met on the game’s biggest stage two seasons ago with the Eagles winning 41-33. Both teams have changed quite a bit since then, so it will be interesting to see whether New England’s defense will find more success against Carson Wentz as it had against Nick Foles in February 2018. All signs point to yes, but the extent of this success could very well determine the winner on Sunday.

Seahawks-Eagles flexed out of Sunday Night Football in Week 12 - Field Gulls
So much for four straight prime-time games: On Tuesday, the NFL announced changes to the schedule, including moving the Seahawks’ trip to Philadelphia from Sunday Night Football to a 10 AM PST kickoff. Seattle’s trip to take on the Eagles was replaced by the Packers’ trip to San Francisco to take on the 8-1 49ers.While obviously Sunday Night Football would have been preferred, the new slot allows the Seahawks to try and continue two streaks. The first is Seattle’s 5-0 record on the road in 2019. The second is one that would have seemed inconceivable just a few seasons ago: “Seahawks are now on a six game winning streak in 10 AM PST kickoffs, having last lost in this time slot in New Orleans on 10/30/2016. The terror that accompanied these starts on the schedule seem like a lifetime ago.”

Jadeveon Clowney Has the Potential to Restore the Seahawks’ Defensive Identity - The Ringer
Seattle’s Legion of Boom may be gone, but against the 49ers, the Pro Bowl edge rusher who the franchise traded for this offseason looked every bit like the defensive force the team has been missing.

Josh Gordon had “huge, huge catches” in Seahawks debut - PFT
Gordon caught a pass from Russell Wilson and gained 13 yards on a third-and-six to continue a drive that ended with a Jason Myers field goal. Wilson looked Gordon’s way on another third down in overtime and Gordon picked up 14 yards on his second and final catch of the night. “Josh Gordon has been a great addition to our team,” Wilson said in his postgame press conference. “We have a lot of great receivers and a lot of guys who can catch the football and make plays. He made some huge, huge catches today on third downs. He had the one slant to the right and I think another on the left. Just some of the plays he was making with confidence on big third downs to continue drives. He was great. He had a great week. It’s great to have him on our football team.”

Bucs release Vernon Hargreaves III - Bucs Nation
Hargreaves was benched during Sunday’s win over what seemed to be a lack of effort on a 55-yard catch and run by Cardinals receiver Andy Isabella. Bruce Arians and Todd Bowles both thought they had something in Hargreaves, evidenced by the team’s decision to pick up his fifth-year rookie option in April of 2019. But ineffective play and a lack of attention to detail have derailed his career under a new coaching staff. [BLG Note: Don’t see the Eagles going after VH3. They already have Cre’Von LeBlanc returning from injury in the near future.]

Bengals release LB Preston Brown, per report - Cincy Jungle
Benching Andy Dalton now might be the second-most shocking move the Bengals have made this season. The Bengals are releasing linebacker Preston Brown, per Tyler Dragon of the Cincinnati Enquirer. [BLG Note: Brown started 14 games for Jim Schwartz as a rookie back in 2014.]