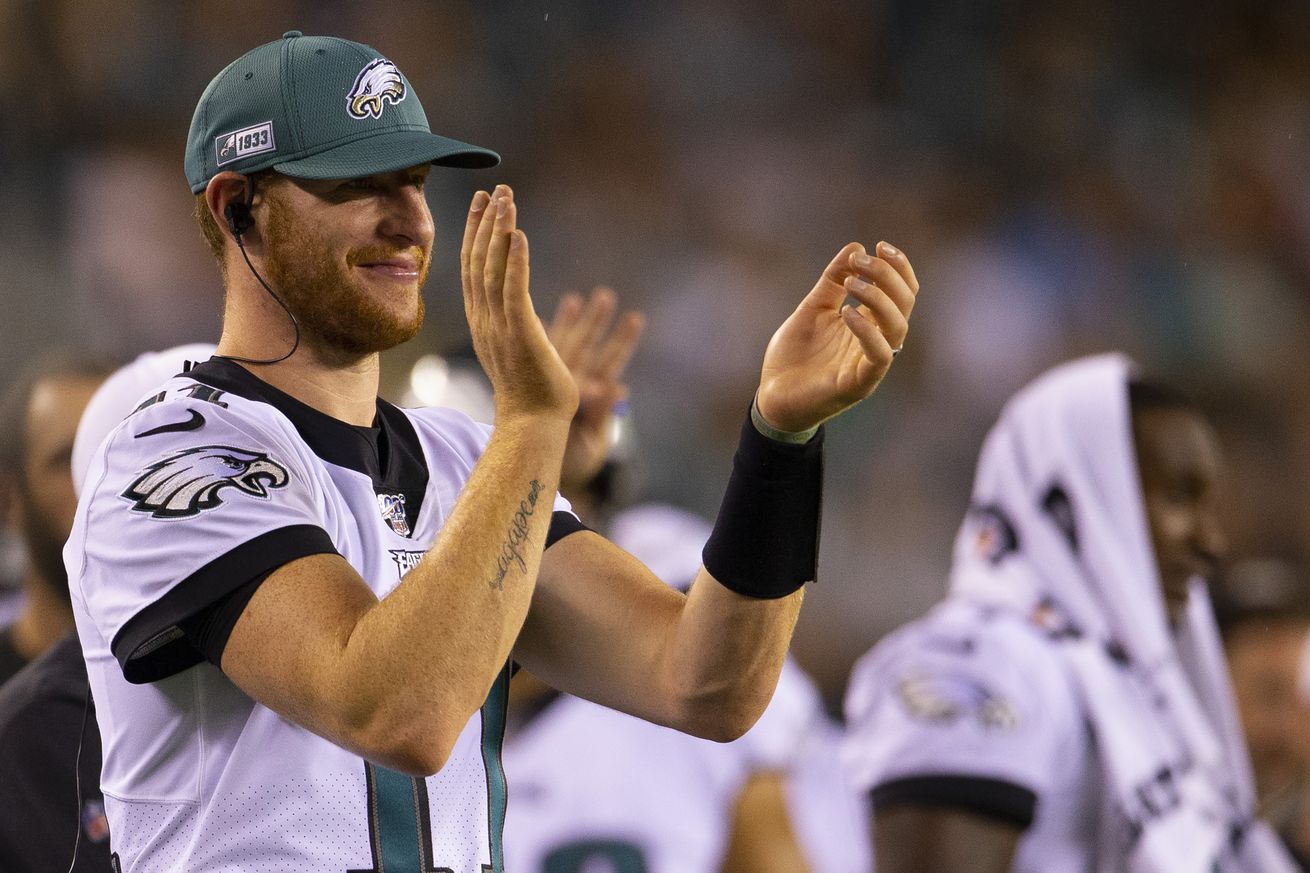 Let’s see what Vegas thinks some prominent Eagles players will do this year.

I’m not much of a betting man, but boy do I love me some over/unders.

Vegas has a way of affixing a number to things that makes you stop and think. Their numbers are designed to get half the betting public on one side of the number and the other half on the other side.

Of course, most of you reading already know this, but it’s worth mentioning as we take a gander at some of the most intriguing over/under numbers out there for some of your favorite Eagles players with just a little over a week before the regular season kicks off.

Some of these over/unders are from BetOnline.com and some are mine. So sit back, take your pick, and rip my numbers to shreds in the comments section.

(Also check out this BGN Radio episode where I discussed even more Eagles over/unders and interviewed special guest Kevin Harlan!)

No, I’m not going to pick Carson Wentz to miss at least three games this year.

While no convincing argument has been made that Wentz’ back injury last year was related to his knee, it’s easy to consider the 2018 injuries as an extension of the torn ACL and MCL he suffered in Week 13 the year before. It generally take a full year for a player to recover from a devastating injury like that, and I’m reluctant to predict that any QB, on any team, is going to miss a certain amount of games. So I’m taking the over on Carson Wentz starts in 2019. He’ll be fine.

There’s no way Howard is getting that kind of volume, so if he rushes the ball 170 times this season, which is what Blount did in ‘17, and averages what he did last year, 3.7 yards per attempt, that comes out to 629 yards rushing, far underneath 750. So I’m taking the under.

Trying to figure out how big a role Sanders is going to have in this offense is a mystery. He’s shown great flashes in the preseason and, by all accounts, has looked like the most dynamic back in camp. But will he get enough touches to clear 650? Let’s say he gets 150 rushing attempts in 2019. He’d need to average 4.3 yards per carry to get to 650 yards.

Is that doable? Certainly, but I can’t say it’s a sure thing, especially since we don’t know how much Corey Clement is going to play and what role Darren Sproles will have in the offense. Sproles is always a little more involved than you’d think he would be. That’s why I’m taking the under on Sanders too, although I think it’ll be close.

Look, I love Brandon Graham and it’s great that the Super Bowl 52 hero is back. But Graham has never been a big sack guy. Only one time in his career has he gotten more than 6.5 sacks, and that was in ‘17 when he had 9.5. Maybe having better players on the interior will allow him to get to the QB faster this year, but history tells us it’s more likely than not that Graham will finish with under 6.5 sacks.

Again, if history is our guide, the answers here are pretty easy.

Jeffery hasn’t reached 900 yards in a season since 2014!!! And in just 10 starts last year, Jackson had 774. Jeffery’s connection with Wentz hasn’t been as solid as Nick Foles’ was, however, it appeared this summer that the Wentz-Jeffery connection was getting better. Jeffery has the ability to haul in some downfield passes, as we saw in ‘17 postseason, but 900 yards is a high bar when he’s competing with Jackson, JJ Arcega-Whiteside and Nelson Agholor for targets. I’m taking the under on Jeffery, but the over on DeSean, seeing as how Jackson will likely pile up some big yardage totals on relatively few targets. If he stays healthy.

The Eagles went heavy with 12 personnel over the final six games of last year, and in those six games, Goedert was on the field for at least half the snaps. But with the additions of Jackson and Arcega-Whiteside, and incumbents Jeffery and Agholor still around, can the Eagles play a full season with Goedert getting on the field half the time? I’m skeptical, so I’ll take the under on this one.

Last year, Ertz went crazy when he hauled in 116 balls for 1,163 yards and 8 TDs. It was the greatest season by an Eagles tight end in team history, and one of the greatest seasons any tight end has ever had. But in the three seasons prior to last year, Ertz caught 74, 78 and 75 passes. In his second season, Goedert should see more targets, but again, there are only so many balls to go around, and let’s not forget that a healthy Clement and Sproles could suck up some of those check-down throws that might otherwise go Ertz’ way. He’s going to see a drop in his production, so take the under, although he’s still a stud.

The last time the Eagles had a rookie wideout as their No. 4 receiver was in 2017 when Mack Hollins caught 16 balls for 226 yards and just one touchdown. However, Hollins was a 4th round pick that off-season, J.J. is a second rounder and appears to be more of an impact player already. He’s also shown an adeptness at making himself a goal line threat this summer. Can Arcega-Whiteside get enough playing time and find a way to snag four touchdowns? Call me crazy, but I say yes. I’m taking the over.

The Eagles feel like an 11-win team, but in today’s NFL, it’s hard to win 11 games. So many bad things can happen. Vegas has the line set at 9.5, which made sense when Wentz’ backup was the unproven Nate Sudfeld. But with Josh McCown in the fold, you could envision him leading the Eagles to a few wins should they lose their franchise QB for a game here and there.

Like I mentioned above, I don’t think Carson is going to miss much, if any, time this season. But with McCown, I think nine wins is the absolute floor for this team. The Birds should win at least 10 and are in a great spot, with Washington and New York once again very weak, to finish 11-5 this season.

So, yeah, I’m bullish on the over here as well.