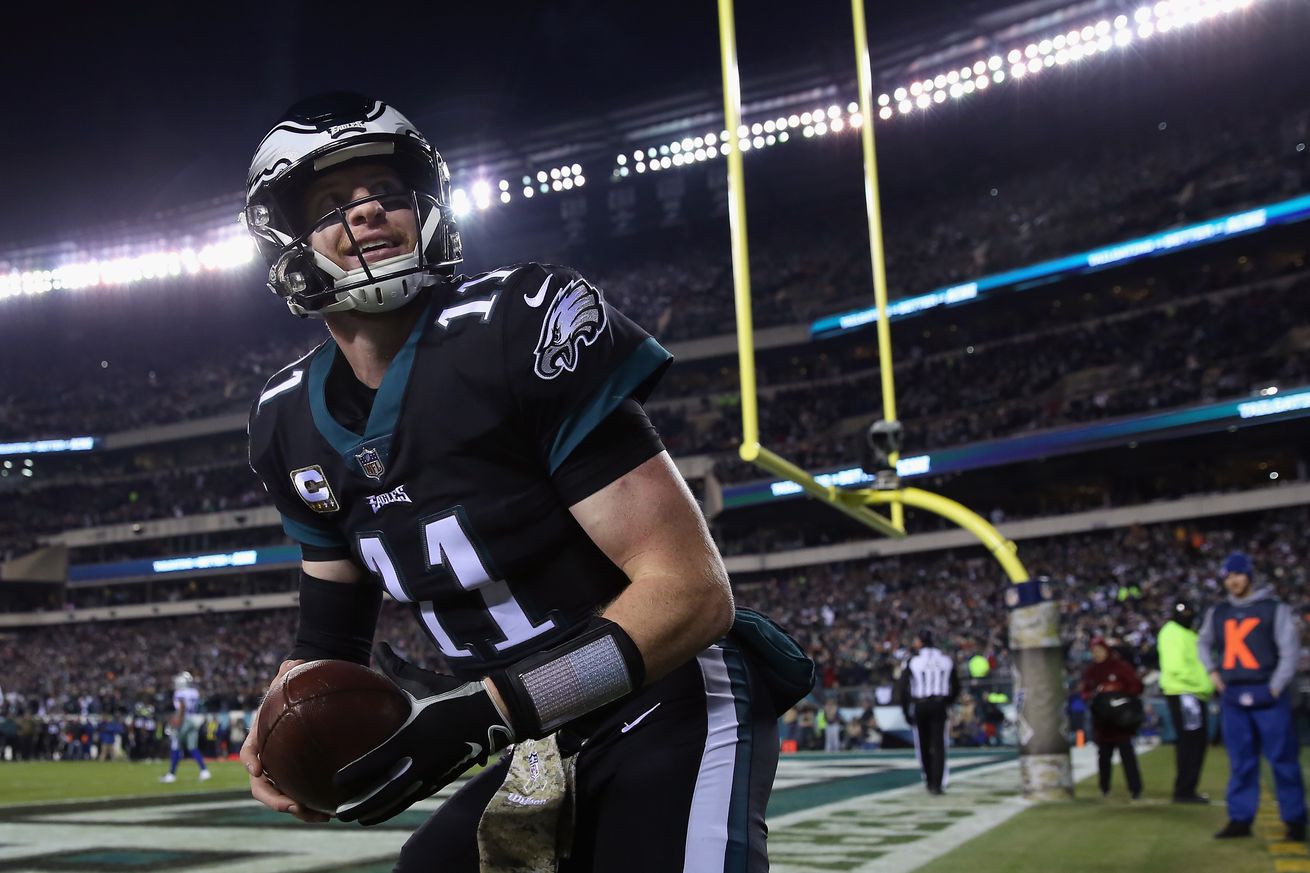 Shout it from the mountaintops: FOOTBALL IS BACK! We’re just two days away from the 2019 NFL regular season kickoff game on Thursday night.

Now that football has returned, so has everyone’s favorite meaningful exercise: NFL Power Rankings. It’s that time of year to figure out where all 32 teams rank for the first time. Let’s get right to it.

Kiran SSC Math’s 8900+ Chapterwise PD…
Schema Markup, Types & Why is It Impo…
A Comparison of the Environmental Imp…
What Marathon Running and Successful …
Calm by Wellness CBD Review

1 - New England Patriots - The defending Super Bowl champions are still on top until they give us reason to believe otherwise. The David Andrews injury sure doesn’t seem great for the Pats, though.

2 - Kansas City Chiefs - Andy Reid has Patrick Mahomes, Tyreek Hill, Travis Kelce, Sammy Watkins, Mecole Hardman, LeSean McCoy, Damien Williams, and even more options at his disposal. Not bad! Mahomes was so incredible in 2018 that he can regress in 2019 and still have a very good season.

3 - New Orleans Saints - The Saints have a strong case as the best team in the NFC. Their offense has been consistently great under Sean Payton and Drew Brees. There’s ample reason to believe they’ll putting up plenty of points in 2019, assuming they can actually focus on winning and not crying about how they got screwed in last year’s NFC Championship Game. You got the ball first at home in overtime with a Hall of Fame Quarterback, losers.

4 - Philadelphia Eagles - Why can’t the Eagles win Super Bowl LIV? The path is there. A now healthy Carson Wentz is poised to regain MVP form thanks in part to being surrounded by a strong supporting cast: DeSean Jackson, Alshon Jeffery, Nelson Agholor, Zach Ertz, Dallas Goedert, Miles Sanders, JJ Arcega-Whiteside, Jordan Howard, Darren Sproles, and Corey Clement ... not to mention one of the best offensive lines in the league. Jim Schwartz should be able to get enough out of the Eagles’ defensive talent to complement one of the league’s top offenses.

5 - Los Angeles Rams - If the Rams were in a stronger division, I don’t think I’d be ranking them this highly. It just feels like Los Angeles is poised to regress. They’ve been the healthiest team in the league over the past two years and that luck is bound to run out at some point. We also saw how Sean McVay’s offense got stifled late last year. Don’t think this team is trending in the right direction but I’m giving them some benefit of the doubt based on the past two years of regular season success.

6 - Los Angeles Chargers - If Philip Rivers ever going to win a Super Bowl? The Bolts have talent. They’re going to be a good regular season team. But can they just make it matter in the playoffs for once?

7 - Seattle Seahawks - The Seahawks maddeningly eliminated themselves from the playoffs earlier this year by taking the ball out of Russell Wilson’s hands. There’s been talk of Seattle embracing analytics more so hopefully for their sake that’s true and they realize running the ball all the time is dumb when it’s limiting Wilson’s impact. The lingering presence of offensive coordinator Brian Schottenheimer doesn’t feel great but Wilson is good enough to overcome deficiencies around him. The Seahawks also just added Jadeveon Clowney to their defense so that’s pretty good too.

8 - Green Bay Packers - You can never really count out the Packers from going on a surge when Aaron Rodgers is their quarterback. There are still questions about Green Bay’s overall talent and new head coach Matt LaFleur, though.

9 - Atlanta Falcons - The Falcons got bit hard by the injury bug last year. They should be healthier in 2019. Atlanta has a franchise quarterback in place and a lot of talent on their roster. They’ll at least be competing for an NFC Wild Card spot.

10 - Baltimore Ravens - The Ravens finished the 2018 regular season as one of the hottest teams in the league prior to Lamar Jackson’s postseason struggles. Jackson isn’t going to be able to carry Baltimore on his back but the Ravens can find a winning formula with having him serve as a game manager. The Ravens’ defense should be good enough to take the pressure off Jackson. Adding Earl Thomas is a big deal.

11 - Pittsburgh Steelers - The Steelers “lost” Antonio Brown and Le’Veon Bell but they’re not devoid of offensive talent. Ben Roethlisberger always gives Pittsburgh a chance to be in the AFC playoff picture.

12 - Chicago Bears - The Bears could easily be akin to the 2018 Jaguars; Chicago is a PRIME regression candidate. The Bears were great last season due to their top-ranked defense but they lost Vic Fangio and that side of the ball isn’t so sticky on a year-to-year basis. Major questions remain about Mitchell Trubisky. Is he even any good? I have my doubts.

13 - Dallas Cowboys - Dak Prescott’s Average Passer Rating in games with Ezekiel Elliott: 99.9. Dak Prescott’s average passer rating in games without Ezekiel Elliott: 80.8. The Cowboys will be in trouble if Zeke’s holdout causes him to miss regular season game(s). With Zeke, Dallas should be above league average. But are they this sleeping juggernaut some have made them out to be? No. If anything, they’re poised to take a step back in 2019 after overachieving in 2018. Dallas ranked 14th in point differential and 21st in DVOA last year. The Cowboys are closer to being average than they are being elite.

15 - Houston Texans - The Texans are another team very obviously primed to take a step back in 2019. The very talented Deshaun Watson might be able to stave off such regression but it’s a big ask. Houston won a lot of close games last year, which isn’t sustainable over the long-term. A lot of those games came against bad quarterbacks, too. The Texans could benefit from the rest of the AFC South being worse than them but they’re not a real Super Bowl contender.

16 - Carolina Panthers - The 16th spot is appropriately reserved for a team that’s hard to get a good read on. They could really go either way. The Panthers are a natural fit for this spot due to their year-to-year inconsistency. Cam Newton coming off a shoulder injury is also a significant concern.

17 - Cleveland Browns - 2019 is supposed to be the year where the Browns make the leap from laughing stock to legitimate playoff team. Cleveland should be improved given the talent upgrades they’ve made and the presence of emerging star quarterback Baker Mayfield. But questions remain here. The offensive line isn’t in fantastic shape, Freddie Kitchens is unproven as a head coach, and the AFC North figures to be competitive. The Browns still might be one more year away from making the postseason.

18 - Indianapolis Colts - It feels like this could be too high for the Colts with Jacoby Brissett as their starting quarterback now. I do believe in Frank Reich, though, so I’m showing them some leniency.

19 - Tennessee Titans - Mike Vrabel showed some nice things in his first year as a head coach. The quarterback situation here seems dicey, though. I don’t think Marcus Mariota is actually good; he might even get replaced by Ryan Tannehill at some point. This feels like a low-ceiling, high-floor team to me.

20 - Jacksonville Jaguars - Nick Foles figures to be a big upgrade over Blake Bortles. It only helps that he’s reunited with former Eagles quarterbacks coach John DeFilippo. But how much success is Foles really going to have working with one of the league’s worst supporting offensive casts? Foles has often proven his doubters wrong but this is a whole new challenge for him as a full-time starter. His high variance might not work out for well in a bigger sample.

21 - New York Jets - The Jets could be on the rise if Sam Darnold makes a big leap this year. They’re still playing for a Wild Card spot at best, though.

22 - San Francisco 49ers - The 49ers were everyone’s favorite breakout team last year before Jimmy G got hurt. Jimmy G, coming off ACL injury, had some shaky moments this summer. Can we be sure he’s going to be really good for San Fran?

23 - Detroit Lions - Matt Patricia didn’t show much in his first year of being a head coach that inspired a lot of confidence. And is Matthew Stafford ever going to make the team around him better?

24 - Buffalo Bills - Buffalo’s defense should be pretty good. But how much does that matter if Josh Allen isn’t?

25 - Denver Broncos - It legitimately took me a moment to remember who the Broncos were starting at quarterback this season. It’s Joe Flacco. So, yeah, I’m gonna pass on believing in the Broncos.

26 - New York Giants - It’s really only a matter of time until a struggling and washed up Eli Manning gets benched for Daniel Jones.

27 - Washington Redskins - Washington arguably has the worst starting quarterback in the NFL with Case Keenum under center. They should probably be lower on this list but I do like some of the pieces they have elsewhere on their roster. It’s not ALL bad.

28 - Tampa Bay Buccaneers - I buy Bruce Arians as a good head coach but I do not buy Jameis Winston as a good quarterback. It’ll be very impressive if Arians can turn Winston into a success. I’m not holding my breath.

29 - Oakland Raiders - I mean, this team seems to have “disaster” written all over them.

30 - Cincinnati Bengals - The Bengals are such an uninteresting and uninspiring bunch.

31 - Arizona Cardinals - There’s intrigue in Arizona with Kliff Kingsbury and Kyler Murray in the fold. There’s also a lot to prove.