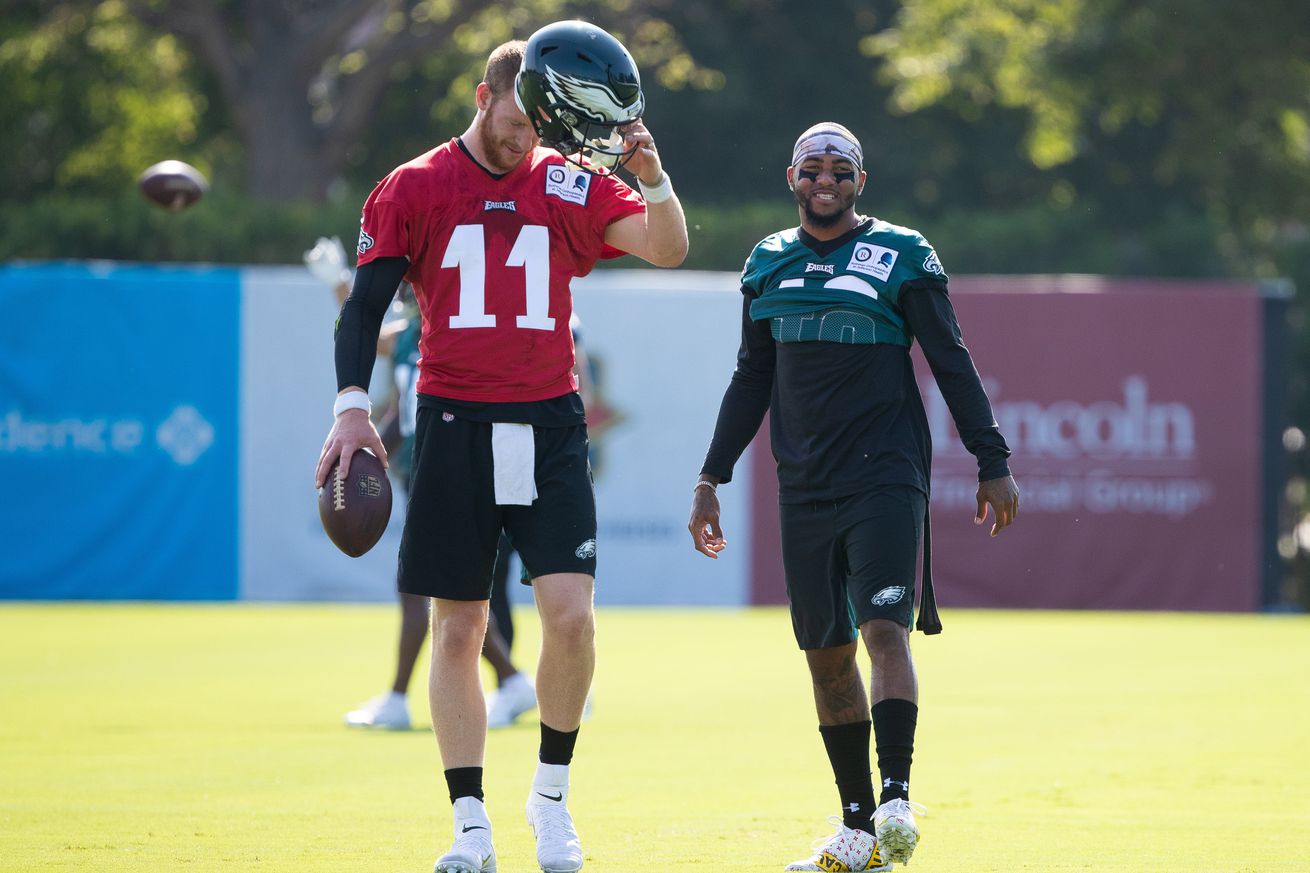 Here’s what we learned today.

Today marked the eleventh 2019 Philadelphia Eagles training camp practice. It was the team’s final practice before their first preseason game on Thursday evening. Read on to see what I observed!

• CARSON WENTZ UPDATE: It feels like there’s at least one — if not multiple — Wentz to DeSean Jackson deep bomb in every practice at this point. Today it was Wentz launching to Jackson for a 60-yard touchdown. Perfect throw.

Earlier in camp, Wentz was overthrowing Jackson. And that did happen again today with Rodney McLeod coming up with an interception. For the most part, though, the timing between Wentz and Jackson is really good.

It’s really hard not to get excited about Jackson’s big play ability in 2019. That’s just something the Eagles sorely lacked last year. The 2018 Eagles made moving the ball look so much harder than it should be in today’s offensive-friendly NFL. They didn’t really have anyone who could easily generate a huge play. It’s a relief to know that won’t be an issue in 2019 with Jackson around.

• Clayton Thorson’s been having a really bad camp but he actually looked good today! The rookie quarterback’s highlight throw was a deep touchdown pass to Greg Ward. 45+ yards in the air, right on the money. Thorson had another completion up the seam to a leaping DeAndre Thompkins. I’d typically expect him to overthrow that one and get picked off. Good to finally see something positive from Thorson.

• Sidney Jones got his hand on a short Wentz pass meant for Alshon Jeffery but the receiver didn’t give up on the play and made the catch anyway. Still, just another example of Sid being around the ball.

• It’s been a relatively quiet camp for Blake Countess but the second team safety did break up a Nate Sudfeld deep throw meant for a leaping JJ Arcega-Whiteside. JJ has a reputation for being good at the catch point so that’s not a routine play for Countess, especially when he’s four inches shorter than the receiver.

• Mack Hollins did a nice job of diving to down a punt at the 1-yard line in special teams drills. He’s still not doing offensive team drills but nice to see him not totally inactive. Hollins’ injury issues have been frustrating but I don’t think the team is ready to give up on him, especially when he’s at least a good special teams guy to have around.

• Second team center Stefen Wisniewski continues to struggle snapping accurately. The ball is on the ground way too often. I don’t know that Wis is a lock to make the Week 1 roster. The team could try to cut him and bring him back after Week 1 so his 2019 salary isn’t guaranteed as a vested veteran. Maybe the team feels good enough about Matt Pryor to have him play at left guard with Isaac Seumalo moving to center in the event of a Jason Kelce injury.

• Josh Hawkins had multiple pass breakups today. I don’t think he makes the 53 and he’s not practice squad eligible anymore. Could be a guy who gets claimed by another team on waivers.

• Undrafted rookie free agent cornerback Jay Liggins had a good run stop and a pass breakup today. He’ll be trying to push for a practice squad spot this summer.

• Undrafted rookie free agent Ryan Bates, who has been lining up as the third team left tackle, had a false start today. Doug Pederson didn’t like that and barked out “No more penalties, men!” Ward later had a false start of his own, though.

• Punter note! (Here you go, Alexis.) Cameron Johnston had some really booming punts today. He also did a good job of pinning some coffin corner punts within the 5-yard line. That’s a key area for him this year after not always being great with directional punting in 2018.

• DeSean and Nelson Agholor have formed a bond as Eagles teammates. They have a celebration they do:

They also hung out after practice for a bit today:

The Eagles will hold a walk-through closed to access on Wednesday prior to their first preseason game against the Tennessee Titans at Lincoln Financial Field on Thursday evening. Kickoff is set for 7:30 PM ET. Stay tuned to BGN for more coverage, as always.