How the heck is the Eagles’ cornerback position going to play out? 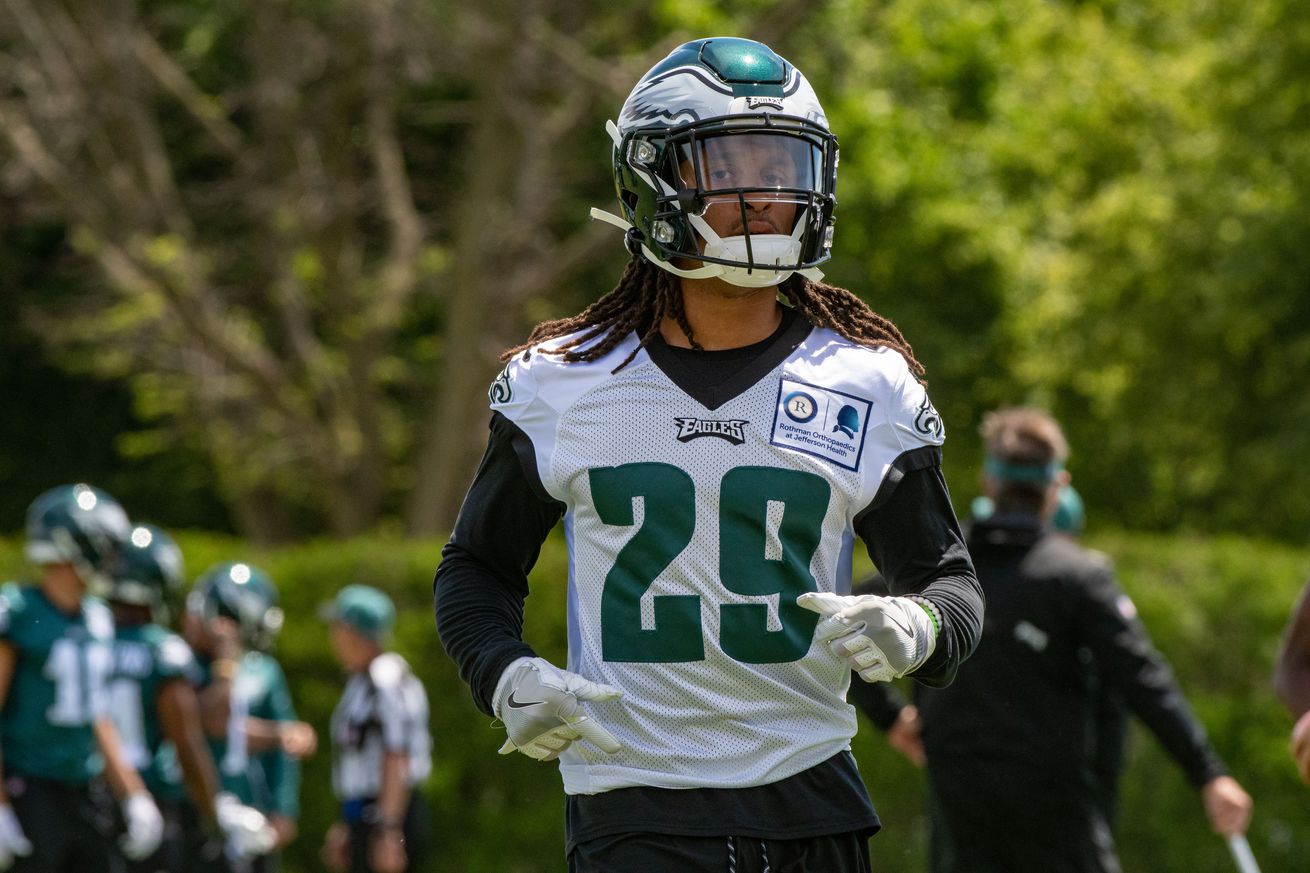 Philadelphia Eagles training camp is almost here. Players report to the NovaCare Complex on Wednesday, July 24. As we count down the days together, Bleeding Green Nation will be previewing every position on the Eagles roster. We continue today by taking a look at the cornerback position. Previously: Quarterback | Running back | Wide receiver | Tight end | Offensive line | Defensive end | Defensive tackle | Linebacker.

Most Eagles fans were fine to see Darby, who suffered a season-ending ACL injury in November 2018, leave the team during the 2019 offseason. The expectation was that his market would price himself beyond what the Eagles could reasonably pay and Philly would be better off trying to collect a 2020 compensatory draft pick.

But that’s not what happened. Darby ended up settling for a one-year, prove-it deal (worth around $6.5 million plus incentives) with the Eagles. The team wanted to keep him around more than most expected.

As such, a healthy Darby figures to be a starting corner for the Eagles in 2019. It’s just a matter of when he’s going to be ready to get back on the field. Darby warmed up with the team and did some position drills during spring practices, so a Week 1 return doesn’t seem off the table.

2019 is a big year for Darby. He’s hoping to test the free agent market again in search of a big deal next offseason. He’ll have to be more consistently good than he was in 2018. He’ll also have to stay healthy after previously missing eight games in 2017 and seven in 2018.

Darby has talent. The pressure is on the 25-year-old needs to put it together this year.

Mills is arguably the least divisive player on the roster. Oh, sorry, I meant to type “most.”

Mills’ biggest stans will point to how he’s really good in the red zone. And they’re not wrong about that.

Jalen Mills dominated in the red zone – forcing incompletions more often on targets inside the 20-yardline than any other cornerback in the regular season pic.twitter.com/BCYaoFSQsZ

On the flip side, Mills’ biggest detractors will point out how he gets torched and gives up too many big plays. They argue he should benched, if not cut entirely.

It’s clear where Eagles defensive coordinator Jim Schwartz stands on Mills. Schwartz believes in the Green Goblin as a starter for this defense. And so, if Mills is healthy, I’d expect him to be starting opposite of Darby just like he was in 2018.

But that’s the thing. When is Mills going to be healthy? He sure didn’t participate in spring drills; he was hardly even present on the sidelines at practice. I can’t shake what Dave Spadaro wrote about Mills earlier this offseason:

This could be a tricky situation. Jalen Mills has a foot injury serious enough that he missed half the season and wasn’t close to returning in the playoffs. Is he going to be OK for 2019? Think about the challenges for a cornerback with a foot injury … he needs all the mobility and change of direction available. There is no word on when Mills will be good to go, so let’s hope he makes good progress in his rehab. He was missed in 2018.

I could be wrong but I don’t think it’s impossible that Mills could start the 2019 regular season on the Physically Unable to Perform (PUP) list. If that’s the case, Mills would be able to return to the 53-man roster by Week 7 at the earliest.

If Mills has to miss significant time, there’s a chance someone could play well and steal his starting job during his absence. The timing of that wouldn’t be a great development for Mills, who is entering the last year of his rookie contract.

Maddox was one of the top performers from OTAs/minicamp this year.

I’ve said it before and I’ll say it again: Maddox is a baller. The guy just makes plays. While it’s unclear exactly where he’ll line up on the defense this season, it’s perfectly clear that he’s too good to not be on the field. Maddox is poised to build on the potential he showed as a rookie. Doug Pederson specifically highlighted him as a spring standout.

Maddox often lined up as the Eagles’ nickel cornerback during spring practices but he also took reps on the outside when the defense went down to two corners. He did not take safety reps.

At the very least, Maddox should be the Eagles’ primary slot corner in 2019. He probably deserves an even bigger role than that, though, and that should show during training camp/preseason games. The Eagles won’t have any choice but to play him if he keeps making plays.

For the second offseason in a row, Jones failed to stand out during spring practice ... good or bad.

Jones did take a lot of first team outside corner reps with Mills and Darby not practicing. He also managed to stay healthy, which is pretty important for a player who’s missed 72% of possible games in his career.

Jones notably appeared to be behind his teammates on the depth chart, though. When the Eagles would go down to two cornerback packages, it was Maddox and Douglas on the outside with Jones coming off the field.

There’s reason to believe in Jones’ upside. He only turned 23 in May and 2018 was essentially his rookie season. He could get better with experience.

But Jones must stay healthy. He might also need to stay patient because it’s unclear exactly how he fits into this year’s corner puzzle. When Darby gets healthy, he could replace Jones on the first team with Douglas starting opposite and Maddox in the slot. With a strong summer showing, though, Jones could make the case to have Darby replace Douglas.

Jones not playing a ton in 2019 hardly means his Eagles career is over. He could be an important player to have around for 2020 since Darby and Mills could both leave in free agency after this season.

Suuuuul has had a good offseason. After playing well down the stretch in 2018, Douglas impressed while running with the first team defense during OTAs/minicamp.

The 23-year-old defender is in line to be a Week 1 outside starter if at least one of Darby or Mills isn’t ready to play. Douglas could even be more than just a temporary starter if he plays well enough to force the coaching staff to keep hm on the field.

Douglas is aggressive and he’s bound to get beat at times. But he has the ability to make up for those moments by making plays on the ball.

STRAP! The Eagles’ own Mike Scott-esque folk hero is back with the team after standing out late last year. Barring injury, LeBlanc won’t be playing as much as he did in 2018. He might just be a backup slot corner who mainly plays on special teams. In any case, we know that Strap will be ready when his number is called.

You may remember Hawkins from the time a myriad of Eagles cornerback injuries forced Jim Schwartz to play him at corner in the Eagles’ playoff loss to the Saints. Not exactly ideal! Hawkins is back this summer to try he proves he belongs on the roster. The 26-year-old had some nice moments in OTAs/minicamp but he has an uphill battle to make the team.

McKinnon originally joined the Eagles’ practice squad back in late November 2018. The 26-year-old stood out during spring drills but so did De’Vante Bausby last year. We’ll see if McKinnon similarly fades when the pads go on in camp. Even if he does look good, it’s hard to see how McKinnon fits on the 53-man roster with so many other corners ahead of him. Might make sense for the practice squad again if he clears waivers.

Jamalcolm Liggins received the third smallest amount of guaranteed money out of all the Eagles’ undrafted rookie free agent signings. The Dickinson State (NAIA) alumnus is among the longest of long shots on the roster.

How will it play out?

Great question. There isn’t a more fluid position on the Eagles’ roster. Just a lot of moving pieces in this equation.

My best guess is that Darby will be one of the two outside starters. He might miss a game or two but I think he’ll be ready to play at some point in September. Douglas will then start opposite of Darby with Maddox working in the nickel. Maddox will also see some playing time on the outside. Jones is then the fourth corner behind those three.

I’ll guess that Mills goes on PUP. He may or may not have a chance to get his starting job back depending on how players are performing when he’s ready to return.

Strap will be a fifth or sixth corner to have.

Overall, there’s uncertainty with this group. It’s hard to have a ton of confidence when you don’t even know what the lineup is going to look like. The good news is that a lot of these players are young and have upside. The bad news is they’re hardly all proven commodities so you don’t know exactly what to expect.

Training camp and preseason games will be important when it comes to getting a better read on the Eagles’ corner situation. That is, for the sake of observers and the team alike.

Who could be a surprise cut?

LeBlanc getting cut would be the only thing that qualifies as a feasible surprise here. I don’t see it, though. Maybe the Eagles could get good value by trading him to a team desperate for corner help? Probably not.

Speaking of trades, maybe the Eagles would be open to moving Jones? Maybe Joe Douglas would be willing to take that risk for the Jets? Something to ponder.

Hawkins or McKinnon making the team could be a “surprise addition.” Their chances could be helped by Mills going on PUP.

How to Write a Marketing Email

How the heck is the Eagles’ cornerback position going to play out?