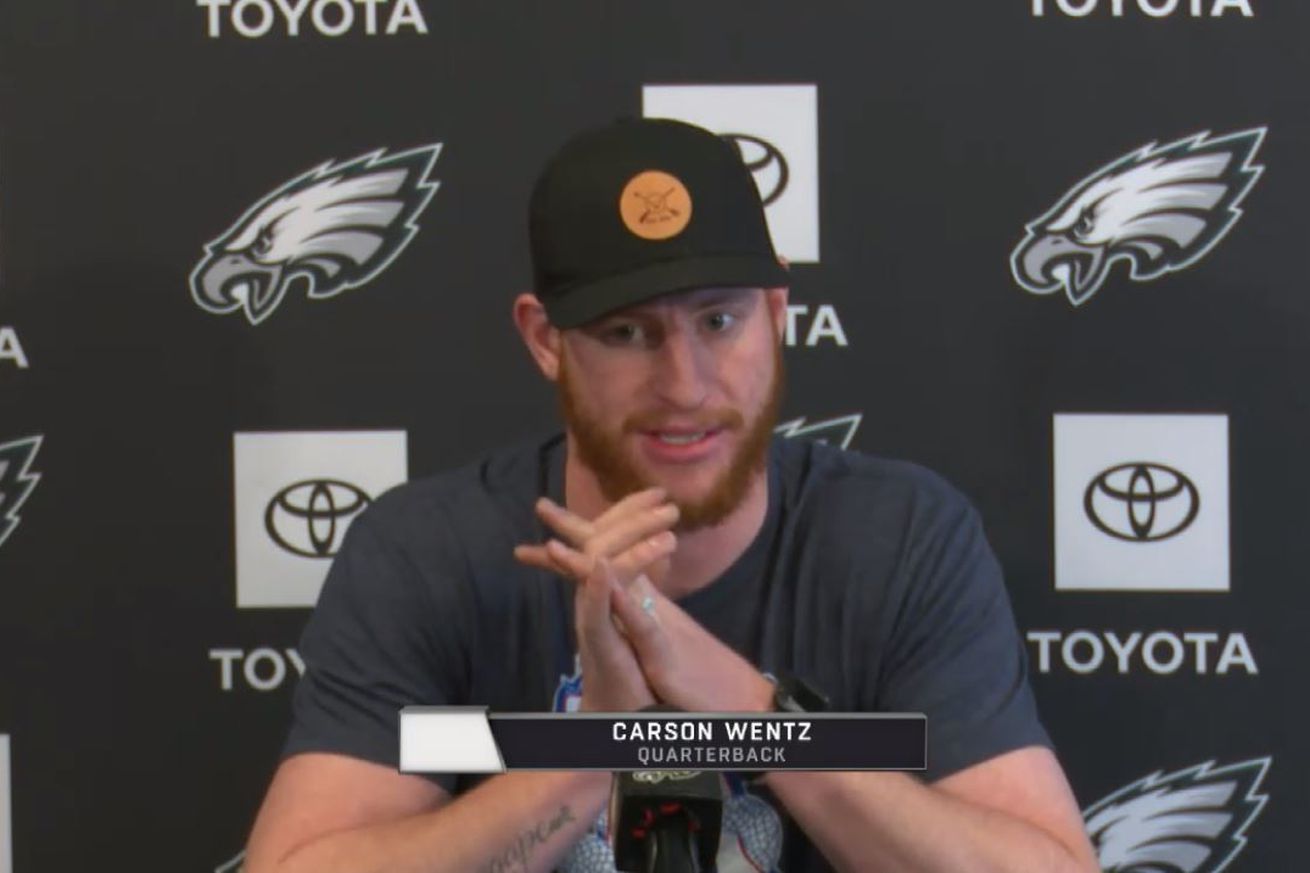 Hear from the Eagles’ franchise quarterback.

Eagles quarterback Carson Wentz was back in the building for the first day of the team’s offseason workout program and was the first player to speak to the media. He was asked about his back injury and how his recovery is going in addition to other notables.

Here’s what the quarterback had to say.

On his back injury and recovery

Wentz is still recovering from the fractured vertebrae that ended his 2018 season early. He said he’s feeling good, and is doing a little bit of running and throwing, and that the goal is still for him to be good to go by OTAs — although, they’re still taking things one step at a time.

REPORTER: Carson, hows the back? Are you fully recovered? And, can you do everything you want to do?

REPORTER: Do you think by the start of OTAs you’ll be able to do everything?

CARSON: That’s the goal, that’s the goal. But there’s really no timetable, no rush, but I feel good with the progression I’ve been on.

REPORTER: Is the bone fully healed then?

CARSON: It’s still getting there. Some of this stuff just takes time, but that’s not really the main concern. It’s just kind of how I feel, and I feel pretty good with where I’m at.

REPORTER: You say you’re running and throwing, are there any restrictions right now?

REPORTER: How much has it impacted your offseason preparation for this upcoming year?

CARSON: I mean, offseason you’re always just trying to get your body healthy, whether you end the season healthy or not, you’re trying to reset yourself. So, I wouldn't say its affected too much, you know, just the same kind of things just focus on a different area this offseason. But, it’s been good.

REPORTER: Are you tired of hearing all of the comments and questions about your durability?

Later on, Wentz talked about how this offseason is different than last year, with the knee recovery being a bit more involved than what he’s dealing with regarding his back, and that his life is a bit calmer — not trying to plan a wedding, etc... — so he’s feeling good with where he’s at overall, both mentally and physically.

Wentz also said that his knee keeps getting stronger and does feel better than it did when he returned to the field last season. He said that they noted it takes awhile for that kind of injury to get back to normal, and he definitely feels like it continues to get stronger.

On his potential upcoming contract extension

On the team being vocal about wanting to extend Wentz, the quarterback said it’s exciting to think about being with the franchise long-term.

“I love it here, I love this city, I love the fans here.”

But, per usual, Wentz wouldn’t dive into the specifics about the contract, and said his agent will handle all of that stuff. Although, he doubled down that the potential to do that is exciting. The QB isn’t super involved in the business aspect of his contract and will leave most of it to his agent.

On his leadership style

He was asked about his comments earlier this offseason about being separate from the team a lot last year as he recovered from his knee injury, and how that might play out again this year. He said that when you’re rehabbing an injury, you’re always a little removed from the rest of the team, but that they were going to try and limit that as much as possible.

But, he knows as far as the leadership and relationship with the guys, that’ll all be organic, and he thinks they’ll be in a good place. He says there’s a lot of opinions about how he and other quarterbacks should be, but his style is to just be who he is, be authentic and let those relationship develop organically.

Wentz says he’s learned a lot about that kind of role since joining the league, and in the past 6-8 months, but he doesn’t feel like as a person he’s really changed.

The QB said that now guys are back in the building they will discuss an offseason “retreat”-like bonding trip, that he’s done in the past.

He later emphasized that he hasn’t really changed as a leader, but has grown and developed, and is no longer the young guy — he admitted he’s not quite a veteran, but has evolved a bit the past couple of years.

On the offense and offseason moves

Wentz was asked his thoughts on getting a speed guy like DeSean Jackson, and the quarterback said “it’s without a doubt exciting”. He went on to say that Jackson is getting up there in age, but he still runs like the wind and is still impressive on film and will bring a dynamic aspect to the Eagles offense this season whether he’s catching balls or just opening things up for others.

He said that being able to keep Nate Sudfeld was exciting, especially with the type of friendship that they have and the working relationship they’ve developed over the years. Wentz says it is different without Nick Foles, but that’s the nature of the business and they’re still excited about what they’ve got.

Wentz also said getting Jordan Howard “was awesome” and that Sudfeld obviously knows him well from their time together at Indiana. The physical ability that he brings to the table is excited, and the quarterback noted that Eagles fans should be excited about Howard on the roster.

He was asked about Doug Pederson alluding to the use of 12-personnel move in the upcoming season, and Wentz wasn’t entirely sure of all the details, but said he was happy that they are building an offense around the talent that they have in the locker room.

The quarterback also said he was excited to have a lot of the offensive line back and that the continuity will help a lot heading into the season. He said that they rely on those “big boys” a lot and that familiarity and friendship will help.

Reflecting on the 2018 season

He was asked to reflect on his play in the 2018 season, and Wentz was honest that he didn’t play well enough and they didn’t win as many games as he would’ve liked. He noted that at the end of the day, the wins are what matter, and they weren’t finishing some of those games the way they wanted.

Wentz said that they came up short of their goals in the postseason as well, but that they’re putting all of that behind them and focusing on this season. He said that Monday felt like the first day of school, and they’re all excited about what’s ahead.

Unrelated to Eagles football, Wentz was wearing a 76ers jersey and was asked about the bond between players from all sports throughout Philadelphia.

“I think it’s just the culture, the sporting culture, in this city. Everyone just loves their sports here and is passionate about it, and it just kind of catches fire within other teams and other athletes. It’s always good to support each other and have some fun with it. But I think it really just comes down to the way this city is with it’s sports and the way they get behind everybody, and we want to do the same.”