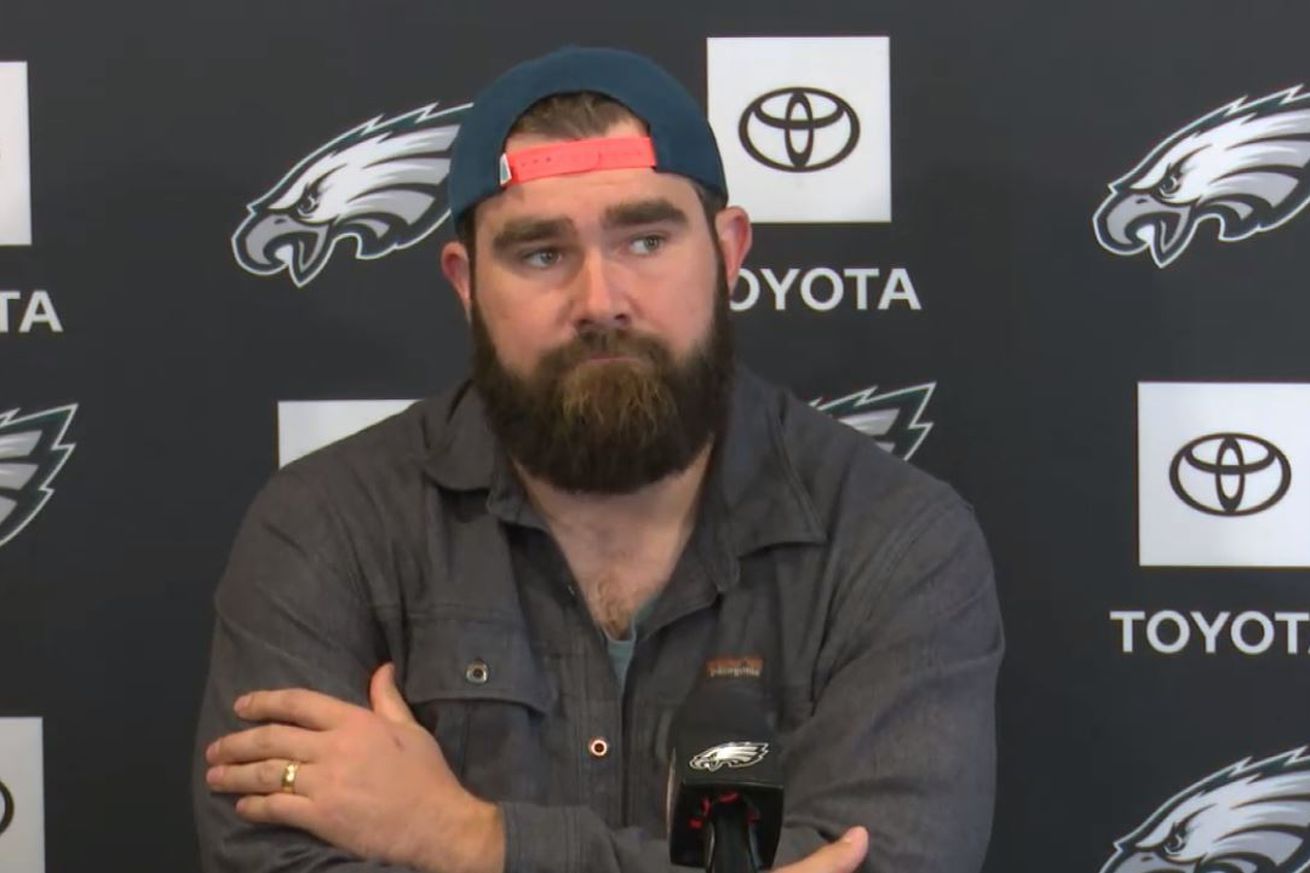 The All Pro center Talked about his decision to return to the game this offseason.

The Eagles returned to the NovaCare Complex on Monday for the beginning of the team’s offseason program. Most of the team and the locker room leaders are back in the building, including Jason Kelce and Zach Ertz.

Is the Dollar Controlling Libra?
10 Elite Special Forces From Around T…
I didn’t time travel this past weeken…
What is Black Hat SEO and how can thi…
How to Find Your Best Small Business …

Here’s what they had to say.

Of course, Kelce steps up to the mic with a beer in hand — because, why not?

On his contract extension and career

To open, he was asked how seriously he was considering not playing anymore:

“I think at the end of the season you kinda wait for your body to get healthy, one. And you to kinda step back, because, you know it’s a long season, especially for older guys, it really starts to wear on your body a little bit more [...] It was very, very clear that I wanted to keep playing at the point when I decided to do that.”

He said he’s not sure what it’ll feel like when he decides not to keep playing, but he got some really good advice from a friend:

Kelce talked about all the things that went into that decision, and he noted that all the reasons to keep playing are still there including, playing the game, being around the guys and competing with guys you care about. He said at this point there’s still too many positives and not enough negatives to keep him from playing.

“The bottom line is, you want to do what you’re comfortable with and what you’re happy with. For me it’s a simple, it’s cost-benefit analysis. How much joy do I get from this game? what’s going to happen by continuing to play? Where’s my body at? Where’s my mind at? All that stuff.

The biggest thing is just, I know I love doing this. I know it makes me happy. I know that I enjoy being a part of this group and these guys and this team, and that makes that decision very, very easy.”

When asked whether he would re-evaluate again after next season, Kelce said he didn’t want to talk too much about it, but that he’s had the same mindset the past 2-3 years, and most older guys probably are.

He said it’s not like it’s a 50-50 feeling, but during the season, as he gets banged up — as he was playing through a grade 2 MCL sprain, a broken foot, other nagging things, a torn elbow, and pretty much had his entire left side bandaged up — those thoughts run through your mind. But that’s why most of the older guys recommend taking some time after the season, heal up a bit, before making those decisions.

Following up on all of those injuries he listed off, Kelce said he did not require any surgery and was as healed up as he’s going to get.

On the state of the roster and locker room

Kelce was asked about what it indicated that the team invested so much in older talent this offseason. He noted that the Eagles have put money into some older guys, but also have a ton of young talent — particularly at the quarterback position — and that it takes a good balance of the two to be successful.

He talked about how this offseason was a little longer than last year, and joked that he wished he was still in that same position, but did like having a bit longer to recovery and heal up.

Kelce also talked about how the locker room changed when DeSean Jackson was no longer with the team, in addition to all the things he does to help on the field. He said he can’t stress how excited the guys are to have him back. And same with Vinny Curry, who is a great teammate and a great guy, with an infectious personality so they’re all fired up to have him back as well.

He also said he wasn’t too surprised that Jason Peters decided to return, saying that the game and being a competitor is so much apart of who he is as a man. Kelce said that as they spoke near the end of the season, he expected Peters to be back for one more.

On the team’s post-season potential

Kelce was asked about being so close to another Super Bowl appearance, and despite many considering the dropped pass to be the difference-maker, he pointed out that they were one injured right guard away from advancing to the NFC Finals.

Kelce been a real one since day one. I appreciate my brudda ✊ https://t.co/XkvNfNOGlg

The center was asked whether this team still had Super Bowl potential, and Kelce quickly answered “yes” and that there is some things to be determined once the guys get on the field together, but they certainly have the talent and hunger for it.

“We got a good locker room, a good culture, and it’s definitely paid dividends the last two years even though we came up a little short last year.”

Kelce also talked to Carson Wentz’s leadership and talent and said that he’s never had any question about his potential since he got there or a day since.

He talked a but about his performance last season and said it’s just like the overall team, there were things he did well and things he needs to do better. Ertz said they met for the first time this offseason, and it was clear that they played well as a tight end group but there’s a lot of room for improvement.

The tight end talked about, not just on the field improvements he wants to make, but to also grow and be a better leader as well. He said they’ve got a lot of talent on offense and it’s going to be about putting that all together.

Ertz talked a bit about his respect for Rob Gronkowski as a player, and how what he was able to do on a game-by-game basis when healthy was unparalleled. But he also said that he puts himself among the top of his position, and there are people who say there are 1-2 guys better than him and his goal is to always be the best.

So, he’s got a chip on his shoulder as he gets back to the field this season, and he’s been training really hard at Stanford this offseason to make those improvements.

It’s not just him either, he noted that a lot of the guys feel slighted with how last season’s playoff run ended, and so they’re hungry to get back and get better.

Later on, he talked a bit about Doug Pederson and said that guys love playing for him because he’s such an easy guy to talk to about things on and off the field and really provides that father-figure type relationship.

On the tight end group and offense

Ertz said that they’ve got a lot of talent at the position, and not just with himself and Dallas Goedert, but also with Richard Rodgers who didn’t really get a chance to show everything he can do. But, Doug Pederson has talked about growing the 12-personnel package is something he’s excited about.

He talked about how DeSean Jackson can help open them up a bit, and that Goedert is a player that he thinks will be a really good, longterm player in the league. He said, he’s really developed as a blocking tight end, and can make plays with the ball.

Ertz joked though that it’s all easy to talk about in theory in early-April, but there’s a lot of offseason left to make it work in practice.

The tight end talked a bit about being excited to have Jordan Howard on the offense and that missing out on Jay Ajayi last year bogged things down a bit. He noted that Howard should be able to open things up, and he’s excited to have him.

Ertz also talked about DeSean Jackson and his explosive ability, saying that the team hasn’t really had that since he left. He pointed out that Jeremy Maclin had a little bit of that, but nothing like the 70-yard run they were the victims of last year against the Bucs.

He was asked what Wentz has to prove this season, and Ertz noted that he’s already shown the type of potential he has. He said that the quarterback wasn’t fully healthy last season and had a broken back early on in the season.

Ertz said one of Carson’s goals is to lead the team into the postseason and has lofty goals within the organization as well — something the tight end thinks he’ll be able to accomplish. He initially said that Wentz didn’t have an exact idea of when the injury actually happened, and when later asked to clarify, say he probably already said too much and would leave it to the quarterback to discuss.

Ertz was asked if the QBs goal was to be on the field for 16 games and prove he can stay healthy, but the tight end noted that’s everyone’s goal. At the beginning of the year, everyone just wants to stay healthy and be able to make it through the entire season.