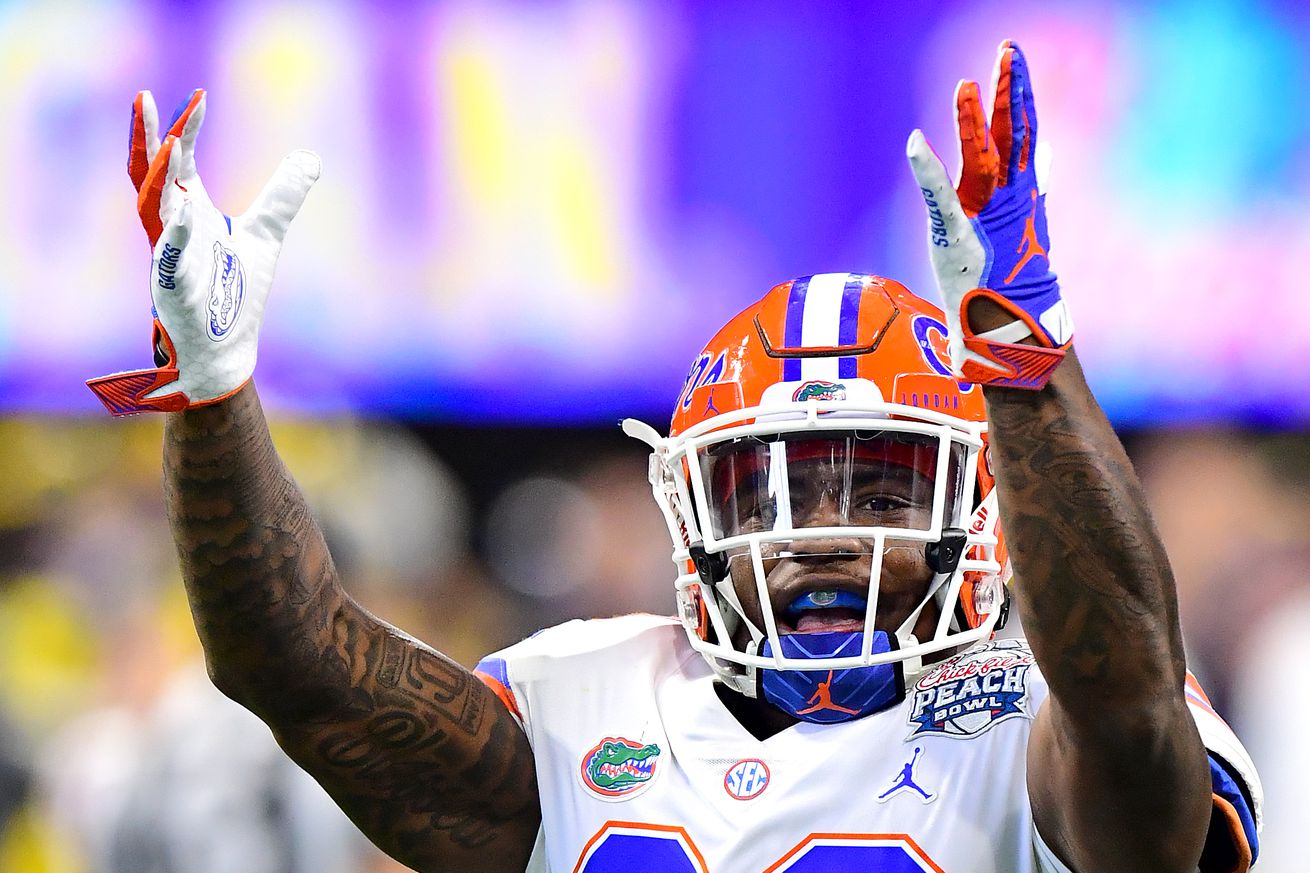 Jack-all-trades, moveable chess-piece, Swiss Army Knife. Use whichever cliché you’d like, but make no mistake about it – CGJ is a versatile DB with a high ceiling. For a long time “free” and “strong” have been the terms used to differentiate between roles at the safety position. In the modern NFL, these buckets lack necessary nuance. I prefer to think of the positions in four roles, as laid out by Jon Ledyard of The Draft Network: Single high, two-high, slot, and box. The beauty of Chauncey Gardner-Johnson is the he can play each of these – it is this versatility which lands him at SAF1 in my eyes.

Coverage: Chauncey’s speed, twitchiness, and change-of-direction skills give him all of the tools to be an excellent man-coverage defender. His route recognition and break anticipation could benefit from improved consistency to really put him over the top here. In 2018, CGJ got a lot of play as a slot defender, and proved excellent at fighting through contact and sticking though the route break, while his explosiveness and closing ability in underneath zones jumped off the tape. Though he did not play in a single-high assignment with frequency in 2018, his 2017 tape proved him to be a capable centerfield defender, with the necessary range and ball skills to man the back end.

Run Defense: While he will never be mistaken for the quasi-LB box safety archetype, like a Mark Barron, Chauncey’s college tape shows a strong skills in playing the run. Quick diagnosis flows into a committed downhill attack, and while his 2017 tape displayed inconsistent tackling ability, the 2018 version of CGJ showed a marked improvement.

Mental Processing: In a physical and often violent game, the safety position is one that allows cerebral skills to be a true differentiator. Gardner-Johnson is an instinctive defender, capable of quickly diagnosing a play and seamlessly break on the ball with no hesitation or delay. Trusts his eyes and frequently jumps routes, displaying excellent ball skills at times. Again, consistency is where the rub lies. His trust in his eyes can lead to being beaten on double moves, and leave him out of position when he incorrectly predicts the route. Improvement in this consistency at the next level will allow his rapid processing and closing ability to shine, and unlock a vast ceiling.

The departure of Earl Thomas leaves marks the final toll of the bell for the once-great Legion of Boom. At the peak of the Thomas/Chancellor days, Seattle employed a straightforward box/single-high safety scheme, with Chancellor playing the underneath and Thomas manning the back end. However, with the proliferation of the spread offense, as well as an NFL that has become adept at diagnosing single-high coverage, we’ve seen an evolution in Seattle – one that became more profound after the injury to ET-III. This new-look Pete Carroll defense, a defensive back is rarely asked to provided boundary-to-boundary coverage on over the top of the D. Instead, a ‘weapon’ style safety will be employed – sometimes covering a dynamic tight end - but often patrolling the middle, diagnosing the play, and closing quickly in smaller zones. Conveniently, these are all roles that CGJ excels in. Combined with his reliability in a more Thomas-esque centerfield role, Gardner Johnson would allow Seattle to terrorize offensive minds with a diverse and versatile scheme.

2017 and 2018 tape presents a Tale of Two Chaunceys. Put on his 2017 tape, and you’d be evaluating a tantalizing playmaker, and reliable coverage DB – but an atrocious tackler. Fast-forward to 2018, and you’ll find a prospect lacking in consistent break recognition, but with much-improved tackling, and a newfound fire for fighting through physicality. The reality is, his floor in each area is not very low, and his ceiling is astronomical. Chauncey Gardner-Johnson projects as a Day-One contributor in either an underneath/slot role or as a traditional high-safety. Continued growth in the area of consistency will allow him to become a true defensive weapon for the modern NFL.

While highlight compilations are a terrible scouting tool, and anyone making evaluations based on them should probably rethink what they’re doing with their life, they can be a fun way to get a feel for a player’s ceiling. Enjoy the below CGJ reel, and please try not to drool.

Now it’s time for you to vote for who YOU think the Seahawks should pick in the 2019 BGN Community Consensus Mock Draft.