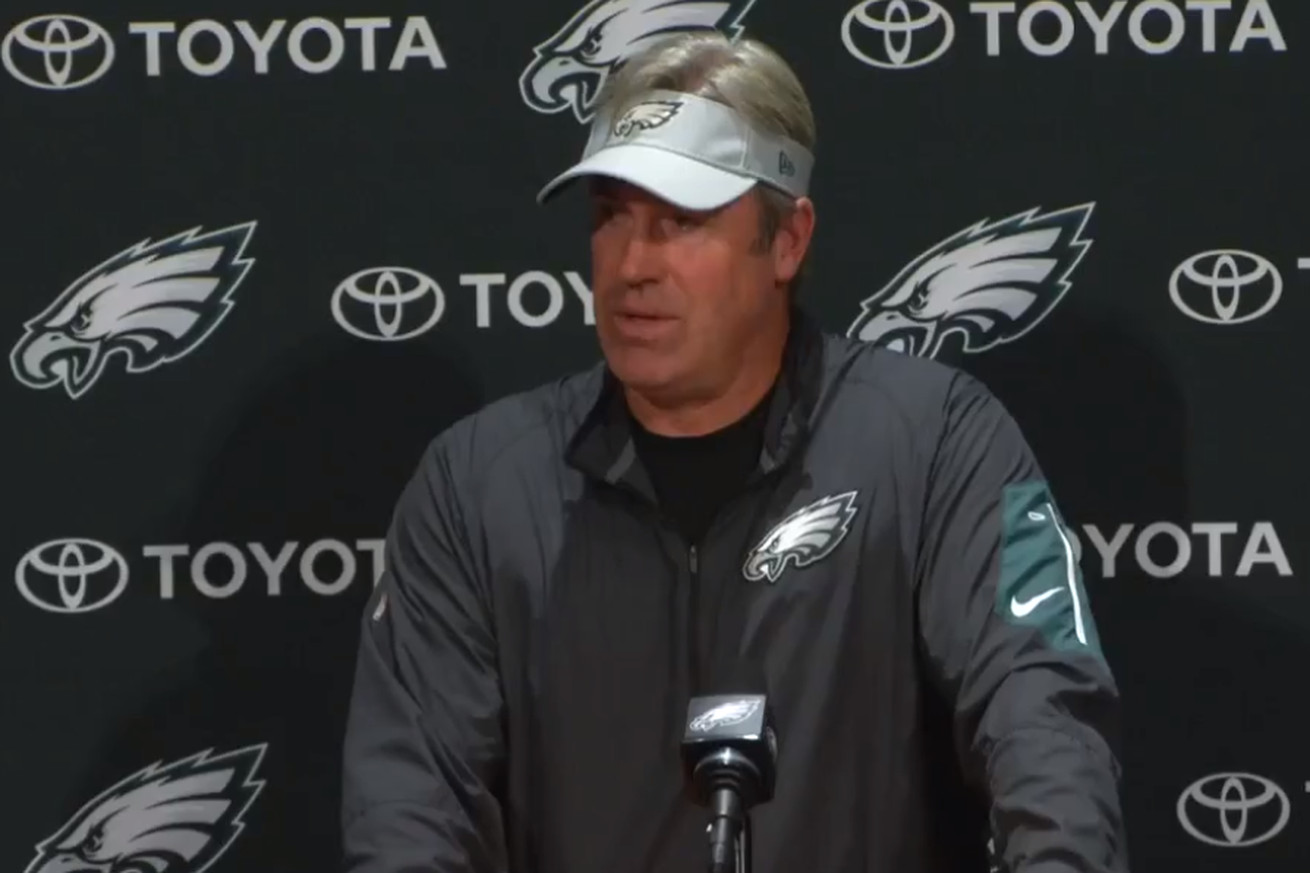 The head Coach also talked about how Carson Wentz and Nick Foles are handling the QB situation.

Now that we’re a week removed from the White House fiasco, and are officially done with OTAs, the Eagles have made their way back to the NovaCare Complex for mandatory minicamp. Yesterday was the team’s media day, with players posing for SNF promos and scoreboard spots, but today is the first day they take the field.

Help For The Inner Journey
How to Become a Successful Affiliate …
Coach Depression sent in the play, wh…
How to Find Your Best Small Business …
Use the past to improve the future

Doug Pederson spoke to reporters ahead of practice, and gave some updates on some of the position battles and injuries. The head coach was excited that everyone was in attendance and that they are ready to move past the Super Bowl honeymoon and make a statement in 2018.

On the QB room

Pederson continues to be impressed with how Carson Wentz and Nick Foles are handling the situation in the QB room, and credits their relationship and support for each other in 2017 that lends to that dynamic.

“Nick supported Carson during the season last year, then Carson supported Nick at the end,” the head coach explained. Their relationship is “really good” whether they’re working together in the class room or on the field, there’s a “really good dynamic between the two”.

When asked about whether Foles deserved to take the first snap in the season opener, Pederson wasn’t quite willing to commit just yet. He did, however, made note that, “right now, today, that’s the case because Carson isn’t ready.”

But the head coach made sure to point out that we won’t have a definitive answer about who the Game 1 starter will be until closer to September. He acknowledges though, that outside of the Eagles’ facility, he could see why fans would think Foles deserves the opportunity — and agrees that he does — but that ultimately this is still Carson Wentz’s team.

“Inside he’s very hungry. I would be. As the leader of the team, sort of the face of the franchise, he was drafted to be our guy long term,” Pederson explained about Wentz wanting to get back onto the field. “Listen, I still think this is Carson’s team. I don’t think differently.”

Pederson was asked to further walk us through the relationship and dynamic between the two Philly QBs. He explained that “the dialogue is unbelievable” and that they are constantly challenging each other.

The head coach also mentioned that “Nate’s having a tremendous spring,” giving Sudfeld a bit of security at the No. 3 QB spot on the roster.

Pederson was asked how the veteran running back would be used once he’s cleared to return to the field, and he repeated how important it was for the team to wait until he was 100% again before making any final decisions.

“Obviously special teams is huge,” Pederson admitted. “Offensively, much like he did the first year. When he’s ready to go and he’s back out there, he’ll be a mix in the rotation of guys like we’ve done the past couple of season.”

Pederson seemed eager to get Sproles back on the field, touting the rushers intelligence and especially how he understands protection, which is important in third-down situations. The head coach was “very pleased where he’s at” and admits that the running back is “ready to get back out there and go full speed”.

With the recent changes to kick-offs, Pederson was asked if Sproles might be used on KO returns as well as on punts. It’s still a little early for the coaching staff to know how they are going to handle the new rules, but as they finalize their game plan, Sproles may be considered for different roles.

The newly acquired DE is ready to get to work with his new team, and Pederson and staff are excited to finally get the opportunity to work with him. Pederson noted that Bennett will be out there with the first unit, but they aren’t so worried about where he’s lining up at the moment. Given that Bennett can play on the inside at tackle or at defensive end, they’ll rotate him throughout the line to get an idea of how best to use him during the season.

Pederson also noted that as of right now, there is no depth chart. They’re trying to get as many players rotating in and out of different positions, get everyone involved, and then start making some of those roster decisions during training camp in July.

Turning the page on the Super Bowl

Doug Pederson was asked when the team will be turning the page on the Super Bowl win and start really focusing on the 2018 season. The head coach quickly answered, “12:01 a.m. on June 15th”. There was a bit of pause before the reporter checked whether or not he was being sarcastic. Pederson explained that the day after the ring ceremony will be when they completely shift their focus from the celebrations to the next set of goals.

He acknowledges that the rest of the city will continue celebrating for a long time, and that even in the future, every time these guys come back to the city, it’ll be something to celebrate — “But for us, we need to focus on 2018 and get ready for training camp.”

Pederson was asked if there was a fine line between moving on from the Super Bowl and using it as motivation. The head coach noted it’s not something he wants the team to forget about, but you have to use that as motivation to get back to the game the next season -- admitting he still remembers the Super Bowl he won with the Packers, and still has shirts and memorabilia.

Ultimately, the win will go down in Philadelphia history and will be something that fans and the city celebrate forever. Pederson said he wanted the players to embrace the win, “rip off the dog masks” and get ready to be the hunted, the team with the target on their back.

The number one priority for the coaches this week is to “keep everybody healthy”. Pederson was asked for his three prime objectives for the mandatory minicamp, and he pretty much re-iterated no more injuries three times.

He appreciated that minicamp is “a chance to get the whole team together for the first time. It kind of spring boards us into training camp.”

Mainly, Pederson wants to keep guys healthy and get them focused and motivated for training camp.

On not having Brian Dawkins around the team now

Pederson admitted “anytime you have a Hall of Famer around your team” — especially one that played for the team — has an impact on the locker room. “It was great to have him here,” the head coach noted, but also we’ve got some guys on this team, on this roster who can have the same type of impact.”