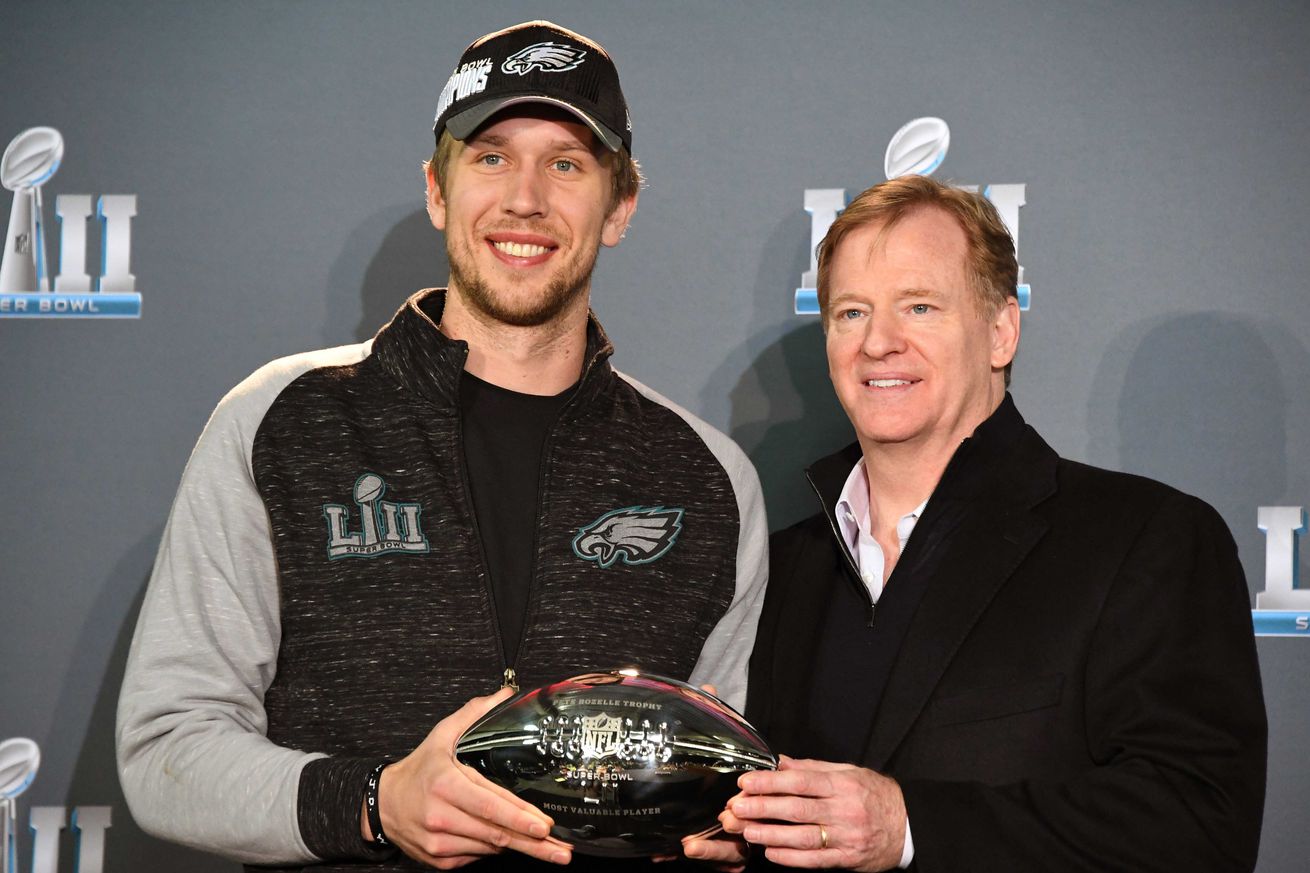 Philadelphia Eagles news and links for 2/14/18.

Ten Things I Think I Think About Frank Reich, the Colts’ New Head Coach - Sports Illustrated
I don’t think Philly trades quarterback Nick Foles, unless some team makes an offer that start with two first-round picks. Even then, I’m skeptical they’d pull the trigger. This is why they got Foles in the first place—because GM Howie Roseman and Pederson think the backup quarterback is one of the 10 or 12 most important players on the team.

Eagles have a lot of questions to answer at running back - BGN
Jay Ajayi’s workload increased as the season progressed. He averaged 7.25 carries per game in his first four games. He then averaged 13.8 per game in his final six games. With this in mind, Ajayi figures to be the Eagles’ primary back in 2018. Doug Pederson will still almost certainly use a rotation, but Ajayi is the main man. That’s the simple part. Now here’s where it gets complicated. Ajayi is set to be a free agent after the 2018 season. The Eagles can extend him as soon as this offseason, but it’s hard to imagine they’d do so given concerns about the long-term health of his knees. In other words, the 24-year-old Ajayi is almost certainly the Eagles’ primary running back in 2018, but his reign might not go beyond then. If that’s the case, the Eagles already need to be thinking about the future of the position. On the other hand, Philly might feel comfortable enough with him as a long-term piece. Really hard to tell.

Eagles-only 2018 mock draft, version 1.0 - PhillyVoice
In 2017, Hurst had 59 tackles (13 for loss) 5.5 sacks, and a forced fumble. Those numbers aren’t great, but make no mistake, Maurice Hurst is awesome. He’s quick, fast, he sheds blocks, and he constantly makes plays on the other side of the line of scrimmage. A highlight reel from 2017. There’s no earthly reason Hurst should be available at pick 32, but it has happened with undersized defensive tackles in the past. At 6’2, 280, Hurst is far from a prototypical defensive tackle. Geno Atkins fell all the way to the fourth round in 2010, and Aaron Donald to the 13th overall pick in 2014, despite being clearly more talented than many of the players taken before him. Has the NFL learned their lesson on that?

Dear Tedy - Iggles Blitz
What a jackass. Instead of simply going on ESPN to tell stories about how the Patriots did have fun, he decided to rip on Johnson and the Eagles. Oh he casually mentioned laughing in meetings and listening to music on planes, but a good, specific story would have carried a lot more weight than a generic “We had a lot of fun” comment.

Stay or go? Cap-strapped Eagles faced with key personnel decisions - ESPN
Linebacker Nigel Bradham, running backs LeGarrette Blount and Darren Sproles, cornerback Patrick Robinson, defensive tackle Beau Allen and tight end Trey Burton, thrower of the “Philly Special,” are among the notable pending free agents. Bradham (85 tackles, 5 TFL, sack, 8 passes defensed) has turned into a vital part of Jim Schwartz’s defense. It would be no surprise if the Eagles prioritized re-signing him, especially given the lack of depth and health concerns with Jordan Hicks. Robinson was signed to a one-year, $775,000 deal last offseason and developed into one of the better slot corners in the game. His price tag is going to go up -- probably way up -- and it could be difficult for Philly to justify re-signing him, especially with Sidney Jones back from an Achilles injury and in line for playing time along with Ronald Darby and Jalen Mills. When it comes to Sproles and Blount, it could come down to what the market bears. Both are valuable to the team, but with Jay Ajayi and Corey Clement in the fold, they don’t need to force the issue.

In QB Room, Eagles Have A Great Situation - PE.com
Don’t look now, but the start of the NFL’s 2018 business year begins four weeks from Wednesday, on March 14 to be exact, and the Eagles are just like every other team: Tough decisions are to be made. Salary caps are to be put in the best position possible. Free-agency strategy goes into effect. Roster evaluation ramps up ...

History says no repeat, but these Eagles could buck the trend - NBC Sports Philadelphia
OK, all that said, I fully expect the Eagles to be right back in the thick of things next year. I like that Doug Pederson didn’t waste any time setting the tone for 2018. His message was that this group, this nucleus, has a chance to accomplish something extraordinary over the coming seasons if the players return in 2018 with the same attitude they had this year. He didn’t shy away from dynasty talk. He didn’t shy away from wanting to be Belichick or Gibbs or Walsh. I’m sure every Super Bowl coach has had that same conversation with his team, but I believe this team has a very good chance at sustained success for one big reason: Doug.

NFL free agency 2018: Five veterans the Super Bowl champion Eagles could target - CBS Sports
FB Anthony Sherman: Fullbacks have been phased out of today’s game, yes, but Doug Pederson was adamant early in his Eagles tenure that he at least wanted to toy with the position. With an aging Brent Celek likely on the way out and Trey Burton also set to hit free agency, Philadelphia might be pressed for blocking help, and Sherman, a diamond in the rough for old pal Andy Reid in Kansas City, offers just that. The former All-Pro, who could aid in clearing holes for a rushing tandem of Jay Ajayi and Corey Clement, is also a special teams standout, which always makes for 53-man value.

How Philadelphia used analytics to win the Super Bowl - The Power Rank
Doug Pederson: “I think where the numbers and analytics comes in is by field position, by down and distance, and win probability of the success rate of getting that fourth down. I’m constantly being communicated with. I have a coach upstairs that’s giving me this information real time, game day. Hey coach, if we can get it to 4th and 2, 4th and 3, this is the success rate here in this situation. Now ultimately, it’s my decision whether to go for it in those situations. But as our numbers have shown, I’ve elected to go for it on 4th down more than most.”

Brandt: How the Eagles should handle Foles; why the 49ers did well with Garoppolo deal - The Athletic
A quick decision on Foles . . . or not. Foles’ contract ensures a relatively quick decision on his status. It contains a $3 million roster bonus due March 18th, a few days after the opening of the 2018 league year. Of course, the Eagles could try to renegotiate Foles’ contract before that, adding more money in 2018 in exchange for a year or years added to the contract, but I see no reason why Foles would do that. And, I doubt the Eagles would move Foles after handing him $3 million. Or would they? This is the same team that paid Sam Bradford an $11 million signing bonus in February of 2016 and then traded him six months later — before he played a game on that contract – in exchange for a first-round pick from the Vikings. If the Eagles were willing to eat $11 million for a first-round pick, I suppose they would be willing to eat $3 million for a second-round pick. With Trader Howie as general manager, nothing can be ruled out.

The Eagles found depth and won a title, can the Cowboys do the same? - Blogging The Boys
[BLG Note: I love how BTB is obsessed with trying to become the Eagles.]

Highlights of Frank Reich’s Introductory Press Conference with the Colts - Stampede Blue
The long wait for a few words from the new Colts head coach is finally over. Today, Frank Reich spoke with the media at Lucas Oil Stadium for his introductory press conference. He laid out his vision for the team and answered some important questions. We will present some of the highlights from the press conference here as we believe that these comments and answers will be of particular interest to Colts fans.

7 NFL players who could be surprisingly cut this offseason - SB Nation
Dez Bryant is the third member of Dallas’ latest big three alongside Dak Prescott and Ezekiel Elliott, but his waning production and inability to live up to 2014’s All-Pro standard may make him a cap casualty in 2018. The Cowboys have $19 million in space this offseason according to Over the Cap, and they’ll have to dedicate a major chunk of that to re-signing Demarcus Lawrence if they want to keep their pass-rushing defensive end in blue and white. That could present an either/or situation between Lawrence and Bryant. Bryant played in 16 games for the first time since ‘14 this season, but had only 69 receptions and six touchdowns as Dallas underwhelmed. His one saving grace may be the team’s lack of production at wideout; Bryant’s 838 receiving yards were nearly 300 more than the team’s next-closest contributor.