Film Room: How the Eagles beat the Vikings in 2016 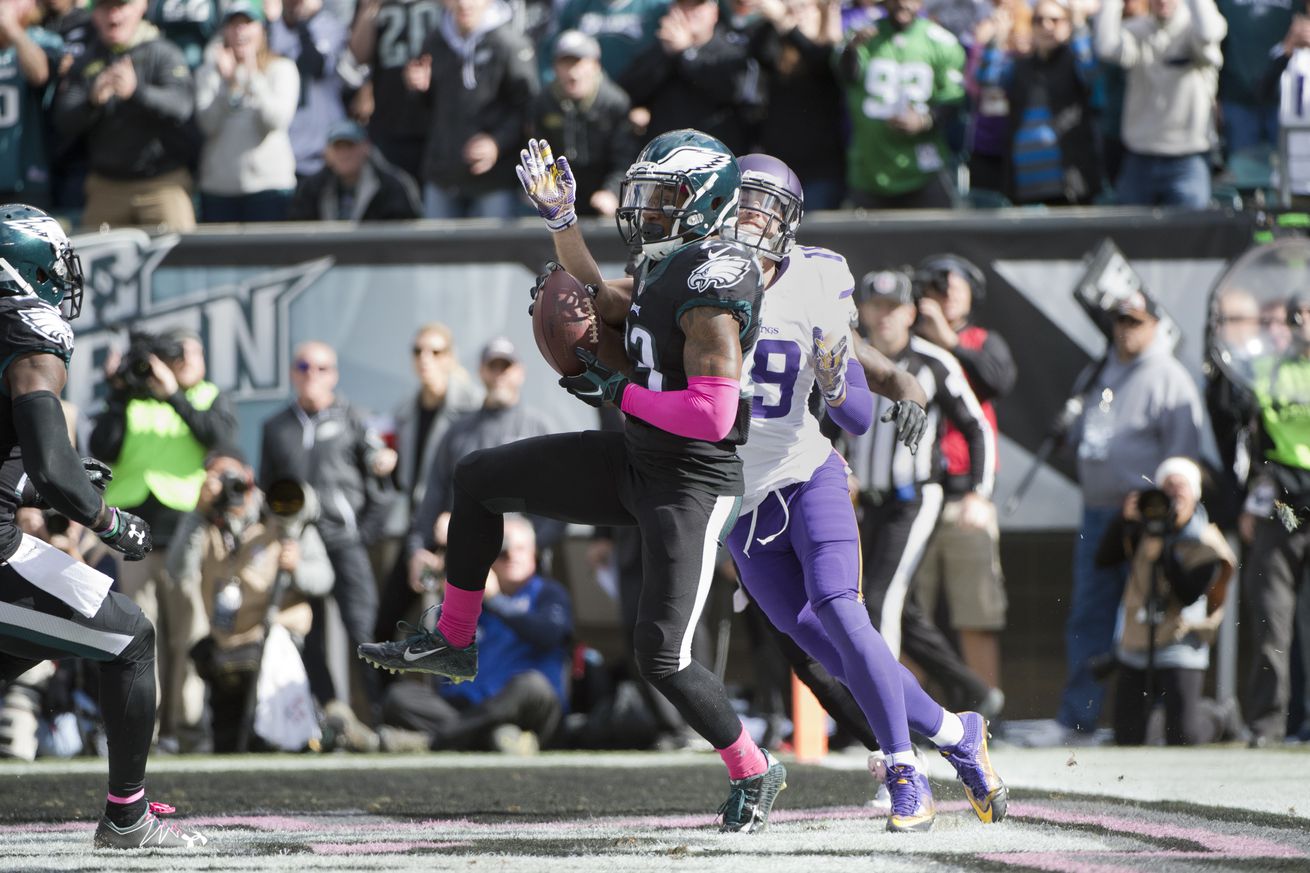 Looking back to the past to preview the future.

UPDATE: This post was originally published on Oct. 26, 2016 -- three days after the Eagles defeated the Vikings by a final score of 21 to 10 in a Week 7 regular season game. With the Eagles set to host Minnesota in the NFC Championship Game this Sunday, I wanted to bring it back up. A lot of things have obviously changed since last year’s game but there are some ideas worth revisiting. Nice breakdown (as always) here by Jonny. — Brandon Lee Gowton

So, Carson Wentz didn’t have a very good game. I will say this though, after a really poor start he did get it together and manage the game fine. I thought Doug had too much faith in him earlier, I wouldn’t have let him throw it on 3rd and long against this defense. Wentz was off early, the Vikings tried to confuse him with some coverages and they got in his head I think. Let’s look at the bad straight away.

Not much to say about the first play, he just doesn’t see Celek wide open. He doesn’t have long to set his feet but he didn’t see him. It’s the only play I found where I thought he totally missed someone running open.

The interception is odd. It’s an awful route by Agholor, I think he’s meant to be running a post and DGB should be running a dig on the opposite side. Agholor is so slow to get up the field they basically run into each other though. The Vikings coverage is so clever too, Harrison Smith looks like he’s blitzing then he covers the receiver and they play cover 2. It fools Wentz and I’m not surprised it does to be honest. This is why the Vikings defense is so good.

Let’s look at some of Wentz’ good stuff though because the way he recovered was impressive. He could have collapsed but he didn’t and kept fighting on and made some plays at the end which helped the Eagles win the game.

His ability to improvise is so impressive. It’s not only about being fast or athletic, it’s about being calm and staying relaxed even when everything is going wrong around you. It says a lot about him as a person and as a player in my opinion.

I like the placement on these tho throws. I think DGB gets this and avoids the safety on 2nd throw. pic.twitter.com/g67vVYD7PS

The route by DGB is good here and it’s clearly pass interference. I linked these two plays because I think they show good ball placement. I really think this throw is going straight to DGB if you look at where it lands. On the throw to Jordan Matthews, he sees that the safety is coming down and he throws it slightly behind him so he can still get the completion.

The Vikings played a lot of man coverage as every team does against the Eagles and the Eagles couldn’t really separate or stretch the field as usual.

The offensive line was pretty solid in pass protection against a good defense. Big V had a really good comeback, I’ll touch on him some more later. I thought Jason Peters was excellent and had his best game of the year too.

The Eagles running game was inconsistent again but I thought overall it was pretty good against a really good run defense. They got it going in the second half and managed to have some long drives using the running game as the foundation. Ryan Matthews played well but he simply can’t fumble at the end like he did. I really enjoyed this play in particular because of the blocking.

Peters and Allen Barbre’s blocks are really good but Brandon Brooks is my favorite. For such a big dude, Brooks has really light and quick feet and you can see that here. It’s almost funny how he moves when looking for someone to block, it’s so graceful. He never really destroys anyone when he blocks but he gets the job done and that’s what matters.

So how did Big V play? He played well. Yes, the Eagles gave him help and ran away from his side a lot. But he wasn’t a liability and made some nice blocks. Here are my 3 favorite from the game - yes the first one is in pass protection but I wanted to show it anyway!

Even Big V made some lovely blocks! pic.twitter.com/FgUEVtYT1y

You can see he’s a lot more calm, he’s getting into his pass set quicker and on the running plays he’s initiating contact with the defensive lineman and has the confidence to take them on. I really like the way that he didn’t lunge for most of the game. Lunging is my number one thing to look out for with offensive lineman and he stayed upright and showed a good punch throughout the game on a number of occasions.

The cornerbacks didn’t have to cover for long at all because the Eagles got so much pressure but all the cornerbacks played fine. Jalen Mills and Leodis McKelvin rotated which was interesting. Jenkins was good when he moved into the slot and Jaylen Watkins played well at safety.

The pass rush was excellent all game and Jim Schwartz finally started to blitz, happy to see Schwartz has been reading my columns the last few weeks! I do wonder if the Eagles had blitzed Cousins like they blitzed Bradford whether that Redskins game would have gone differently. The Eagles got pressure without blitzing too though, these two pressures by Brandon Graham are hugely important.

Two huge plays by BG that stopped a big play and caused an INT pic.twitter.com/G5AKzPYfNe

Carroll is beat at the top of the screen, Bradford probably makes that deep throw if Graham doesn’t pressure him. The second clip is the interception by Bradford that’s almost certainly caused by Graham’s pressure. Rodney McLeod had an awesome game in coverage and coming downhill too.

The Eagles played a ton more zone this week too. It’s clear Schwartz is definitely reading my posts now. I’ve been calling for the Eagles to run zone for weeks now and the change up worked. The Eagles confused Bradford on a few occasions which is not something Schwartz’ defenses are known for. Bradford was clearly struggling to handle the pressure, he made a number of uncharacteristic throws and played really fast all game. Whereas Wentz calmed down and managed the game, Bradford never really found a rhythm.

Let’s take a look at some of my favorite blitzes from Sunday.

On the first blitz, the standout performers are Jaylen Watkins coming round the outside and Bradham and Graham who both shed blocks. The Eagles had no problem shedding the Vikings offensive line’s blocks all night. The second blitz is another overload but this time from the opposite side. Rodney McLeod sneaks up into the box at the last minute and timed his blitz to absolute perfection. This is such a great play by Mychal Kendricks too who made some plays this game. I’ve said all along, if you use Kendricks correctly, he’s still a good player to have.

The 3rd blitz looks like a standard inside linebacker blitz but Jenkins comes from slot cornerback and Bradford doesn’t see him. You can’t run this blitz if your safety at the time (Watkins) can’t step up and cover the slot wide receiver. Hicks cleans up and gets a sack that he deserved for his overall performance. The 4th blitz techincally isn’t because they only send 4 rushers but it works so well so I’m showing it anyway! Cox drops out and Bradham rushes the quarterback instead and Bradham gets a big sack. This wasn’t the only time Cox dropped into coverage either.

Watkins all over Rudolph pic.twitter.com/ubFrtFimdX

This was on 4th down and it basically ended any chance the Vikings had at a comeback. Watkins plays this ball beautifully and Kyle Rudolph isn’t an easy guy to cover. Watkins has been impressive this year when on the field.

The Eagles run defense was so much better than last weeks it was almost like watching another team. It was almost perfect the entire game. The defensive line didn’t charge upfield but instead they controlled their gaps much more effectively, the linebackers plugged the gaps well too, the team set the edge a lot better as a whole and they got the safety’s much closer to the line of scrimmage so they could impact the run as you can see below.

The front 7 gives the running back nowhere to go and Jenkins comes down and finishes off the play in these two clips. Jenkins is an odd player because I still don’t know where I like him best. I think it might be in the box but then his coverage skills are so good too. I said this in my post about Jenkins in the off-season and it’s still true today ‘everyone wants a Malcolm Jenkins on their roster now’.

Marcus Smith’s run defense has been really good too the past few weeks and I enjoyed how he set the edge here.

He’s not great, but Smith isn’t terrible anymore. Fletcher Cox also came out to play Sunday both against the run and the pass.

Man Dog at DE or DT is always enjoyable. pic.twitter.com/3kYYhwOmQV

Man Dog. Yes, the second clip isn’t against the run but I will have to combine clips at times as it means I can show you more stuff. The first clip is insane, he just tosses his guy out the way. Trying to block Cox with one blocker is very risky indeed. Beau Allen also had a very nice game, he’s turned into a very good backup and a more than capable starter. Not bad for a 7th round pick.

Let’s end this week with my favorite defensive player to watch: Jordan Hicks. He’s incredible. He glides around the pitch, he moves so quickly yet so elegantly and he’s such an intelligent player.

Hicks is still my favorite defensive player to watch. pic.twitter.com/QpOxdCaDFJ

I love these two plays so much. He’s super fast, decisive and makes two big plays. There’s been some silly questions recently about whether he can play 4-3 MLB. Yes he can. End of discussion. He can shed blocks, come downhill fast, make plays sideline to sideline and can cover. What more do you want?

Film Room: How the Eagles beat the Vikings in 2016