Eagles-Bears Final Score: Observations from Philadelphia’s win over Chicago, 31 to 3 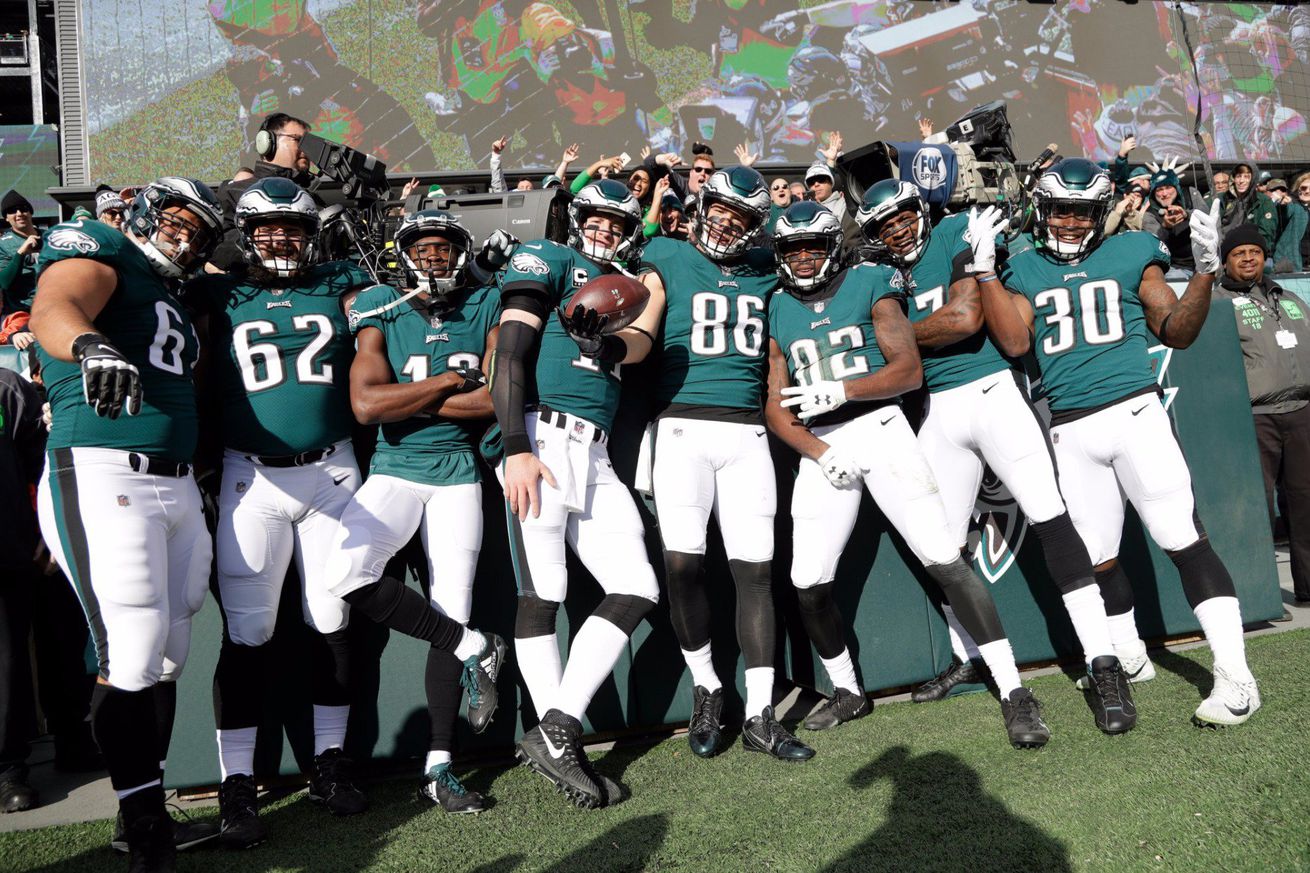 The Philadelphia Eagles DEFEATED the Chicago Bears on Sunday at Lincoln Financial Field by a final score of 31 to 3. The Eagles advanced to 10-1 on the 2017 NFL regular season. Read on for a recap and observations from the game. Up next for Philadelphia is a road game against the Seahawks. Watch the BGN Radio postgame show LIVE in the video below (click here if you can’t see it).

Eagles send out Jason Peters along with the captain for the coin toss. Pretty cool. Chicago wins the toss and elects to defer. Eagles offense up first.

Carson Wentz throws to Alshon Jeffery on the first play of the game for a 5-Yard gain. Who could’ve guessed? Wentz hits Zach Ertz for a first down, then LeGarrette Blount barrels forward for another. Blount loses yards on the next two carries to put Philly in 3rd-and-13. Lane Johnson false start, 3rd-and-18. Screen pass to Torrey Smith on third down brings up a punt.

Donnie Jones pins the Bears deep at their own 5-yard line. Mitchell Trubisky throws to Adam Shaheen and Ronald Darby is right there for the tackle, 1-yard gain. Bears pick up four yards on a Jordan Howard run. Trubisky’s third down pass is incomplete after the quarterback gets pressured out of the pocket. Good coverage down the field.

A bad punt from the Bears goes only 34 yards. Eagles take over at Chicago’s 44-yard line. Jay Ajayi drops Wentz’s checkdown on first down. An Ajayi carry goes for no gain. Wentz hits Ertz short of the sticks to bring up 4th-and-1. Doug Pederson goes for it. Ajayi picks up the first. Wentz hits Jeffery on 3rd-and-8 to move the Eagles into the red zone. Then he hits Ertz up the seam for a score. Boom. Jake Elliott nails the PAT, his first game kick attempt since returning from the concussion he suffered last week. Eagles lead, 7-0.

Wentz to Ertz! .... feel like we’ve heard that before

Elliott’s kickoff goes out of bounds. Not good. (Bring back Kamu Grugier-Hill!) Bears start at the 40. Trubisky’s pass gets tipped and picked off by Malcolm Jenkins! But then he fumbles it on the return and the Bears recover. Just go down, Malcolm. There was nothing there. Tim Jernigan bails Jenkins out by stuffing a run on 3rd-and-2 and forcing the Beats to punt.

On first down, Blount runs for a big gain and then fumbles. Hey, maybe stop doing that!

Chicago commits an illegal block that sets them back. Bears up 18 yards on 3rd-and-21 to put them in field goal range. 55-yard attempt by Cairo Santos is well short of crossbar. Off target, too.

Impressive throw from Wentz to Jeffery picks up a first on 3rd-and-long. Great example of Jeffery’s catch radius coming into handy. Jeffery gets tackled before the ball gets to him on 2nd-and-9, no call. On third down, Wentz spins out of pressure and runs for a big gain. The dude is unreal. He turned a blown-up screen into a first. Love that first down celebration afterwards, too. Let them know who’s boss. Mack Hollins draws a holding penalty to give the Eagles another first in the red zone. Wentz throws to Nelson Agholor on a bubble screen and outruns the Bears defense for a touchdown. Nice leaping effort by Nelly to get the score. Crazy how dangerous he’s become after the catch. Eagles lead, 14-0.

Also... Incase you forgot... Carson Wentz is indeed a wizardhttps://t.co/WvwnqdSZkF

Wentz reaction. Looks like something out of Madden pic.twitter.com/OgfuAdzwUi

Bears get pinned back to their 1-yard line after a penalty and a fumble. Trubisky’s deep pass on 2rd-and-17 is incomplete. He just throws the ball out of bounds on third down.

Another crappy punt (looks like Steven Means may have tipped it?) from the Bears allows the Eagles to start at Chicago’s 45-yard line. Kenjon Barner did a nice job of pulling Jaylen Watkins away so that the ball didn’t touch for the Eagles to allow a potential Bears recovery.

when the football is actually a grenade… pic.twitter.com/T9E7PdduR1

Wentz hits Ertz for a first. Ertz fumbles, but recovers. Stop fumbling! Wentz gets sacked and Philly has to settle for a 45-yard field goal. Elliott makes it. Three possession game. Eagles lead, 17-0.

Joe Walker gets hurt while covering a kickoff. Slowly walks off the field. Stinger. With Dannell Ellerbe inactive, Philly is down to Najee Goode at middle linebacker in base defense. Eagles force a three-and-out anyway.

Brent Celek gets called for holding on a first down. No matter. Blount breaks off a big run where he HURDLES a dude. Wentz throws to Celek and the veteran player drops it. Wentz airs it out deep to an open Agholor but the pass is just a little too far out of the receiver’s reach. Agholor and Kyle Fuller got tangled up a bit, so that didn’t help matters. Agholor makes a catch on third down to put the Eagles at 4th-and-1. Pederson challenges that Agholor’s forward progress put him beyond the marker. The challenge is unsuccessful. Eagles go for it ... and Wentz’s sneak moves the chains. He’s still perfect on those plays. A few runs from Corey Clement and a defensive holding penalty drawn by Torrey Smith put Philly at Chicago’s 21-yard line. Eagles get to the 8-yard line with 12 seconds remaining in the half. Then nine seconds. Then Wentz throws to Jeffery in the end zone for a touchdown! Great celebration: Jeffery bowls a strike with his teammates as the pins. Eagles lead, 24-0.

Come for the Alshon TD...https://t.co/pYuwKrRW3s

Stay for the bowling pins #FlyEaglesFlyhttps://t.co/jGA9G5kjim

Tarik Cohen picks up a good gain on the first kickoff of the second half. Trubisky completes a pass for a Bears first down. GASP! Their first one of the game ... with 14:00 left in the third quarter. Brandon Graham strip sacks Trubisky but Chicago recovers. Career high seven sacks for BG. Trubisky throws for another first on 3rd-and-14. C’mon, D. Bears try to get tricky on a double reverse and Cohen gets tackled for a big loss by Vinny Curry. Chicago ends up settling for a field goal. The shutout is ruined. Derek Barnett was close to blocking the kick. No cigar. Eagles lead, 24-3.

Wentz throws a screen to Ajayi on 3rd-and-5 to pick up a first. Then he throws to a wide open Clement for another. Ajayi false start puts the Eagles at 2nd-and-13. Torrey Smith makes a 5-yard. Then HE commits a false start. Between this and the offside penalties on Chicago’s previous drive, this is too sloppy. Smith makes another catch to put the Eagles at 4th-and-1 but immediately takes a big hit and has to leave the field. Ouch. Another Wentz sneak moves the chains. Agholor drops a pass on 3rd-and-6. Pederson decides to go for it on Chicago’s 35-yard line. Wentz’s pass on a rollout goes right through a defender’s hands and falls incomplete. Turnover on downs. Would’ve been hard to kick the 50-plus yard field goal into the wind there.

Bears have nothing going. Three-and-out. Barner picks up a 17-yard return on the 58-yard punt.

Torrey Smith back out on the field after leaving on the previous drive. Good to see he’s OK. Wentz’s second down pass for Jeffery goes high but looks catchable. Alshon didn’t make the play. Tipped ball had the potential to be picked but wasn’t. Ertz picks up a big gain on a reception over the middle to end the third quarter. Lots of YAC for Zach.

At this point, FOX switched away from the Eagles game for many people. The Eagles are so good that this keeps happening.

Ajayi breaks off a big run and is about to score a touchdown ... and then he fumbles. But it doesn’t matter! Agholor picks up the ball in the end zone for the score. Shame for the Jay Train because that was a good run. At least Nelly had his back. Eagles lead, 31 to 3.

Just how they drew it up!

Jay Ajayi with great run, fumbles it off to Nelson Agholor...#Eagles 30 #Bears 3https://t.co/yyr310dsNC

Eagles still have Wentz in the game with a 28-point lead and 12:29 to play. Chance Warmack comes in for Stefen Wisniewski, though. Mack Hollins also in for Torrey Smith. Wentz sails a pass really high for an open Ertz in the middle of the field on third down. Donnie Jones time.

Bears gain a couple first downs before turning the ball over on downs.

Nick Foles enters the game with 9:38 remaining. Wisniewski in at center for Jason Kelce. Isaac Seumalo in at right tackle with Lane Johnson resting. Warmack still at left guard. Eagles pound the rock with Blount in an effort to kill clock. They also let Foles throw a few passes to move the chains. One of his throws goes to Ertz to give the tight end 100 yards on the day. He’s the first Eagles player to go over the century mark in receiving yards this season. Crazy, huh? The Eagles’ drive ends when Blount fumbles again. Too sloppy.

The Bears move into scoring position in garbage time. Trubisky gets picked off by Rasul Douglas. Then the Eagles defensive backs do the electric side.

But the play is overturned upon review. Boo. But then Douglas tips Trubisky’s pass and Corey Graham returns it to Chicago’s 19-yard line! Nice.

Eagles-Bears Final Score: Observations from Philadelphia’s win over Chicago, 31 to 3