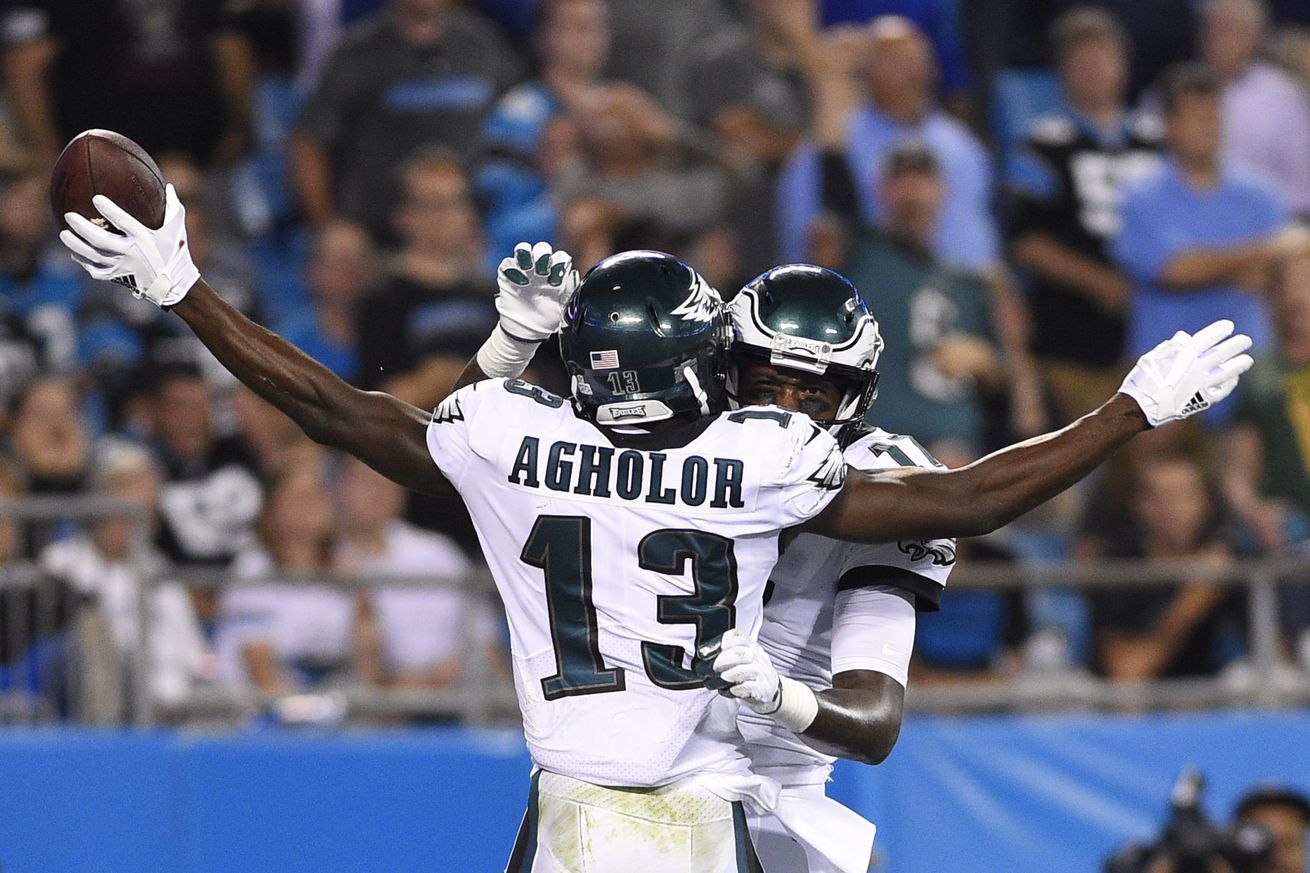 A breakdown of one of the Eagles’ best red zone plays.

Waiting through the Eagles’ bye week was a bummer. To help ease the absence of our favorite 8-1, Super Bowl-bound team, I’ve decided to compile a mini-series that focuses on plays the Eagles run with frequency out of different formations with different personnel and how they’re successful. You can find the previous installations of this series here.

Today I’ll be breaking down the Double China concept — I’ll refer to it as DC. This is typically a play that is ran in the red zone, and like the others that I’ve covered throughout the week, it’s not exclusive to the Eagles. This is a Route concept that works against single-high safety coverage and split safety coverage because of how each route draws a reaction. 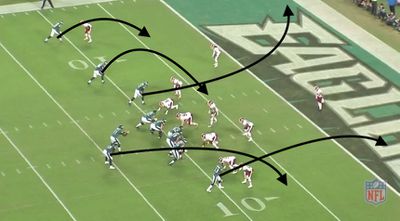 Here the Eagles run DC with the Redskins playing a single-high safety. Wentz releases this one late and high instead of before Alshon Jeffery breaks into his route, allowing him him to catch the ball as he’s turning. The pass was incomplete, but you can see the opportunity and mismatches the route concept creates. 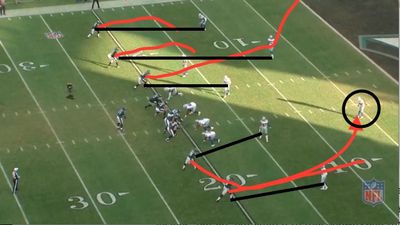 In the play above, the route that each receiver is running is defined by the red line. This play comes from the Eagles’ Week 17 victory over the Cowboys at the conclusion of the 2016 season. The Eagles come out in empty, which means there is nobody in the backfield besides the quarterback. What this does is spread the defense out and help identify the coverage. Carson Wentz does a good job pre-snap of getting the Cowboys to show the slot blitz, allowing him to adjust accordingly. Zach Ertz who is in the near slot on the left side runs the corner route against man coverage. Because the defensive back across from him is blitzing, it becomes the linebacker’s responsibility to pick Ertz up. Unfortunately for the linebacker, he has inside leverage against a route that is designed to attack the outside. As I mentioned when I covered the slot-fade concept, it’s hard for a safety to come across and and cover the boundary because the field is condensed. In this situation, the safety who is supposed to play the deep middle can’t get over in time the get over the top of Ertz’s route.

Much like the route combinations and plays I’ve detailed throughout this series, Pederson does a good job of building in back-side reads that can be exploited if a defense takes away the primary read. In the backside the Eagles are running a switch concept which has two receivers switch inside and outside positions as their routes develop. The slot receiver on the right side runs a wheel route which starts horizontally then explodes upfield while the boundary receiver runs a post. This route combination can create a pick play against man coverage and even cause confusion that leads to busted coverage against zone coverages. 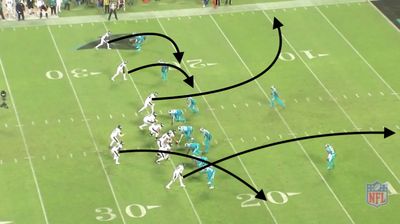 Although DC is a play that’s most effective and mostly seen in the red zone, it can be used on the outside edge of scoring territory. Here the Eagles run it at the Carolina Panthers’ 25 yard line. The Panthers show blitz pre-snap which means man coverage if they stick with it. The Panthers do, and the coverage becomes cover 1, with a single high safety and tight end Zach Ertz matched up on the other safety. Ertz — who had already scored two touchdowns in this game — was a focal point for the Panthers’ defense. As he breaks to the corner, the deep safety rotates over that way, anticipating Ertz will get the ball. Because of the blitz and man coverage, the middle of the field is vacated, and Carson Wentz notices this. Wentz then hits Nelson Agholor on the shallow crossing route who has a free run to the end zone because of the emphasis on stopping Ertz and the route combination that cleared everything out.

Again, Pederson has a built in go route backside that gives wide receiver Alshon Jeffery a one-on-one matchup if Wentz wants to go back to that side of the field.

I hope I was able to shed a little light on how the Eagles utilize scheme and personnel to get looks that they like. Now that the bye week is complete, this will conclude the “Staples” mini-series for now. If you’re just checking in, you can find the other four installations of this series here, along with all of the other great film room pieces we’ve compiled here at BGN. If you’ve enjoyed this series, make sure to checkout and follow me on Twitter at @TjackRH where I post clips, videos and analysis weekly. Until next time, Fly Eagles Fly!

This post first appeared on Bleeding Green Nation, A Philadelphia Eagles Commu, please read the originial post: here
People also like
Free NBA Predictions - Expert Basketball Predictions Today - February 1st, 2023
How To Keep A Patio Cool – Beat The Heat
11 Ways Real Estate Market Will Change in Nigeria in 2023
How to Choose an Epoxy Floor Coating for Your Garage
Work From Home Jobs
This Is What You Should Do If You’re Laid Off
React JS, Node JS & Angular JS: Which One is The Best For Web Development?
How to bladder cancer immunotherapy
GALA DALI – THE MUSE OF THE SURREALISTS
Pet Dog Shower Head Handheld Cat Bathing Shower Tool