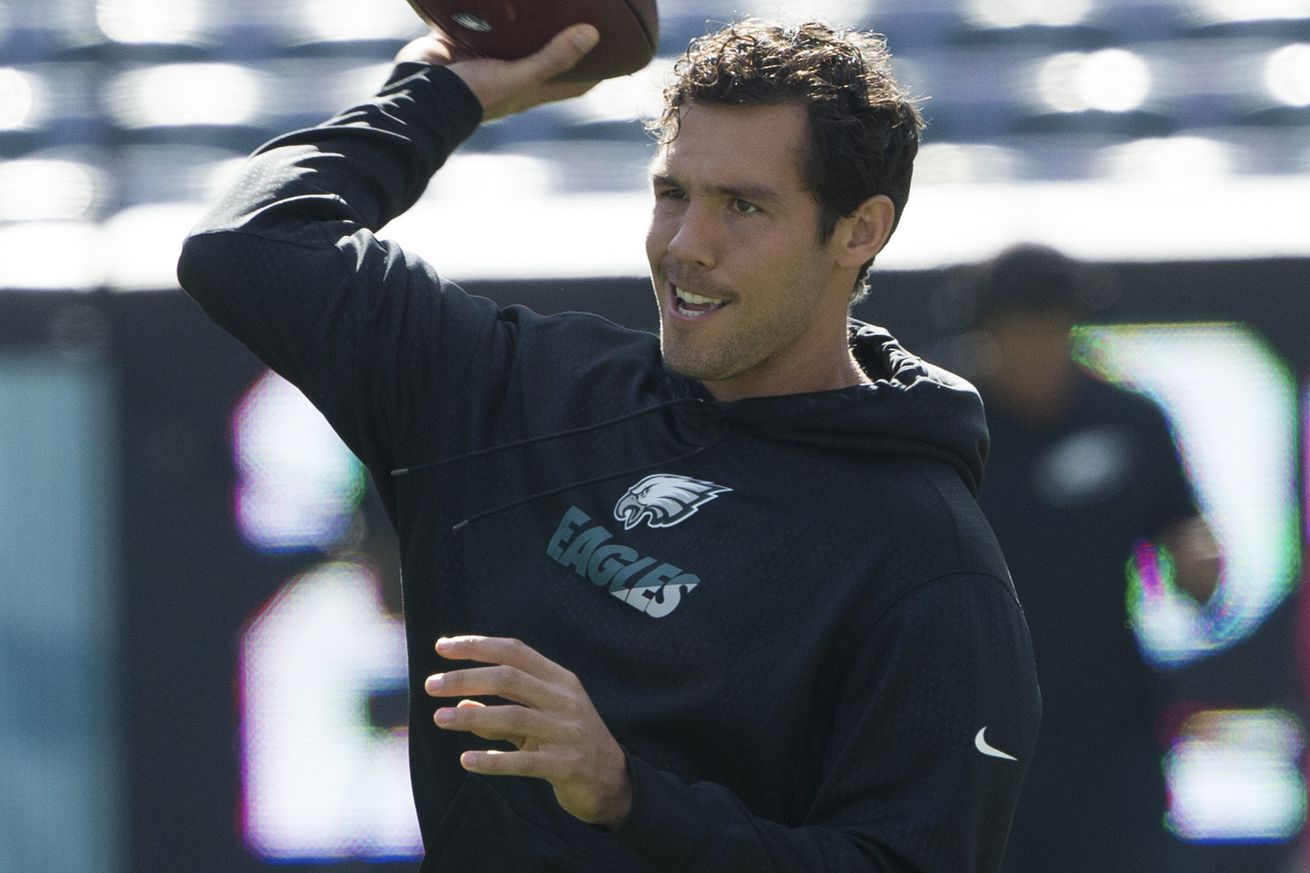 Philadelphia Eagles news and links for 2/15/16.

SI published a study that rated the attractiveness of 32 QBs in 2014. Those surveyed weren't crazy about Bradford: pic.twitter.com/5Po6Y4scZ8

Eagles should stay away from free agent wide receivers - PhillyVoice
In short, the pickings are extraordinary slim. In 2015, the wide receiver market was similarly weak. The most attractive option was former Eagles receiver Jeremy Maclin, who received a five-year, $55 million deal from Kansas City. While Maclin's absence was felt hard by the Eagles, and his presence in KC boosted a Chiefs offense that got zero touchdowns from their receivers the previous year, Maclin's numbers actually dipped from 2014 to 2015.

Fan-Demonium: Can Eagles Develop A QB? - PE.com
Quarterback is the most important position in all of sports. Franchises live or die with their quarterback situation. We saw a great example with the Cowboys this season. When Tony Romo was healthy, Dallas got off to a 2-0 start. They went 2-12 the rest of the year, and one of those wins came in a game he started after coming back at midseason. Romo was 3-1 as a starter. The other quarterbacks went 1-11. It's incredible that one player made such a drastic difference. That's the importance of a good quarterback. The Eagles are unsettled at quarterback right now. Sam Bradford is a free agent. The Eagles could use the franchise tag to secure his services for 2016. They could try to sign him to a long-term deal. They could let him walk and concentrate on finding a quarterback in the draft. No matter what they do, the Eagles need better quarterback play going forward.

Eagles Draft Talk - Iggles Blitz
We’re all pretty sure the Eagles will take a QB at some point in the upcoming draft. What is Doug Pederson going to be looking for in a QB? We don’t know anything definitively, but we do have a few hints. Pederson has talked about how he values the QB being able to make adjustments while at the line of scrimmage. That worked very well for the Chiefs this past season so I’m sure that is something he really wants. No rookie QB is ready to make a lot of adjustments, but some do that better than others.

Eagles' salary cap still in good shape after new contracts - ESPN
The Philadelphia Eagles' recent spending spree -- which resulted in new contracts for Lane Johnson, Zach Ertz, Vinny Curry and Brent Celek -- has not exhausted the team’s salary cap flexibility. That’s the good news. Depending on exactly where the 2016 salary cap lands, the Eagles should have somewhere between $20 and $30 million of space. By cutting a few high-priced veterans -- Jason Peters ($6.2 million cap savings), Mark Sanchez ($3.5 million) and DeMeco Ryans ($3.5 million), for example -- the Eagles could create another $10 to $13 million in space. With $35 to $40 million in space, the Eagles would be in the top 10 of teams with the most space in the NFL.

Examining the offensive side of Eagles roster - The Intelligencer
It has become clear now that the foundation of the Eagles going forward has its roots in the draft classes of 2012 and 2013. Two of the team’s top three picks from 2012 are now signed long-term. That would be linebacker Mychal Kendricks and defensive end Vinny Curry, both of whom were second-round picks that year. It seems like just a matter of time before the top pick in ’12, Fletcher Cox, is also signed for the next half-dozen years or so.

Joe D'Orazio glad to be back on Eagles' staff - Daily News
AT 27, JOE D'ORAZIO is mature beyond his years. He's already coached alongside Andy Reid here and in Kansas City, been part of former Penn coach Al Bagnoli's staff at Columbia. He's already parlayed his experience as the center on Penn's successful football program of the late last decade and lifelong passion for the game into a diverse coaching portfolio that includes working with receivers and tight ends, special teams, defense and now, as Eagles coach Doug Pederson's offensive quality control and assistant wide receivers coach.

Eagles Stay or Go Part 6: Jordan Hicks to Donnie Jones - CSN Philly
We just keep waiting for Huff to blossom and two years into his career it just hasn’t happened. Huff has surpassed 30 receiving yards in just four career games and has just 410 receiving yards and three touchdowns to show for his first two seasons. Way too low for a third-round pick. Normally, I would cut a third-round pick who has underachieved like this, but I want to see Huff with a new staff and a new coach. I was never a Bob Bicknell fan, and I want to see what Huff can do with Greg Lewis coaching him. You can tell Huff has the tools. Can the Eagles get anything out of him? This is his last chance.

Bills’ pairing of Rex Ryan, Jim Schwartz never stood a chance - Buffalo News
Keith Bulluck played linebacker for the Tennessee Titans for most of Schwartz’s 10 seasons as an assistant coach with the team. He loved Schwartz’s coaching style because it allowed for players to have input based on what they were seeing during the game. Most of all, Bulluck appreciated the simplicity of Schwartz’s scheming, something he presumes the Bills’ players sorely missed after the coaching change. "When those guys were up there in Buffalo complaining, I just felt, ‘Maybe that new coach has got them thinking too much,’ " Bulluck said. "D-linemen don’t want to think. If you’ve got them doing too much thinking, they can’t get off the ball."

Bob Sturm's mailbag: Are Cowboys NFL's rehab center? Is Witten's understudy in the draft? - Dallas News
Honestly?  I am not about to say for even a moment that this is out of play if the Eagles were to make him available.  I don't see that they would because the cap hit on year 2 of his deal is such that his cap hit of $8m in 2016 would jump up to $13m if they cut him.  That would be pretty insane to do that.  So, they could try to trade him, but they are not getting anyone to take a deal with that much guaranteed money left on it. Now, from a Cowboys standpoint, there are definitely very key members inside the organization that never wanted to let him go and would campaign hard for his return if he was on the street.  But, the time for that would be next season - not this year.  At which point, most of us who were concerned about his odometer would believe that the best of DeMarco Murray has already been spent.

Matt Forte faces the daunting task of convincing teams running backs can produce after 30 - SB Nation
When a running back turns 30, NFL teams are usually convinced that the end is near.