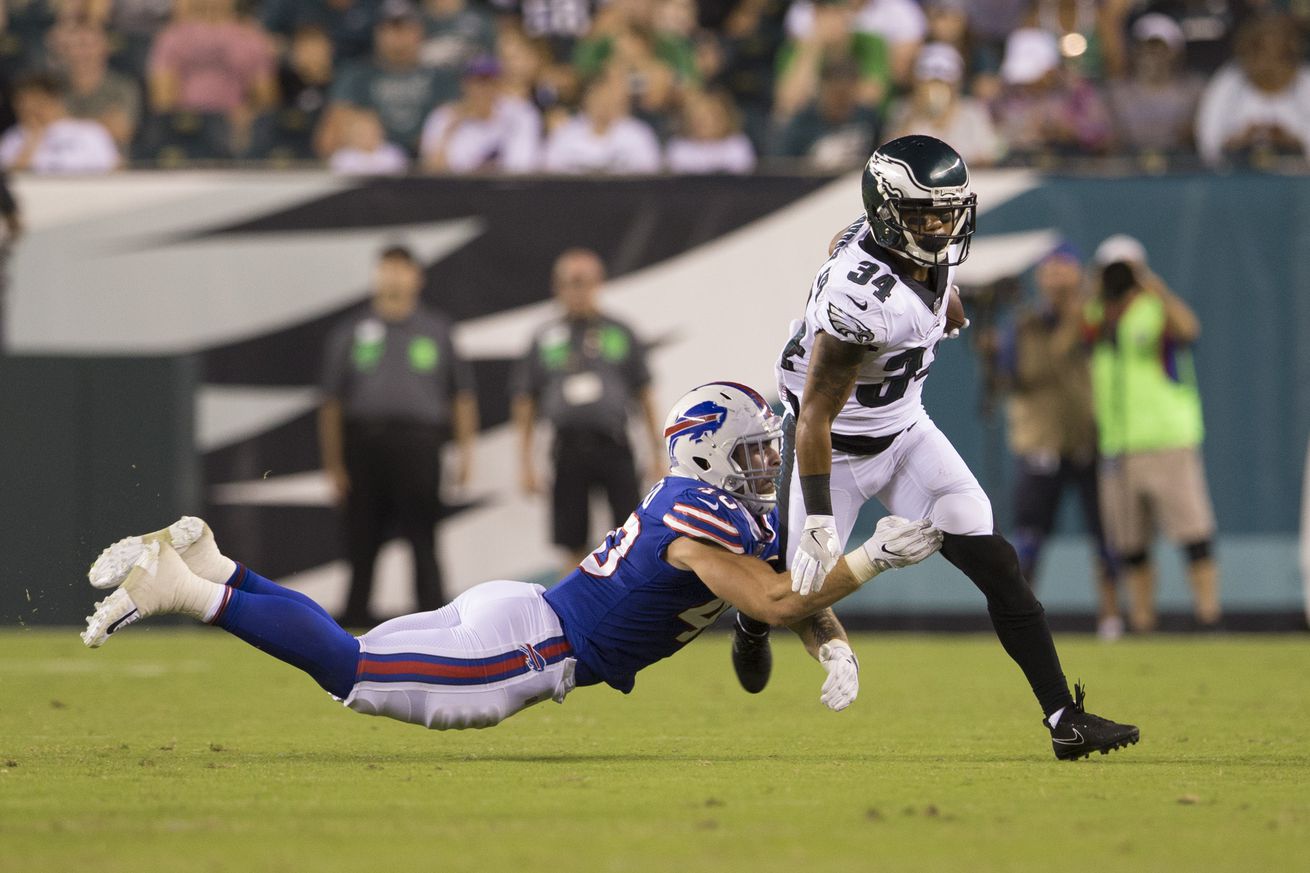 Would it really be Preseason if we weren’t already condemning rookies?

I understand: the preseason is for disproportionate reactions.

Always has been; always will be, too. All of our football energies have been pent up since the mid-May breakdowns of rookie classes and free agent acquisitions. Bold predictions have flown across message boards, timelines, and local bars. The smallest success blossoms into adamantine validation; the teeniest of failures can only bear ill tidings for the future.

Again, there’s not much we can do about that. It’s our instinct because it’s our passion. But, inevitably, the brakes of our madness must be tapped. Whether it happens when our lofty expectations for a second-stringer come crashing to regular season reality; when the 53-man roster comes through, untouched by conclusions fans assumed to be unassailable from their couches; when Week 1 starters, game plans, and personnel packages compare nothing to those of the preseason.

This is my effort to tap the brakes on the questioning of DJ Pumphrey, and his place on the 53-man roster.

Pumphrey the Runner: By the Numbers

Statistically, Pumphrey has looked simply dreadful. From a rushing perspective, he has touted the ball 7 times for a whopping 2 yards.

However—and this isn’t so much good news for Pumphrey as it is bad news for, um, everybody—nobody is doing much better.

Sure, you may look at Clement’s jaw-dropping 3.1 yards per carry with rose-colored glasses, but remove his 24 yard scamper against Buffalo—a run which Buffalo bungled more than Clement created—and the Wisconsin UDFA is averaging 1.6 yards per attempt. Blount, who has averaged at least 3.9 yards per carry in every season since 2013, has seen that number halved in two games with Philly. Byron Marshall’s sitting pretty at 3.9 yards per carry—but all seven of his attempts have come in 4th quarter preseason play. Forgive me if I’m not leading the hype train just yet.

As I said, this in no way erases Pumphrey’s poor numbers. It does, however, provide context. If, of the four that have seen the field, only one back isn’t producing, then that one RB is likely the issue; but if all four aren’t producing, the issue is likely elsewhere.

And that’s where we turn to the film.

Pumphrey the Runner: A Film Review

Let’s start with a simple play. On 3rd down and 3, the Eagles flex out a Double Stack look reminiscent of the Chip Kelly years. GB responds with man coverage on the boundary and a single high safety that isn’t pictured until the end of the play. The strong safety, Defender #6, creeps down into the box, to give GB a defender for each hole generated by the 5 blockers of the Eagles offensive line.

This alignment favors the pass, but McGloin either can’t or doesn’t audible. Pumphrey reads the hat-on-hat blocks of the five linemen, locating the correct hole. However, GB’s strong safety does an excellent job remaining patient, mirroring Pumphrey, and filling the gap. Pump does well to spin and fall forward, but he lands about half a yard short of the marker.

Drink it in. That’s the last time you’re gonna see it.

Later in the 2nd, Green Bay throws a strongside blitz Philly’s way. The Eagles are looking to trap #96, the left defensive tackle, and pull the RG to seal the backside, from where the blitz comes. On the chalkboard, this works to Philadelphia’s favor. If the TE can seal the SAM backer, the pulling RG will pick up the nickel defender, and Pump can follow the LG cleanly into the second level.

Exactly none of that happens.

The SAM backer slips Billy Brown, UDFA TE out of Shepherd, and easily knifes into the backfield through the C gap. RG Josh Andrews climbs to the LB, which was his pre-snap assignment, but lets the blitzing S fly right by him in the process. C Stefen Wisniewski cannot displace the defensive tackle, and Pumphrey is left with nowhere to go to the left, to the right, or downhill. No gain.

Here’s another play with the potential to go far, but further interior offensive line issues stop that train dead in its tracks. A kick out block from the TE (Brown #85), and a play action reverse look from the WR, sucks in the linebackers, who overpursue over the top. The C (Wisniewski #61) peels off his double to seal off the linebackers. The only thing left is the reach block, to be executed by the LG...

Both DTs end up closing the gap once Wisniewski climbs to the second level. If Warmack can land that reach block, Pumphrey has a full head of steam into the third level of Buffalo’s defense, with only the secondary to shake.

Schematically, this is such a pretty play. Pumphrey hits the exact hole he should, and he has no reason to believe he’ll be dropped for a loss. The DT disengages the moment Pump commits, and there’s nothing to be done. DL beats OL, and Pumphrey’s stats suffer once again.

Buffalo’s defensive line terrorized Philadelphia’s offensive line for 60 minutes—whether Pumphrey was the back or not. But because we’re defending Pumphrey, let’s watch him get pummeled by a defensive tackle once again.

Here we find another example of Wisniewski’s harrowing lack of power in the run game. Guards Dallas Thomas and Chance Warmack do well to climb and tag LBs on this outside zone run, while Billy Brown struggles to find the outside shoulder of the SAM and seal off the edge. Due to Brown’s struggles, Pump may not have found much daylight on this play, but it’s the penetration of the playside 1-tech that destroys this play. #37, the safety, stays disciplined and remains present in the cutback lane, which discourages Pumphrey from changing direction.

That being said, this isn’t a perfect play by Pump. I would have liked to see him read the penetration earlier and cut back immediately. He has the reactionary quickness to make that closing safety miss, and thereby create some yardage. That being said, Pumphrey has always been an industrious runner, who often foregoes the risky cutback for safer, hard-nosed yardage—and his game is far better suited for power running schemes than zone. All possibilities considered, you can’t hold a 300 lb defensive lineman, 2 yards in the backfield at the moment he gets the football, against him.

No matter how many times it happens.

Gosh, that’s just so ugly. I don’t know what to tell you. Someone between C Stefen Wisniewski and LG Chance Warmack had no idea what they were doing. Blech.

We should take a moment to put this in a wider perspective. There isn’t a running back on Philadelphia’s roster who produced passable numbers with this line—far more concerning, there isn’t a back in this league who could. That is to say, the offensive line performance over the first two weeks of the preseason has been, frankly, booty cheeks. From 1st to 3rd team OL, the running backs are averaging less than 2.5 yards per carry. Wentz put far too much mileage on his arm last season, and if Philadelphia can’t generate a running game in the regular season, he’ll be called upon to crest 600 passing attempts again. If there’s a preseason storyline to which we should overreact, it’s not just Pumphrey’s performance—it’s that of the running game as a whole.

To conclude our defense of Pumphrey’s production in the preseason, it is warranted to look towards his work in the passing game. Immediately following the drafting of Donnel Pumphrey in the 4th round, the coaching staff made it clear they expected him to work heavily as a receiver out of the backfield and in the slot.

His alignment and routes have been, to this point, white bread. You have to imagine Coach Pederson and offensive coordinator Frank Reich are holding back the truly creative manners by which they intend to deploy Pumphrey (and Sproles, who hasn’t yet seen the preseason field).

This is another play that looks great pre-snap. The Cover 2 shell initially presented by GB bodes well for the weakside screen Philly intends to pull.

However, just before the snap, 2nd-round selection Josh Jones from NC State rolls down as a third linebacker, and GB shifts their coverage to a Cover 0 match zone concept. Two defenders meet Pumphrey, who only has one blocker, as he leaks out for the screen. Jones does a nice job forcing Pumphrey (who stops on a dime) back into the strength of the defense, and it’s a one yard gain.

Another Pumphrey pass play falls victim to match coverage on this 2nd down. Rookie Kevin King, a 2nd-round corner from Washington, plays with his eyes through Pumphrey and into the backfield. As soon as he sees Pumphrey break out, he releases his WR, to be covered by the deep safety and the nickel back who was previously on Pumphrey. He can now click and close on Pumphrey and deliver a shot.

“Hey, look! Pumphrey didn’t break from a big hit!” a voice in the distance calls out.

Anyway, this is a pretty crummy read by McGloin, who should really look to hit Hollins on the back shoulder fade, or else move through his progressions.

I show these reps to, again, tap the brakes on preseason hysteria. Pumphrey will make this roster. He was a fourth-round selection only four months ago, has very exciting traits, did good things in camp, and isn’t threatened by the players behind him on the depth chart (sorry, Clement truthers).

We haven’t yet scratched the surface of the potential of DJ Pumphrey. Between the tackles runs, coupled with the occasional speed out or swing pass, paint a plain and incomplete picture of his skill set and potential usage. Poor offensive line play and excellent defensive work mask his true ability.

Take a deep breath and circle Sunday, September 10th on your calendars, my friends. Regular season football, not unlike winter, is coming.

This post first appeared on Bleeding Green Nation, A Philadelphia Eagles Commu, please read the originial post: here
People also like
Best Home Sauna To Stay Warm All Winter
How To Make A DIY Nature Mandala Craft
A Different Script – Preparing for Legal Issues in Life and Medicine
Learn How To Save Money And Time When Tracking Your Trailers
How To Get Rid of Ticks in the Yard – 8 Steps
“The Friend Who May Not Seem a Friend” – The Cat and the Fire, Post 2 of 3
طريقة زراعة قصب السكر
Why Do I Have These Thoughts?
How Do I Care For Hydrangea Flower?