Carson Wentz & The Art of Getting Back Up (Part I) 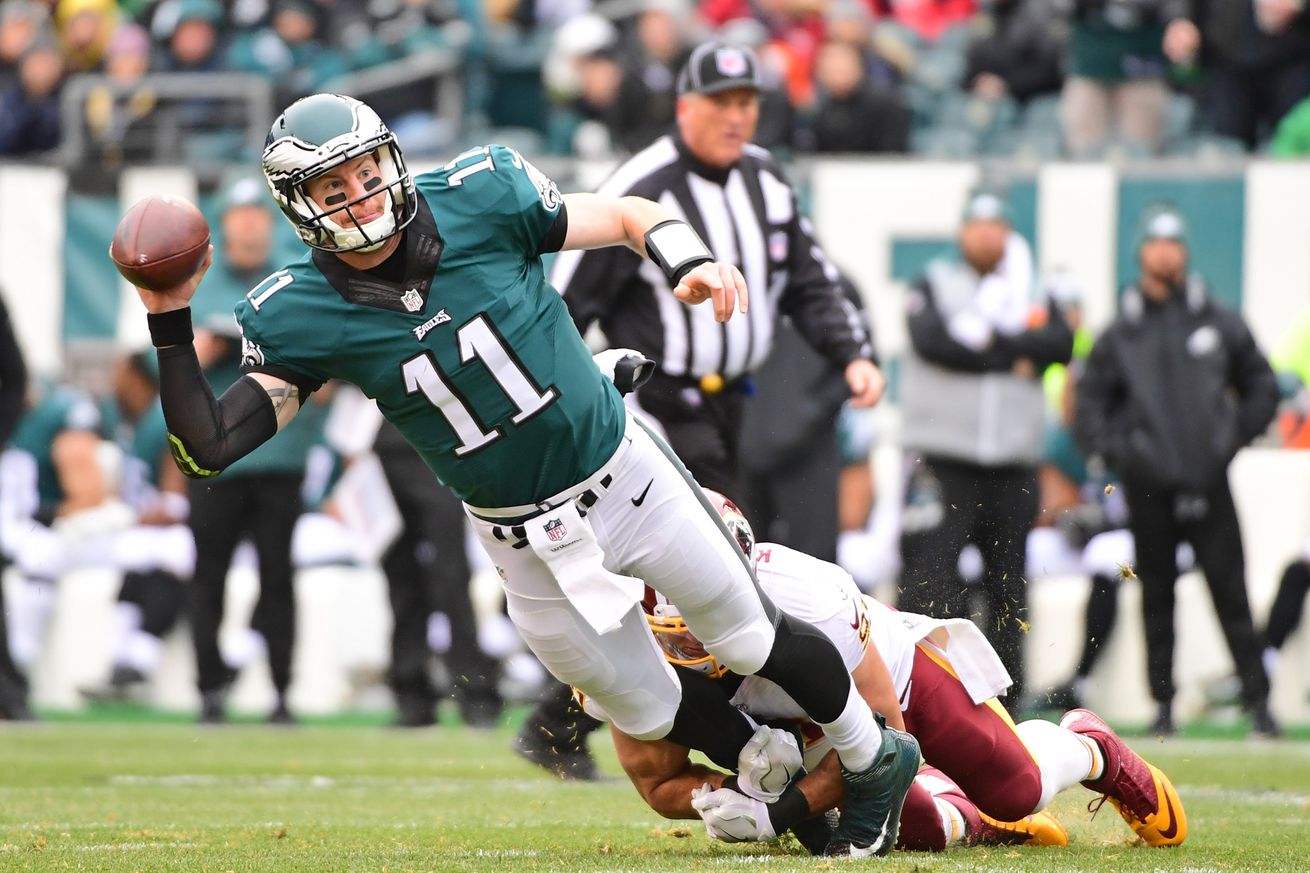 There was a theme to Wentz’s Rookie season. And it wasn't a bad one.

The most famous statue in the city of Philadelphia, sitting at the bottom of the Art Museum steps, is of a fighter who didn’t even really exist.

Playing Blackjack From Home Guide
Netflix’s Young Wallander Review: A C…
Venteskraft Platinum Membership Provi…
Losing Steam as an RN: How to Get out…
Classic Blade Runner Adventure Game B…

On its face, it sounds a little silly. So why then is this statue so meaningful to Philadelphia?

The statue, and the fictional character it resembles, represent something that Philadelphia residents identify with. Something that is woven into the fabric of every fan in the city. Something that grows stronger every year that goes by without a playoff appearance of championship from one of its four favorite teams.

The statue symbolizes the idea of taking a punch and then picking yourself back up off the mat. Something Rocky Balboa did in every one of his movies and something that Philadelphia fans do at the start of every new season. Now, it also symbolizes one of the themes of quarterback Carson Wentz’s rookie season.

There is a popular narrative that suggests that, after Week 3 of the 2016 season, Wentz had a poor rookie season. The narrative has been so pervasive that it is widely accepted as fact. Fortunately for the Philadelphia Eagles and their fans, that fact lies more in the alternative category.

In the first three weeks of the season, Wentz was near perfect and the world took notice. Even the Vice President of the United States was publicly hopped aboard the Wentz wagon. The hype, as hype almost always does in the social media age, got out of hand. At that point, how can there be anything BUT regression for a rookie quarterback? And Wentz did regress. On that, there is no debate. From a statistical standpoint, there was surely regression. Further, Wentz regressed mechanically which later led to accuracy issues as well. And as Wentz regressed, so did the team around him. At times, it was downright ugly. Then, just like the hype got out of control in the first three weeks, so too did the criticism. It wasn’t all bad though.

As I mentioned above, there was an overall theme to Wentz’s rookie season that might have been missed by those who were too busy focusing on the negatives. The theme was Wentz continually picking himself back up when things went wrong and making things happen. He did this both on a micro level within games and a macro level throughout the season. When football season ends, fans and analysts alike tend to focus too heavily on the big picture and forget about how the individual games actually played out. So let’s go through some of the games from Week 4 and later and assess how things actually played out.

This game is always remembered as the game where Wentz was off target downfield to Agholor on the game-ending interception. As it turns out, there was actually an entire game played before that play. The Lions storm out of the gates and take an early 14-point lead with the Eagles defense looking lost coming off of their bye week. Wentz, being as cool, calm and collective as he was to start the season, responds and leads the team downfield for a touchdown only to be then matched by another Detroit touchdown. Wentz then responds again and drives the team downfield for a first half ending field goal on a 13-play drive that also included three 10-plus yard penalties called against the Eagles.

In the second half, the defense finally gets its act together and Wentz and the offense, on the road against a boisterous crowd, churn out 13 more points to give the Eagles a lead with six minutes remaining. We all know how the game progressed from there. Thanks Ryan Mathews. Contrary to the narrative, Wentz actually played great in this game. Did he make mistakes? Yes. But he also did what every fan in the country wants to see their quarterback do. In a game filled with mishaps, 700 penalties and poor defensive play, he overcame it again and again. He elevated the team and gave them a chance to win the game.

There isn’t too much to be said about this game. A tough game on the road in hostile territory versus a division rival. With the defense’s inability to get off the field coupled with a Malcolm Jenkins’ interception return and a Wendell Smallwood kickoff return for touchdowns, Wentz and the offense weren’t on the field hardly at all in the first half and literally not at all in the second quarter. In the game that most fans say never felt close, the Eagles somehow got within a touchdown of winning. Wentz was on the sideline for almost the entire 1st half, the defense couldn’t get off the field all game and his fellow rookie right tackle was getting abused. Finally, Wentz found a way to create magic on his own and pulled off a Russell Wilson-esque miracle late in the game. Then it got called back on a questionable penalty on Smallwood. Watching this play is still so disappointing.

The world was against Wentz that day, which happens sometimes to every quarterback, yet the Eagles only lost by a touchdown. The overall game may have been ugly but the same cannot be said about the Wentz’s performance.

I grouped these two games together because, in a way, they were very similar. In both games, Wentz started out awful. He threw terrible interceptions that put his team down and in bad positions early. Many rookie quarterbacks, or veterans for that matter, would cave in situations like this. In both games, though, Wentz battled back. It wasn’t necessarily pretty, he still made mistakes as each game progressed but he didn’t let his huge mistakes early on defeat him.

In a defensive battle with the Vikings, with the game still within Minnesota’s reach, Wentz overcame his demons and led the team on an 11-play, late 3rd quarter touchdown drive that essentially put the game out of reach for the Vikings. In week nine, after gifting the Giants 14 points in a raucous environment like New York, Wentz again battles back and leads his team on five different scoring drives to get within five points and one throw from winning the game. Now, that final incompletion on the slot fade route to Jordan Matthews is one that Wentz needs to complete. Keep in mind, however, this game also included two failed fourth down attempts in scoring territory and a blocked field goal by the Giants. In addition, this entire game was essentially a furious comeback effort for Wentz and the Eagles. This allowed one of the league’s most creative and aggressive defensive coordinators, Steve Spagnuolo, to really let it loose. Again, just like the Minnesota game, things go poorly early on, this time it was mostly because of Wentz, yet he battles back and gives his team a chance to win the game.

One of these games was a horrendously disappointing loss, the other was a beautifully executed team win. For the Eagles rookie quarterback, however, these games were very similar. In both games, the Eagles defense and running game was, for the most part, very effective. Wentz wasn’t asked to be a superhero in these two games but he minimized mistakes and executed his responsibilities and probably should have won both games. If you think about it, these two games for Wentz were very similar to the entire season for fellow standout rookie Dak Prescott. And that is not a shot at Prescott, who I think deserves much more credit than he is typically given. I use that example just to illustrate how these two games played out for Wentz.

If we include weeks one through three, this brings us through the first nine games of Wentz’s rookie season. In three of those games Wentz performed near flawlessly (Weeks 1-3) and in two others, (weeks 8 and 10) he was put in a good position by the defense and running game and did exactly what was asked of him. In two others (weeks 5 and 6), Wentz was put in a terrible position by his defense but still managed to perform at a high level and giving the team a chance to win. Through the first nine games, there were only two games where Wentz really put his team in a poor position (weeks 7 & 9). Even in these games, however, he was able to pick himself up off the mat and make the necessary plays down the stretch to win one of the games and get his team within one play of winning the other. For purposes of being conservative, we can call these poor performances by Wentz, yet there were still positives to take away from them. By my count, that leaves seven solid-to-very good games by the rookie at the midway point.

But I thought that Wentz only played good in the first three weeks of the season?

Well, we’ve only gone through the first half of the season and that narrative has already proven to be fake news. Stay tuned for part two of this article where we will break down the remainder of the 2016 season and spread more truth about the rookie’s opening campaign.

Carson Wentz & The Art of Getting Back Up (Part I)