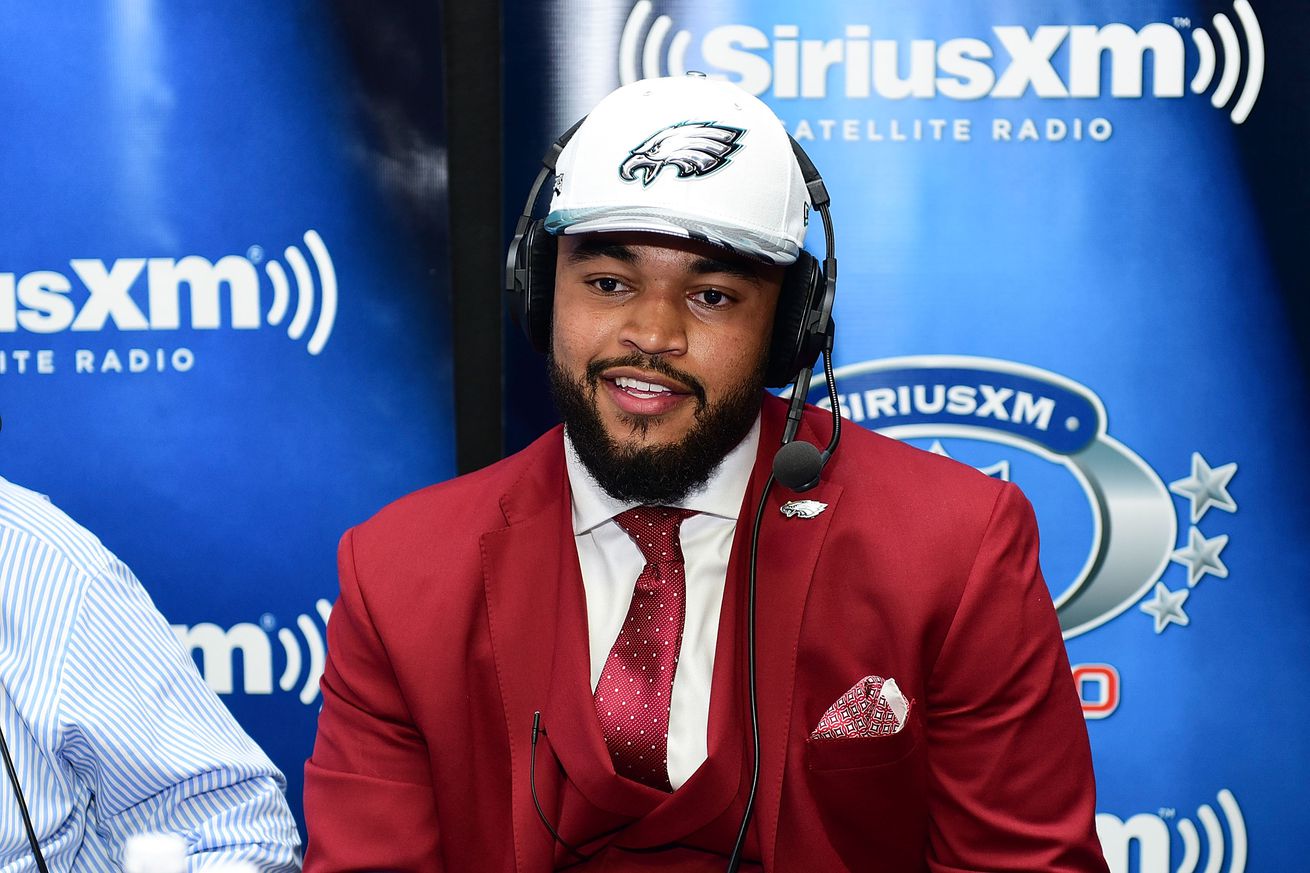 Jim Schwartz spoke to reporters on Tuesday for the first time in five months. The Philadelphia Eagles defensive coordinator touched on a number of topics, but it’s clear one particular subject had Schwartz lighting up with excitement: Eagles first round pick Derek Barnett.

“Well, anytime you turn around and look at that number 92 [Reggie White mural in NovaCare Complex auditorium] back there, anytime they can break any record that that guy has, that's going to get your attention pretty quick,” said Schwartz. “[He] played right away as a true freshman at the University of Tennessee, was productive game-in and game-out. He's really tough. He's got a great center of balance. He's not on the ground very much. He's got some things to work on, like any rookie. But he was an effective player. I think that against all competition he was consistent from game to game. He's tough as can be. He's good against the run and good against pass – played right and played left. All those things led us to draft him.”

“How much he can contribute [and] how quickly he can be ready is up to him and coaches. It's our job to get him ready to be out there. But we're really excited about him. He can turn a corner and be like this high off the ground. You guys will notice that when you see him out there. He's also been giving great effort in practice. We've pointed out his effort a couple times – chasing the ball and those kinds of things. For a rookie to do that kind of stuff has been pretty impressive so far.”

It’s hardly a surprise to see the Eagles are excited about the player they drafted at No. 14 overall. But the hype is warranted. Barnett has looked pretty good through two OTA practices open to the media so far.

2017 first round pick Derek Barnett had a strong first practice. He saw some time with the starters and had some nice battles against Lane Johnson. On his first try, Barnett got around Johnson using his incredible bend and forced pressure on Wentz. Barnett also unleashed a nice spin move on Johnson. The rookie wasn’t unstoppable by any means, however. Barnett got stonewalled when he tried to put a bullrush on Lane.

The 20-year-old Barnett might not be an immediate “starter” as a rookie, but he figures to see significant playing time in 2017. Schwartz likes to rotate his defensive linemen. Here’s a look at how the defensive end snaps were split up in 2017.

This rotation is obviously bound to change in 2017. Barwin is gone. Smith is seemingly trying to force his way off the team. With just those two players gone, that’s 931 snaps to be replaced.

Curry’s playing time could increase this season despite a disappointing 2016 outing. Schwartz noted how Curry’s pressure numbers were better than his low number of sacks (2.5) indicated.

“He rushed an awful lot inside last year. It's hard to be in there when it's run situations and not first and second down. You know, when we watched film a lot of times with Vinny, and I think you guys probably saw the same thing, his pressure numbers were high, but his sack numbers were low. I've had this conversation with Vinny, so I don't feel like I'm talking out of school with this. He didn't do as good a job finishing the rush as he did starting the rush. A lot of times he would create pressure, and somebody else would come in, [DE] Brandon [Graham], or Fletch [Cox] or somebody else, and they'd sort of get the sack or the quarterback would throw the ball away. [Curry] was on the ground a little bit too much around the quarterback. He needed to be able to take that one extra step and be able to finish. How much that knee injury, particularly early in the season, I'm sure that knee injury affected him. But as the year went on, it's really hard to say.

“But we need to take his sack numbers and make them a little more in line with his pressure numbers, because he was very disruptive last year. He did some good things, but it didn't show. In 2001, I was with the Titans and I had [DE] Kevin Carter. I think Kevin Carter had two sacks and it was a lot of the same things. He had missed opportunities for sacks and he had times where he slipped and fell or the quarterback ducked underneath him. When the season was over, we were sitting there saying, ‘Geez, he had eight or 10 sacks that he had a good opportunity to make that he didn't make them.’ Good players can make that transition, Kevin Carter did, had a good career. It was sort of a one-year blip and that is the challenge for Vinny – proving last year was a one-year blip. He's been working really good. He's been working on some of the things that we identified over the offseason. And again, I say this, I could probably say it for just about everybody, but just like Jalen Mills, Vinny comes to work, and Vinny is very, very prideful, and he's very competitive. You know, I said before, our defensive line is the engine that runs our defense, and Vinny is a big part of that.”

It’ll be interesting to see how much Barnett challenges Curry for playing time. As it currently stands, the more experienced player is taking first team reps. But Barnett is mixing in and he could steal snaps away from the veteran. Contrast what Schwartz had to say about Curry (“he was on the ground a little bit too much”) versus what he had to say about Barnett (“he's not on the ground very much.”)

At worst, Barnett will likely play the 2016 Marcus Smith scenario where he sees about 20% of the team’s defensive snaps. I’d guess that limited role will probably be held by the 32-year-old Chris Long, however.

It goes without saying the Eagles’ pass rush will be crucial to their success in 2017 and moving forward. Philadelphia invested a lot of resources into their defensive line, Barnett included. Soon it’ll be time to see if it was all worth it. For now, the Eagles are optimistic.

Posted by Bleeding Green Nation: For Philadelphia Eagles Fans on Tuesday, May 30, 2017