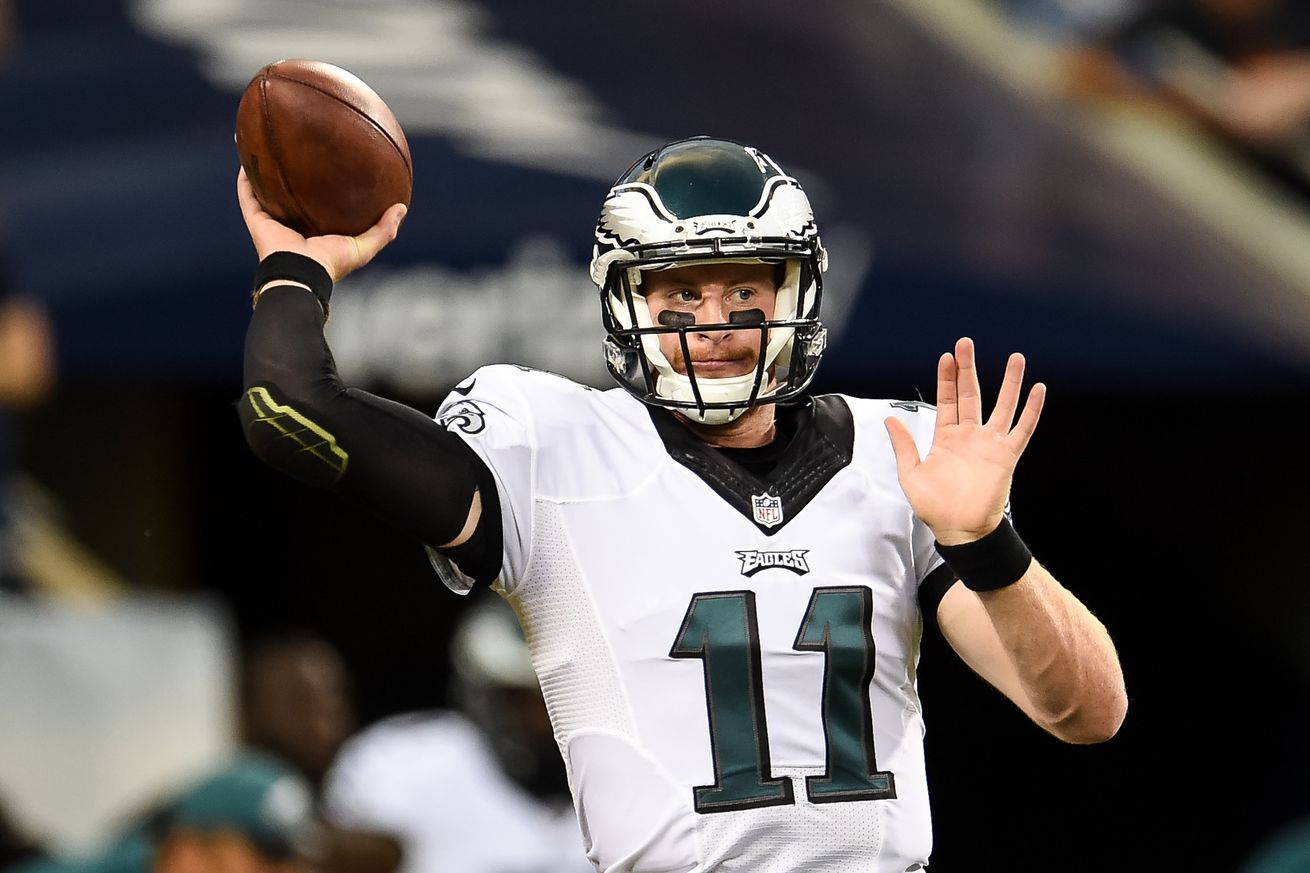 I’ve spent this week projecting the Philadelphia Eagles depth chart. I started with the Eagles' offense, moved on to the defense, and then finished up with the special teams unit. Now that the 90-man roster has been sorted, it's time for an early prediction of who will actually make the final cut down to 53.

A lot of position battles are still yet to be determined but this projection will provide us with a general sense of what the final roster should look like. We'll revisit this activity multiple times throughout the offseason. (Before we get started, here's a look at what the roster looked like at this time last year.)

Last year at this time, the plan was to keep Wentz inactive as the third string quarterback for most, if not the entirety, of the 2016 season. That obviously changed when the Eagles Traded Sam Bradford. Now Wentz is the unquestioned starter. He had some positive flashes but he needs to improve in Year 2. Philadelphia surrounding him with better offensive weapons should help in that regard. Foles is a competent backup to have behind Wentz. The former PRO BOWL MVP is more accomplished than Chase Daniel. The Eagles only kept two quarterbacks last season and I think they’ll do the same this year. That means no Matt McGloin. Sorry, Penn State fans. The Eagles might try to keep a developmental quarterback on the practice squad (Jerod Evans, maybe?).

The Eagles will employee a running back by committee yet again in 2017. Blount figures to handle the bulk of Philadelphia’s carries. Sproles will still get significant touches in what’s expected to be the final year of his playing career. Smallwood has an opportunity to earn playing time with a strong summer. He needs to prove he can stay healthy after missing significant time with injuries last year. The Eagles want Pumphrey, who weighs 176 pounds, to bulk up to the 180-185 range. He’ll get some touches but not in a full-time role like he played at San Diego State. It looked like Corey Clement had a chance to make the roster before the Eagles signed Blount. He could easily end up on the practice squad instead.

The Eagles finally have a legitimate No. 1 wide receiver again in Jeffery. He figures to be Wentz’s main target all season long. Jeffery will be motivated to put up a big season in order to get that lucrative long-term contract after this year. Smith figures to be the other starter on the outside. After a couple disappointing seasons with the 49ers, can he return to being more like the player he was with the Ravens? Matthews will start in the slot assuming he’s not traded ... which I wouldn’t rule out. Agholor has proven himself to be pretty bad but the Eagles can’t cut him due to money reasons so here he is. Hollins will be active on game day as a special teams player. He might be able to earn some offensive snaps as well. Gibson projects to be inactive on game day to start the season unless he’s contributing on special teams and/or Matthews is traded.

No surprises here. Ertz is the starter. Hopefully all that talk about having consistency at the quarterback position means something. The Eagles need him to be more productive earlier in the season. Celek is Celek. Not much of a pass catcher anymore but he blocks. Burton is a special teams ace. He played the most offensive snaps of his career last offseason. He’s a nice role player to have.

This isn’t an easy group to project. The only three locked in starters include: Peters, Brooks, and Johnson. It remains to be seen if it’s Seumalo or Wisniewski (or Barbre? or Warmack?) at left guard. It also remains to be seen if Kelce gets traded. Barbre could potentially be a starter but he’s more likely going to be a backup (or get traded). If the Eagles keep Barbre around, he could be a nice sixth offensive lineman/swing tackle to have. Or it could be Big V who steps up at the first tackle off the bench. Offensive line coach Jeff Stoutland will likely push for the Eagles to keep Warmack as he tries to rehab the former first round pick’s career. Dillon Gordon is a name to watch at this position after he made the roster last season. He’s on the bubble. Tyler Orlosky could also make the roster if Kelce gets traded.

Graham is back in Philadelphia after denying reports of holding out for a new contract. He’s poised to have another big year after leading the NFL in combined sacks, hurries, and knockdowns last year. Barnett, the Eagles’ first round pick in the 2017 NFL Draft, will have a chance to play right away. He’ll likely rotate with the likes of Curry, who is coming off a disappointing 2016 season, and the veteran Long. Jim Schwartz likes to rotate his defensive linemen so there will be lots of snaps to go around. I have Smith making the team because he actually showed competency as a reserve defensive end last year and he contributes on special teams. Means is a nice rotational pass rusher to keep around. I don’t have Alex McCalister making the team because I need to see him prove himself first.

I think the combination of Cox and Jernigan could really eat this year. I love Bennie Logan more than most, but let’s face it: he wasn’t the best pass rusher. Jernigan has 7.5 more sacks than Logan in 16 less games played. Cox and Jernigan could potentially cause havoc for opposing interior offensive lines. Jernigan will be motivated to have a big season since he’ll be a free agent after the year. The depth at this position isn’t so great, especially with Beau Allen injured (more on him later). Vaeao made the team as an UDFA last year but didn’t particularly stand out in a positive way. Qualls could push for playing time over him with a strong summer. Qualls could also moonlight as the Eagles’ fullback in goal line situations.

Hicks is a beast who doesn’t get enough respect. This is the season where he should be getting more national attention and accolades. Bradham had a good 2016 season. It remains to be seen if he’ll be suspended for the off-the-field situations he was involved in last year. Goode is a valuable backup because he can play all three linebacker positions and contribute on special teams. Walker showed good promise as a backup MIKE linebacker before suffering an ACL injury. He’ll have to prove he’s the same player after injury. Grugier-Hill is a nice special teams player who can also provide depth at the WILL spot. I imagine Schwartz is going to want to keep Daniels because he fits the Stephen Tulloch mold of a thumper. I’m going heavy at linebacker here in part because of the uncertainty with Bradham’s status. The Eagles will need depth if he gets suspended. 2017 fifth-round pick Nathan Gerry is a prime candidate to end up on injured reserve with a “phantom” injury. The Eagles will want him to spend time bulking up as a rookie. The former safety is only listed at 218 right now, which is pretty light for a linebacker. I still expect Mychal Kendricks to be traded before the season so that’s why he’s not listed here.

Not exactly the most inspiring group. Before we get started on the individual players, I do think that this position can benefit from two things: 1) an improved pass rush and 2) a solid safety tandem behind them. Still, this isn’t a depth chart filled with studs. Mills was rated as PFF’s worst NFL cornerback last year. He’ll have an opportunity to step up this season but he has a lot to prove. Robinson has been at his best as a slot corner recently. He’s struggled to stay healthy so that’s something to keep in mind. Brooks is coming off injury. He was the Eagles’ starting slot corner in 2016 but he also saw some snaps on the outside at times. Douglas, the team’s third round pick this year, has a real chance to start as a rookie. It’s not a guarantee but the opportunity is there for him. Smith and Grymes both ended up on the roster at times in 2016. They’ll have to contribute on specials teams. Another bubble name to keep in mind here is Dwayne Gratz.

This one isn’t complicated. Jenkins and McLeod are two high quality starters. Maragos is a special teams ace. The only question here is: who will be the third safety? Jaylen Watkins filled that role last season. I think Brooks can beat him out. Despite playing less snaps, Brooks had more special teams tackles, forced fumbles, and interceptions than Watkins in 2016.

Sturgis has no competition this summer.

Dorenbos will use his magic powers to make Rick Lovato disappear.

It’s unclear exactly when Sidney Jones (Achilles) will return to football. The feeling here is the Eagles should be cautious and hold him out for the entirety of the 2017 season. Howie Roseman didn’t rule out that, but we’ll see.

Beau Allen suffered a pectoral injury and had surgery earlier this offseason. There’s hope he can return in time by Week 1, but nothing is guaranteed.

Both Allen and Jones will be candidates for the PUP/NFI list(s).