On Carl Lawson and converting pressure to production 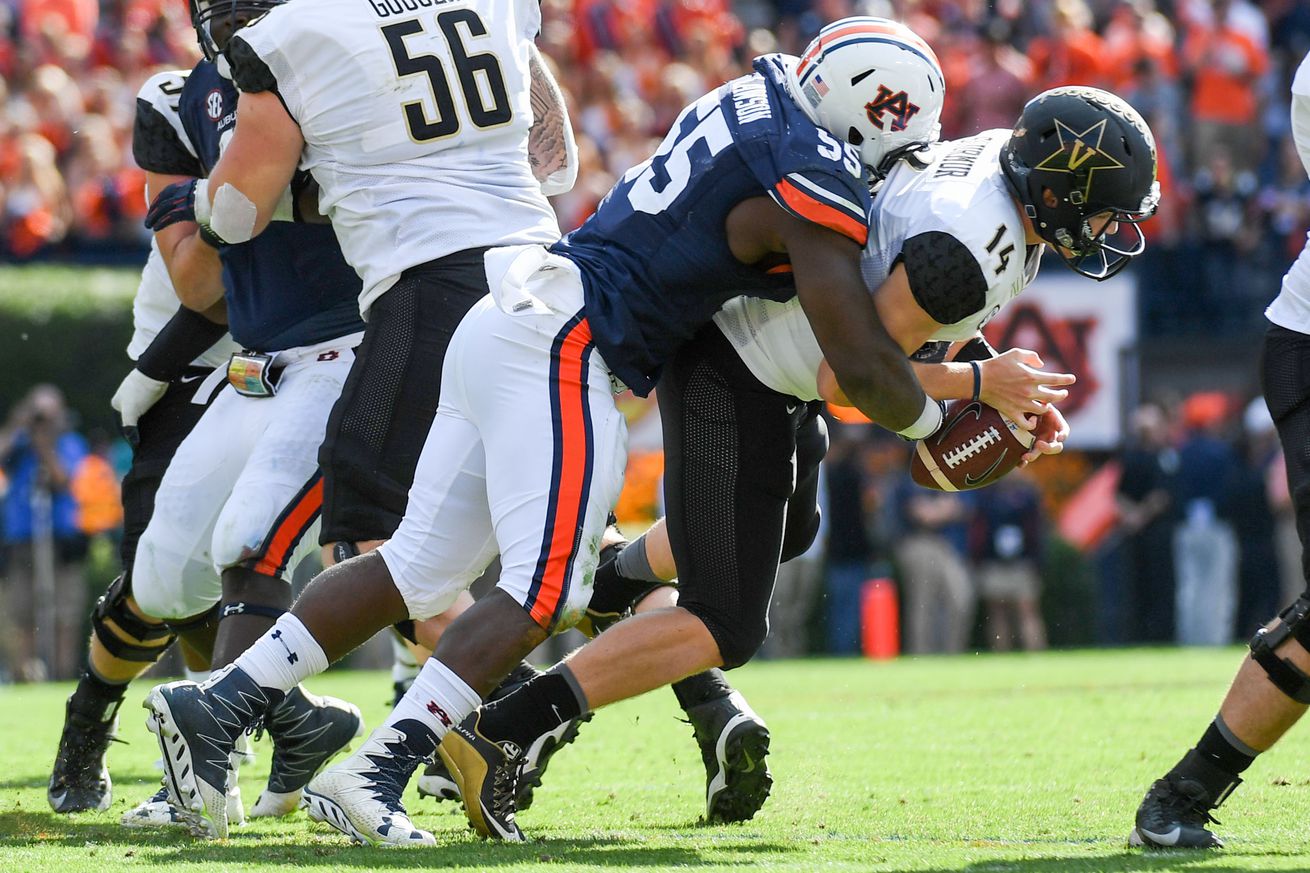 Always a force, Lawson was slow to see quantifiable production. In 2016, it came.

A few years ago, Carl Lawson was considered an elite high school player on his way to play for Auburn. His career got off to a promising start, as he posted four sacks, seven and a half tackles for a loss, two forced fumbles and seven hurries in his freshman year. Lawson had a pro ready skill set from a young age, playing his freshman year as a 6-2 and nearly 260 pound edge defender.

With the arrow pointing up, Lawson lost his second season to a leg injury that halted his stardom for at least a year. Lawson was able to return in 2015, but injuries continued to plague him throughout the season. Despite playing in seven games, it seemed like Lawson still never was fully healthy. Despite limited action, Lawson still had some impressive showings and posted one sack, three tackles for a loss and 11 hurries. 2016 first rounder, Laremy Tunsil, who many considered a blue chip player, said Lawson was the most difficult match up he had in college football. That is a major compliment considering Tunsil had faced Jon Allen, Myles Garrett, Tim Williams and a handful of other past and future high draft picks. Lawson's 2015 year was certainly encouraging despite the lack of on paper production because he was still able to fight off blocks to pressure the quarterback.

Lawson forced Lamar Jackson to panic here and it ended up being an interception for the defense. Lawson's ability to create pressure was evident in 2015, but he was rarely able to finish as evident by the stat sheet.

There is ongoing debate on the value of pressure players who rarely produce. Some people say disruption is production while others would rather find defenders who can finish plays. While I am somewhere in the middle on that debate, Lawson certainly had the ability to get better in 2016 and that is exactly what he did.

So if there is one thing to be known about Lawson, it is that he can rush the passer.

Lawson has impressive burst off the line and flexibility to bend around the edge, but his best asset may be his hands. He does such a great job getting his hands up and active immediately to fight off blocks. It is never just enough to be active though, as he has consistently great technique. Near the top or the arc, Lawson also does a very subtle head fake that freezes the tackle for just a second in which he then closes on the quarterback. He is a very advanced and intelligent player when it comes to pass rushing.

Lawson once again is able to get his hands up immediately to defeat the block and while this does not end up being a sack, is a good example of how quickly he can pressure the quarterback. If he can stay square here on the tackle, it ends up being a sack. It is minor fixes in a players game that can convert pressures even like this to sacks and part of the reason I am not incredibly worried about Lawson's lack of numbers.

Here Lawson does a much better job of coming through the block directly into the quarterback and drags him down, unlike the previous play. Also this is another great example of Lawson's technique. He fakes inside in the middle of his rush and subsequently beats the tackle outside for the sack. It is the little things like this in Lawson's game that are so advanced and encouraging for projecting him to the NFL.

The worry for Lawson is inconsistent run defense.

Here Lawson loses the initial battle with the blocker, loses awareness, gets washed out and gives up the edge of the defense for a gain by the running back. Lawson's inconsistency with finding the ball carrier is a regular issue for him.

Once again, Lawson looks just a step too slow in diagnosing the play and gives up the edge despite defeating the block relatively early.

Lawson's run defense is not a massive concern because he has shown that he can do it.

Lawson does an excellent job anchoring and setting the edge, preventing the running back for getting outside and allowing the rest of the defense to flow to the ball carrier.

This is a very impressive play by Lawson holding his block, not giving up the edge and subsequently beating it to find the ball carrier in space for the loss. This shows great awareness by Lawson and overall tremendous run defense.

It is important with prospects to never project things that they do not show on the field. Luckily, Lawson flashes in all facets of playing the edge position, which suggests that better coaching can help him be a complete player in the NFL.

Brandon Graham was a monster at Michigan despite being a bit short with short arms. His had great get off and incredibly good technique. Similar to Lawson now, Graham has trouble filling up the stat sheet but is consistently one of the more disruptive players in the NFL for the last few years. While Graham is and has always been a very good run defender, Lawson's flashes there are encouraging that he can soon make an impact on every down as well.

Lawson has had a nice career at Auburn despite dealing with injuries for a good portion of it. He has gotten better every season and at 21 years old, there is still room for him to get better. Lawson will need to add weight if he consistently wants to play with his hand in the ground, but his physical ability suggests he can play as a stand up rusher or a down defensive lineman in a 4-3 defense. The biggest thing for Lawson will be staying healthy, because a lot of his game is already there. If he can add weight and become a more consistent run defender, he has the potential to be a complete edge player in the league.

He fits the Eagles defense very well, especially as a wide nine rusher who can just get upfield without thinking and attack the quarterback. With a need at defensive end, the Eagles should absolutely consider Lawson at their first pick. For the rest of the NFL, Lawson is the best edge defender in this draft not named Myles Garrett and if his medicals check out, he should not fall out of the top twenty.

Does Yellow Bone has to do with Succes? Beyonce’s Father Claims She’s Highly Successful Because She’s A Yellow Bone!

Apple Pay is finally making its way to Japan in October, thanks to Sony’s FeliCa contactless tech

Blogging – How committed are YOU?

On Carl Lawson and converting pressure to production