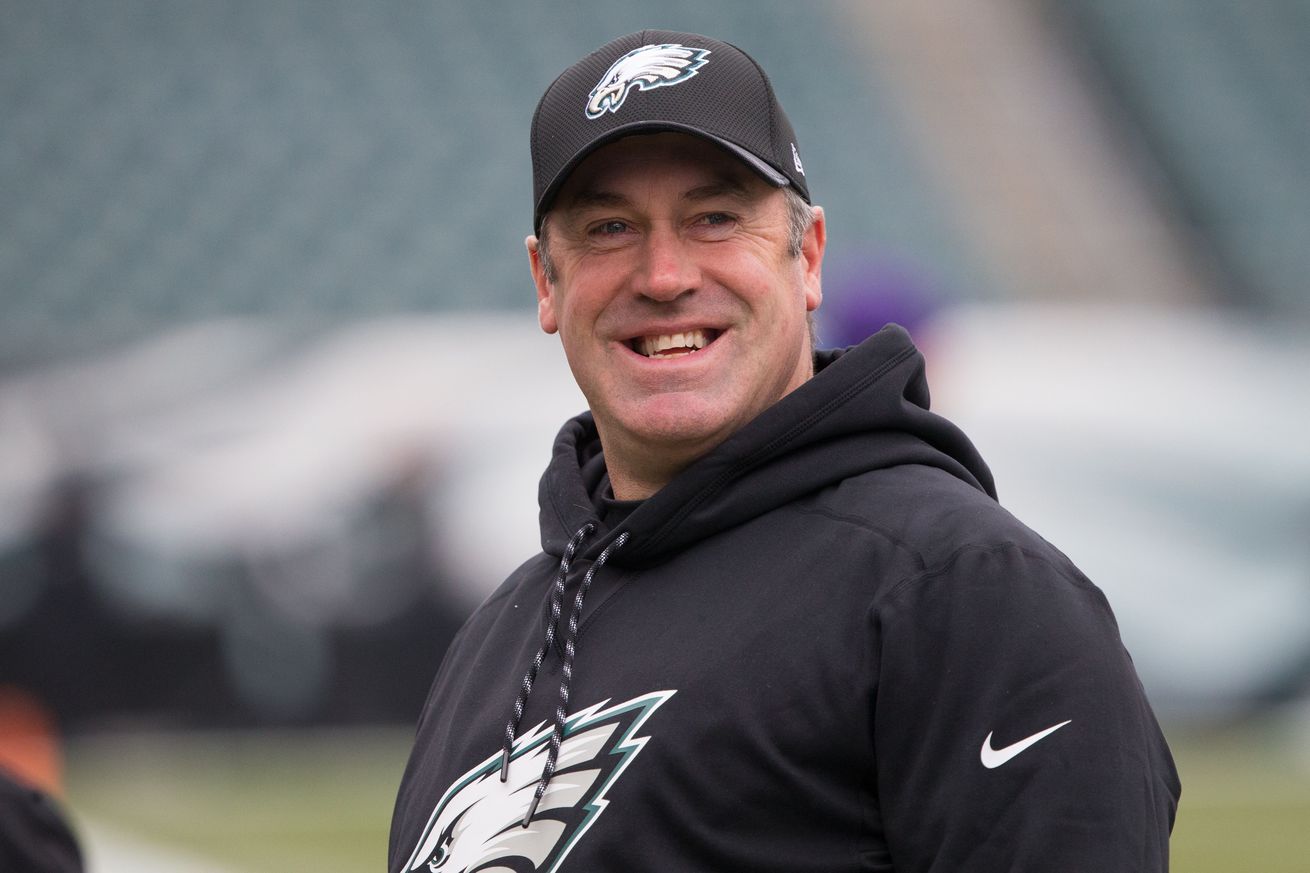 The rookie head coach said he thinks he and his staff have done a good job on game days.

Doug Pederson spoke to reporters for the final time in 2016. Here’s what he touched on:

Pederson said every player would practice on Friday. He said Allen Barbre, who will be Listed as doubtful, is going to be limited as he continues to test his hamstring. If Barbre can’t go, and even if he can, expect to see Isaac Seumalo, who will be listed as questionable but is expected to be fine, in at left guard at some point.

Jordan Matthews, who missed the first two days of practice this week with his Ankle Injury, is practicing Friday and will be listed as questionable.

Same thing for Jordan Hicks, who is also dealing with an ankle injury. He’ll practice and be listed as questionable.

And Halapoulivaati Vaitai is healthy, and will probably be the seventh active offensive lineman on Sunday.

Roster move in the wake of Ryan Mathews heading to IR?

“We’ve got to get through practice today, but we anticipate Terrell Watson probably being the guy up to give us depth at the running back spot.

“Right now, going in, he’s more of an emergency. We’d obviously love to see Byron quite a bit in this lsat ball game, see what you’ve got there. But [Watson] will definitely be there in case, and then some situational football.”

“Anything’s possible in this last game. It doesn’t surprise me. Knowing where they’re heading, going into the postseason, obviously getting him some snaps would be beneficial. And that’d be something that I’d even consider in that situation, if we were in that situation.”

What would your reasoning be behind doing the same?

“One, don’t risk injury to your starter, and two, your backup needs to be ready in those crucial moments. We were faced with it just a week ago with Chase.”

After a full season of you calling plays, how do you think you’ve done?

“I’ll evaluate that quite extensively in these coming weeks, but I’ve enjoyed doing it, number one. And I think from a game management standpoint, I don’t think it’s interfered with anything, from a decision standpoint. I’m getting a lot of information from other coaches and guys in the box. For crucial decisions, I think we’ve handled those well.

“Are there calls that I would do differently, looking back? Sure. There’s a few plays I would take back, call a different play, and I think that’s part of the learning process for me, going through it, and making myself better in the future.”

Where has Carson grown these past few weeks?

“I think with Carson, these last couple weeks, the way he’s been able to spread the ball around to different positions, he’s getting through his progressions better. Not getting stuck on a receiver. He’s utilizing his backs a little bit more, you’re seeing that. His tight ends underneath, things like that.

“And those are things you learn once you really get comfortable with the offense and understand where guys are going to be. I think that’s the thing he’s taken really big strides here in these last couples weeks of doing, and is something we can build on this offseason.

What plays are going to haunt you this offseason?

“Even looking back on a third down where there — and again, specifically thinking down and distances, those third and fives, not necessarily one specific, I know where maybe I’ve thrown the ball in that situation as opposed to running it in that situation. Teams will usually anticipate a throw. Those are in-game decisions you do to help your offense stay on the field.

“And areas of the field, where we start crossing that plus-40 yard line. You see teams, and I’ve been on teams, where that’s a good opportunity to take a shot, try to get a quick score, which we did last week. We hit Nelson in that area.

“Those are things I’ve learned where I would probably change the course of the play a little bit.”

Jeffrey Lurie said he wanted emotional intelligence in his coach. Has that helped you this year?

“That’s a great question, because I really feel we got to this point where we were still, each week, if we win this game, we were still giving ourselves an opportunity for the postseason. And then we slipped up and got on that losing streak right there before the Giants game.

“About three weeks ago, that team, this team, really could’ve flipped and gone the other direction. And I think by knowing and understanding the dynamic of that locker room, you go around and you talk to the leaders of the team, the leadership council, and you just keep fighting. You keep buying in.

“For me, that’s been a defining moment, this first year of these guys really buying into what I’ve been saying. Keeping my messaging consistent with the team, and letting them kind of take charge with it.”