The Linc: Howie Roseman makes more trades than anyone 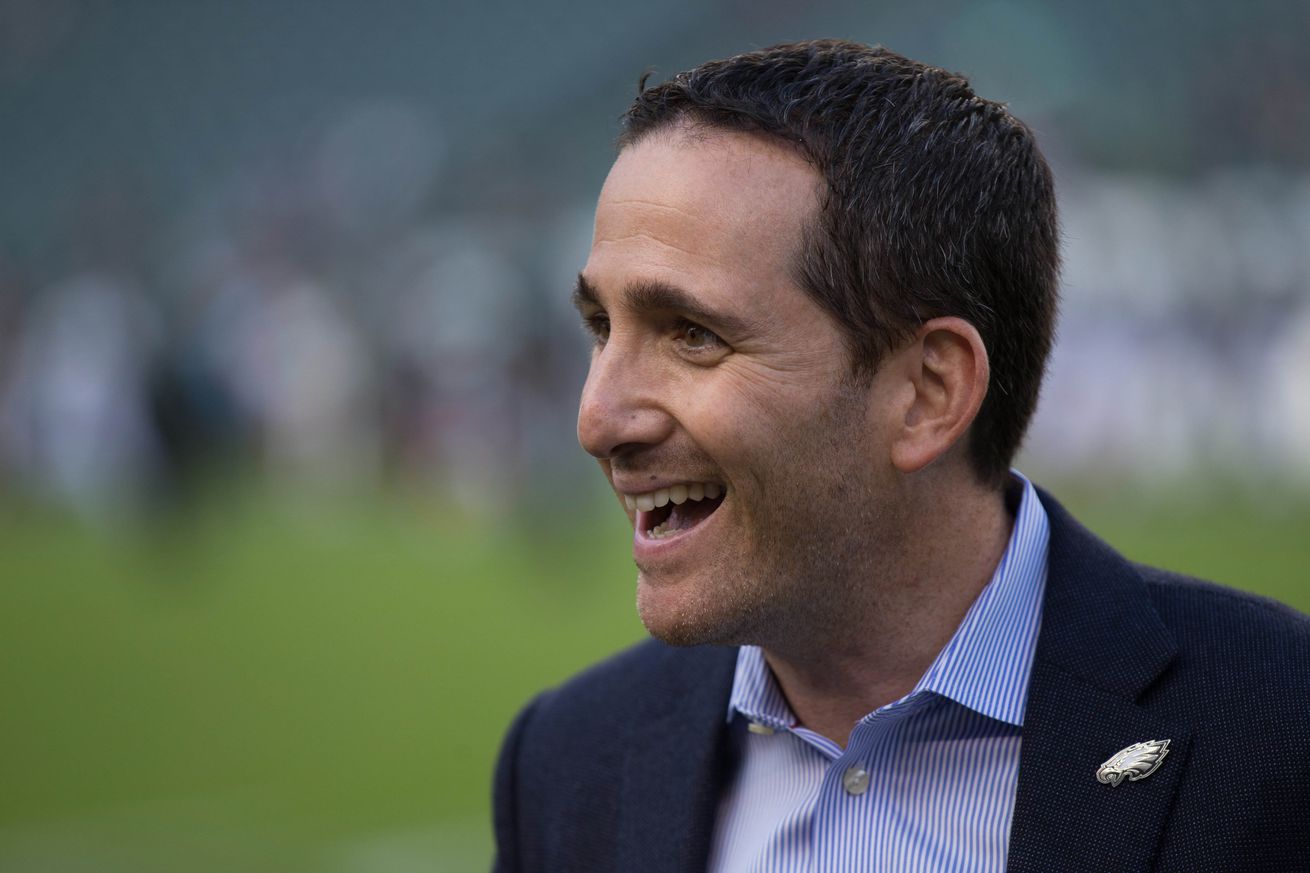 The Eagles' GM is handling this offseason like he's playing Madden.

Eagles news and links for 9/7

Wentz can often compensate for what he lacks in experience with his athleticism. Nearly every practice there was an example when he would do something with either his arm or legs that made the Eagles buoyant.

"There were times when you would just watch him throw and kind of turn your head and it's just a unique talent level," Roseman said. "And then the next play, he'll go off and run, and you go, 'Oh, I forgot he can do that.' "

Pederson recalled an off-balance pass during OTAs. Wentz was moving to his left, but rather than throw toward the sideline with his momentum, he swiveled his torso and flicked a strike across the field.

"You don't see that every day," Pederson said. "It was one of those 'wow' throws."

Pederson's West Coast offense looked different with Wentz than with Bradford. There was more zone-read, run-pass option plays, and designed rollouts that accentuated the former's physical skills. DeFilippo equated Wentz's peripheral vision to that of an NBA point guard.

Tight end Trey Burton said he thinks defensive coordinators may eventually have to spy Wentz as they often do against mobile quarterbacks like Cam Newton.

This position group is the biggest question mark on the team. Matthews will be a good receiver and a focal point in Pederson’s offense, but they may get little production from the rest of the unit, even when Green-Beckham learns the whole system and isn’t limited in what he can do. Matthews should be 100 percent as he returns this week after missing the entire preseason, but will he experience any rust early on this season? I expect him to be fine.

As for Agholor, it’s very unclear how much he’ll give the Eagles. It’s possible he simply had a rough preseason and will make big strides this year — he is still just 23-years-old — but he didn’t give many reasons to be optimistic about his sophomore season. Green-Beckham should have a pretty big role in the red zone early on, and then his usage will expand once Pederson is comfortable with Green-Beckham’s understanding of the offense. Huff may get more touches via speed sweeps than receptions in some games, as Pederson seems committed to getting the ball in his skill position players’ hands in creative ways. As for Treggs, the recent addition to this unit, he gives the Eagles good speed, but it remains to be seen how good his route running is, if he can consistently get open at this level and how well he can catch the ball.

Eagles, Howie Roseman have no match when it comes to player trades - ESPN

According to ESPN Stats & Information, the Eagles have traded away 35 players since 2010 -- the year Roseman assumed the role of general manager. They are tops in that category by a mile.

It should be noted that Chip Kelly was given full control in 2015 when four of those player deals were done, but the Roseman-led Eagles were still far-and-away the leaders in this category.

The two next closest teams, the Seattle Seahawks and the San Francisco 49ers at 16 players traded each, have moved less than half as many since 2010.

While the Seahawks have demonstrated that a power can be built while going fairly trade-heavy, two of the more stable and successful franchises in the NFL, the Pittsburgh Steelers (3) and the Green Bay Packers (4) are near the bottom of the list. The New York Giants have traded just one player over that period of time, per ESPN Stats & Information.

Seven of the Eagles' trades occurred in this offseason alone, as Roseman worked to reconfigure the personnel grouping assembled by Kelly. Finding creative ways to shape and then re-shape the roster has been Roseman's calling card during his time in management, though the objective now is to develop some continuity.

Hayes: Howie isn’t acting like a guy on a short leash - Daily News

No GM in his right mind who has job-security angst marks his territory like Roseman has. Lurie banned Roseman from making roster decisions for a year, but as soon as Roseman re-entered the personnel department he doled out almost $300 million in contract extensions to players that he either drafted or signed.

That doesn’t even include the two-year, $35 million deal Roseman gave Bradford to stick around for another season or two. Now, that’s the sort of deal made by a GM who thinks he has to win immediately to secure his position. That, and the three-year, $21 million Roseman gave Chase Daniel to leave Kansas City and serve as Pederson’s mole.

A startling number of the moves King Howie has made since reclaiming his throne serve long-term growth and guarantee short-term growing pains.

Sure, Lurie said Roseman will be held "accountable" … but that accounting seems like it will come years down the road.

Sielski: Like his mentor, Pederson is a grunt trying to make the big jump - Inquirer

Reid began changing his approach in the spring of 2004, after the Eagles' third consecutive NFC championship game loss, when the Eagles traded for Terrell Owens. He never really changed back. But for his first five seasons as an NFL head coach, his method worked quite well, and as a quarterback who had spent five years in the league as a backup and who had gone undrafted following his career at the University of Louisiana-Monroe, Pederson was ideal for Reid's and the Eagles' rebuilding plan. If a quarterback can be a grunt, Pederson was a grunt. He knew why the Eagles had signed him: to hold a place for Donovan McNabb. If he and the Eagles surprised everyone and starting rolling toward a division title, great. If things went as expected, Pederson would still appreciate the opportunity to start, do his best, prepare thoroughly, and be a good and dutiful teammate.

That Pederson's background and personality have informed his brief career as a head coach is indisputable. How much it has - beyond the fondness for and belief in the principles of the West Coast offense, traits he shares with Reid - isn't yet clear. He feels a kindship, for instance, with backup quarterback Chase Daniel, from their years together with the Kansas City Chiefs and the parallel arcs of their pro careers. As another example, he was willing to cut two veteran wide receivers, Rueben Randle and Chris Givens, whose relative disinterest could have proven corrosive to the culture and atmosphere that Pederson wants to establish.

"I keep it in the back of my mind," Pederson said. "I just think every situation is different, every player is different. Circumstances are different. Guys approach things differently. You want to find the guys that are all in, and you want to see them every day out here work hard and practice hard and do the things right. At the end of the day, you're going to make tough decisions. But it doesn't factor into the decision-making, although I know I've been in that situation before. So I understand what both the veteran player is going through and an undrafted rookie might be going through."

Trading your starting quarterback a week before the season, as the Eagles did a few days ago with Sam Bradford, is a fairly unprecedented move in NFL circles. Less unprecedented, but still uncommon, is the other major decision that the Birds made over the holiday weekend: starting a rookie quarterback in Week 1.

If we do some simple math, there have been 320 Week 1 starting quarterback slots over the past decade. Of those 320, only 17 have been filled by rookies. Carson Wentz and Dallas fourth-round pick Dak Prescott will join those ranks this Sunday.

The No. 1 overall selection? Not so much.

Is Wentz really ready to start in the NFL? You never know, but probably not. This is someone who played just a couple of quarters in the preseason after only 1.5 years of starting at the 1-AA level or whatever it’s called now. The question the Eagles had to ask themselves is if it would be better for Wentz to learn by playing or initially sitting and watching Chase Daniel for a while.

Clearly, they feel Wentz will fare better learning on the job, especially starting off against a team that projects to be terrible like Cleveland. You're giving him the keys, but he doesn't have to go on the highway just yet.

With the team that traded the No. 2 pick (essentially passing on Wentz) coming to town this weekend, the Eagles-Browns game will serve as a referendum on the April trade in some people’s minds. As you’ll see, that would be a mistake.

According to the ultimate Eagles Insider, Dave Spadaro, the Birds will be wearing green jerseys and white pants for the home opener on Sunday.

The Linc: Howie Roseman makes more trades than anyone