"For The Good of the Game" 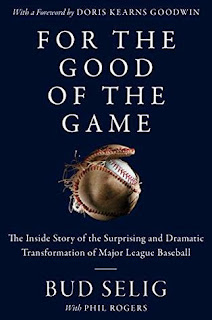 I've been a baseball fan all of my life, and especially during the reign of Bud Selig as the commissioner of MLB. So when I heard he was publishing his biography "For the Good of the Game: The Inside Story of the Surprising and Dramatic Transformation of Major League Baseball", I felt I should give Selig a chance and give it a read.

I've never been a fan of Selig, going back to the strike of 1994, which tested my love for the game and kept me out of MLB parks for over 5 years. And I thought he handled the infamous 2002 All-Star Game tie very badly.

But I must admit that "For the Good of the Game" is actually a very interesting and at times charming look back at his life by Selig, and if you walk in with an open mind, you actually enjoy this book.

There's no doubt that Bud Selig is a baseball lifer whose life revolves around the game. He started out his professional life as a car salesman in his Milwaukee home town, and graduated to ownership of the Milwaukee Brewers when they suddenly moved from Seattle in 1970.

The book is centered around two troubling times in Selig’s time as commissioner: the owners’ relationship with the players union and the influx of steroids into the game. He blames the players union for the disastrous 1994 strike, and blames President Clinton for reneging to back up the decision of a federally appointed arbitrator. (Selig even claims to have cursed out Vice-President Al Gore in one charged confrontation in the White House.)

He does accept some blame for the PED infestation into MLB, saying his office was slow to act, but also blames players union officials for dragging their heels as well.

Selig is proud of his accomplishments as commissioner: expanding the playoffs, baseball’s incredible growth as a business in the 21st century, and the institution of the luxury tax to help small market teams. But one thing under his watch that clearly bothers him is that Barry Bonds broke the home run record of his dear friend Hank Aaron. Selig goes into great detail early on in the book how going from city to city as Bonds approached the record was like the Bataan Death March to him.

I did find one glaring error in the book. As Brewers owner he says that he was approached by Red Sox GM Dick O’Connell at the 1976 Winter Meetings that O’Connell wanted George Scott back with the Red Sox because Red Sox owner Tom Yawkey personally liked Scott and wanted him to return and asked him to make a trade with Milwaukee. There’s just one problem with that. Yawkey died the previous July, so I don’t think he was around to ask O’Connell to make the deal. (The trade was made and the Sox gave up Cecil Cooper, not one of their better trades.)

Anyway, overall I recommend “For the Good of the Game.” It is Bud Selig’s story in his own words. Whether you liked him or not, it’s worth your time to read. Selig leaves a complicated legacy in baseball history, and he tried to straighten out the record. It’s up to you to decide whether he has or not.

"For The Good of the Game"