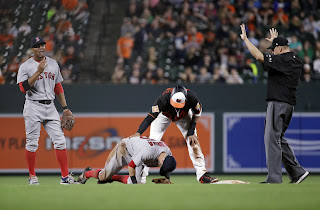 I haven't talked much about the Red Sox since the 2017 season started, so here we go.

Last weekend, we all saw video of that unfortunate slide Manny Machado made on Dustin Pedroia on a force play at second base last Friday night in Baltimore. Machado slide with one of his spikes high, and it clipped  Pedroia on his left leg and ankle. It forced Pedroia to the sidelines for three games, and he finally returned last night.

After Friday's game, Pedey downplayed the whole incident, and made it seemed like no big deal. Just one of the hazards of playing the position, and he seemed to absolve Machado of any blame, and certainly didn't think it was a dirty play. And you might figure the whole thing would drop there. But there were a few Red Sox players who weren't happy with Machado, and the feeling was that something was going to happen, probably later in the series when the time is right to get even with Machado.

Once Pedroia totally downplayed it, I thought it was all over. But with the Red Sox having a 6-0 lead in the 8th inning on Sunday, and Machado batting with one out and one on, Matt Barnes threw a pitch that went behind Machado's head and hit his bat. It was dangerously close, and Barnes was immediately tossed after the game, and later suspended for four games. (He would later claimed he wasn't trying to hit Machado, that it just got away. That's what every pitcher would say in that situation.) Machado was later seen back in the on-deck circle talking to Pedroia, who was in the Red Sox dugout. Pedroia was seen mouthing the words "It wasn't me, it was them." He was telling Machado that he wasn't the one ordering the headhunting.

This whole situation was disturbing on many levels. Thankfully, Machado wasn't hit in the head. But the fact that Pedroia claimed to have nothing to do with incident says something about what's going on in the Red Sox clubhouse. Pedey is the unofficial team captain, inheriting the title from David Ortiz after his retirement. He's the Red Sox senior member, and should get the "C" on his jersey. If he says the incident with Machado isn't a big deal, it should have died right there on Friday night. It's understandable that some of his teammates aren't happy with Machado, but if Pedroia isn't upset, they should let it go. Now, whether this was Barnes acting on his own or under orders to do what he did, we don't know. It was just a stupid thing to do. And with the Orioles coming to Fenway for four games starting on Monday, you know this whole mess isn't over.

Supposedly on Tuesday as the game against New York was rained out, Pedroia and the rest of team put up a unified front, that everything was cool between them and they all had each other's backs. They talked about the incident, and everything was fine in the clubhouse.

And the Red Sox promptly went out there the next two nights and didn't bother showing up, getting only one run in two frustrating losses to New York. They have now scored just 13 runs in the last seven games, including three shutouts, tied for the most in MLB so far. I'm not saying there is any direct connection, but since they came out and said everything is so hunky dory between them, the Sox basically sleepwalked through two uninspired losses against a division rival at home, while Chris Sale, MLB's best pitcher in April, pitched another gem on Thursday night that was once again wasted.

Do the Sox miss David Ortiz? From my perspective, they sure do. Not just his bat, but his leadership.

Dustin Pedroia is now the leader of the Boston Red Sox, and the players should follow his lead. He's The Man.

Or are things not as rosy in that clubhouse as we've been led to believe? We'll find out soon enough.