Four days of the Afcon 2017 tournament and I am now three down.

A Comparison of the Environmental Imp…
From Newbie to Digital Marketing Expe…
Amidst Crypto Decline, BTC’s Trading …
The Ultimate Winter Bucket List Accor…
How To Get From Lima To Cusco Peru {T… 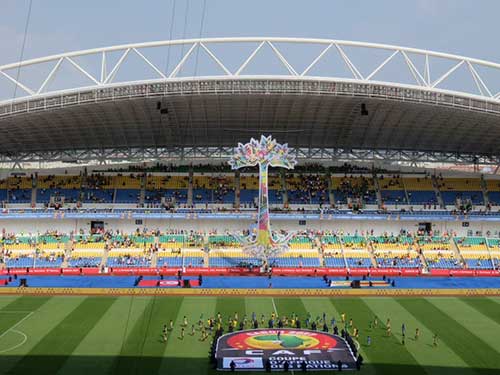 On the day of the game you would not have believed that as the opening ceremony began with only a few thousand in attendance. People kept coming even after Gabon kicked off the competition. There was a healthy attendance, but it was not full.

Keyboard warriors have been busy opposing the tournament and have allegedly been organising peaceful protests and asked people to stay away from the tournament. There have been no sign of any protests so far, although I have spotted police wagons loaded with police positioned in strategic places, but at ease.

Although nothing happened in the first 45 minutes, the football fayre improved considerably over the next 135 with the group ending up level and every team in with a chance of the next round after two draws.

The next day I went to the airport in the hope of sorting out my travel arrangements for later in the week. Instead of doing that I just got a plane to Franceville to watch that day's games. I was assured I would also be able to return that night. 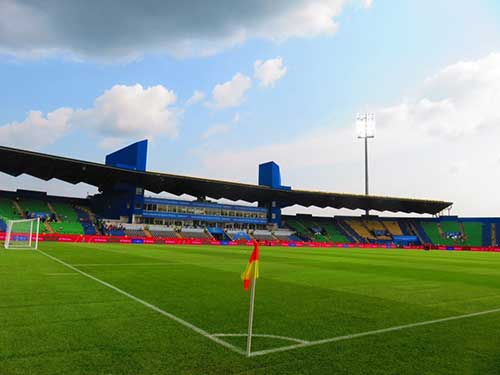 I met Maher an Algerian as I went in to the departure lounge, he was stopped before we entered and they took his bag, to put it in the plane.

There were people waiting to go to Port Gentil as well as Franceville and Maher then started to wonder where his bag was going. They hadn't asked; he hadn't told them.

Anyway, we boarded after checking with a porter who thought he remembered seeing a brown bag.

The stewardess asked which team we were, "FC Bohemia" I replied.

Trying to sort out a schedule is proving impossible, so I was talking to others, about future days.

Planes seem to be added to schedules at a moments notice.

The conversation went along the lines of

"What time should you be at the airport?" One hour before the flight?

"What time is the flight?"

"So what time do you have to be at the airport."

So you will gather that I still have no firm plans. 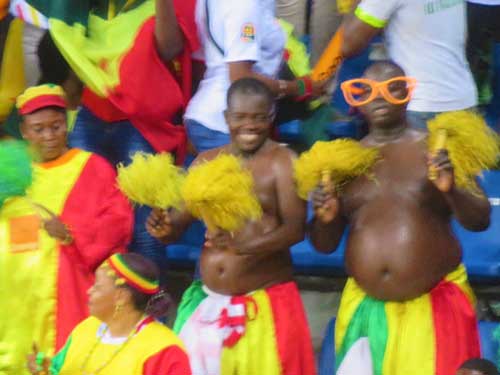 During the day I booked the hotel that I had stayed at the previous two nights online.
The stadium was about 20 kilometres from the airport, and the windy country roads were decorated with game for sale.... tortoise, fish, ape and others!

During the second game I made enquiries about how I would get back to the airport. I was told there would be a shuttle after the match and just to come to the reception.

Sure enough I went to the reception, and asked. Now I got a quizzical look. There no longer seemed to be one.

An official was called over and he said he would arrange it. I was told to follow a volunteer and led outside and across the road.

I waited as he went down to a car park and returned 10 minutes later with a mini bus. For me.
We waited as convoy of CAF officials left with a police convoy, and joined the end of it hastily making our way to the airport. I had noticed on the journey there that the cars have a tendency to drive in the middle of the road and put their hazard lights on.

As we climbed windy roads the convoy could be seen for some way into the distance.
I presented myself at check in, and they checked the list for my name. They double checked, triple checked and still couldn't find it.

They questioned how I had got to Franceville and luckily I found the boarding card I had been given earlier in the day.

With this they added my name to the list and I was on the plane eventually landing after one in the morning.

Staying at the same place meant getting a taxi and directing them was no problem.
I eventually arrived at the hotel at 1.45 and presented my email confirmation of my booking - one night for the equivalent of €100 or £100 using fairly recent exchange rates. (If you thought that was bad when I first landed I tried to change £'s and for Euros they offered 25% more!!!). 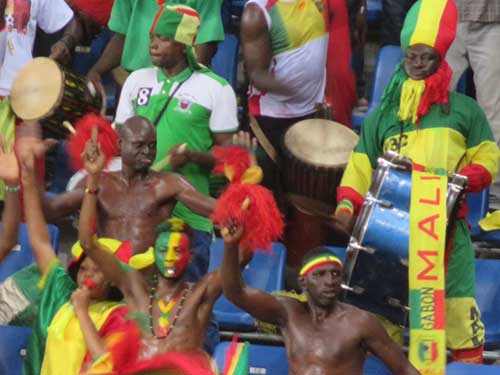 The surly night porter checked and once again my details could not be found. There was no room available. Faced with the prospects of walking the streets all night looking for somewhere to stay I asked if I could sleep on the sofa in reception. He grudgingly nodded. Now when they sent me an email to ask for my opinion of the hotel, you may have guessed they scored zero, but I did have to give them the highest resting for value for money as I didn't pay anything.

The next day I set off, rather tired, hoping to make it to Oyem, but as I was unable to confirm that I could make it back, I gave up on the idea. Sorted travel to Port Gentil and back and concentrated on finding somewhere cheaper to stay.

I had heard of a place by the beach, not far from the airport - The Tropicana. So I went there they were full. I decided that the location was so good that it would be worth staying there, so asked which date they did have a room free. Today was Monday 16th.

We got there eventually and a room was secured from dix-huit, the day after tomorrow.

Two Germans I encountered had met someone that worked for Puma and sorted a room for two nights, of course when we got there, the price agreed had changed.

I hope that you can begin to see that every step you take there is a problem, that had to be overcome, and as soon as you think everything is running smoothly an obstacle will be put in your way.
At night it was difficult to sleep as it was hot, when you put the air conditioning on the temperature was fine but the noise kept you awake.

The trip to Port Gentil was just 35 minutes but as we approached the plane seemed to dive bomb down to the runway and then do a wheelie on the tarmac.

We got a shuttle to the stadium and made our way along the thin strip of land. We encountered a roadblock and the police didn't want to let us through.

Shouts from the bus of journalist, got louder and they let us through. Thank goodness for that. It was 30 minutes before kick off and we were still battling through traffic. Then the engine gave out a loud grinding noise and we came to a halt.

Immediately we flagged down a bus that was with us and transferred to it making it in time to the stadium for kick off.

The games were not the best but the Mali fans were entertaining.

We had asked (repeatedly) what time the shuttle would leave and had been assured that it would be at the end of the game. I had spoken to a number of people who were also travelling back so that we could look out for each other.

Ten minutes before the end, someone beckoned for me to leave, I told Max And Helge but they wouldn't leave before the end of the match.

I departed and hoped they would catch up. By leaving early we managed to beat the traffic and arrived at the airport 25 minutes later. There we waited, our plane wasn't due to depart till 11.30 so they had over an hour to make it. The plane departed a few minutes late, but there was no sign of the two Germans.