Georgia Will Be The New Alabama 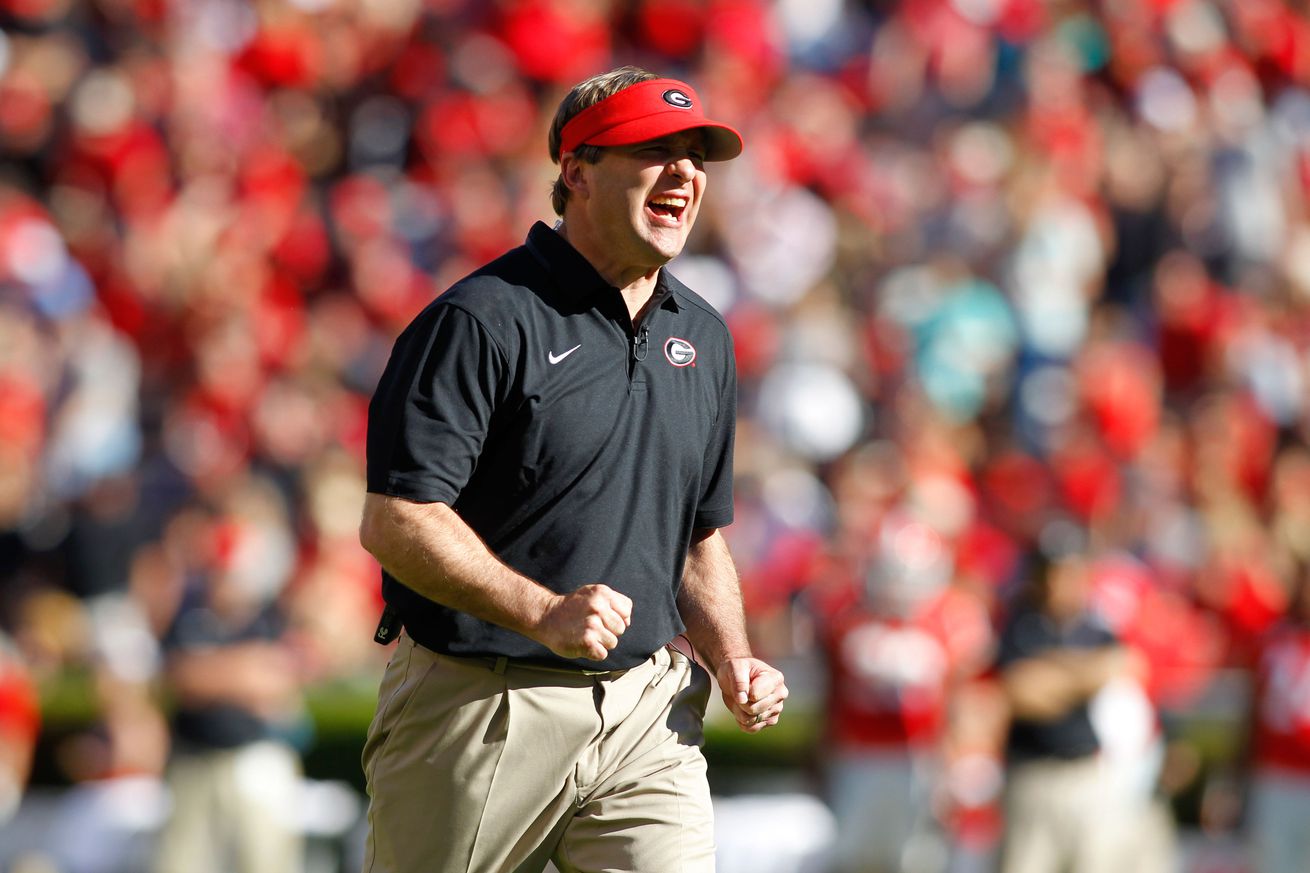 Kirby Smart is making moves and is about to change the game.

Alright. Alright. Alright. A new era of Georgia football is upon us. No we aren’t dreaming, the Mark Richt era has actually concluded, and the Kirby Smart reign has begun!  Moves have been made and coaches have been paid. Kirby has changed the game so-to-speak and appears to be making all the right moves. That deteriorated and corroded Lamborghini, that was maxing out at 70 MPH (otherwise known as Georgia Football), has finally been restored. And boy does it have some nice, new, shiny parts. Those supped up pick-up trucks and mini-vans (LSU, Auburn, Clemson, FSU, etc.) are about to not only get passed, but left in the dust. Finally, Georgia faithful, it is not a question of if, but a matter of when. That long desired national championship trophy is on its way back to Athens, where it belongs. Kirby Smart is making moves and in just six months he is already changing the game. So, here are 8 reasons why Georgia is about to start raking in national championships and become the new Alabama.

A day of mixed emotions, Rohit Sharma…
Cat Coronavirus Diary – Day 11
How to Grow Your Online Business by O…
Fields End Water caravan park
I was nervous about switching therapi…

It all starts at the top. Kirby Smart has won 4 national championships, 2 assistant coach of the year awards, and was the apprentice to "The Godfather" of College Football, Nick Saban, for the past 10 years. That’s one hell of a resume. Oh yea, and he’s also one hell of a recruiter. With just 2 months before NSD, Smart somehow was able to coach Alabama to another Natty, put together most of his staff, convince Jacob Eason "The Savior" to stick with the Dawgs, and sign a top 6 Recruiting class (arguably Georgia’s best in at least 5 years). Henceforth he was bestowed with the nickname "The Closer." But, in my opinion the greatest feat so far was the G day game. I don’t think people truly appreciate how incredible that was. It was ridiculous enough that he convinced over 93,000 (I’d say around 96,000) fans to come to a scrimmage on a Saturday in the spring. But the fact that he was able to convince Ole Greg Mcgarity to give Ludacris $65,000, condoms, cognac, Jo Malone candles, a box of frickin fruit roll ups, etc. (For a 15 minute performance) was just straight up legendary. Touché, Kirby. Touché.

Jim Chaney wasn’t the most popular hire, but as time has gone on I think most people have come around to him. He’s got plenty of SEC experience. He developed Drew Brees. Coached Sam Bradford (whatever that’s worth). He’s coached both a spread and power-I offense (He’s diverse). He convinced Jacob Eason to stay. He brought Sam Pittman over. And all the recruits keep saying he’s a genius. Don’t know about y’all, but that’s good enough for me.

Mel Tucker was a slam-dunk hire from the start. He coached in the NFL for 9 years (mostly as a DC), vastly improved Alabama’s secondary last year, and is also a great recruiter. If you’re the Defensive coordinator for the Chicago Bears, you know your sh**. Considering the guys he has committed right now, it's only a matter of time until he turns UGA into DBU.

College football is won in the trenches. That area of the game, especially the offensive line, has been Georgia’s biggest weakness over the years. Believe it or not, it has been 13 years since a Georgia O-lineman has been taken in the first round (George Foster). So, Stealing Sam Pittman from Arkansas was a huge coup for Kirby Smart and Georgia. He is regarded as the best offensive line coach in the SEC (so basically college football), and is already killing it on the recruiting trail. He puts guys in the league and will have Georgia’s O-line transformed very quickly. Retaining Tracy Rocker was huge as well. He is one of the best DL coaches and recruiters in college football. I mean the man signed 6 ESPN 300 defensive linemen in one class (2015). Needless to say, I don’t see Georgia losing many more battles in the trenches.

5. The Rest of The Staff

James Coley was home run hire. He’s also one of the best recruiters in football and has already made significant strides with south Florida recruiting (Riley Ridley, Matt Landers, etc.).  Sherrer is solid. Shane Beamer was a nice addition that will help with the Virginia, Pennsylvania, and DC area recruiting. Dell McGee should be a good recruiter, and that’s really all that matters at that position (Let’s be honest, even Johnny Manziel could coach the running backs this year at UGA and look like a genius). Glenn Schumann was Smart’s apprentice at Bama and seems to be a great recruiter as well.  And finally, the strength coach, Scott Sinclair, appears to be a splendid hire as well. (Rumor has it our old S&C coach is now working at LA Fitness, so we can only go up from there) Overall, this is an all-star group of coaches.

Greg McGarity and the boys are finally on board. After that Ludacris fiasco, it’s pretty clear that they are willing to do whatever it takes. The wallet has not only been opened, but has been handed over to Kirby. According to my boy, Chip Towers, Smart and his staff spent 219% more, in just 2 months, than Richt and his staff did in a full season of recruiting last year. One can only wonder what Mark Richt could’ve accomplished with this support.

Thanks to the all-star crew of coaches, Georgia is killing it on the recruiting trail right now. We currently have the 6th ranked class in 2017, but I guarantee it is a top 3 class by the end of NSD. Georgia is trending heavily for just about all it’s top targets and for the first time in years has really locked down the state. Richt and the buffoons had to beg to get top-talent, while Kirby and the boys are now using ESPN 300 recruits as back up plans. The 2017 class will be Georgia’s best recruiting class ever, and Georgia fans better get used to it. Recruiting will be at this level for awhile.

The controversial indoor practice facility is finally being built, and it will be well worth the wait. Once that puppy is finished, Georgia will have one of the best facilities in the country.

Rumor has it that Kirby took a play out of the Alabama playbook, and invited the whole Clarke-County police department to an open practice and meet-and-greet this spring. Well, I’ve got a funny feeling that Georgia’s off the field issues will soon be a thing of the past. You need everything and everyone on board to win a national championship and Georgia finally appears to have a full-wagon.

The state of Georgia is arguably the most talent rich state in the SEC/country. It is right there with Florida, California, and Texas. Surprisingly, for at least the past couple of years, more SEC football players have come from Georgia than any other state. Atlanta is also arguably the top city in the country when it comes to recruiting. The talent is there, and it’s finally being kept in state.

There is absolutely no reason why Georgia can’t start reeling in top three recruiting classes and winning national championships. The sleeping giant is about to awaken. Watch out Nick. There’s a new Alabama.

A day of mixed emotions, Rohit Sharma reflects on his 33rd birthday

Georgia Will Be The New Alabama