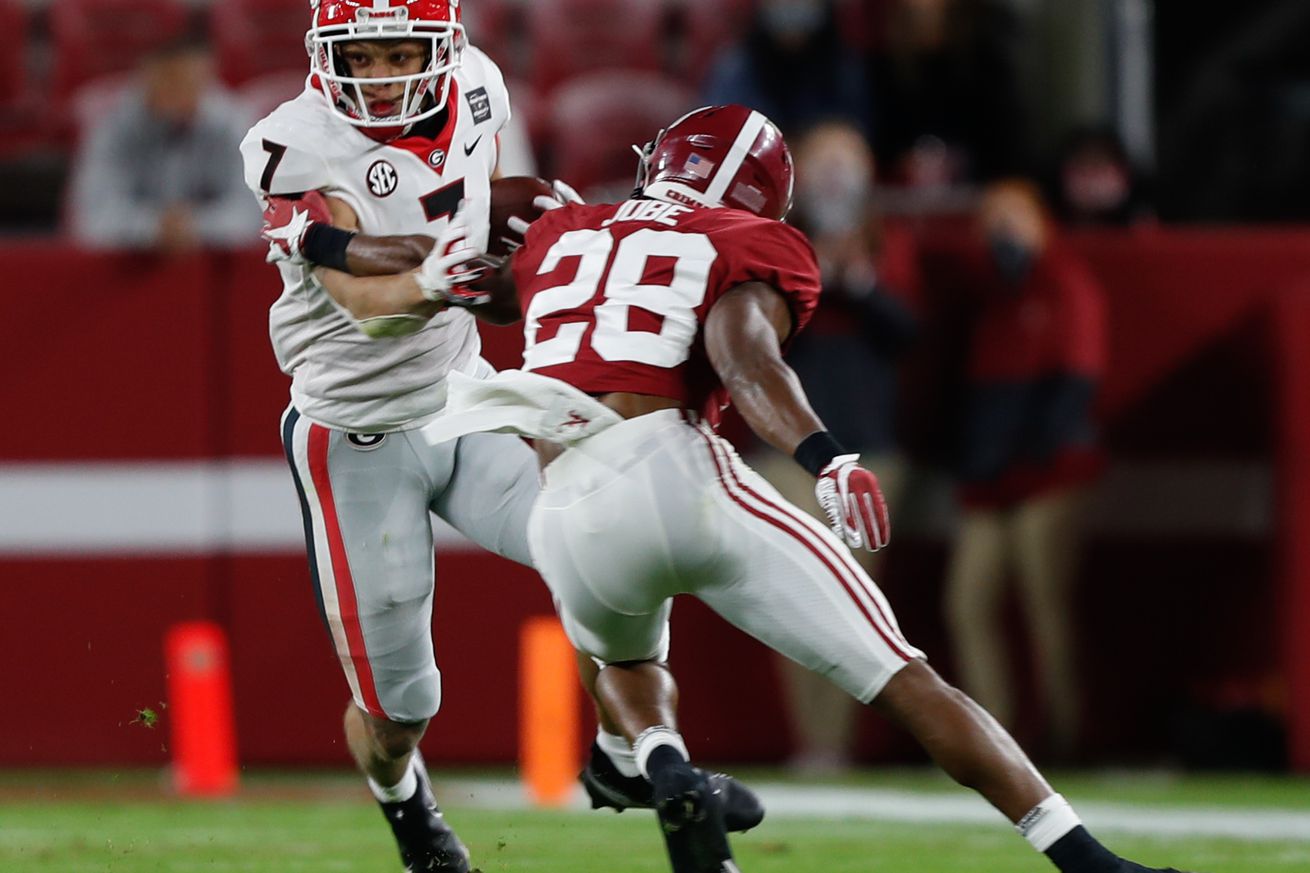 Well, that could have been more excruciating than it was, I guess.

In a departure from recent history the Georgia Bulldogs didn’t even allow us the heartbreak of a last minute, gut-wrenching loss to Alabama. Instead, the Athenians yielded the lead midway through the third quarter and never really threatened again, falling 41-24 in Tuscaloosa.

For the first time in his short tenure as Georgia’s starting quarterback Stetson Bennett appeared overmatched by the moment, throwing a pair of crippling late interceptions. Bennett’s balls were repeatedly batted down as Alabama defensive coordinator Pete Golding inconveniently noticed that Bennett stands 5’10 and 15/16 and likes to throw over the middle. The Mailman finished the night 18 of 40 passing for 269 yards with 3 interceptions. Each interception was turned into a touchdown by the Crimson Tide. 21 points in a 17 point loss. That, as the expression goes, simply is what it is.

Who can spot the pattern?

Alabama’s high octane offense found its spark at the same time the Georgia offense crumbled. The Bulldog defense surrendered 564 yards of offense on the night, much of it to Alabama’s fantastic receiving corps for whom the ‘Dawgs just didn’t have an answer.

Najee Harris conformed his status as the SEC’s top tailback, churning out 152 yards rushing on 31 attempts. The previous season high total had been Arkansas’s Trelon Smith going for 38 yards on 6 carries.

But the real damage was done by Mac Jones and his top two receivers Jaylen Waddle and Devonta Smith. Georgia hit Jones and forced an interception on his first pass of the night. They had more trouble getting to him for the remainder of the game and he made Dan Lanning’s defense pay for it. Jones finished 24 of 32 for 417 yards and 4 touchdowns. Smith caught 11 of those passes for 167 yards and 2 scores. Waddle manned 6 for 161, including a 90 yard touchdown that was potentially the dagger to the Dawgs’ collective heart.

Georgia simply didn’t have an answer for that explosiveness.. Todd Monken decided to lean on Stetson Bennett to win this game. Bennett started to press. We can only hope both of them learn from the mistake.

As much as fans wanted Kirby Smart and Todd Monken to open up the offense, that would have been a lot easier to do with Jamie Newman as the can opener. Newman pretty effectively left this team in a mess when he decided less than three weeks before the season to mothball it. Tonight was just the clearest demonstration of that fact. Stetson Bennett is a gamer, and a talented player in his own right. But he has physical limitations that simply are.

The Bulldogs still finished with 414 yards of offense on the night, a sound number against an Alabama defense that is loaded with talent. But, and I hate to keep belaboring this, 320 yards and no interceptions probably would have kept this one closer. Zamir White and Kendall Milton both looked solid, combining for 16 carries and 101 yards, a nifty 6.3 yard per carry average. That’s what worked. As much as we fans generally want to air it out, in this specific instance, the failure to run the dang ball was costly.

Where do we go from here? Well, there’s not a team remaining on the schedule that comes close to Alabama in terms of talent and explosiveness. Not to count our chickens before they hatch, but there’s every reason to expect the Bulldogs to get a rematch with the Tide in Atlanta. There’s a little to fix in order to get there, but a whole lot to fix in order to keep that hypothetical rematch competitive.

The road to redemption starts in two weeks against the Kentucky Wildcats. Until later...