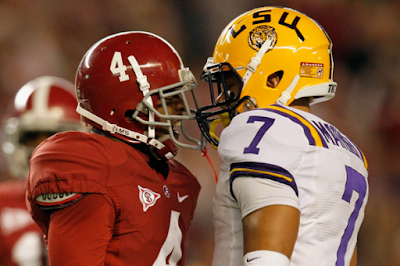 Questionable sports philosophies: College Football
When you are ranked number 5-10 in the country and you have to hope others lose to get a chance to win a championship something is fundamentally wrong. (When you compare it to the #FCS. [College Football Championship Series] #FBS might be a good name and I refuse to reveal the implied acronym.)
I was born the year that Nike was born so I understand the history and the tradition of the bowls, but in my philosophy accepting one's fate and not making changes to improve or take risks is a sign of someone who will fail nor achieve fulfillment. I am not attempting to tell college football to turn the gigantic ship 180 degrees nor am I saying that the game isn't extremely entertaining when there is so much riding on each week.
My future philosophy: Shorten the season, eliminate the big five conferences playing FCS teams or teams that are ranked lower than 50 in the country and extend the playoffs. You can keep rivalry games, high stakes games in conferences, and competitive games during the beginning of the season. #Evolve, and...don't worry.