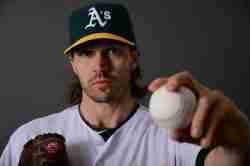 This week, Pitcher, Barry Zito announced his retirement through a statement in the Baseball Tribune.  Below is a quote from his retirement speech that sums up his career perfectly: "My baseball career has been a mirror to my life off the field, full of euphoric highs and devastating lows.  I've been at the top of a rotation and the 25th man on a roster. I've started Game 1 of a World Series in one year, and I've been left off of a postseason roster in another. I've been labeled as both drastically underpaid and severely overpaid. I've been praised as a savior and deemed a curse." Pretty self-aware wouldn’t you say? Over his fourteen year career, Zito spent it all in the Bay Area dividing his time between the Oakland Athletics and the San Francisco Giants.  Zito was a three time All Star who won the American League Cy Young Award in 2002.  He finishes his career with a 165 and 143 record with 1,885 Strikeouts and a bWAR of 33.5.  Early in his career, Zito seemed to be on a Hall of Fame path, but realistically he will struggle to get more than ten votes and will be a one and done player.  Still, anytime a former Cy Young winner announces his retirement it is big news and we here at Notinhalloffame.com wish Barry Zito the best in his post-baseball career.

JobTestPrep – Get The Job You Deserve
Top 10 Things to do in Panama, Where …
Useful Tips for Building a Stronger C…
Will there be homeless people in Heav…
Serena Williams And Other Celebrities…


This post first appeared on Not In Hall Of Fame, please read the originial post: here
People also like
JobTestPrep – Get The Job You Deserve
Top 10 Things to do in Panama, Where to Stay, Important Things You Need to Know
Useful Tips for Building a Stronger Company Culture
Will there be homeless people in Heaven? Who cares?
Serena Williams And Other Celebrities Who Believe Will Smith’s Career Is Over
Van Dyke Beard Style: 3 Trendy Looks & How to Get Them
Making a Career Out of Artifacts
10 Best Programming Languages For Blockchain App Development