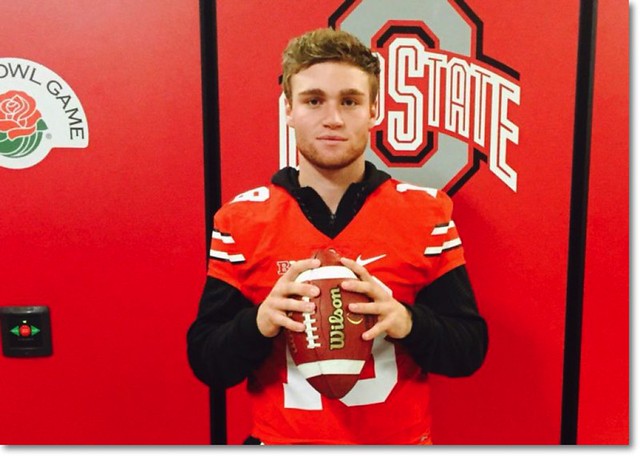 It's time for our monthly check-in on Big Ten Recruiting. While Ohio State and Michigan held steady at the top of the rankings, there's been plenty of movement below them. Here's where the rankings stood at the end of May:

Yes, Rutgers is on a tear, adding nine Commits since the last update.

[Hit THE JUMP for the rest of the post.]

I had four tiers last time around, but by now there's three clear tiers: Michigan and OSU at the top, a big pack in the middle, and a group of four lagging well behind the rest.

Ohio State had been in a holding pattern since March after racing out to a huge lead in the national team rankings. They still hold that top spot after gaining two huge commitments in June: five-star CA OG Wyatt Davis and top-ranked dual-threat QB Tate Martell. Martell's May decommitment from Texas A&M caused a Twitter meltdown from their WRs coach, which in turn caused more decommitments from A&M. I'm sure he'll encounter nothing of the sort in Columbus.

The Buckeyes did lose a four-star in OH RB Todd Sibley, but that was expected; they'd already told Sibley he'd have to grayshirt, and after months of taking visits he finally flipped to Pitt.

With five commits since the last update, Michigan has moved up from ninth to fourth overall in the national team rankings, closing the distance a little on OSU. The Buckeyes are still well ahead despite having four fewer commits—the gap between OSU and Michigan is nearly as large as the gap between Michigan and Rutgers. While Michigan might eventually catch OSU based on sheer volume—the Buckeyes project to have a smaller class—it's going to be tough to match their quality; the only OSU commit outside the top 300 overall is the top-ranked kicker in the country.

No program's class changed more over the last month than Rutgers, which picked up nine commits, including four-star MD OLB Tyshon Fogg. None of their other commits this month rank in the top 800 overall on the 247 Composite, however, and their 19 total commits is tied for second-most nationally (Western Michigan has 22). As other teams fill out their classes, RU is going to slide down from their current perch at #15 nationally.

Iowa slipped from 11th to 17th after spending June filling out the bottom end of the class. The Hawkeyes picked up six commits, all ranked below 850th overall, and lost behemoth three-star DT Juan Harris, who has now committed and decommitted from his home-state school three times.

Continuing the theme, Northwestern picked up three low-to-mid three-star commits and a two-star kicker; they remain one spot behind the Hawkeyes in the national rankings. With 17 early commits, none ranked in the top 350, the Wildcats will move down as other teams round out their classes.

Nebraska slipped in front of Maryland after picking up commitments from three-star prospects OG Broc Bando and DE Robert Porcher IV, the latter of whom held a Michigan offer, though probably not a committable one after the additions of Corey Malone-Hatcher and Luiji Vilain.

Michigan State no longer ranks behind any directional Michigan schools, which was fun while it lasted. They added five three-star commits this month, and while none ranks higher than 625th overall, there's potential for some to leap up the rankings: the lowest-rated of the bunch, FL DE Donovan Winter, added a Michigan offer after the Fort Lauderdale satellite camp. (M subsequently landed Vilain and no longer needed to pursue Winter.)

Maryland added only unranked three-star WR MJ Jarrell since the last update. They're one spot behind MSU at #28 in the national rankings.

If you wanted to split this tier in two, the divide would come between Maryland and Wisconsin, which is ranked #36 overall. The Badgers have been stuck on ten commits since early May. Penn State is in a similar situation; they rank #40 overall and haven't added anyone to the class since the end of April.

The Basement: Boilers Up

The next Big Ten squad is all the way down at #74 in the rankings, but after claiming only one commit in the last update, Purdue will happily take that for now. The Boilermakers have picked up six commits over the last few weeks, headlined by the #25 pro-style QB in the country, Californian Nick Sipe.

Illinois stays at 12th in the conference, mere fractions of a point behind Purdue. Of their six total commits, two of which pledged this month, only two rank among the top 1000 (yes, one thousand) overall prospects. Minnesota ranks a couple points below the Illini after adding three players in June that all rank outside the top 1000.

That leaves Indiana, which doesn't have a commit ranked in the top 700, to bring up the rear.