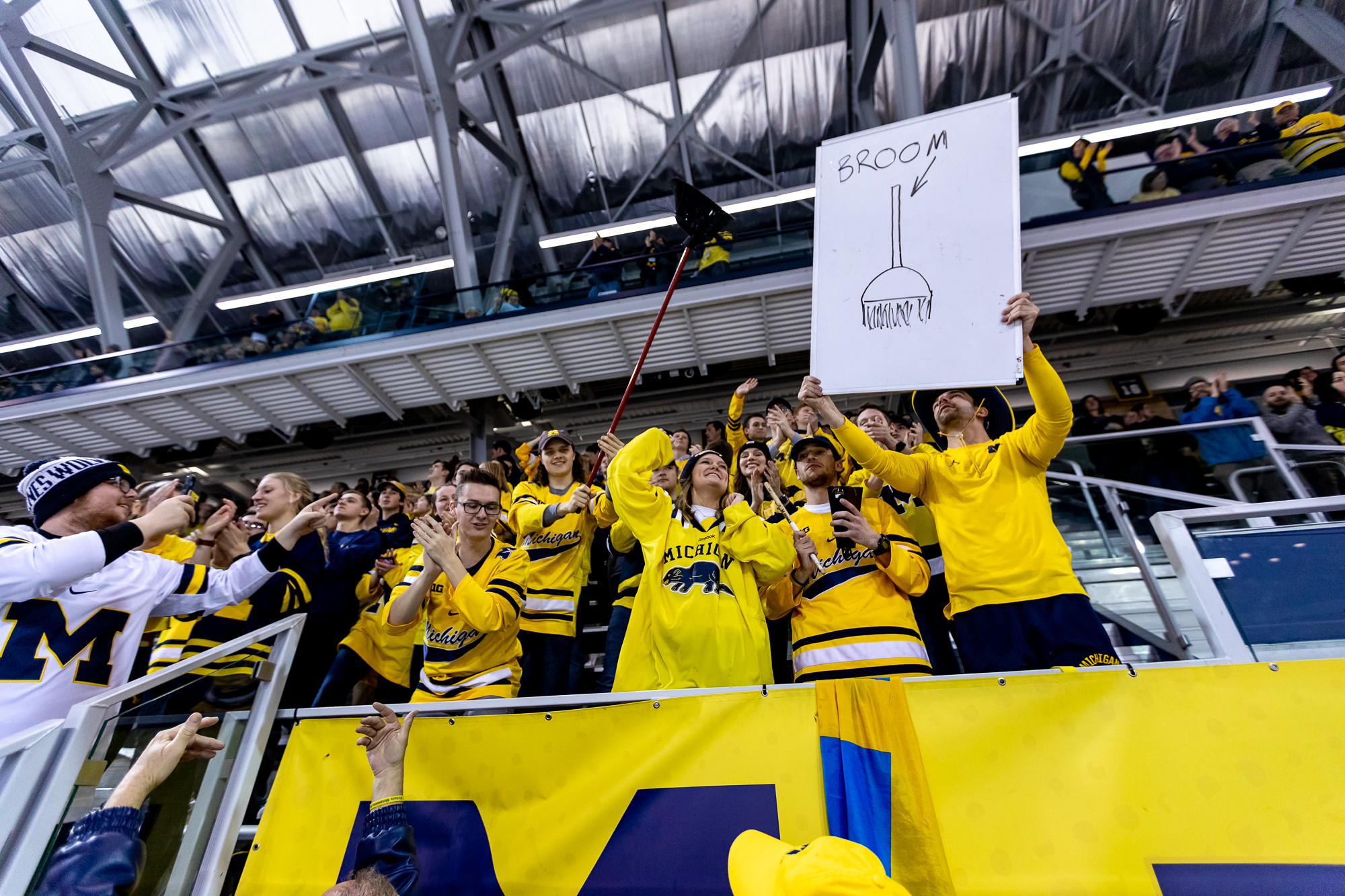 Will Lockwood burst out of the zone with the puck by himself, chased by three defenders. None could catch up but the best-positioned had enough of an angle to push Lockwood a little wide and force a shot. John Lethemon, amongst the national leaders in save percentage with a .942 before this series, was able to come out and cut the angle down.

It was a decent chance; it was Michigan's second shot. It squeezed through Lethemon somehow. Goal.

Michigan hockey's twitter account is pretty good about posting videos of all goals no matter how obscured they are by student camerawork—looking at you, unnamed Penn State sophomore—and this one didn't make it to the internet, because… eh… I mean, MSU scored immediately afterwards and it wasn't the kind of goal that absolutely had to get up. Michigan's third was in a similar vein and did get up:

Nick Blankenburg with his 4th of the season from Cam York and Jake Slaker!

Clever play by Blankenburg to see Lethemon looking to the wrong side of the very small person trying to screen him. Also not a .940 goalie play.

On the other end of the ice, Strauss man flung a desperate stick at a shot headed for an otherwise empty net. The deflected puck spun wildly, plunking first one post and then the other before Nolan Moyle swept it off the goal line on an incredibly improbable return trip along the goal line. If Moyle wasn't there the puck might be pirouetting from one post to the other still. It was one of the damndest things you'll see in a hockey game, but it was not a goal.

It's worth exploring how in the hell Michigan has gone from dead in the water to an 8-1-1 surge that is two-thirds of the way towards one of the more unlikely postseason bids in Michigan history. What changed? A fair chunk of the answer is that stupid crap stopped happening to Michigan and started happening to the other team.

This series transpires twice a year. The first edition was another weird schedule event—a Thursday-Saturday home and home—but otherwise completely different. In the first outing Michigan was up 3-1 in the last minute of the second period, then gave up three straight goals to lose. On Saturday Michigan had a 5-1 edge in power plays and outshot MSU 35-26; they did not score in a 3-0 loss. Since I noted that Michigan's even strength shooting percentage was an absurdly low 5.8 they've started flinging in one or two long-rangers per game; they're up to 7.1.

[After THE JUMP: the other half of the equation is scoring rad goals]

Hayhurst with his second of the weekend, plays Johnny on the Spot and puts Michigan back on top 2-1#GoBlue〽️ pic.twitter.com/bqNiY9kpos

In fact, other than a seeing-eye puck from Jack Summers, all of Michigan's Friday goals were Grade A chances, give or take a half-boards one-timer:

There were days earlier this season when I steeled myself for three hours of hucking pucks at the net and hoping two of them pinballed through. Heck, even the Notre Dame sweep that kicked this stretch off didn't look too much different than the rest of the season with two goals in each before empty-netters. When Michigan blew the doors off PSU 6-0 with a third period surge you kind of wrote it off as a weird night.

No more. Ten games deep into the second half it's impossible to deny that this hockey team doesn't have a whole lot in common with the one from fall. Strauss Mann is still stopping everything it's reasonable to stop. Garrett Van Whye is still ripping around the ice. The defense is extremely solid except for ten minute stretches against Ohio State (for some reason) in which it is a disaster.

That's it. The hopeless powerplay and depressing quantity of dump and chase possessions are miraculously repaired. Goals are being scored—the announcers last night claimed that after the break Michigan was scoring 4.2 per game, a number that led the country(!!).

If this still sounds exactly like basketball, ah yup. Unfortunately for hockey, the Big Ten is not the best conference in the country and there was no Atlantis equivalent that gave them a hefty buffer to play with. Michigan burned through games in the first half of the season with little to show for it and must now keep the pedal all the way down if they're going to scrape into the tournament.

Scorers emerge. You forget that Jake Slaker started off with no points for a long time and since he broke through he's scoring like a legitimate top line player:

Jake Slaker has 23 points in 17 games since he scored his first goal of the year at UNH on Nov. 23. He has 7 multipoint games in that stretch and only three games without a point

Hayhurst has eight in the ten games since the break and has scored in four straight; Lockwood has a PPG as well. 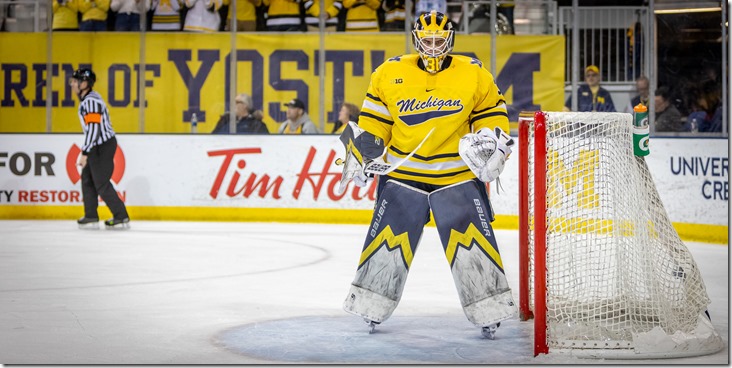 Goalie of the year yoink. Michigan's work this weekend plunged Lethemon into a tie with Strauss Mann for best save percentage amongst Big Ten goalies at .935. If Michigan maintains this surge and is able to slide into second or third in the conference he'll probably win it.

So after treading water Michigan can start moving up rapidly again. I punched a Michigan sweep of Notre Dame into College Hockey Ranked's Pairwise Calculator and Michigan zips up to #14. In the real world other teams in the vicinity will be playing games and a couple are likely to match a hypothetical M sweep, but don't despair. Michigan's play has done a lot of work.

Conference complications. Michigan controls its own destiny for a Big Ten regular season title after starting the conference play 0-6-1. The ACC-Coastal-ass nature of the Big Ten has a lot to do with this. Look at this heap of Pitt:

Anyway. Michigan has two games in hand on PSU, which is three points up, and plays Minnesota to wrap up the regular season. This weekend the Gophers go to Hockey Valley, so someone ahead of them is getting points. 3-1 might do it, depending on events elsewhere.

Michigan's quest for an at large might actually be hurt by winning the conference since they wouldn't get an opening-round series, but they would get to host the semi and final for an autobid. Instead of two wins and hoping for some more wins that would be two wins and in. Also: banner.

Michigan was picked sixth in the preseason poll.

Love how they are playing. I hope they play two more times this season at the LCA.

It really is like watching a completely different team.  Confidence is a helluva thing.

This is so cute. There’s a lot of time on some people’s hands.

Lol and yet you have an account here and are posting. You see the irony I assume ?

The people who said anything bad about Mel Pearson can kindly shut up since they clearly don't know what they're talking about. Much like basketball - the future is bright due to recruiting and talent, but wins now prove that our guys can coach, too.