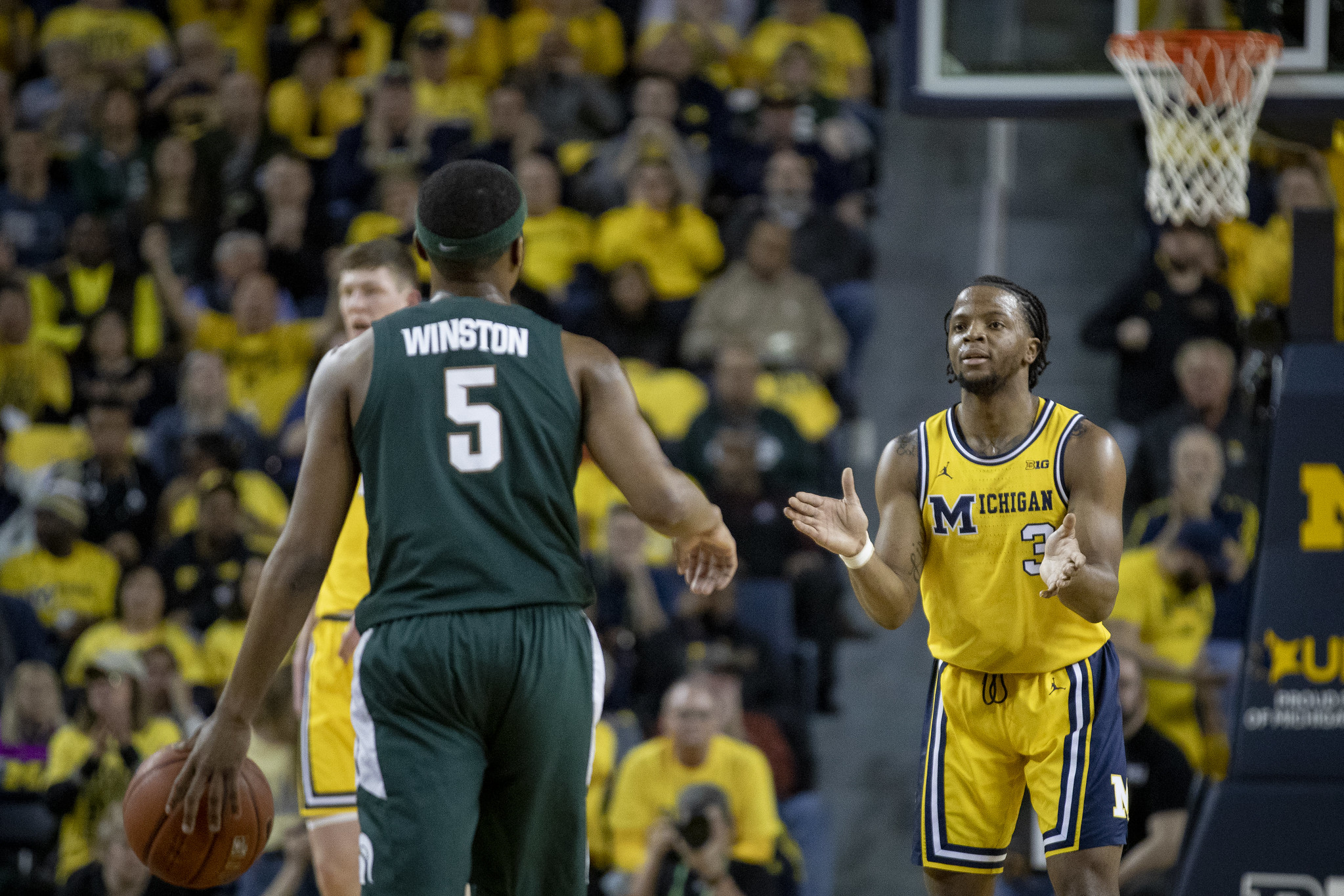 Isaiah Livers is out indefinitely, which is a significant blow. Michigan will have a hard time replacing his ability to hit shots, not to mention his defensive ability and versatility. Brandon Johns takes his spot in the starting lineup. 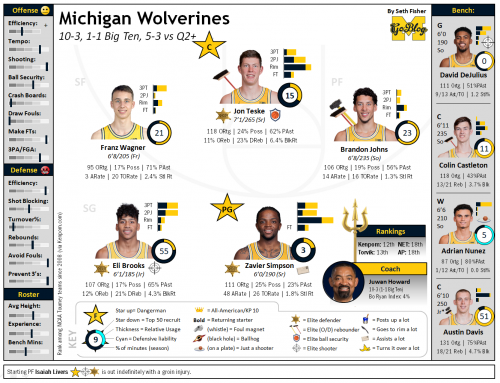 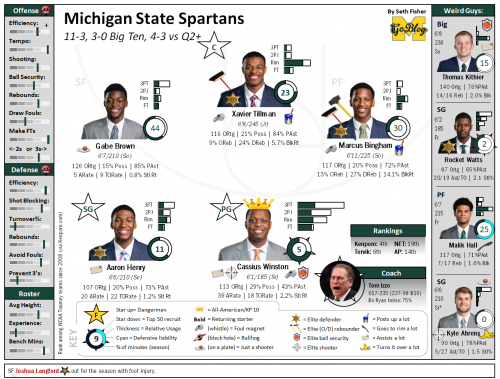 Tom Izzo is still reaching pretty deep into his bench at this stage of the season. In addition to the players listed above, you can also expect to see backup point guard Foster Loyer (who'd get the sniper tag).

[Hit THE JUMP for the rest of the preview.]

Michigan State was the first victim of the AP #1 curse this year. While the consensus title favorite entering the season still ranks near the top of the computer projections (#4 on KenPom, #6 on Torvik), they're 14th in the AP poll after taking three losses in non-conference. While losing to Duke and Kentucky is quite understandable, the neutral-court loss to #60 Virginia Tech was not a vintage performance, leaving the Spartans with only one top-50 quality win this year—a three-point victory at #21 Seton Hall. Thus far in the Big Ten, they've sandwiched a trip to Northwestern between games against Rutgers and Illinois at the Breslin Center, the third-easiest slate any team in the conference has faced thus far.

The man is still the man. Point guard Cassius Winston hasn't quite been the statistical wonder he was last year; he's still posting a 113 ORTG on 30% usage, averaging 17.8 points and 6.1 assists in 30.6 minutes per game. Much of his statistical dropoff, particularly in the passing department, can be attributed to this year's team failing to adequately replace the outside shooting that departed with Matt McQuaid and Kenny Goins. Not all of it, however, as Winston hasn't been as good hitting shots off the dribble, a huge part of what has made him so effective operating out of the pick-and-roll. Get him away from the middle of the floor and his production takes a tumble: 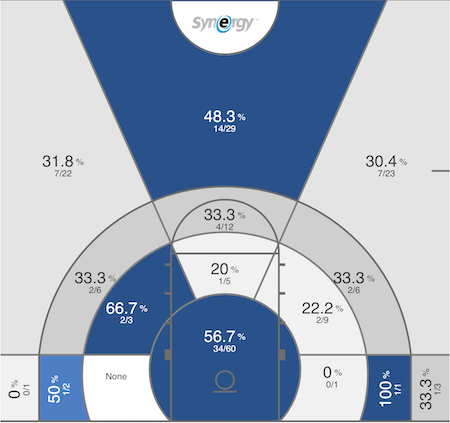 Winston's still hitting nearly half his runners, according to Synergy, so he'll test Michigan's drop coverage, though as you can see above he hasn't exactly been a killer from midrange. He's been excellent in the last three games he's played, scoring 21 in each. He missed the Western Michigan game last week with a bone bruise in his knee; that didn't appear to impact him last night against Illinois. He's grading out in the 53rd percentile as the primary defender, per Synergy. If Zavier Simpson can come close to canceling out Winston's production, Michigan has a great chance to win this game, and that doesn't seem far-fetched.

A thorn in Michigan's side last year, big man Xavier Tillman got off to a slow start to the season, but he dropped 20 on Duke and has taken KenPom MVP honors in three of the last five games. His game last night against Illinois may have been his most complete of the season, as well as representative of the improvements he's made in his game. Tillman scored 19 points, hitting 6-of-9 twos and his only three-point attempt, posted seven boards, four blocks, and a steal, and perhaps most surprisingly dished out six assists with no turnovers. He's become a productive passer, often working out of the high post in two-big lineups. His finishing out of the pick-and-roll, however, has fallen off significantly from last year.

The third mainstay in the starting lineup has been sophomore wing Aaron Henry, who may be MSU's best pro prospect despite being more of a role player at this stage. Lanky and quick, he serves as State's perimeter stopper, and he's a good finisher with a serviceable three-point shot. While he's raised his assist rate up to 20, his turnover rate remains higher than ideal, and he's much more effective as a spot-up shooter than a creator.

The other spot on the wing has been up for grabs for much of the season after Josh Langford was ruled out for the year with a foot injury. Early in the year, Izzo chose to start a two-guard lineup with talented freshman Rocket Watts, who's flashed great potential but really struggled to score with any efficiency—he's made 41% of his twos and 30% of his threes.

An injury to Watts opened the door for 6'7" wing Gabe Brown, who mostly sticks to the perimeter and has knocked down 34% of his threes. While not yet a true sniper from the outside, Brown is 38-for-42 from the free throw line in his career, so he's got a lot of untapped shooting upside. He's not on Henry's level as a defender, however. Watts has returned to the court but he's now coming off the bench.

After coming off the bench for the first five games, talented 6'11" string bean sophomore Marcus Bingham has taken a hold of the starting job. While he's not a shooter, he can be effective in the dunker spot, playing the high-low game with Tillman, and crashing the glass. He's posting great rebounding and shot-blocking numbers. That said, he only plays 31% of MSU's minutes—his 21 minutes against Illinois was a career high—after barely seeing the court as a freshman. His feel for the game and his body are both works-in-progress. While MSU is a better team with him on the court, the game takes on a distinctly ugly feel. 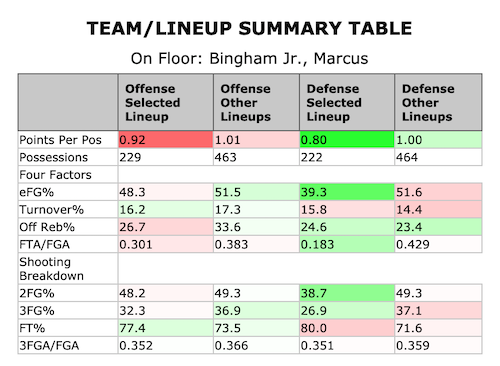 While Bingham turns State into a defensive juggernaut (albeit with some three-point luck), his limitations exacerbate their shooting problems, and despite his impressive individual numbers they become a worse offensive rebounding team. Neither team comes close to scoring a point per possession when he's on the floor.

That means we'll see about as much of Thomas Kithier, an offensive rebounding specialist whose on/off numbers are almost a mirror image of Bingham's. He's got a better feel for the offense; he's not nearly on Bingham's level as an athlete or defender. Freshman Malik Hall, who looks and plays like a skinny freshman version of Goins, had a 17-point breakout in the Seton Hall win and has otherwise seen his playing time wax and wane. He even wears the same number (25) as Goins did. Kyle Ahrens, who hits some threes and otherwise doesn't contribute much to the box score beyond turnovers, also gets some time when Izzo needs, uh, intangibles.

Backup point guard Foster Loyer has been on a shooting tear, hitting 9-of-11 threes in his last four games, though that includes a 7-for-8 mark against EMU and WMU, the latter a game he started with Winston sitting out. He's a very good shooter—he boasts a career 31-for-33 mark from the line—and a decent distributor, though opponents should never respect the drive when he runs the pick-and-roll, as he's attempted all of one shot at the rim this season. He becomes less effective as a passer when the competition ramps up, probably because he's generously listed at 6'0" and isn't an athletic marvel. 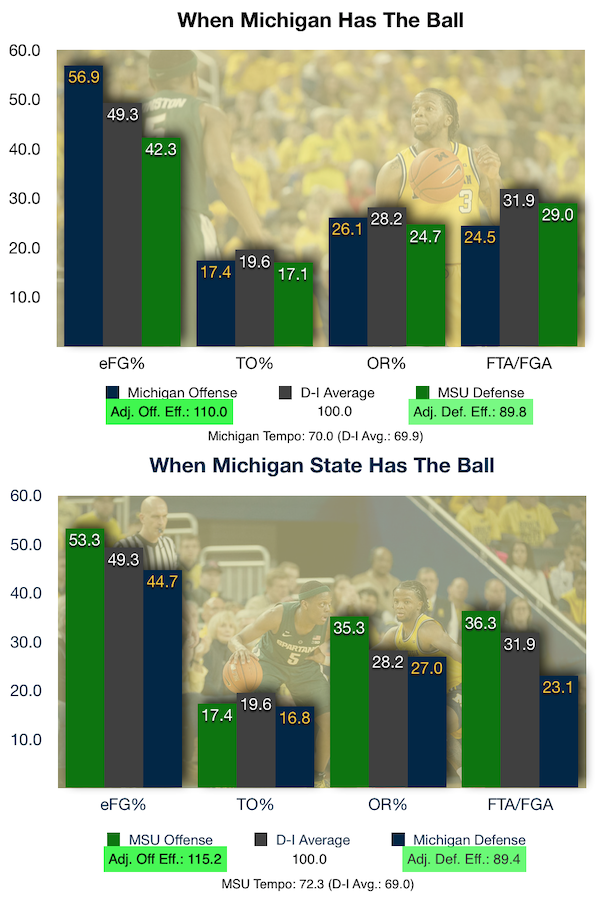 The Spartans boast KenPom's #2 adjusted offense despite average three-point shooting. They've been good, not great, at finishing inside the arc. What makes them a tough stop is their excellent offensive rebounding, a major cutdown in turnovers, and relatively frequent trips to the charity stripe. They rank in the top 85 in all four factors. While I'm not sure even MSU fans would call this a great offense, they've put up great overall numbers so far because they don't do anything poorly, and they've only had one true clunker (the opener against UK).

Their defense ranks six spots below Michigan at #30. They're better at rebounding, which shouldn't come as a shock, and stingier against two-point attempts. While teams don't hit threes at a high rate against MSU, they allow a good deal more attempts than M's second-ranked defense in that regard, and they also allow a lot more assisted buckets. They force very few turnovers. Michigan should be able to run their offense against State; they'll have to hit their share of well-contested shots.

Keep it close on the boards. Tillman, Bingham, and Kithier are all a handful on the offensive glass, and MSU usually has two of those three on the court at once. State doesn't need to devote many bodies to crashing the boards to get second chances, so the pressure is largely on Jon Teske, Brandon Johns, and Colin Castleton (plus some probable spot minutes from Austin Davis) to stay disciplined and box out. Castleton, in particular, has had trouble with stronger rebounders; if he's having trouble Michigan may have to try Franz Wagner at the four when Johns needs a break and see if they can create an advantage with shooting.

Contain Winston. An obvious one, sure, but it's no secret that MSU is heavily reliant on Winston. In theory, Michigan's drop coverage should work to their benefit; that's going to force Winston into hitting jumpers on the move, which he hasn't done well this season, and prevents him from getting all the way to the hoop, where he's a solid finisher. It helps that there isn't a lethal shooter like McQuaid out there who can hit triples on the move; the Wolverines should be able to send a little more help at Winston than they could last season.

Attack Winston. With guarantee games removed, MSU scores 1.02 points per possession with Winston on the court, per Hoop Lens. That drops to a hideous 0.79 PPP when he's not, and their two-point defense also gets ten percentage points worse. Winston has been in foul trouble a fair amount when MSU has faced better teams: four in 25 minutes against Illinois, four in 25 minutes against Virginia Tech, three in 28 minutes against Seton Hall, four in 32 minutes against Kentucky. Zavier Simpson should be in attack mode from the outset, because his life gets a whole lot easier if his matchup goes from Winston to Loyer.

THE SECTION WHERE I PREDICT THE SAME THING KENPOM DOES

Conference road games at Breslin against a strong interior defense where you are missing your upperclassman best shooter are extremely tough-er.

If we can be hot throughout from 3pt land, MSU is going down.

Fees like Cassius is gonna have a big game.

Winston will not get into foul trouble at home against Michigan. The whistles on him will be swallowed.

Bingham is the biggest wuss.  I officiated a game with him 2 years ago in high school and he was whining at me the whole game, because the other team's tallest player (who was 6'2") had his hand on him in the post.  I could only think that he has a rude awakening coming, because Big Ten post players will have more than one hand on him in the post.