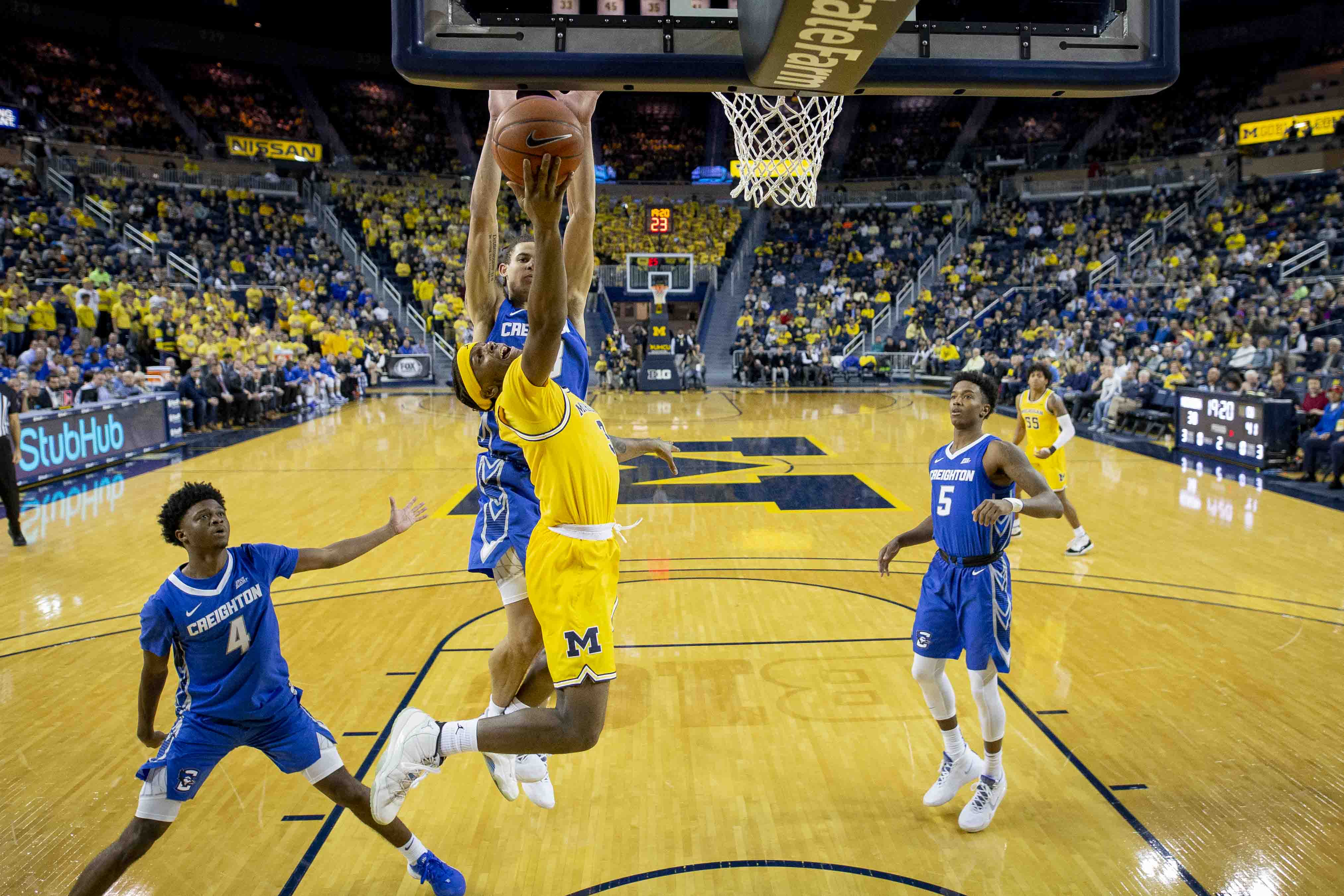 They're just getting started.

That's what I can't shake in the aftermath of the first signature win of the nascent Juwan Howard era. Michigan may look at times like a team getting used to a new coach, but it hasn't looked like that coach himself is new to this at all. After Creighton took a 41-38 lead into halftime against the Wolverines, Howard's squad adjusted on both ends, came out of the tunnel with renewed energy, and ran the Bluejays off the court.

Encouraging signs abound for both the short and long term. Isaiah Livers scored a career-high 22 points on 8-of-12 shooting, rising up for jumper after jumper, flying down the court for fast break lobs, and not sacrificing the parts of his game that made him a great role player—he hit the deck following his own miss to come up with the ball amidst three Creighton players to set up a critical Brandon Johns layup down the stretch.

I was proven very wrong about the three-guard lineups featuring Zavier Simpson, Eli Brooks, and David DeJulius, all of whom played well while often sharing the court. Simpson worked his way to the basket at will, scoring 17 and dishing out nine assists; he also shut down Bluejays star Ty-Shon Alexander for large portions of the second half. Brooks had four assists himself, playing his usual strong defense and holding the offense steady when Simpson sat with a third foul. DeJulius looked more comfortable in an off-ball role than before, scoring nine points and repeatedly using the threat of his outside shot to open a lane to the basket.

Both teams came out of the gates moving quickly, but against a Creighton squad that needed to run to generate good looks, Michigan found a way to choke the life out of their fast break. The Bluejays have traditionally pushed the pace above 70 possessions under Greg McDermott and created much of their scoring in transition; this was a 64-possession game in which Creighton was credited with four fast break points. By only committing 11 turnovers, picking their spots to run, and getting back on defense, the Wolverines were able to control the pace of play.

They were also able to dictate where the game was played on both ends. Dropping Jon Teske into the paint against pick-and-rolls forced Creighton into a lot of midrange jumpers; when they weren't following up their misses, which was a problem particularly in the first half, these possessions were usually empty. The Bluejays attempted 25 two-point shots away from the basket; they made six.

Teske also proved critical in taking over the game on offense. He scored 12 of his 17 points in the second half by using a variety of ways to finish off the pick-and-roll—posting up after the initial action, bulling his way to the hoop, or even hitting a soft runner off the short roll. When he was done doing his offensive rampage, Creighton was cooked.

Not everything was perfect, of course; it's still the second game of the season. Adrien Nunez again struggled on defense after getting the start. Foul trouble wasn't the issue this time; he played just 11 minutes because he couldn't stay in front of his man. Colin Castleton and Brandon Johns had quiet games despite working with major size advantages. A Creighton squad working with one true big man won the offensive rebounding battle 18-4.

Those are fixable issues, however. Meanwhile, Michigan is getting everything they'd hoped for and then some from guys like Livers and Brooks, the squad is quickly establishing an identity as a tough defensive squad that can run, and Howard is pushing all the right buttons. We'll see how this win against a banged-up Creighton team holds up as a resumé-builder come March, but we don't need to wait nearly that long to feel great about it. This is exactly what you'd hope to see from a team under a first-year head coach.

[Hit THE JUMP for the box score.] 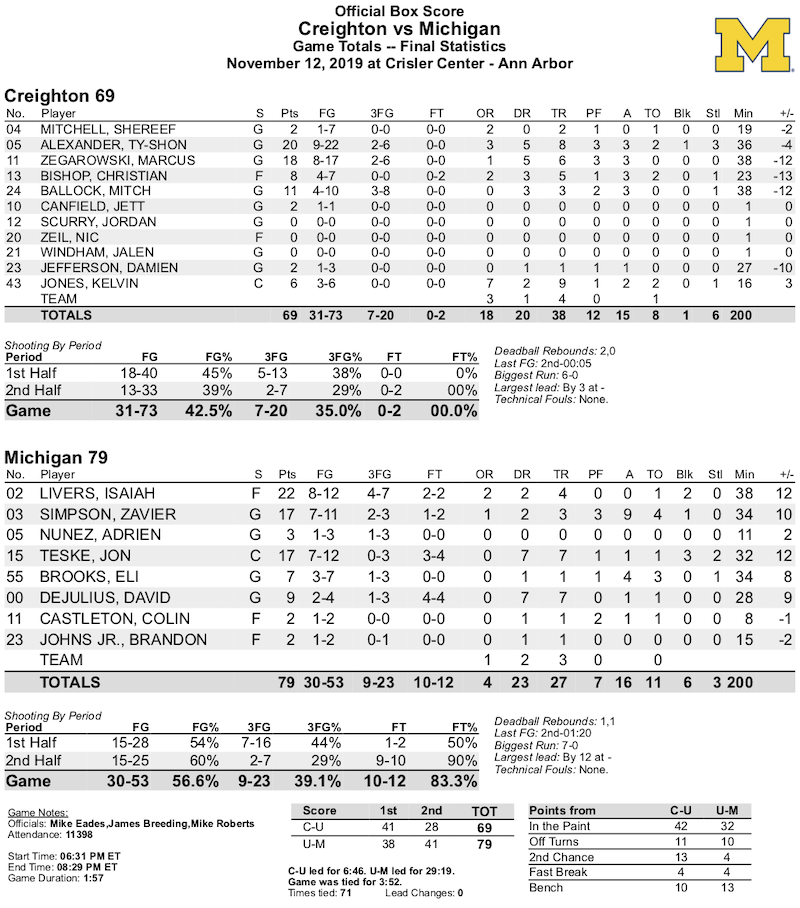 Port Bàn Holiday Park
వైయస్‌ఆర్‌సీపీలో చేరిన క‌ర‌ణం బ‌ల‌రాం…
Everybody wants me, so when do I self…
10 Benefits of why you should hire th…
The 5 Most Popular Blog Posts of 2019…

Did Michigan get better from game one to game two?  That is a big YES!!!  I like what I am seeing on offense and defense was better the second half.   Keep it going Coach!!!!

Are you suggesting we have a decided schematic advantage with Howard-Martelli? Howard did spend a lot of years around smart people in Miami.

Not sure how being up 5 with a little over 3 minutes to go qualifies as "ran the Bluejays off the court". This game was dicey until late.

Still, Livers looks quicker than last year, X probed, drove and dished as well as any time last year (AND HIT 2 THREES!), Dejulius is becoming more patient but with timely aggressiveness and Big Sleep will be a big advantage down low in nearly every game we play. Agree with the Nunez benching. No D, no PT. And not a bad crowd for a freezing night. Good game, Coach!

Yeah the Nunez thing is still a bit of a head scratcher for me. Maybe coach sees something in practice he’s hoping translates, maybe it’s a Duncan Robinson situation where someone else looks better coming off the bench (Johns I guess?). This was a good game for most of the rest of the team tho. Spread it around nicely. Just want to see some more rebounding! Love what we are seeing tho.

Sure Creighton were within five later in second half like someone mentioned above who had issue with the run off court comment, but it never felt for a moment like we were gonna lose.  And Creighton is no slouch, and I'm picking Creighton as a sleeper in the pool. This was a great win.

Teske has vastly improved...and primarily it's due to Howard teaching , over just being older.   We gotta land another big man like Dickinson because right now I can't imagine our team without Teske.

Same goes for Simpson, but DeJulius showed me ALOT tonight....scrappy and a high effort rebounder....it will assauge things next year without Simpson...and Brooks..my goodness, I hope it will now put to rest all the Brooks naysayers here, because he is a very good player.

Castleton still has alot of potential, and we need him to get there. Need another big presence.

I still stand by what I said about Johns that his performance this year will make that needed difference.

Livers is a star. Better stroke than even Nunez.  Nunez struggled on D but he is good on O.

I was very enthused by the grit and resolve tonight. Howard did not look out of place, and I love the way they responded in the second half.... They were better than I was expecting for a first year coach.

We seemed to be on the verge of running them off the court for most of the second half but kept it close with some untimely turnovers and defensive errors. Ultimately we did get to mostly cruise the last few minutes to a double digit victory.

Juwan addressed this in his interview after the game but even as the defense tightened in the 2nd half there were some unforced mental errors where guys sagged too far off or got caught in no mans land coming off switches. These lead to some open looks and easy baskets that I don't think will be there later in the season.

The halftime adjustments were the best part of that game looking ahead.

It’s too bad Nuñez is struggling so badly.  His shooting stroke is so aesthetically pleasing.

As Duncan Robinson found out, no matter how sweet your shot is, your minutes are going to get reduced until you learn how to defend. Opponents are going to target you.

Very impressive victory against a very well coached Creighton team. Z and Teske are the guts and glue, and Livers is showing that he can be a go-to scorer. All of which bodes well for the season especially once Wagner returns. GO BLUE!!

Underrated stat of the night:  David DeJulius with 7 defensive rebounds.

Yeah he was trying really hard out there. One time he tried to rip one out of Livers’ hands and it promptly fell right to a Creighton player who then scored.

Good win should age well throughout the season.

I’m hoping to win the next three and then play with house money against the winner of the UNC game. Get a second or third major conference win and win all the games we should we should be fine. If we do more than that great.

The team is playing hard and it’s great.

Damn this team is fun to watch play.  I mean they look like they're having a blast on the court and genuinely like playing with each other and for coach Howard.

Gonna be a fun year however it turns out.

A little soft on the glass, that will have to pick up against the MSUs of the world, but a huge improvement from game one to two. Livers looks like a damn All-American out there. Everyone played within themselves tonight, add in Wagner and Juwan has something brewing in AA.

It felt the rebounding tonight was a lot of plain bad luck. Seemed like every contest rebound inevitably went to a Creighton guy after the initial contact. We looked in decent position most of the time and the ball just didn't bounce our way a lot.

Things that jump out at me from the box score:

1) The +/- confirms that X/Brooks/DDJ/Livers/Teske was by far UM's best lineup on the court;

2) Alexander/Bullock only combined for 6 points in the 2nd half after scoring 25 in the 1st;

3) Michigan was able to score 41 points in the second half despite only making 2 threes;

4) DDJ committing only 1 TO in 28 minutes on the court is impressive (as were his Walton-esque rebounds);

4) This game would have been a blowout had UM not given up so many 2nd-chance points; and

Z's defense on Alexander in the 2nd half was amazing.  Alexander looked like Michael Jordan in the first half, but was demoralized facing Simpson and company by the end of the game.

Looks like last year's Binghamton game: Iggy with 21, Poole with 18, and Livers with 17.  This game was much more satisfying, though. :)

Great second half effort, which was good to see after the first game experience. The team did a great job of sharing the ball on offense and really tightened the screws on defense in the second half. Teske was a monster down the stretch.

i think this team is well suited for Howard’s style and pace of play.