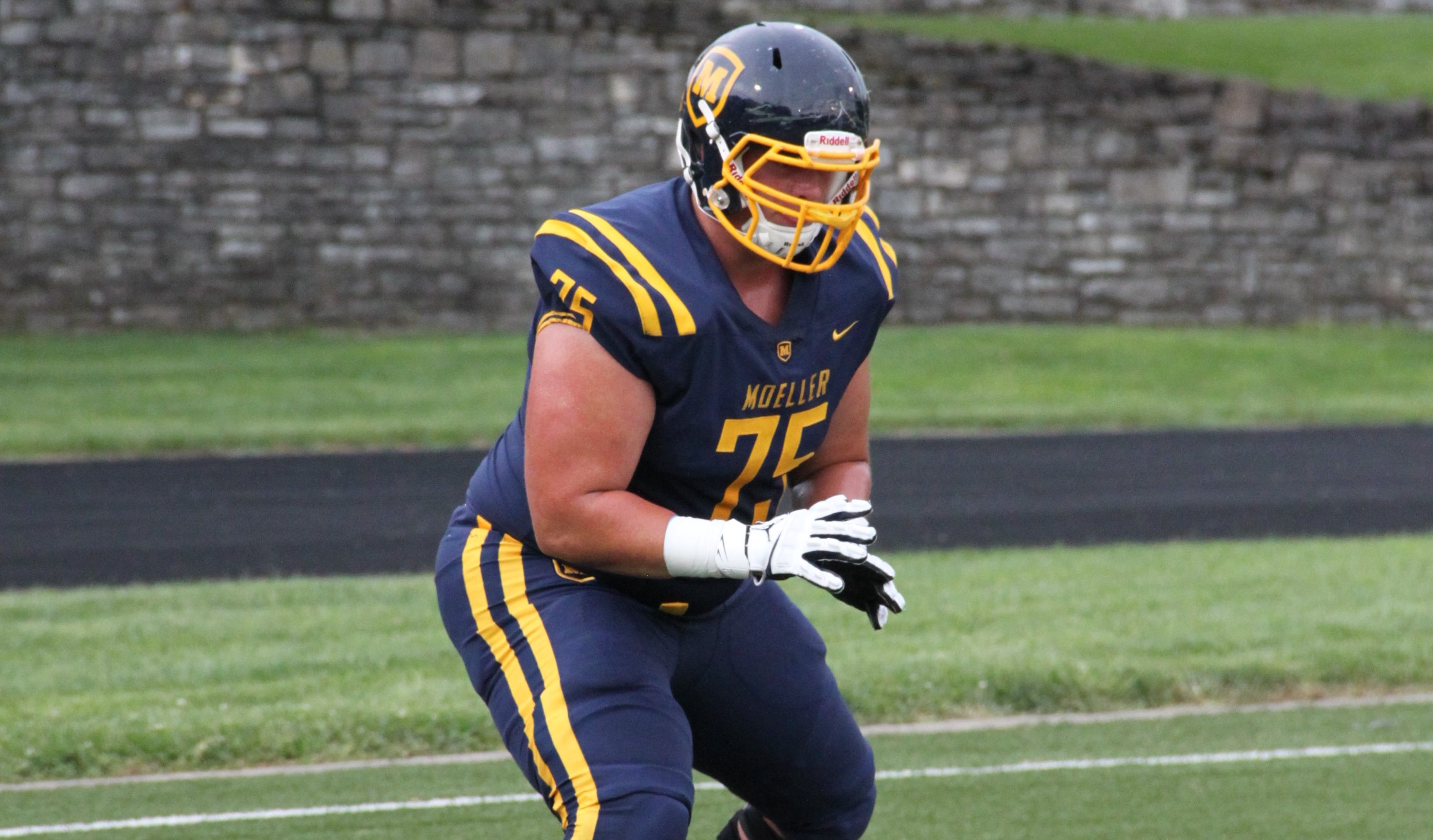 Most of the scouting for Carpenter could be inserted in the Rumler post without changing anything. For example:

Wide-bodied, thickly-built interior prospect. Average length. Strength, toughness, and experience playing high-level competition are all pluses. Powerful and knocks defenders off balance with initial contact. … Dominant in the run game. … mean streak … can still work on footwork there. Not the prettiest prospect, not the best tester, but a kid who controlled the guy across from him consistently on film.

"…overall strength is phenomenal … already strong enough to play at the college level… force, power and brute strength … football IQ is incredibly high … basically raised as an offensive lineman. His understanding of all positions is off the charts. … brings a knowledge of the offensive line that’s rare in kids his age and he has power that’s even more unique. …working on his body and his agility so he can play faster and be more athletic."

The "raised as an OL" bit is comes from his grandfather, who spent many years as a CFL OL coach.

[After THE JUMP: more scouting that's about a mean tough interior guard guy]

"…big dude. … downhill bruiser. … big-framed kid who can punch with the best of them. …road grader…  wide frame making him difficult for guys to get around. … choppy enough with his feet to stay engaged on the interior too. I don’t think he’s athletic enough to kick out and play tackle … can blow open some holes … might not have the sky-high potential that some might but his floor is really high"

…physical, head-knocking, road grader … far more advanced as a run-blocker than he is as a pass-protector … smart enough to play center, but big and strong enough to play guard. … not a body beautiful, long, lean, athletic offensive lineman … carrying too much weight … not the quickest guy in the world

There's even a take similar to Adam's "Nolan Rumler has crazy grip strength":

"… finisher … likes putting people on the ground. … He locks onto guys and he isn’t letting go. … [uses] powerful hands to hold a guy and keep him under control. … does a great job of keeping his shoulders and hips square as he approaches a linebacker. … not just blocking to block, he’s trying to crush the defender. …clearly a guard"

Adam did not note Carpenter's grip strength specifically but did come away with a positive impression, as long as you're able to project the guy to guard. In our FBO Carpenter played left tackle against four-star Stanford commit (and Michigan decommit) Stephen Herron:

…requisite size, strength, nastiness, and length to play on the interior. … shows short-area quickness and an ability to get to the second level …. pass protection was a journey, and the reps he won were because he’s strong, not because his footwork was doing him any favors; … some conditioning work is in the cards. … came out of the game for a bit for a breather.

…looks, moves, and hits like a future guard. … a nice job timing his punches and steps for maximum impact and consistently uses his hands to good effect. … strength seems close to college-ready … as an across-the-board three-star, Carpenter is underrated.

"… looks like a college offensive guard already. He has the size, the stance, the demeanor, etc. … good first step, takes good angles on his zone blocks, and gets big while climbing to the second level, which makes it really tough for linebackers. Once he locks onto second-level players, they will have a very tough time getting disengaged …a little heavy-footed. … big body who’s relatively polished … not an elite athlete"

Other takes include "mauler and a masher…tough-as-nails and he’s smart as can be"; "… very intelligent football player … well schooled in technique". Rumler is less clucked at for his mobility but in all other ways that's him.

There is one major difference between Carpenter and Rumler's high school careers: Carpenter played a lot of center. This is unusual anywhere outside of IMG, but the most extensive tape Carpenter put out from his senior year is all at C. There are a couple plays at the tail end of his tape that jump out. OL film is often a frustrating exercise in watching the D-I recruit sit on future accountants, a skill that has virtually no bearing on college success. What pops out to me are the plays starting at 3:16 here:

The ability to read the defense and pull off a zone block to pick up a charging linebacker means more than every time an OL jumps on a downed opponent combined, and Warinner clearly prioritized these things when he went after Carpenter and Stewart, both low-ranked OL with a bunch of experience and a high football IQ.

The previous year Carpenter was the right guard, which is also illuminating: he's flexible enough, and smart enough, to play across the interior. But even on the high school level it didn't seem like a great idea to expose him to edge rushes. Moeller did try. As mentioned, when David went down to film him in mid-September he was the left tackle. A midseason move to C is indicative.

This is in part because Carpenter was, by his own admission, playing too heavy as a junior…

“Last year I played between 325-330 and I’m down to 306 now. We have a new training program that has allowed me to slim down, but continue to increase my strength.”

…and he's gone some ways towards fixing that. But, yeah, the way Carpenter busts out is that he's too easy to run around in pass protection, even as an interior OL.

You may notice some similarities between the three guys just profiled. They're all massively experienced; they all get projected to center because of their smarts. Stewart is more of a mobile artillery piece than a mauler in the trenches, so you see the true desire Warinner has for his interior guys: Wonderlic scores. And Carpenter reciprocates this interest:

"I would venture to say that there is no other program in the country that has as much experience and knowledge for one position group as Michigan does with Coach Warinner, Coach Prince, Coach Blaney, and Coach Kugler."

The light at the end of the OL tunnel is arriving imminently.

Where do I put this? Harbaugh being Harbaugh:

“He asked me what my 3 favorite saints were and he told me his favorites."

Why Mike Onwenu? Carpenter isn't 350* pounds but is the same variety of jumbo masher at guard that Onwenu is. Mobility is a question; Onwenu has largely defied his immense size to become a fine pass protector under Warinner. But Onwenu was a a top 100 kid on the composite because of that. Carpenter's ranking indicates that he's more of a question mark in this department.

Stephen Spanellis—a smart three-star guy who came in around 330 and had a bit of a reputation as a plodder—is the tightest fit just in terms of recruiting profile, but I try to pick guys who have seen the field recently for these comparisons and Spanellis has been blocked so far.

Variance: Moderate-minus. There's a clear failure mode for Carpenter but there's just the one, which is better than most OL prospects. He's already college size and strength and has indicated he's got the mental chops as well as any high school kid can. Mobility will make or break him.

Ceiling: Moderate-plus. Probably doesn't have the physical traits to be a high end NFL draft pick but seems like the kind of guy who could make it there by maximizing his potential.

General Excitement Level: High. Carpenter was under strong consideration for sleeper of the year; I went with Charles Thomas over him mostly because Carpenter is in a six-OL class and Thomas is in a one-ILB class. Like Rumler he feels like more than one lottery ticket. Mike Farrell and Helmholdt both called him out as a guy who Rivals could easily have put a fourth star on, FWIW.

Projection: Is OL, redshirt, has to pass his classmates and one or two upperclassmen to start next year. More likely to emerge as an upperclassman after Hongiford and Filiaga depart. Between Stewart, Rumler, and Carpenter Michigan has three potential Cs on the interior line, and that's a great spot to be in.

TerraVita CBD Review Copy
Royal Palace Rugs
A Wonderful Winter Ahead At One Snowm…
Recruiter of the Month: Anthony Dare
87 Ideas to Start a Side Hustle Busin…

Reminds me of those big Wisconsin and Arkansas linemen of recent memory.