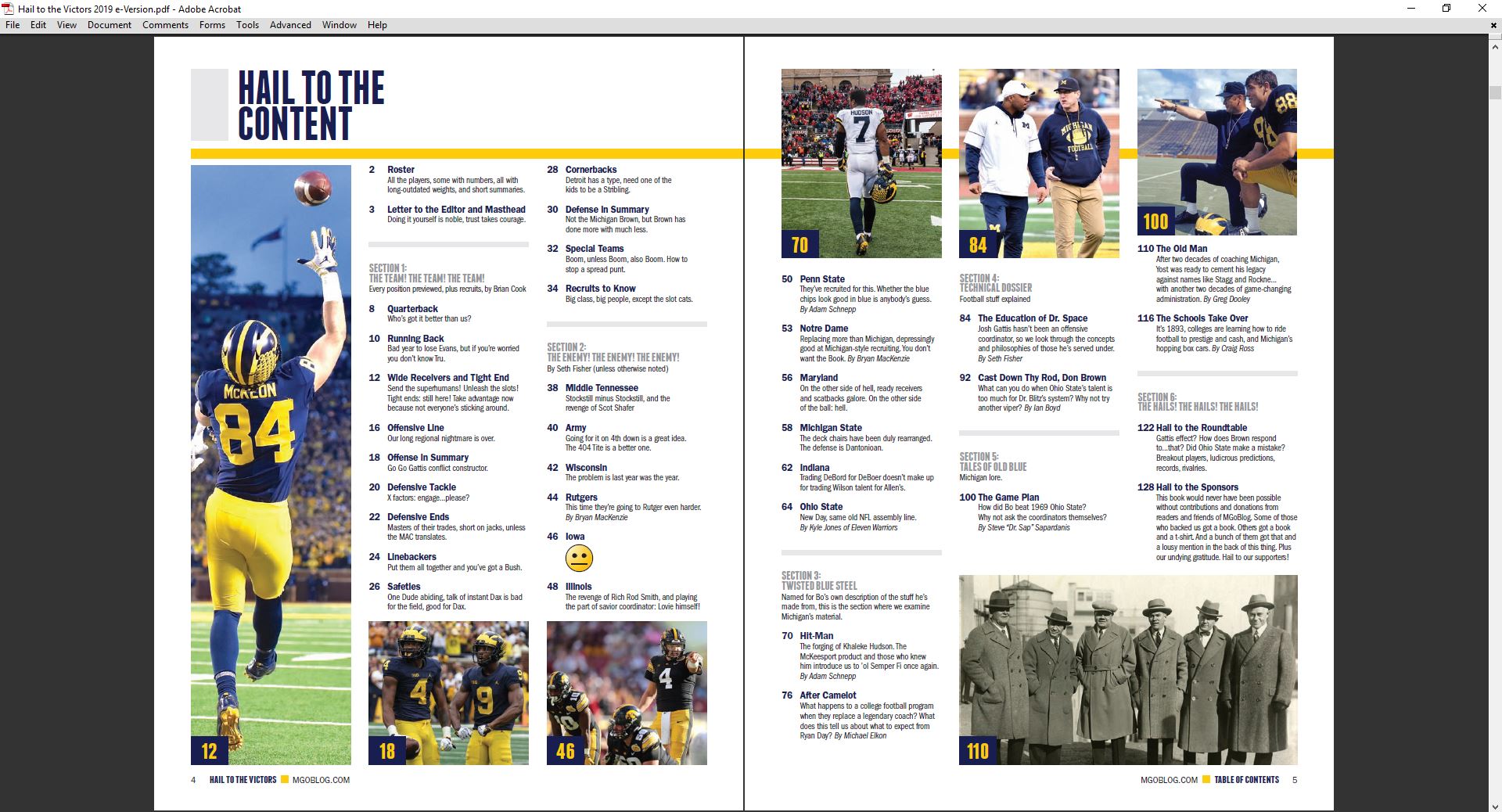 You could be reading this tonight. Also if you click on the headers in the table of contents you'll go right to those articles. Neat huh?

Larry's the guy in your office who knows things about Michigan. When people want to know what the Gattis offense is going to look like, or how Brown might respond to the end of last season, or what the situation is at safety, or what's with Iowa having four-stars and early NFL draft entries, or how did Bo and his staff beat Woody in '69, they go to Larry. Where does Larry get it? Larry reads Hail to the Victors.

Wanna be Larry? Like...by tonight??? Well, you could be reading your very own HAIL TO THE VICTORS 2019,this very evening! Here's how:

Every backer from THE BOOK level and up gets a DRM-free digital (PDF) version of the book with their orders (if you buy a book from our store it doesn't come with the digital copy).

NOTE TO CURRENT BACKERS: If you got a new credit card recently, you might want to go and make sure your payment method is up to date.

STEP 2: Fill out your Kickstarter Survey (and Shirt Order Form) when I send them tonight. 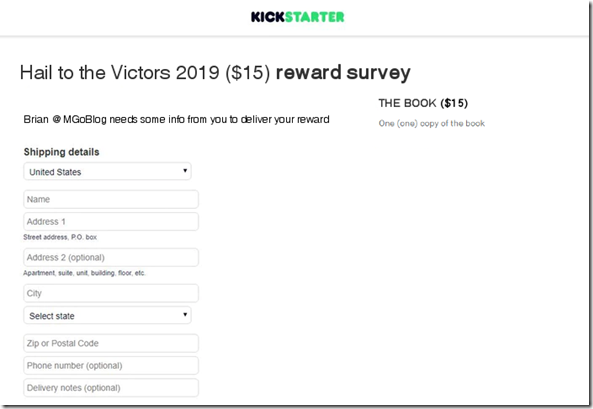 Shortly after the Kickstarter ends tonight I'll be sending out SURVEYS to the email you used for Kickstarter.

Because of our late start it is CRUCIAL that you get those filled out ASAP, because as soon as the books are printed (in about a week from now) we want to start mailing them. This happens in bulk, so if your address isn't in when I send the first bulk, your book(s) will be delayed significantly.

Things in the surveys:

EVERYBODY HAS TO FILL OUT THEIR SURVEYS. We don't keep old addresses (mostly—some are in my inbox from previous exchanges) and we don't get your financial information from Kickstarter. The only people who don't have to fill out surveys are people who fill out a shirt order this year who want their books mailed to the same address. But then Kickstarter will keep hounding you to fill out your Survey anyway so might as well do it.

If you never filled out your 2018 or 2017 surveys or something, don't worry about those unless you didn't get those old books. The 2019 survey, which goes out tonight, is the only thing that matters.

EMAIL FUNCTIONALITY TEST: If you're already a backer, you got an email from me last night with a bunch of dates. If you didn't get that email you have today to figure out what inbox/spam folder it went to, because the survey is going to come in the same box.

STEP 3: I am totally serious about the surveys.

So serious that you get your digital edition link from taking them.

THE TEAM THE TEAM THE TEAM: Brian wrote reviews of every position, plus special teams, plus unit summaries (except I wrote the D one), plus the recruits we didn't get to because they're probably headed for a redshirt.

THE ENEMY THE ENEMY THE ENEMY: Previews of every opponent on the schedule, most by me, but Bryan MacKenzie demanded Rutgers as part of the price for making him do Notre Dame, and Adam covered Penn State, and we got the X's and O's guy of Eleven Warriors, Kyle Jones, to do Ohio State since none of us wanted to touch that.

TWISTED BLUE STEEL: Adam Schnepp interviewed Khaleke Hudson and his family and coaches to get a sense of the man forged by a West Pennsylvanian steel town. And Michael Elkon (SBNation/Braves & Birds) went over the history of programs replacing a legendary coach.

TECHNICAL DOSSIER: I went through the concepts that Josh Gattis has been exposed to and how he's been adapting them to Michigan's offense. Ian Boyd answers the question of what the hell happened to us at the end of last year, and how they can fix it.

TALES FROM OLD BLUE: Dr. Sap spoke to Bo's coordinators for an in-depth look at the gameplan for The Game in 1969, and how it came off. Greg Dooley (MVictors) looked at the later years of Yost and how he stacked up with the other legends of his era. And Craig Ross's article on 1893 is fascinating, from the economics that made 100 colleges start football programs in a few short years, to how Michigan went from an 0-3 proto-conference start to wrecking people so bad their rivals refused to play them.

ROUNDTABLE: We are always right.

The fastest way to get your print copy/copies of the book is to come by one of our pickup events. You'll get to choose a pickup option in your Kickstarter survey. If you need to change that later, email me: seth at this site dot com. We have two pickup events planned this year for the day the first shipment of books arrive.

If you're not picking up, we'll mail all of your books to one location (sorry, we can't split those—it just becomes a logistical nightmare). Put your address in the Survey. If you answer your surveys before June 28 you'll probably be in the first group to go out. Expect them to arrive through July, with the bulk of them +/- a few days from July 18.

Every year the mail loses some, or damages some. If you got your survey to me before June 28, you're in the United States, and it's already August 1, email me. If your survey comes in after June 28, bother me after August 10.

The HTTV 2019 pre-sale on our site will go up in the next few days. Those books will be in Ann Arbor probably after the July 4 holiday, and then start going out from then. Note: your shipping will cost more if you order through our store.

We'll also have them on the shelves in select stores:

If you have a favored book store or sports-themed retail outlet and can convince them to carry it, have them email me: seth at this site dot com. 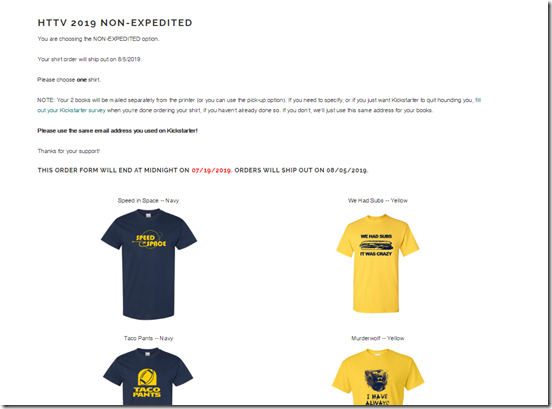 EXPEDITED: This is if you want the Speed In Space shirt faster, and will only remain open until June 27, 11:59 p.m. After that we'll take the orders we have, print them, and ship out those orders on 7/15.

NON-EXPEDITED: If you want a different shirt, or you're too late for the first cart, or you just like things slow (e.g. if you're moving or out of town this summer), take the NON-EXPEDITED link. The other shirt options this year are We Had Subs (brought back because, obviously), Murderwolf, Tacopants, and Worst State Ever. This cart doesn't close until July 19th, and orders will ship out on 8/5.

Hemp Land USA Review
What is Conversion Tracking? How to S…
Top (IAS) Civil Services Interview Qu…
A Comparison of the Environmental Imp…
CBD 2020: What to Expect + Our Top Pr…

Question: Will this year’s book be available for on the kindle?

Yes, that's my next project. Probably in a week or two.

You mention pre-sale of (presumably) hard copies on MGoBlog store -- when will the PDF be available for purchase through the site?

How can I back the Kickstarter without getting a hardcopy book?  The PDF is fine for me (better, actually), but I'd still like to support the work that went into it!

There's an option for "No Reward." Anyone over $10 on that I'll send a digital link.

So, to make sure I'm understanding this correctly, if I choose the "No Reward" option for $10 I can get the digital copy tonight?

Might be tomorrow because I wasn't planning on wrangling up the No Reward folk until then. I wasn't advertising this--it was just a nice thing I was going to do. So... 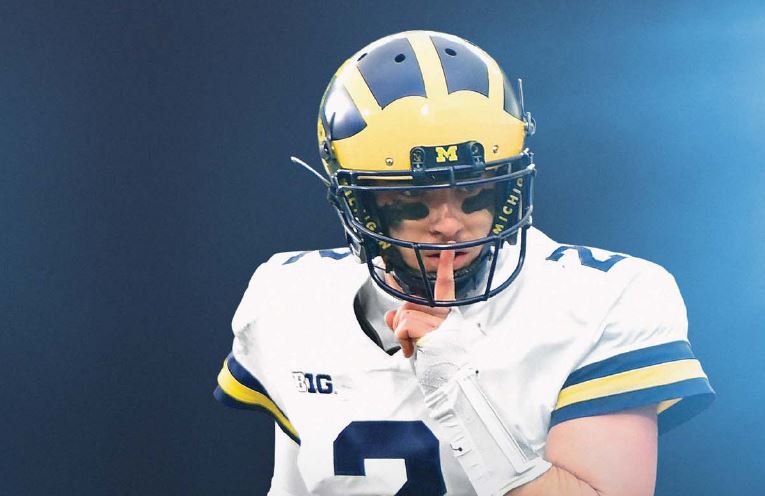 Ah, sorry Seth! Not trying to take advantage of you or anything. Thanks for all of the hard work you and the MGoStaff do to create content like HTTV for us.

If we live withing stumbling distance of Wolverine State Brewery were planning on the pick-up option, do we just donate min $18 instead of $15?  I'm confused b/c Step 1:  Start Kicking has the required shipping field, before Step2:  The survey the survey the survey (allegedly) has the p/u options.

How did you get the beans above the frank

I still have to pay for shipping. I get a few boxes rush-shipped to me for this purpose. The rest of the books either go to a mail house for mailing or on a palette to UGP's Metty Drive warehouse, and that won't take place for a few more days.

Thanks!  I wasn't going to squabble over $3, I was just confused as the order of operations.

Any chance the duality of Sports will be available? That t-shirt is my go-to and need a new one

No but maybe we'll bring that one back next year because mine is only going to last so much longer as well. The hard part about that one is the guy in the euphoria gif that sort of inspired the euphoria guy on the shirt wanted to claim rights and we had to negotiate with him (basically said "If we can't do this for free then someone else will be the guy on this iconic shirt"). But if we bring the shirt back it means asking again.

Thank you! Agree with all parties, like the zeitgeist so think a substitute will get to the same place.

Welp. There goes my evening

UPDATED: Got the email link to the pdf about 10 minutes after competing the survey - patience is a virtue...

Seth - thanks for coordinating this.  I got and completed my survey.  As I was doing the survey I saw the electronic link but didn't copy it.  Is there another message coming with the link (waited a few minutes before asking) or do I need to go back into my survey answers to get the link?

I missed the 5pm mark because I forgot you all were in EST and not CST. Wahhhh. Can you help me out?