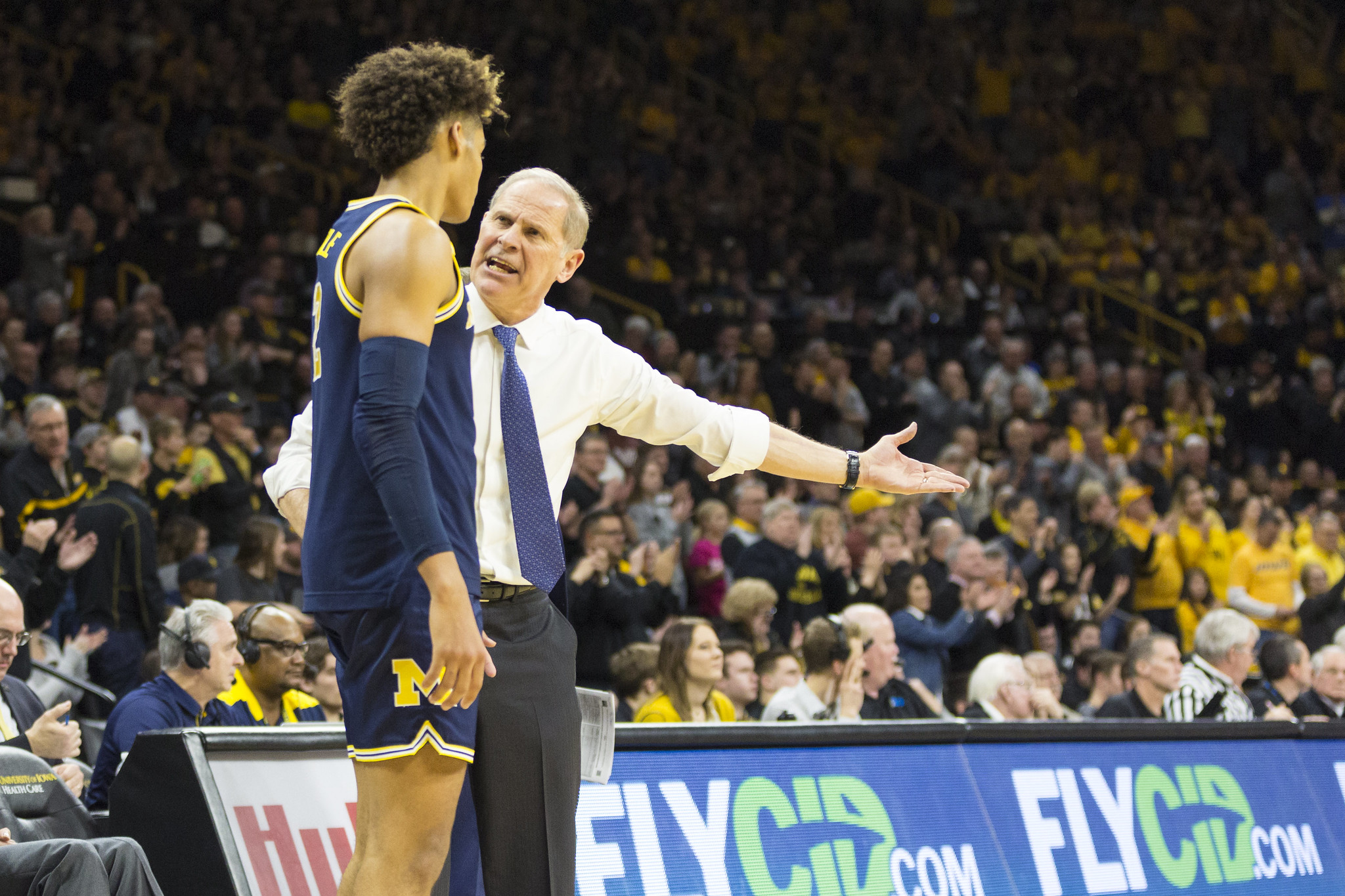 Well, that's that. I was going to write the exit post but I guess there's an incredibly faint possibility that Poole does an about-face and is able to give the money to charity or whatever:

ANN ARBOR - For $20, Jordan Poole will provide you with a personalized video shoutout.

Because of this service, it does not seem likely he will return to the Michigan basketball team for his junior season.

Poole, who averaged 12.8 points per game as the starting shooting guard last season, announced on April 9 that he would declare for the NBA draft. Meeting with local reporters the following week, he said he had not made up his mind about whether he would keep his name in the draft or return to school.

But his profile on the website Cameo.com would appear to jeopardize his NCAA eligibility. Like many of the celebrities on the site, Poole is offering video shoutouts for people celebrating birthdays, weddings, proms, or any other special event. He has posted two videos in which he declares just that.

Realistically that closes the door the last inch. Poole's last inadvisable step-back three at Michigan is entering the draft. I take no pleasure in reporting this, but in the end Poole overdosed on swag.

[After THE JUMP: in praise of slots, small hockey schools should pound sand.]

Projecting wide receivers. Bill Connelly's latest is more about projecting WRs to the pros but it has a few interesting bits for those concerned with college football. One is more evidence that redzone fades are bad: 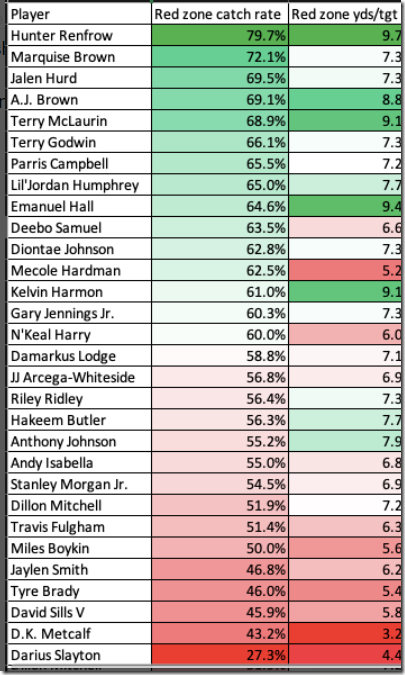 The saying goes you need a nice, big-bodied target to score in the red zone. This list could not push back harder on that truism. Metcalf, the biggest of big-bodied receivers, had the second-worst red zone catch rate and the worst per-target average of the group. David Sills V, another big body, scored an absurd number of touchdowns in college (33 in 2017-18) but required a metric ton of targets to pull it off. Notre Dame’s 6’4 Miles Boykin was also on the low end of the catch rate equation here.

Meanwhile, Renfrow was by far the most efficient here, proving mesh does what we think fade routes do in the red zone. Hollywood Brown, the second-best of the bunch from a catch rate perspective, is 5’10 as well. A.J. Brown and Terry McLaurin are 6’0, Terry Godwin 5’11.

In fact, the only big body near the top of this list is that of Tennessee RB-turned-Baylor WR Jalen Hurd.

Another reason that getting some Dileo-with-rocket-boots slots in the program was a good idea.

Lotta agar around here. I apologize for the previous biology joke.

It turns out running a program is actually very simple: pic.twitter.com/XV9qKGyRcq

It was a bad joke. We need to change our joke culture at MGoBlog. In the future, all jokes will be good and/or be about something other than agar.

Conference single-plays. This is close to ideal:

In his defense he probably just thought he was recruiting? The only thing surprising about this is that it doesn't happen more often:

Florida football assistant director of player personnel Otis Yelverton has been placed on leave by the school following his arrest for aggravated cyberstalking on Monday. He's facing a third-degree felony, according to court records.

Aggravated cyber-stalking is his job!

I love this man. Pointing to the sky to acknowledge the living is only appropriate if it's Rasheed Wallace:

Terry Stotts is my new best friend. Someone tell him so he can come over and we can play FIFA together.

Another shiny 2004 for hockey. Another high-end unspeakably young person:

4.75⭐️Frank Nazar to Michigan. 2004 is nearly impossible to stop 1v1. Has speed, skill, vision & a lethal shot. Quick in transition & has the puck a lot. Changes direction quickly. Can do anything he wants with the puck & all at top speed. Elite talent.
https://t.co/CVQ7GDRLqf https://t.co/C8bAmjCj1Z

The immediate question is as always "will this person actually get to campus?" This far out the answer is always "maybe." Nazar's quote to MI Hockey is encouraging as these things go:

“My whole life, I have always been a Michigan fan and I love the state we live in,” Nazar told MiHockey. “It is amazing how I can stay in the same state, get a great education and play the sport I love.”

The key fork in the road is next year, when he'll be drafted by the OHL and (presumably) offered an NTDP spot.

Nazar is Michigan's fifth 2004 birthdate commit, a group that includes two guys projected as top ten WHL draft picks (Connor Levis and Mats Lindgren), a D potentially in the Quinn Hughes mold (Hunter Brzustewicz), and a couple of forwards (Seamus Casey and Nazar) with an argument as the top forwards in their year. I would like to hit fast forward on the hockey program please.

Naturally, then. Schools that can't recruit like Michigan continue their attempt to strangle high-end talent out of college hockey with anti-player initiatives. This one is what's bound to be an ineffectual attempt to prevent early recruiting:

The NCAA D1 Council has approved rule changes that will alter the recruiting timeline for Division 1 men’s hockey prospects.

It comes “with the goal of slowing down and improving the recruiting experience,” per a release from College Hockey, Inc.

Instead of talking with the prospects directly they'll talk to their coaches, parents, and handlers, and the verbal offer prohibition will be about as effective as the one in basketball—which only John Beilein pays attention to. But if this actually worked, think about the results: no hockey player could be offered a scholarship until a full year (or two) after they got drafted by major junior.

Michigan should and will comply with the letter of this law while breaking its spirit every damn day.

Meanwhile, they've got a freaking graphic that makes the anti-player thrust of college hockey canon! 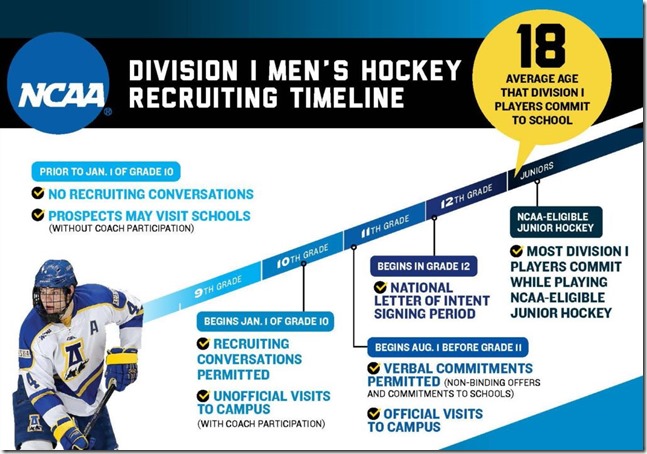 That should read "most Division I players commit after a year or two spent in limbo not taking college classes because Quinnipiac wants to win."

It seems like this is the right decision for everyone.  It's a shame he never became fully weaponized at Michigan, but he has a lot of talent and I hope he does well in the pros.

If DJ Wilson and Rashan Gary previously led the list of vaguely disappointing Michigan players to leave early, I think Jordan Poole has either topped that list or created an entirely new category of early departures (since I'm not sure "vague" applies).

But Michigan fans should be forever grateful for The Poole Shot. Thank you, Jordan.

Nothing but the best of luck to the kid, and I hope Ace is ok.

What's up with Ace... something new?

Maybe a Jordan Poole video will brighten his day.

Tough to compare Poole with Gary. Poole resume is much better IMO. Poole has the shot of the year on the way to a national runner up, won a big 10 championship, and beat the rivals at least twice in 2 years. Gary was 0-3 against Ohio State, 0-1 vs Norte Dame, 0-3 in Bowl games and ZERO big 10 championships. Yea, I am much more grateful for Poole than Gary.

I don't get all of this hate thrown Gary's way. The man played injured when he could have easily pulled a Bosa and hung it up for the year. I think Gary wasn't utilized by the staff well. He should have been slid inside to a 3 tech. Our Dline would have been a lot better up the middle. I love Chase, but one of the reasons he was able to be as disruptive as he was was because Gary was constantly taking on double and sometimes triple teams, freeing up Chase to go one on one. Go back a look at the UFRs. Gary did his job really well and he made it a lot easier for the other guys in the front seven. That includes Chase, and Devin Bush.

And since you want to throw out records against rivals, name a Michigan football player who has a winning record against our rivals or in bowl games over the last 20 years.

This just reminds me of how Peppers was mentioned around here after he left for the draft. From everything I have heard, Gary is a good young man and a hell of a hard worker on and off the field.

The rumour in draft circles is Gary is telling NFL teams in interviews he doesn't want to play inside and wants to stay at end.  So there may be a reason Michigan never shifted him inside.

Just more proof that height is not as important for wide receivers as some make it out to be. The smaller, shiftier receivers seem to be more productive in our current landscape. Sure, everyone will take a Calvin Johnson on their team but those guys are very rare.

Been saying this about WRs and TEs for a while.  Everyone got a boner about Zach Gentry being 6'8 but that that only extends his catch radius by maybe a couple inches over another TE and it also doesn't take into account leaping ability (how many times did a CB jump up to break up a jump ball thrown to him?) or arm length.

So the window is a couple inches larger but that doesn't give a college QB much better chance to hit the window.  Speed and shiftiness that will create separation from a defender opens the window by feet.  That's far better, especially for college QBs.

While we're at it, you could say the same thing about CBs. I'm looking at you, David Long.

Look at all the guys, save Randy Moss, to whom Brady has thrown the ball. Give me an Edelman and a Welker any day over a 6'5" guy who can't get open.

I'm still holding out hope that Poole returns.  If he is still projected as a late second rounder, returning to improve his position would make sense.  On the other hand,  his game is extremely limited in college, especially in a Beilein offense (probably unavoidable, not a criticism of Beilein). He needs to be somewhere he has more freedom to showcase his elite offensive skills - and yes that includes step back threes or some other flamboyant drive or shot.  That's what elite offensive players do.  Sometimes they make spectacular shots and sometimes they don't.  And yes, he has elite skills.  I just don't think he had the full opportunity to blossom here.  Unfortunately, many Michigan fans failed to appreciate him here and that's their loss.

Personally, I will continue to be a huge fan of his and be thankful for the opportunity to watch him at Michigan.  I love his swag, his infectious enthusiasm, his love for the game and love for his teammates.  Without Poole, I don't think Michigan makes it past the second round either of the past two years.  I'm betting on him to be successful whatever decision he makes.

It's not happening, man. It's just not. Head over to the UMHoops forum and read some posts by umbob1, DOTMAN, and Dylan (umhoops' proprietor).

You might have misunderstood my post - it's just a slim hope and I have no expectations either way.  But I honestly don't think he's made a decision until he makes it official.  If he decided to return, I guess he would have to give the "shout out" money to charity - to comply with NCAA hypocrisy.

IT'S OFFICIAL! Jordan Poole will be staying in @NBADraft