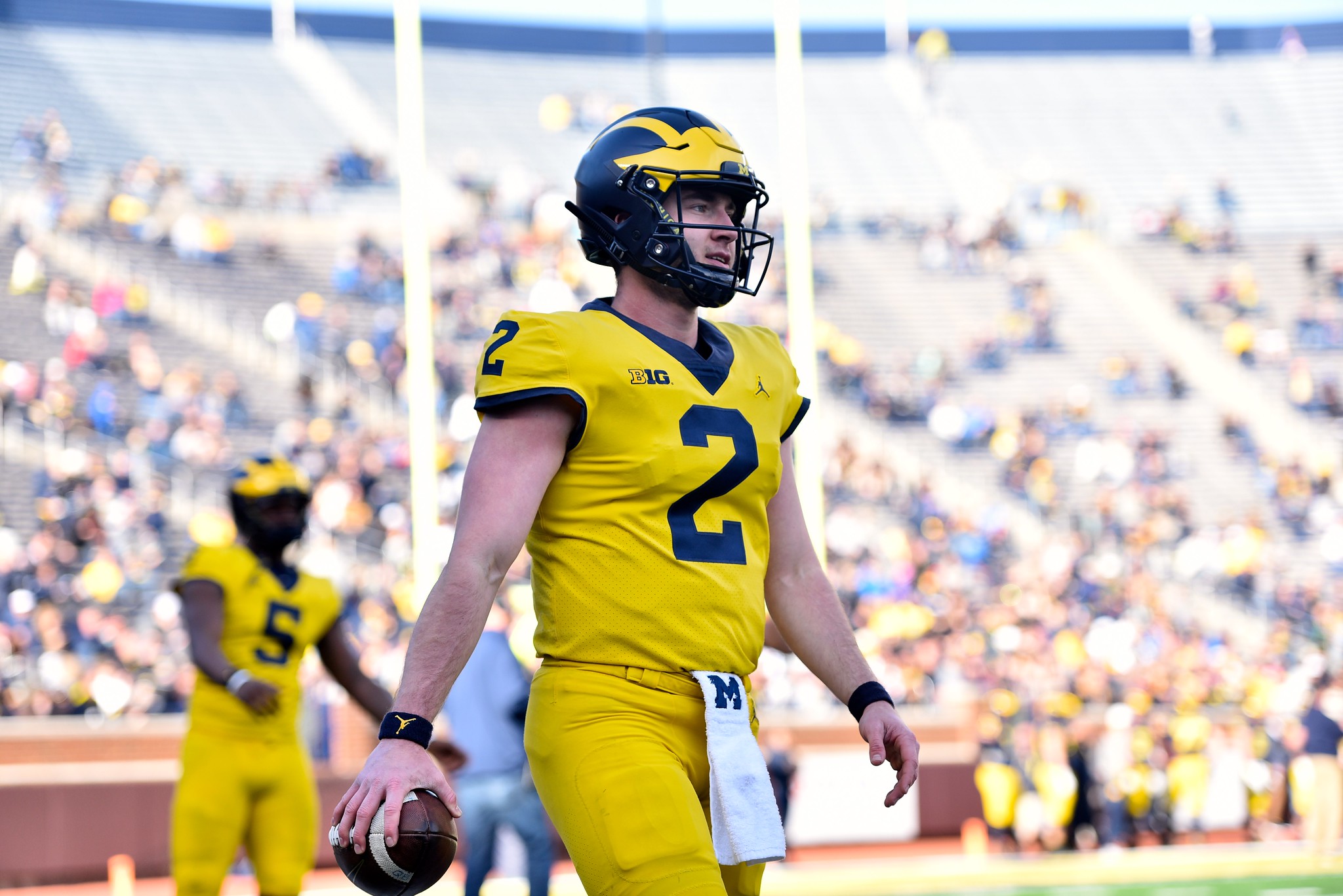 Wilton Speight said something a couple weeks ago after pro day about seeing you with the handcuffs off. Did you feel a little handcuffed?

“Uh, not really. That was the Offense we were running last year and my job is to do that so I tried to be the best in that offense. I love Wilton, he’s awesome. But yeah, just gonna be myself in this offense, too. Each offense, it’s system-driven so go out there and be myself.”

Are they off now?

How similar is this to what you were running at Ole Miss?

“Pretty similar. Ole Miss was a little more Air Raid and pass-driven. I think this is a good mixture of both.”

Has that helped you adjust to it or learn it?

“Uh, yeah, I think just being in the RPO system gives me a little bit of a background and knowledge of what’s going on here.”

“What do I like best about it? All the playmakers around me and all the different ways we can get to wherever we want.”

How different is the offense and how much do you like it?

“It’s night and day. I mean, we’re going to carry over some stuff from last year but as far as the similarities, I think they are very, very few of them. So, it’s going to be fun.”

[After THE JUMP: Patterson on the games that shaped his decision to come back, plus McCaffrey and Milton on the new offense, Ben McDaniels, and growth]

We saw that on the field, that’s why I’m asking.

“Yeah, we’re going to carry over some stuff from last year and also we have some new stuff going in. Just going to rely on our playmakers.”

Last year didn’t end the way you guys wanted it to. What’s the vibe in the locker room right now?

“Our attitude from day to day—we’ve been talking about attitude all spring, just the way you approach something. You’ve got to have a certain drive or certain motivation in the way you approach practice or meetings or workouts or extra work on your own with an attitude, something in the back of your head that drives you and I think a lot of our guys have been using that Notre Dame game or the Ohio State game as that extra drive in the back of our heads and I think that pushes us to work harder.”

How much did those games fix in your mind that you were going to be back here this year?

“Uh, the last one for sure. Notre Dame game was tough, going down to Notre Dame first week. When you lose against a good team by a touchdown that’s tough, but that one against Ohio State is unacceptable and I think it had a huge impact.”

What does Ben McDaniels bring to your room?

“He brings a level of focus, a level of being more engaged on everything you do. Even during practice when you’re not in, taking reps, you’re on the sideline taking mental reps. You should be totally mentally exhausted at the end of practice because of how locked in you are. Just really recognition on a lot of things, but he’s definitely slowed the game down a lot for me.” 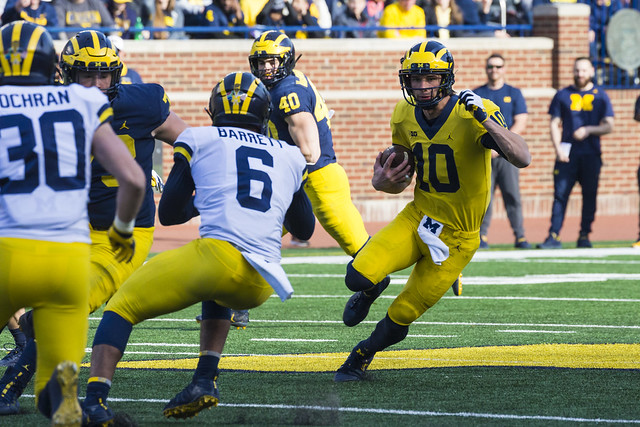 When was that officially 100%?

“That was a while ago. Shortly after the season I got the full clearance so we’re good.”

Do you think this offense needed this change?

“Yeah. I mean, I definitely think we needed more energy more than anything. Now we’re coming with a new energy.”

What’s your biggest adjustment in being a spread quarterback as opposed to the offense you ran here the first two years?

“There’s probably a number of things. I think it’s just a new dynamic not getting in the huddle, not seeing all the guys’ faces every play which, I mean, I don’t mind that, definitely. I think we’ve adjusted well but the first couple practices it definitely took a little bit to get used to that.”

How has the offensive line handled the move?

You’ve got a new quarterbacks coach. How has Ben McDaniels helped your improvement this year?

“He’s helped a ton. He also is a guy who brings a lot of energy and off the field I think all the quarterbacks are in a much better place mentally just as far as recognizing defenses and knowing our stuff and where to go with it. I think we’ve all gotten way better at that. It’s just something he brings to the table.”

That’s because of him, the recognition?

“Um, yeah. I’d say he teaches that in a very simple way that comes across.”

“Yeah, the defense is different guys but the same thing. They’re gonna be flying. I think we’ve replaced a lot of guys well. Obviously it’s really hard to replace guys like Rashan [Gary] and Devin [Bush] but the guys stepping in have got a chip on their shoulder and they’re all ready to go, so I’m excited to watch them.”

How solid of a grasp do you feel like you have of this offense right now? How much has been installed?

“I think at this point in spring ball we’re feeling good. Definitely a learning curve no matter what offense you put in the first couple days but I think the team’s handling it really well. It’ll be good now that we’ve got a bunch under our belt to come back during fall camp and really nail it in and get to know it.” 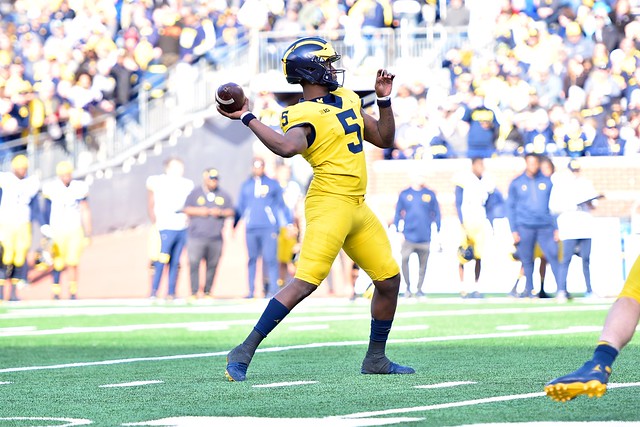 How quickly have you adapted to this offense with Josh Gattis?

And does it seem like it suits Shea and Dylan? You think it’s pretty much across the board?

“They understand it very well. We all do. We all just compete and have fun with it.”

How are you dealing with the competition? Is it getting frustrating at this point?

“I don’t know, I just be me. That’s why I have these wrist bands on. I’ll just be me regardless. Competition as well, we all just compete. Just having fun.”

What are the wristbands?

When did you start wearing those?

“Um, I just bought these like two weeks ago.”

You needed to remind yourself?

“I have reminders in my phone also. I’ve had reminders since high school: just be me, trust in God.”

Do you think you need that influence from the wrist band?

You said this offense is what you ran in high school, so what was your reaction when you found out that was going to be what--

“I was excited. I was like, ‘I’m just gonna put my foot on the gas and we’re gonna go’ but I just can’t go for it, [we] just have to do it as a team and we all came along and today showed it, what we have so far.”

How do you think you’ve handled it so far?

“I have improved myself over a lot since last year, my freshman year, but this year I just feel more comfortable what I’m doing and what am I seeing on the defensive side so I adapted well.”

How different is the quarterback’s job in this offense compared to last year?

You said that you’ve improved. Now that spring is about to come to an end, what parts of your game do you think you need to get better at as you move into next season?

“Get better at? I’ld say just moving my feet quicker and just thinking faster. That’s pretty much it, those two.”

How do you get better at thinking faster? Is that just more reps?

“Yeah, more reps, more mental reps when somebody else is in. Other than that it’s just watching film, studying what you did wrong that play and thinking about it before it happens.”

open it up, foot on the throttle.... speed in space.

To infinity and beyond!

CRISPed in the DIAG

Officially succumbing to excitement and overstated expectations.  I think Shae is going to have himself a year. Pray he stays healthy... Please sweet Jesus!

So easy to forget these are just kids in college trying to get by.

I though that was a great response. It sounds like his head is on straight.

Got to Admire Brandon Peters.

He will be a pro.

Who was that asking about Milton's frustration level and whether he needs reminders to be himself?

Maybe it sounded different in person, but the transcript reads like those questions were attempting to drum up some angst.

Did you feel handcuffed?

But the cuffs are off now?