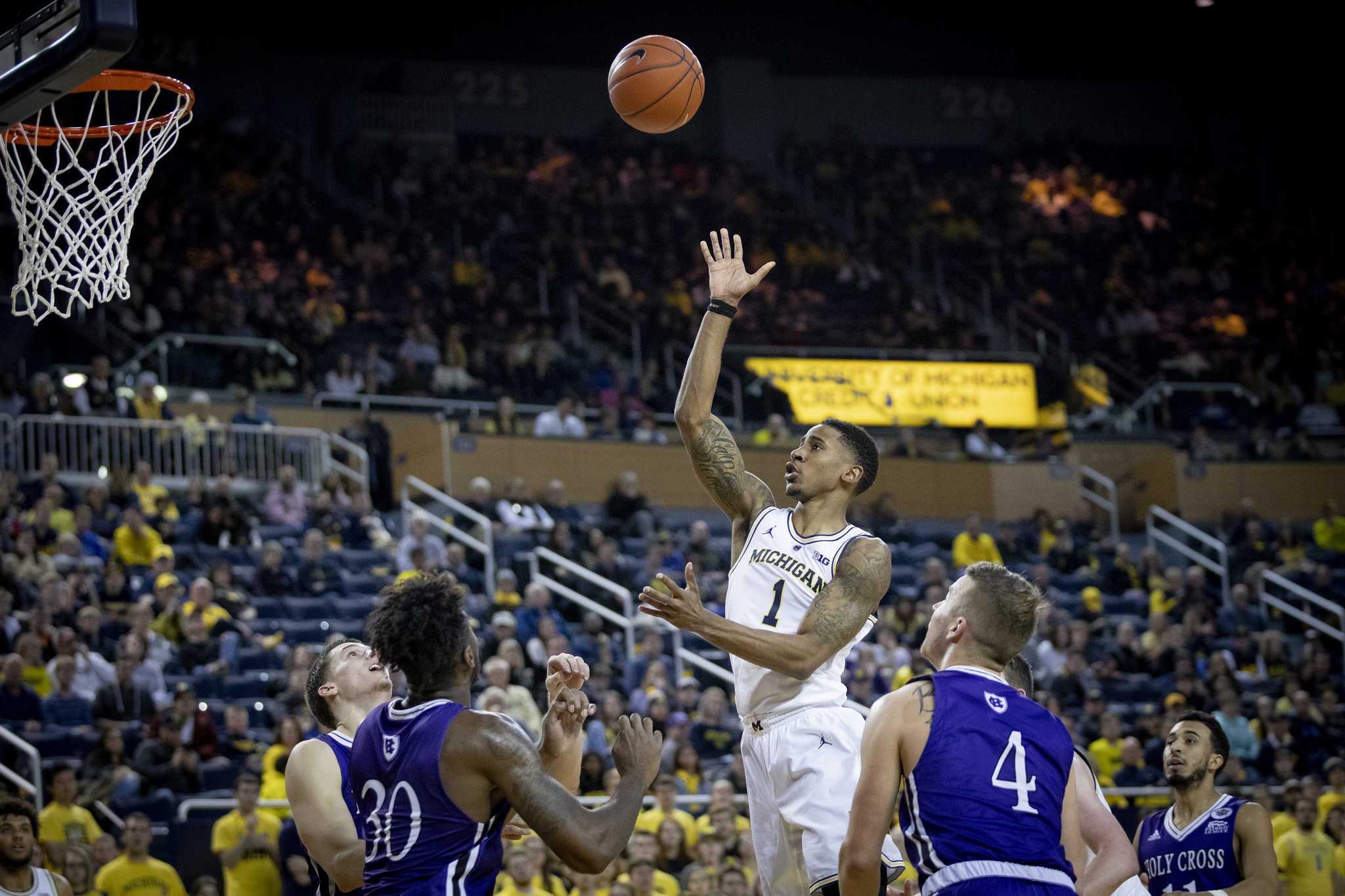 Early on, Michigan’s old conference nemesis Bill Carmody and his well-spaced Princeton offense gave the Wolverines some problems. After subbing out Jehyve Floyd, their starting center, and going five-out, the Crusaders went on a bit of a run: they hit four of their first five three-point attempts and led Michigan 18-9 at the second TV timeout. On the other end of the floor, the Wolverines were bogged down against a passive 2-3 zone and couldn’t knock down many of their open outside shots.

John Beilein’s decision to sub in Isaiah Livers at the five after Jon Teske and Austin Davis (who made a brief appearance) struggled to guard out to the three-point line changed the complexion of the game. Holy Cross’s offense completely ground to a halt, and while Michigan’s offense couldn’t find its rhythm until after halftime - the Wolverines shot just 5-24 in the first half - the Crusaders were completely stymied until the end. Behind sophomore wing Connor Niego’s 13 first half points (good for a career high), Holy Cross led 24-18 at the break before Michigan took over.

It was Ignas Brazdeikis who led the charge for the Wolverines. On three of Michigan’s first four second half possessions, Zavier Simpson set up the freshman: first with a drive and kick that led to a driving Brazdeikis layup, then with another assist for three, then with a pass to Iggy on the baseline for a dunk attempt on which he was fouled (before making both free throws). Shortly after, Iggy took a defensive rebound and went weaving through the Holy Cross defense for a coast-to-coast layup; on the next Crusader possession, he got a steal and was fouled on a layup attempt (before making both free throws). In the end, the talented freshman put up an efficient 19 points, 7 rebounds, and 3 assists - almost entirely after halftime.

After that initial barrage, Michigan put Holy Cross’s offense to sleep - they were outscored 38-13 in the second stanza and found it tough to get much of anything outside a few scattered layups off the patented Princeton backdoor cuts from the wing and a handful of post-up baskets over Livers. Teske finished with 5 blocks in 21 minutes of action, but it was a collective effort on that end: the top two scoring Crusaders from last season (Floyd and Austin Butler, who scored 26 points in the opener) combined for just four points, and Butler was held to 1-13 shooting. Michigan’s defense was locked in with its typically excellent shot contests, and the ability to switch everything with Livers at the five shut everything down. The three-point luck evened out too. After that 4-5 start, Holy Cross missed the rest of their eight attempts.

Despite the eventually comfortable 19-point margin of victory, Michigan’s offense was still an issue, even though it was better in the second half. Charles Matthews was the leading scorer for the Wolverines, putting up 20 points, although they came on 20 shooting possessions. His scoring early on kept Michigan in it - and he actually had more than half of Michigan’s first half points - and kept it up in the second half, with his customary floaters and mid-range jumpers. Most notably, he was 4-5 from the free throw line (as a team, Michigan was 17-21 and Iggy made all eight of his attempts). Michigan’s two starting wings were definitely the bright spots on offense.

Pretty much everyone else had a rough night. Livers’s activity on the glass generated a handful of extra possessions (and he was fantastic on the defensive end), but he was 2-8 shooting for his 7 points. It was much worse for the guards. Simpson was scoreless, though he did have seven assists to just one turnover; Jordan Poole hit a shot - his first and only of the season - but had two bad turnovers and only scored three points; Eli Brooks didn’t get on the board until a late steal and transition layup. Beilein went with a tight, seven-man rotation as Matthews played pretty much the entire game, and Z / Poole / Brooks / Iggy / Livers / Teske played between 21 and 31 minutes. Only two players scored in double figures, Michigan was just 3-19 from behind the arc against the zone, and the Wolverines were held below a point per possession for the second straight game.

These two tune-up games before a trip to Philly for the national championship rematch against Villanova essentially followed the same script: shoddy offense fueled by poor outside shooting, but phenomenal defense against an overmatched opponent. Michigan’s offense will probably have to pick it up against the Wildcats to have a chance at revenge in that game, but Villanova might not see a better defense all season - Holy Cross can probably attest to that.

[Box Score after the JUMP]

Watching Michigan reminds me of UVA last year - great defense, mediocre offense.  I hope they can find their shooting touch at some point this year.

I'm not really sure where this perception of UVA came from.  I guess it was their last game that just sticks with people?

UVA had a good offense and elite defense last year.

I'm still not too worried because a lot of guys that are missing shots can't remain this bad. Poole is 0-6 from three.

Also, at this point, Michigan has only played against zone.  That's fairly typical of games against vastly inferior teams that don't want to scout your offense.  It won't be typical for B1G teams to zone Michigan - although they might see it more than usual because this Michigan team is exactly the kind of team you want zone because they're a lot worse at shooting than they are running the pick and roll and their normal offensive sets. For the various Nebraska's and Northwestern's that do venture to play zone against Michigan, they may have some success.  But again, they can't continue to shoot this badly -  they're shooting 20% as a team!

It will be difficult sledding against that Villanova team. I just don't see us with enough offensive firepower to keep pace with them or UNC, especially if we can't hit 3's. Come February or March and it would be an equal contest because you know Johnny B coaches em good but with only two reliable scorers in Iggy and Charles, we can't expect to make it a good game, especially away from home. I'm really hoping Poole starts to play better, he is not having a good start to his season. Go defense?

So, it's going to be tough on the road against the national champion that beat the hell out of M?

And M is only going have 2 reliable scorers?    Interesting takeaways.

This is more a Izzo type team than a Beilein team. The question is when does Beilein adapt and discourage 3 pt shots. This team isn't going to shoot more than a 25% clip from 3 pt land and it will be closer to 20% over the course of the season. Just can't win with those numbers unless you are rebounding the misses at a high rate.

I know people love Poole. He has talent and can do some very nice things but he is more chucker than efficient shooter. This comment is going to surprise you but I'd rather have an open look set shot by Simpson than a shot by Poole. Why? Because Simpson is going to be at some set spot and Poole is going to be launcher some far away shots off balance. There may be a night where Poole is hot but cold nights will be more the norm.

You know who Poole sort of reminds me of slightly? Stu Douglas. Some nights is going to be 7 out of 10 and other nights 1 for 7.

I think that's a lot of extrapolation based on only 2 games worth of evidence.

Starting back court through 2 games, 2-17 from the field, woooooof.

Expected so much more from Poole .1-10 against 2 badly over matched opponents. 0-6 from 3, so 60% of his fg attempts have been 3s. Why wouldn't someone tap him on the shoulder and tell him he is way more athletic than these 2 bad teams, attack the rim!

Not sure how Z regressed back to early 2017 Z. It's like he forgot how well he played in March, attacking the paint and getting to the bucket when the defense didn't respect his size.

I think Poole is really good going to the hoop. If he can ever shoot 30% from 3 pt land he is going to be tough to stop. Kid has got all the talent you can ask for but the ball has to go into the basket otherwise it's just for show.

Z is what he is. He needs scorers around him to make him effective otherwise bogs down the offense. Beilein has constructed this very talented team but this team is going to shoot themselves out of the game. I was very encouraged by the free throw shooting. If that is closer to 70% then this team will be fine as long as the 3 pt shots stay under 10 or so per game.

Just take the 1st game. Livers shot well which was encouraging but the main guys who are supposed to be the better shooters from long distance have not been very good. Livers is the outlier sort of like Z. I think they are 9 for 42 from 3 pt land. Wow, and it could be worse.

This is at home too. I like what I see as long as this team understands it's limitations. It can win and win ugly. You don't have to be a great 3 pt shooting team to win at this level if you get to the foul line and rebound and play D. This team could be sort of like those OSU teams from about 5 years ago. Their names escape me but they were long and athletic and just attacked 24/7.

If I were Beilein I would take the non conference season to find out who can shoot somewhat consistently from 3 pt land and basically give them a semi green light to shoot but limit this team to about 4-6 3pt shots per half. If Poole is hot then let him shoot but short leashes on everyone.

Beilein is a great coach and he will adapt. He must be half the night wondering how did I ever construct such a poor 3 pt shooting team. This team can run and get to the hoop so it can clearly win. It's just going to have to be by a different style this year and probably next.

this summer i was really worried about this team's shooting.  we really need poole and brooks to be 40% plus from 3.  it ain't happening so far.  plus, we needed improvement from mathews and simpson from long range.  don't think that is going to happen.

this team will still spread the floor, but we will need to score easy 2s in bunches.  and that will be up to mathews and bradzeikus (sp) to do that.

i think that has to be the formula: great D and attack the rim on O.  different style but it can work.

If there's one thing .Belein makes me worry about, its teaching players to shoot. He's a great defensive coach, but when has he ever actually taught a player to, you know, shoot?! He has this High 3* from Jared Sullingers school --nothing came of it. His players just don't improve.

Also heard his teams get worse over the course of the year. 😉