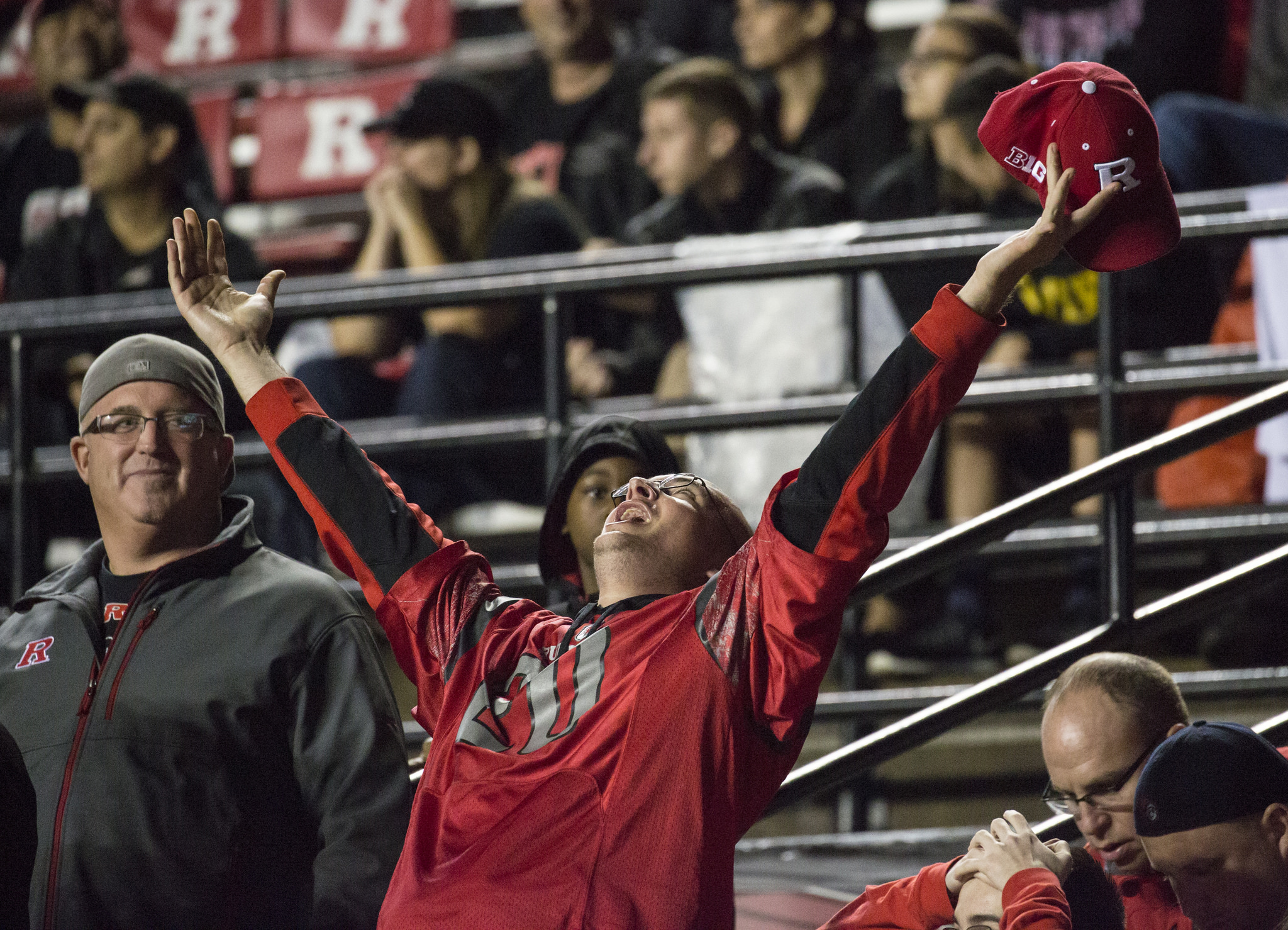 One of our photographers, Patrick Barron, has been trying to make fetch happen in our Slack for a little while now, except in this case "fetch" is actually a useful way of measure how grisly a blowout is. (Also we've discovered that SBN's Jason Kirk had the same idea a couple weeks before Patrick, so he's now Rutger Leibnitz.)

A rutger is when you have fewer yards in some aspect of the game than your opponent has points. For example, the 2018 Michigan-Michigan State game saw Michigan (21 points) hand MSU (15 rushing yards) a rushing rugter, at least by NCAA stats.

A Total Rutger, where you have fewer yards than the opposition has points, is a rare event. Total rutger events in the past decade of college football, with FBS matchups bolded:

Michigan-Rutgers 2016, TCU-Kansas 2017, and Louisville-FIU 2013 were all Double Total Rutger events, which sit in a subclass of the rutger: the Rutgers. Nobody has achieved the Triple Rutger in recent CFB history.

Congratulations to Mississippi State, which is the only team to both rutger and be rutger'd, and the only team to get rutger'd in a rivalry game. FCS-level Savannah State is the most generous rutger provider in all the land.

Rushing rutgers, aided by NCAA sack accounting, are stunningly common: about 600 rushing rutgers over the past decade. There have been approximately 200 passing rutgers. With about 8000 games in the data set, any particular game has about a 10% chance to be a single-phase rutger.

The Hoke. There is a level of statistical ineptitude even beyond The Rutger wherein you have more negative yards than the opponent has points, a special accomplishment indeed since the bar keeps getting raised the worse you are. This is only realistically possible in a single-phase rutger, and even then it's only because the NCAA counts sack yardage as rushing yardage. This is nonsense, of course, but that does not stop people from referencing historically grisly box scores that sport this nonsense. This is right and just and emphatically happened to Brady Hoke against Michigan State: 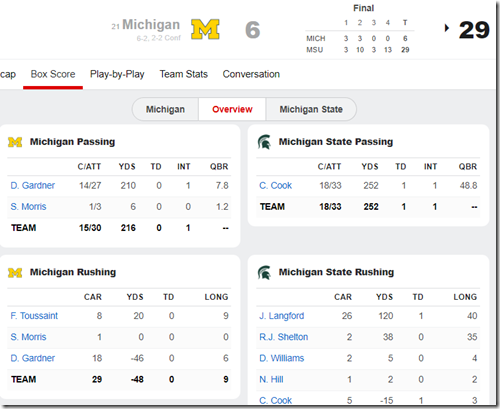 It is thus dubbed The Hoke. Hoke has the second-worst hoke of the last decade and is the only coach to manage it twice in a single season. The only other coach to show up twice is Mike Leach, who is doing it on purpose.

The bolded games are, incredibly, wins for the team that suffered a hoke.

The Autorutger. Occurs when you have fewer yards than you have points and will never ever happen. The closest approach to a total autorutger was Missouri's 42-13 win over Florida in 2014. Mizzou gained just 119 yards and achieved a remarkable 0.35 autorutger. The next closest autorutger also involves Florida, but this time they're on the good end after a 44-11 win over South Carolina in 2012 in which they gained just 183 yards. Will Muschamp, man.

Individual phase autorutgers are common enough that they don't warrant too much attention, but the Div By Zero Autorutger is a special case. This occurs when a team has zero passing yards and still wins. It's a list populated by the usual suspects and Louisiana Lafayette, somehow.

This concludes your introduction to the rutger.

TransferGo Ready to Enter the XRP Tec…
Why Affiliate Marketing For Seniors I…
A Wonderful Winter Ahead At One Snowm…
How to piece a quilt using a serger
Markets gaping down a bit, USMCA, Gun…

If Savannah State were a FBS team, the Rutger might need a new name.

It should be the Savannah State. Rutgers has not been “Rutgered” anymore than anyone else.

Savannah State is a team that has a fraction of the resources of a FBS team, let alone a P5 team. They show up regularly to get slaughtered because their school needs money and they're a guaranteed bodybag.

Rutgers is a team which should theoretically be competitive, as a P5 school in a fertile recruiting ground in the highest-paying conference in the land. They deserve the shame of the Rutger label far more than a FCS sacrificial lamb does.

The Rutger is named after Rutger because Rutger is in the B1G.  Somehow.  In no way should a B1G team get Rutger'd.  Not even Rutger.

So, in conclusion - Fuck Rutger and Fuck Delaney for bring Rutger into the B1G.

i still say that rutgers as a big ten team is some sort of weird-ass mass hallucination.

Get the hell out of my brain, Rutgers! You aren't real!

Not so fast my friend.  I think we need to give Rutgers a chance to play the 2018 Don Brown defense.  And in fact, the 2018 Scarlet Knights' season concludes with Wisconsin, Michigan, Penn State and Michigan State.  And then, an autopsy inside the Saudi consulate in Istanbul.

They were a marginal bowl team in 2014, and Michigan that year... wasn't. 2014 was the end of the run started by Greg Schiano; they'd had one good year under Schiano (11-2 in 2006) and a bunch of years where they won enough to get into a bowl game but struggled against any team with a pulse.

Schiano's successor Kyle Flood got himself fired in 2015 and Rutgers hit rock bottom in 2016 under Chris Ash. I'm not sure how much of that is Ash's fault, but I'm also not sure he can get them out.

Chris Ash still having a job is a Rutger in-and-of-itself.

They actually took a real step forward last year, and you can't blame 2016 on him with the way Flood destroyed the program.

The humiliating reversion this season, though, is tough to overlook. They might give Ash another year, but it looks like it's over.

If they fire Chris Ash, Rutger should hire Hoke.  I wonder if that would cause the universe to shift from expansion to contraction?

If Rutger hires Hoke this would cause a singularity event that compresses football statistics to a point of infinite points allowed while fielding almost no players during punting situations.

I believe this may help - the New Jersey media were equally puzzled that (a) Chris still had a job and (b) recently got an extension until some digging around found a very important clause in his contract.

And there is an accompanying question - why hasn't Rutgers bailed out from the Big Ten.

I wonder the same thing for Hugh Jackson.

Rutger even had a rushing rutger against howard in 2006 and again against norfolk st in 2007. i stopped looking after those two

That may be the only time I was too disgusted with our performance to care that we got screwed by the refs.

Darboh's catch was good for a first down on the last drive that would have set up a much easier game winning field goal but the ref decided to call it out of bounds.  Unfortunately, it doesn't take away the fact that Rutgers QB had about 9,000 yards yards passing in the first half alone.  It was about the most pitiful 26-24 game you'll ever see. 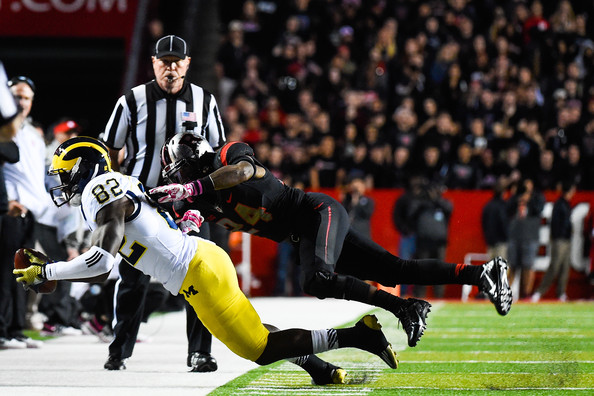 I remember that play. It may have been the most grotesque "process of the catch" BS ruling I've ever seen. I think Brady rightfully challenged the play and lost.

Not sure Weil's kick wouldn't have been blo