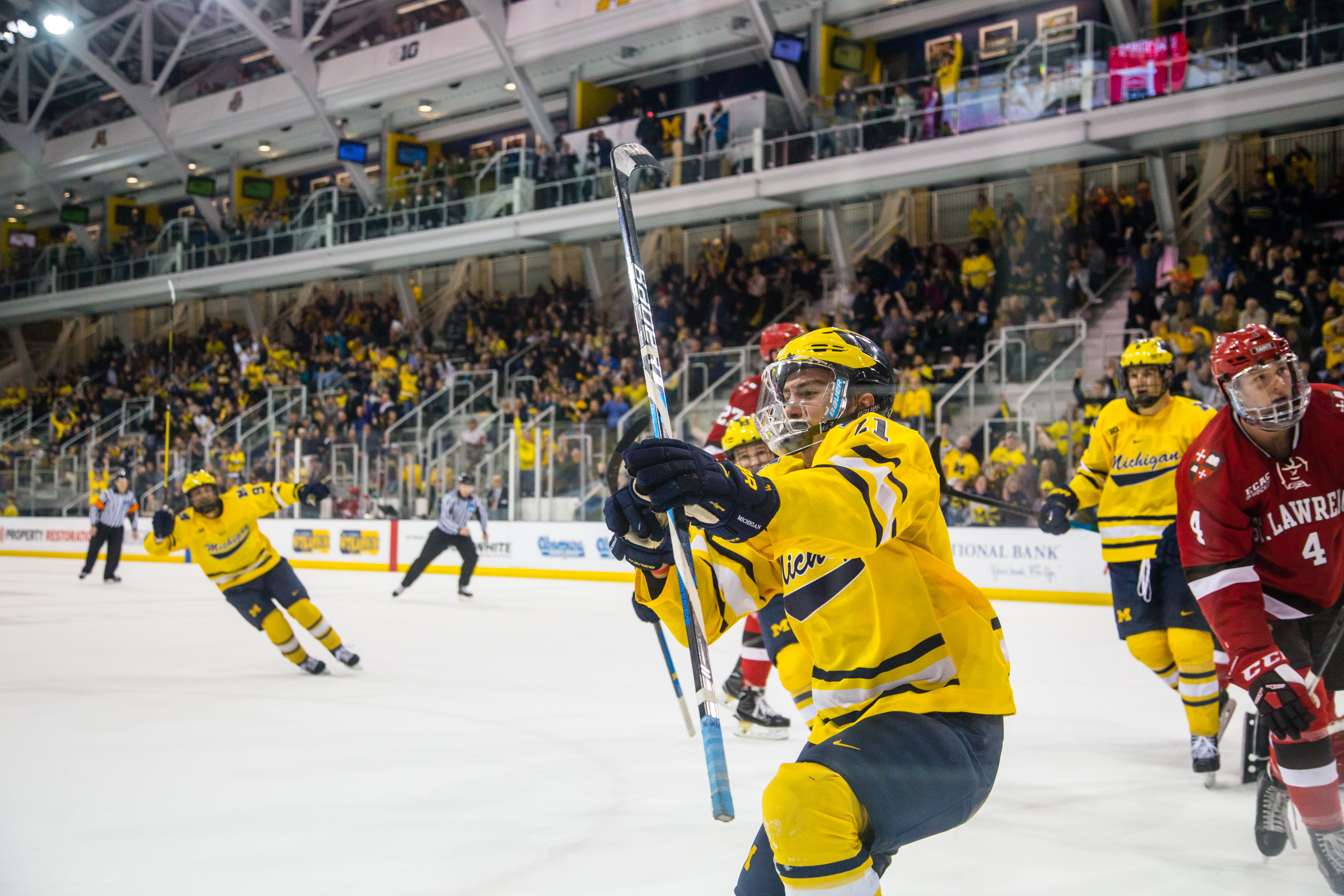 Analysis: Competition caveats apply. I hate having to say that, but it is true. After the first 10-15 minutes, Michigan dominated the puck. They controlled shots, cleared pucks, and forechecked well. However, St Lawrence didn’t put up a ton of resistance, and that was to be expected. Arthur Brey kept this game from being a six- or seven-goal game. This is what Michigan needs to do against inferior opponents. So, ‘check’ in that regard. I went into the game trying to keep an eye on the bottom couple of lines, and still didn’t see a whole lot of production. There were shifts here or there, but I wanted to see just a little bit more. Regardless, the Pastujov line looks great and the top line should be able to compete with the better lines in college hockey. Slaker fed Norris for the only even-strength goal. 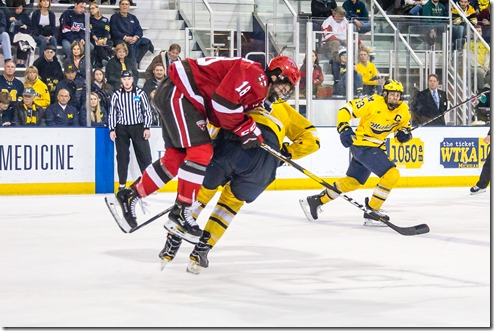 Analysis: Another iffy start defensively. No goals allowed, but the Saints were able to get into the slot in the first period and forced Hayden Lavigne to make a few saves; he was up to the challenge. After the first period, St Lawrence generated very little on net and not much more in the vague direction of the net. Michigan’s defense played like they were predicted to play in the preseason. They need a repeat performance tomorrow and then they’ll have a chance to take some shut-down momentum into an underrated series in the UP next weekend.

Analysis: Michigan generated four power plays and again scored on two of them. Slaker tapped home a loose puck on their first opportunity. After creating a myriad of attempts on net, Mike Pastujov also scored in the second period. Even when they weren’t scoring, the Wolverines were generating chance after chance. Just look at the numbers above. Yikes. That’s a blizzard. Competition caveats apply, obviously, but it took Michigan the entire year to starting creating on the man advantage last season. This is very much a +1 for this year.

On the flip side, Michigan took one penalty and only allowed a single shot on net. Even against less than stellar opposition, it is easy to commit silly penalties in the offensive zone or hit a guy out of frustration, etc. Michigan did not do that. One point of conversation in the Hockeycast was a need for improved special teams. Both units have turned in such upgrades. 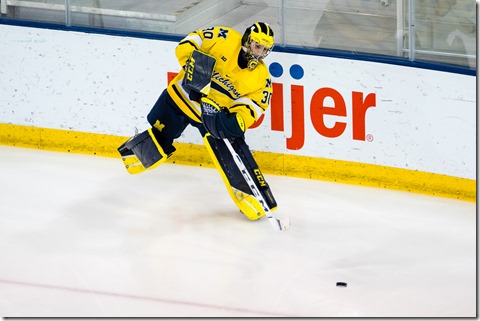 Sometimes as a goalie, part of a shutout is a good breakout pass. [Ryan McLoughlin]

Analysis: Yawn. Wake up, Hayden! Sorry. Hayden Lavigne started in net tonight and did not have a whole lot to do. Another slow defensive start weighted most of Lavigne’s action to the first 20 minutes or so. Several players got beaten in 1v1 scenarios and Lavigne made a handful of bail-out saves. He also diffused a 3v2 with a triple save. The Saints never posed a super serious threat to scoring, though. Even so, you can only stop the shots in front of you, and Lavigne did exactly that. Shutouts are a good accomplishment at any level and Hayden nabbed one of those tonight.

Analysis: Michigan gave up a 3v2 very early on in the first period and Hayden Lavigne made back-to-back saves and then ended the rush gloving a third. Will Lockwood led Michigan’s only OMR of the night when he broke in on a 2v1 shorthanded and lost the puck and he made a move through the slot. Other than that, both teams were very transitionally sound tonight.

CBD 2020: What to Expect + Our Top Pr…
The 10 Leading Blockchain Companies o…
How to Create a Winning Black Friday …
‘A Pound for a Poo’ in Stratford upon…
How To Stay Focused And Motivated In …
corsi
Nastyisland
hockey game breakdown
good defense
good offense
guess that's why they call them special teams wocka wocka