Hi, I'm not dead yet. The doctor situation and ensuing medical situation that I took time off to deal with last week is slowly but surely getting resolved. I may discuss it at a later date; I may not—I'm learning to let this stuff play all the way out before putting it out there. As always, thank you to Brian for being so understanding as I deal with this, to Seth and Adam and Alex for covering for me, and to all of you for your support. I'm catching up this week; I've got this post today, GIFs tomorrow, and long-overdue basketball preview content the rest of the week. — Ace

How To Kill Carpenter Ants
8 Ways To Turn Your Home Into Cash
Why Do I Have These Thoughts?
How Do I Care For Hydrangea Flower?
Virtual Field Trips 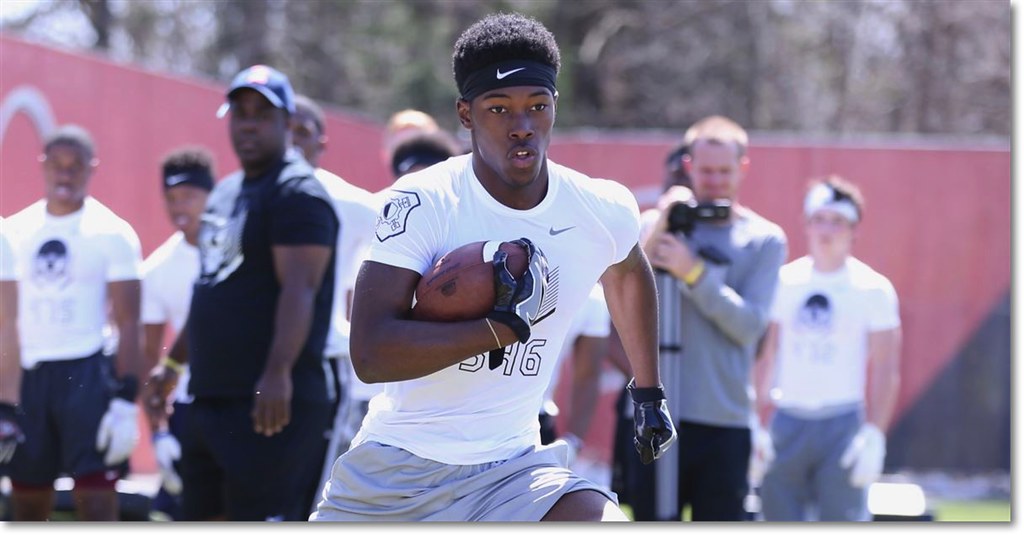 I'm very blessed and honored to announce that I have committed to University of Michigan #goblue pic.twitter.com/Kxj5X8PUMh

This looked inevitable from the moment Michigan offered; they were easily the best program to extend one to Haskins, who's impressed scouts with a very productive senior season thus far. This is how he celebrated his commitment, per Scout's 247's Allen Trieu:

Recent Michigan commit Hassan Haskins rushed for 159 yards and two touchdowns and scored on a fumble return on defense to help his Eureka (Mo.) team defeat Lindbergh on Friday. Haskins, a senior running back, has now surpassed 2,000 yards in his senior campaign.

While Haskins wasn't on the radar of most big-time programs, you can expect his rankings to start catching up to his production. He's the second running back in Michigan's 2018 class, joining Christian Turner, and the 15th commitment overall.

As you can see, the rankings have some catching up to do. While Haskins isn't a superlative athlete, which is going to cap his ceiling, he's almost certainly better than, say, the cursory two-star rating thrown out there by Rivals. The film shows a player who should at least be solidly in the three-star range.

[Hit THE JUMP for scouting, video, and the rest.]

The first scouting report I could find on Haskins sums up the current scouting take on him rather well. Rivals's Josh Helmholdt saw him go bananas in his first varsity start as a sophomore; he also came away with a pressing question:

Haskins made a statement in his first varsity game, carrying 39 times for 254 yards. The 6-foot-2, 195-pound sophomore is a bruising runner with excellent balance. Whether he has the top-end speed to be a high FBS prospect is the question.

And... that's all anybody published on Haskins until this fall, which is a bit surprising considering he rushed for over 1500 yards and 19 touchdowns as a junior. Helmholdt circled back around two years after his initial look, naming Haskins one of the Midwest prospects who'd boosted his stock midway through the season:

I “discovered” Haskins two years ago when I was in St. Louis covering other prospects and he happened to be on the opposing team. What caught my eye - besides his 254 rushing yards on what was supposed to be a good defense - was Haskins' punishing running style despite being just a sophomore. I questioned, however, whether he would develop the speed and agility necessary to be a Power Five recruit. Early season film, though, shows excellent progress in those categories.

I'm guessing Rivals will give Haskins a bump in the rankings in their next update.

Everything else comes from after Haskins's commitment, so you can all thank me for taking a week off now. Allen Trieu believes concerns about his athleticism are overblown:

Haskins is a big back. He runs with every bit of his size too. He is a tough, between the tackles runner with excellent balance. A taller back, he is able to get compact and knows how to take on contact. He does not go down easily and rarely on first contact. Some Michigan fans have raised concern about his 40 time, but the kid shows burst, and for a big back, shows niftiness in the hole and ability to slash and change direction. At this point, we do not know a ton about him as a blocker or pass receiver. He is physical as a runner and on his defensive film, so we can glean from that that blocking likely will come naturally to him. His ability to break tackles may be the first thing people talk about, but his change of direction is an underrated part of his game.

Helmholdt added some superlatives when giving an updating scouting report:

"Haskins is a late bloomer, but what he has always been a good high school football player," Helmholdt said. "It is only recently that he has matured into a Power Five caliber football prospect with the development of some physical tools; particularly greater quickness and agility. The balance, the vision, the toughness and the football IQ were there when I first saw Hassan play live more than two years ago."

His coach, meanwhile, provided a detailed outlook on Haskins's physical development to The Wolverine's Brandon Brown:

"Something that he can continue to get better at is his speed. That’s been part of the issue with him I think. He runs a 4.7 40-yard dash and that’s something he can improve on. His top end speed can get better and I know he’ll work on that," Sumner said. "He’s a three-sport guy so he’s never really focused on that. He does football, basketball and he also took second in the state last year in the high jump jumping 6-6. We train, and he does stuff throughout the summer, but he’s also taking care of his body and not overdoing it. I think once he gets to Michigan and just dials in to football, his top end is going to be extremely high.

"He has a special frame and has a lot of room to put weigh ton. He’s 210 pounds right now but his upper body can easily hold another 20 pounds. He can be 230 and will still be the same speed and he’ll still be able to do everything he does right now. I think his running style is perfect for what his body will be. His lower half is absolutely rock solid but his upper body does need to catch up."

That's almost certainly what Michigan's coaches foresee: a burly, between-the-tackles bruiser. His athletic upside may not be as limited as his current 40 time suggests, either. Helmholdt broke out an intriguing stylistic comparison given the last few weeks:

Comparison: Michigan fans wondering what they are getting in their new running back commit need look no further than their current leading rusher. Higdon has broken out this season as the Wolverines' top ball carrier in a multi-back rotation showing the toughness to run between the tackles and the quickness to hit the edge. Haskins’ running style is very similar and he does it in a bigger frame.

Sounds good to me.

If Haskins pans out, he'll be chalked up as a huge scouting win for this staff. Purdue is the only other Power Five school to offer, and they actually backed off after picking up a couple three-star backs over the summer. The rest of the list: Eastern Michgian, Illinois State, Indiana State, Memphis, Missouri State, Ohio, and Western Kentucky. Iowa and Mizzou gave him a look but have not extended offers.

One of the reasons Haskins has flown under the radar may be the prominence of his school. According to the Rivals database, Eureka has only produced three FBS signees since 2002, and even that trio was an outlier—all three signed with Mizzou in the 2003 class.

Haskins's much-discussed 40 time is listed at 4.74 seconds on his ESPN page. I believe that's a combine time, which would merit zero FAKEs out of five. As said above, Haskins certainly isn't a burner, but he's also not a plodding back, either.

While Haskins is still playing out his senior season, there are several single-game reels from this fall on his Hudl page, and they're worth a look to see his progression. Here's the aforementioned 159-yard post-commitment outburst against Lindbergh:

The first run on this reel, from a three-TD game against Pattonville, gives you an idea of his power:

Sophomore highlights, more single-game reels, and some hoops highlights can be found on his Hudl page.

PREDICTION BASED ON FLIMSY EVIDENCE

Haskins, along with Christian Turner, will have a crowded depth chart when he arrives on campus. Assuming no unexpected attrition, some combination of Karan Higdon, Chris Evans, Kareem Walker, O'Maury Samuels, and Kurt Taylor will form a committee next year, leaving little opportunity for a true freshman to get snaps unless one of them really outperforms expectations.

That likely means a redshirt, though you never know with this coaching staff. (Samuels recently burned his.) There'll be more opportinities the following year when Higdon's carries will need to be replaced; that's when there's a decent shot at being part of the committee, and that opportunity grows the following year when Evans will also have exhausted his eligibility.

Haskins could carve out a role for himself earlier as a short-yardage back, especially if he gets into that 220-230 pound range early on in his career. Beyond that, it's all about his ability to maintain his current athleticism while packing on muscle.

UPSHOT FOR THE REST OF THE CLASS

Michigan is up to 15 commits in a class that should reach the low 20s. Haskins closes the book on running back recruiting for this year. The most pressing needs going forward are at DT and WDE; they'll also look to add quality recruits at WR, TE, OT, OG, and S if the right prospects want to join up.

Here's the class as it currently stands:

How Do I Care For Hydrangea Flower?