[Ed-Seth: This being the 20th anniversary of the 1997 National Championship, Michigan historian Dr. Sap is taking us game-by-game through it. Previously: Those Who Stayed, The Hit, The Stop, The Captain’s Down, Vengeance]

Granted, it was Michigan-Michigan State. The battle for the Paul Bunyan Trophy. The battle for state bragging rights. Nothing more needed to be said, though if you checked out the articles folder above you’ll note there wasn’t any shortage of things being said from the beginning of the year. Michigan was undefeated. Michigan State was in its 3rd season under Nick Saban, and was demolishing opponents, rising as high as 11th in the country one week before hosting their biggest rival.

Problem was, the fever-pitched build up for this game took somewhat of a hit when the Spartans unexpectedly lost, 19-17, the week before to Northwestern. That meant #5, and 6-0 Michigan would now be playing #15, and 5-1, Michigan State. Not exactly the marquee national matchup that the networks had been anticipating but it didn’t stop ESPN’s College Gameday from paying a visit to East Lansing.

Lloyd didn't have a countdown clock for this game, nor was there any more than the usual bulletin board material. But Carr did have a sweatshirt, as Angelique Chengelis reported in the Detroit News:

Hanging on a mirror that each Wolverine player could not avoid seeing was a sweatshirt that read the ugly score and the uglier words.

"It said '28-25, Spartans beat Wolverines,'" U-M safety Marcus Ray said. "It was taped up there all week and we saw it. We just wanted to come up to Lansing and win this game."

[After the jump: THE JUMP]

Saban’s Spartans had also developed something of a program-wide shoulder chip, which manifested in the way they played: dirty as hell, not to put too fine a point on it. They held as a matter of course, hit you between the whistles, and hit you again after, daring you to do something about it because the refs sure as hell wouldn’t. True to form, Sparty committed a personal foul for unsportsmanlike conduct on the very first play from scrimmage. It would be an ominous sign as the Green and White would end up getting flagged 10 times for a costly 96 yards in penalties in this game.

Brian Griese looked sharp and as usual, Michigan had to settle for an opening-drive field goal to start the game. (Seemed like that was always the case during the DeBord years…)

The Spartans settled down on their next drive which featured a nice mix of passes to Sedrick Irvin and runs by their tailback. Not surprisingly, the Michigan D stiffened and MSU had to settle for a field goal. Instead of kicking for three points, Saban did his best “Intent To Deceive” impression and before you could say, “Sedrick ‘Swervin’ Irvin,” the Spartan running back caught a pass from the holder, backup QB Bill Burke, and pretty much walked in for the touchdown.

Secure the couches—this game and the crowd was about to get unhinged!

With the home team now leading, 7-3, the Wolverines were in a place they had never been before: losing and on the road. How would the maize and blue respond?

Well, not very stellar, at least initially. As the first quarter ended, Michigan was still trailing, 7-3 and to make matters worse, the offense went three and out to start the second quarter.

But once again, it was the defense that pulled this team up by their collective boot-straps. This time it was Marcus Ray making the big play as he ended another successful Spartan drive with an interception at the UM 36-yard line.

Not surprisingly, the offense couldn’t capitalize on the turnover, again—shocker!

On the ensuing MSU possession, the Spartans eventually punted to Charles Woodson, but during his return, Michigan committed a clipping penalty and that meant the Wolverines would have to start the drive on their own 5-yard line.

Hadn’t we seen this before? Losing. Playing not so much on offense. Starting with poor field position, and oh ya, with your in-state rival’s stadium roaring at the top of their lungs while you looked 95-yards away from their endzone.

Second play? Another run, but this time Howard sprinted 51 yards down the left sideline before he was caught from behind by the Spartans' Ray Hill. Hill knocked the football loose, but Howard maintained possession as he fell at the MSU 33-yard line. 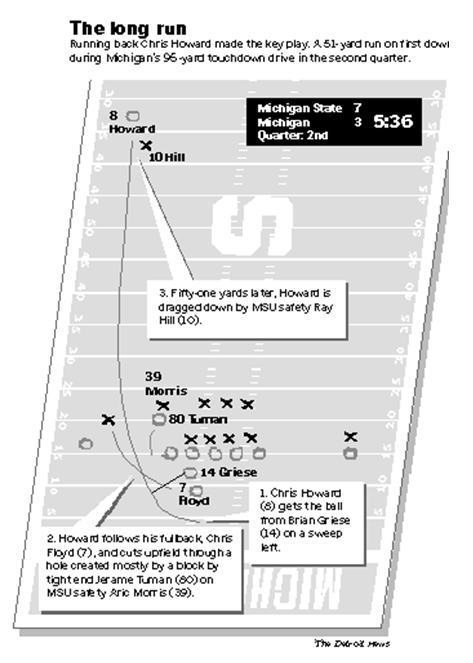 A few plays later, Griese scored on a QB-sneak to cap an 11-play, 95-yard drive, all on the ground, to give the Wolverines a 10-7 lead. "That was Michigan," said Howard, smiling afterward, "and that was a Michigan drive."

Lloyd Carr recognized the significance of that play and the drive. "I think that was the turning point of the game. It got us out of a bad situation. It was a tremendous drive, well executed."

As the first half ended, it was clear that the Wolverines had caught lightning in a bottle and now the crowd was hushed as they waited for the other shoe to drop.

Before the third quarter started, some of the 70 MSU players and 10 coaches from the 1987 Rose Bowl championship team that were introduced at halftime walked over to the MSU bench and tried to fire up some of the Spartans before the second half.

It worked initially. Michigan started the third quarter much like they did too many DeBord-era drives: run, run pass, punt.

With MSU beginning their first drive of the second half at midfield, it looked like the green meanies would have something to cheer about. Andre Weathers made sure that didn’t happen when he stepped in front of a Todd Schultz pass for Michigan’s second interception of the game. 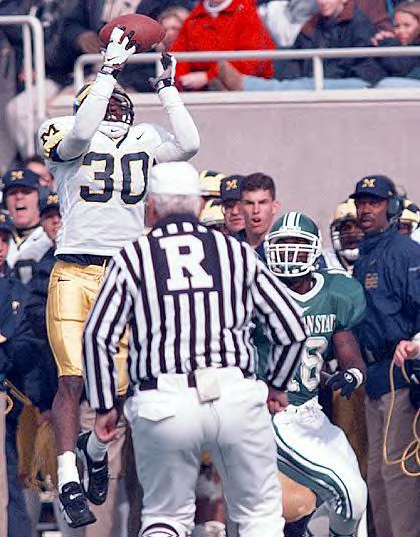 Andre Weathers picked off this gift of a pass against MSU, foreshadowing a similar INT

that would be “gifted” to him a few weeks later against OSU. (Photo: The Detroit News)

This time, Michigan took advantage of the turnover and eventually got down inside the red-zone with a 1st and goal from the MSU 8-yard line. Shockingly and alarmingly, the Michigan offense was unable to deal the Spartans the knockout blow needed to put the game away. A 30-yard Kraig Baker field goal put UM up, 13-7, but this was still a one-possession game. Spartan Stadium—the same that got so quiet at 10-7, now smelled blood; the crowd was back into it.

On the ensuing kickoff, Jay Feely booted a Foug Special to the 1 yard line right in the corner. Michigan State got the ball at the 18. Sam Sword blew up a power run on 1st down: 2nd and 9. The MSU was flagged for an illegal procedure by trying to get a slot motion receiver a running start at the line: 2nd and 14. Now Saban called a draw, DT Josh Williams got mid-shift, and Irvin piled forward 7 yards: 3rd and 8. MSU went to a 3-wide look, Michigan countered with a nickel that put Woodson in the slot. From this State ran a flood, with Schultz rolling to the short side and the slot receiver coming across the formation. James Hall flew by the right tackle, drawing a holding flag, and Schultz had to throw it out of bounds. But the route combination worked. They’d come back to this.

Later in the 3rd quarter, the Spartans found themselves in the same spot: 3rd and 9 from the 20 yard line. Again they saw Woodson lined up over the slot, and figured this was a good time to test Michigan’s levels coverage again. Again Hall blew by his blocker and drew a hold (though this time it wasn’t flagged). Again Schultz had to drop back way further than intended and the routes fizzled out. He threw it out of bounds. It didn’t make it.

"They threw the same play at me twice, I couldn't believe it," Woodson said. "I was kind of insulted. Any time the ball comes my way, I feel I should make a play, somehow, some way."

Amazingly, Michigan could not convert the Woodson pick into points. As Baker missed a field goal at the end of the third quarter, it was still a 13-7 Wolverine lead.

After Woodson picked off Schultz again to start the 4th quarter, Michigan finally was able to make the Spartans pay when Howard dove in from the 2-yard line to make the score, 20-7, good guys.

On the next drive, Michigan State changed QBs, but the results were not much better. A three and out by the Spartans set up the Wolverines for the final points of the game—you guessed it, another Baker field goal.

DiAllo Johnson’s pickoff of another errant Spartan pass with 15 seconds remaining in the game closed the books on another Michigan victory.

The 23-7 win was keyed by six Wolverine interceptions and the fact that once again, Jim Herrmann’s defense after seven games had not allowed a touchdown in the second half or even a point in the fourth quarter. Umm…WoW!!!

After the game, Michigan Coach Lloyd Carr showed respect for Irvin’s abilities, even though he mispronounced his name: "We felt Sedrick Irwin was the guy we had to stop."

Afterwards, while it was great to be a Michigan Wolverine, through the clouds of the remaining four games on the schedule the summit was now visible and in sight. Coach Carr reminded the team to not lose their focus. Yes they were a talented and cohesive bunch, but they could not be distracted on their ascent to the top of the mountain. There was too much at stake.