10. Paul Scholes
The Manchester United star is one of the quietest footballers off the pitch and, due to his great modesty and respectful private life, Scholes has never received the recognition he deserves.

He has achieved astounding success in his time at United, and we have seen him at his peak ever since the turn of the century. His remarkable passing ability is one of his greatest attributes, but he possesses many others.
The Ginger Prince's lifestyle and mastery on the pitch is admirable and every single aspiring footballer should model themselves on him, whether it is his playing style or dignity.
The game will never be the same when Scholesy finally hangs up his boots for good.en.wikipedia.org/wiki/Paul_Scholes
9. Ronaldo
One of many talented Brazilians, Ronaldo Luis Nazario de Lima has spent his career scoring goals and scaring defenders and goalkeepers alike. 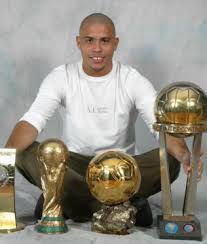 The well-built, rapid forward scored a whopping 280 league goals in 384 club matches, starting with his first team Cruzeiro, all the way through his time at PSV, Barcelona, Inter Milan, Real Madrid, AC Milan and finally Corinthians.
One of only three players ever to win the FIFA Player of the Year award three times, he is also his country's second-highest goalscorer of all time, behind only the great Pele.
He has long been regarded as one of the best footballers of all time, and rightly so, too.en.wikipedia.org/wiki/Ronaldo
8. Thierry Henry
Arsenal legend Thierry Henry is arguably the best striker to ever play in the Premier League, and has been honoured for this with a statue being erected outside the Emirates Stadium. 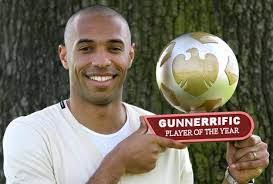 In his time as a Gunner, the ex-Juventus striker became the club's all-time top scorer, with 226 goals for Wenger's men in all competitions. Although he played a huge part in the 'Invincibles' unbeaten league season in the 2003/04 campaign, along with FA Cup successes, he never won the Champions League with Arsenal despite reaching the 2006 final which they lost to Barcelona.
Henry went on to join the Catalans in 2007 and finally got his hands on a Champions League winners' medal while at the club, making him one of the most decorated players we've seen in the modern game.en.wikipedia.org/wiki/Thierry_Henry
7. Kaka 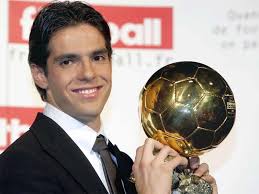 Another Brazilian in the list, Kaka has faded since his mega-money move to Real Madrid in 2009, which is a great shame as he should be in his prime.
Despite this, he still treated us to some sublime scenes during his time at Italian giants AC Milan. 2007 was certainly his most successful year in football - he scooped both the Ballon d'Or and FIFA World Player of the Year awards after conquering the UEFA Champions League with his club.
These are only some of his career highlights, and hopefully we will see him return to form in the latter stages of his career.en.wikipedia.org/wiki/Kaká
6. Xavi
A modern-day footballing icon and Barcelona legend, Xavi epitomises all that's great about the game. 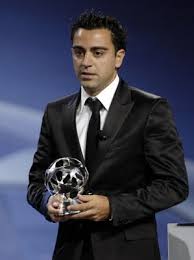 With brilliant technique, great awareness and an astonishing eye for a pass, in addition to his almost unmatched passing ability, the Spaniard really is the perfect role model.
On top of this, he is also a very modest man, giving a lot of credit to his team-mates with great respect for his colleagues. Once under-rated, believe it or not, the Barca playmaker has been nominated for many individual awards on numerous occasions along with a huge array of club successes.
Xavi made his club debut in 1998, and has never looked back since. He is also an integral part of the Spanish national side that has won back-to-back European Championships and one World Cup, making 119 appearances to date for his country. He will go down as one of football's legends, being at the heart of both probably the best club and national teams the sport has ever seen.
5. Andres Iniesta
To me, Andres Iniesta is the most technically gifted footballer to play the game in recent times.
With a first touch to die for and dribbling ability people can only dream of having, he can also play incredible passes for his team-mates. Still just 28, he is in his peak years, and possesses more medal than most players will never even feel possible to achieve.
Five - soon to be six - La Liga titles, two Copa del Reys, five Spanish Super Cups, three UEFA Champions League winners' medals, two UEFA Super Cups and two FIFA Club World Cups: the list is breathtaking.
Add to that one FIFA World Cup and two European Championships with the Spain national side, too.
Iniesta scored the all-important goal to ultimately win his country the World Cup, whilst receiving the 'Player of the Tournament' award at both Euro 2008 and Euro 2012. The individual awards are staggering and are too long to list.
In my eyes, he is the best footballer on the planet, and has been since 2009. 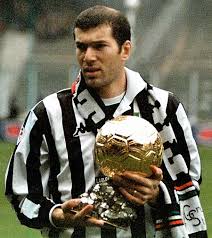 4. Zinedine Zidane
Outstanding would be one apt word to describe Zinedine Zidane's career.
At one point the most expensive footballer on Earth, the Frenchman was without a doubt the best player in the world at the start of the century.
Zizou scored in two World Cup finals, tasted glory at Euro 2000 and scored the greatest goal in Champions League history with his mind-blowing left-footed volley against Bayer Leverkusen in 2002.
A three-time winner of the FIFA World Player of the Year and with one Ballon d'Or to his name, he is surely the best talent his country has ever produced.
Unfortunately his career ended on a low: despite scoring in the 2006 FIFA World Cup final against Italy, he infamously head-butted Marco Materazzi and will no doubt be remembered for this, but also the jaw-dropping moments he produced most weeks for his clubs.
3. Cristiano Ronaldo 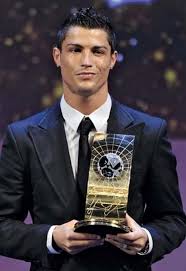 Possibly controversial to some only having Cristiano Ronaldo in third-place, the extremely talented Portuguese winger has not been out of the limelight since he joined Manchester United from Sporting Lisbon back in 2003.
Ronaldo became one of the most prolific wingers seen in the Premier League era, and his goals rocketed United to three successive Premier League titles, one UEFA Champions League and an FA Cup back in his first year at the club.
Since moving to Real Madrid in 2009 for a world-record £80m, he's scored goals for fun at the Bernabeu, with a quite ridiculous 189 goals in 187 games and with many more to come I'm sure.
The big man also has many individual honours to add to his sparkling collection and was the first player to ever win all four main PFA and FWA awards in one year during his time at Old Trafford.
2. Ronaldinho
The third Brazilian on the list, this magician could do anything he wanted with a football at his feet.
In his Barcelona tenure, Ronaldo de Assis Moreira lit up the globe with some mesmerising, wonderful displays of skill and quality in the famous Catalonian kit. 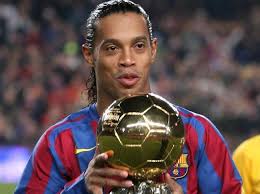 He was voted in the UEFA Team of the Year three years running, in correlation with his three successive appearances in the FIFPro World XI. The former PSG man had the football world at his feet, jumping to global fame through his appearances for the Brazil national team, also known as the 'Samba Boys' and also Barcelona and his Nike sponsorship deal.
The scorer of magnificent goals, most notably his incredible over-head kick against Villarreal, his outside-of-the-foot effort against Chelsea that left Petr Cech stuck in the mud or his marauding run in El Classico, where he made world-class defenders and Iker Casillas look invisible.
At the heart of the Barca team, Ronaldinho was an unstoppable force - fast, strong, skilful and quick-witted - a defender's worst nightmare.
A true footballing legend.
1. Lionel Messi
Simply put, Lionel Messi is just astonishing.
Almost everyone has run out of superlatives to describe this 25-year-old, who just seems spend his career shattering records week-in, week-out. He is the first player to score 50 goals in one La Liga season; the first player to score five goals in one UEFA Champions League match; the first player to top-score in four consecutive Champions League seasons; the first player to win four consecutive Ballon d'Or awards; Barcelona's top-ever scorer, and he holds the record for the most goals scored in one calendar year with 91 goals for club and country.