Today Rob Thirlwell delves into cricket’s history. I learned something from reading this …

The First World War was a horror that brought devastation to millions around the World and the British Army alone lost just over 700,000 men. As Britain geared up for war young men queued up to enlist, those who could not fight were put to work producing arms and professional Cricket ceased. Although some counties held out longer than others, pressure from some of the game’s most influential figures forced the cessation of the County Championship in the twilight of the 1914 season. The resilience and bravery of the soldiers on the front line is rightly held up as one of the most striking examples of human endurance, yet the important role of people on the home front cannot be underestimated. The vital role played by professional cricketers and the sport’s organisers is often overlooked. This dark period of history saw so much bravery that it is perhaps understandable that the support of our great game has slipped through the cracks. In this article I hope to honour its contribution.

Many county grounds were offered to and utilised by the Army either to house supplies or soldiers. In the early stages of the conflict the Oval was requisitioned by the War Office and the Long Room at Lords became a workplace for men and women who produced horse nets for the front. Yet, the most striking transitions occurred at Trent Bridge and Old Trafford as both pavilions were converted into hospitals to house wounded soldiers. The hospital at Old Trafford functioned on a smaller scale in comparison to Trent Bridge. In its first year 220 men were treated in the grand pavilion in Manchester. The ladies pavilion at Trent Bridge was transformed into a Voluntary Aid Detachment hospital, which in the beginning had 36 beds. By the end of the War the hospital had grown and was able to house over 200 patients. The cost was huge, but the financial generosity of the local Freemasons and Nottinghamshire Chairman, J.W. Hind allowed the pavilion to treat the 3,553 soldiers that came through their doors.

Some grounds also played a role in the rehabilitation process of convalescent soldiers. Whilst many wounded soldiers attempted to play cricket as a way to build up their strength, many found the sharp movements far too arduous. So it was that the ancient pastime of stoolball, which originates from Sussex, was used as a substitute to cricket. The game is very similar to cricket in its design, though not quite as strenuous. Two shoulder high wickets stand 16 yards apart from one and other and they are about shoulder height. The bowler uses a ball that is slightly larger than a cricket ball and throws it under arm on the full toward the batsman who uses a wooden bat, shaped like a frying pan. The batsman’s aim is to defend his ‘stool’ or stumps, for each ball he survives he scores a point. That the game requires no running from either the batsman or bowler made it the perfect pastime for injured soldiers. The idea of playing stoolball was floated to the MCC by Major W.W. Grantham of Lewes. His son had been wounded in France and he wanted him to be able to play sport again. Stoolball’s appeal was soon recognised by the MCC and a game took place at Lords in the summer of 1917. The money raised from the day provided stoolball equipment for military and naval hospitals. 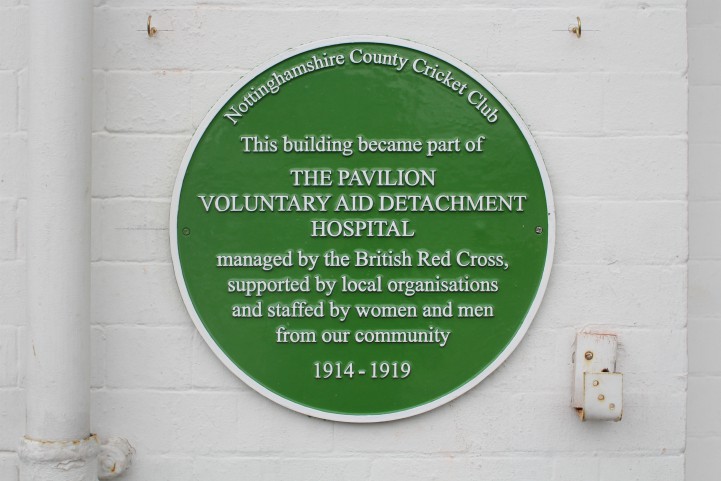 The MCC also allowed Lords to be used for baseball in order to entertain the public. The game was played between an American team and a Canadian team, and was viewed by over 8,000 people. The sport was unfamiliar to many spectators, yet The Times reported that the game sparked interest for many Londoners. The prospect of baseball being played on the historic cricket pitch was met with almost no objections, instead, a game adored by Britain’s allies at war was embraced with open arms. The gate receipts were donated to the Canadian Soldiers’ Widows and Orphans Fund. Once again Lords was being used to help those affected by the War.

It was not only on the home front that cricket played a vital role. Thousands of professional and amateur players showed valour on the field of battle and today their names decorate the war memorials that hang in clubhouses up and down the country. When war broke out in 1914 professional players were put under great pressure to enlist. W.G. Grace wrote to the Sportsman requesting that all fit and able first-class cricketers “come to help their country without delay in its hour of need.” Grace spoke as a man too old to fight. It would not be him who would have to face the roar of machine gun fire yet, his plea was heard. Cricket’s response was emphatic; by May 1915 over 2,000 members of the MCC had enlisted. The response from the cricketing elite was so notable that some members of Hampshire’s committee proposed the creation of a cricketer’s corps. Despite support from the MCC and the War Office the plan was ultimately scrapped. The power of sport as a recruitment tool was striking; the idea normal men could march into battle shoulder to shoulder with their sporting heroes proved a great incentive for normal members of the public to join up. Nottinghamshire’s Arthur Carr responded to his call to arms during a game. He declared he would face “one more over” before sacrificing his own wicket.

Counties actively encouraged their players to enlist. Sussex financially supported all their players who had enlisted and Kent went as far as to ask their players why they had not joined up. The persistence of counties in pushing their players to sign up demonstrated that they were very aware of their role in assisting the War Effort. This seems a slightly paradoxical line of thought. If counties were pushing their best players toward the armed forces they simultaneously ran a larger risk of losing them to either death or injury. Counties felt more responsibility to support the war effort, than their own aspirations for cricketing success after the War.

As the conflict raged Britain looked toward its national game for support. Cricketers of all abilities and backgrounds rushed to enlist and set the example for their fellow countrymen however, the selflessness of clubs and counties across Britain ensured cricket’s role in the war effort ran much deeper than just the brave men who swapped bats for rifles.

The post No Time To Play Games: Cricket’s Contribution To The British First World War Effort appeared first on The Full Toss.